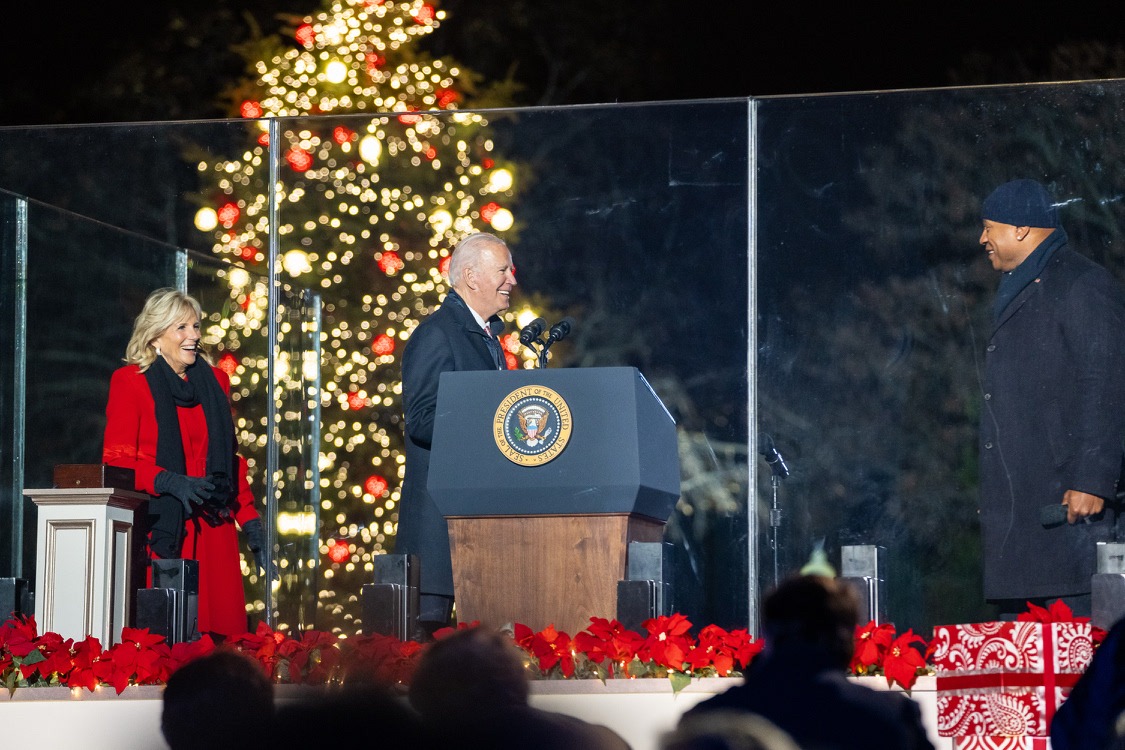 “As Democrats seek to reach out to Latino voters in a more gender-neutral way, they’ve increasingly begun using the word Latinx, a term that first began to get traction among academics and activists on the left,” Politico reports.

“But that very effort could be counterproductive in courting those of Latin American descent, according to a new nationwide poll of Hispanic voters.”

Former Sen. David Perdue (R-GA) kicked off his campaign for Georgia governor blaming Gov. Brian Kemp (R) for his loss in the U.S. Senate race in January and claimed Kemp gave Joe Biden “free rein.”   Said Perdue: “Look, I like Brian. This isn’t personal. It’s simple. He has failed all of us and cannot win in November.”   Perdue claims this isn’t “personal” but it will become personal very quickly.

“In the months after President Donald Trump lost the November election, lawyer Sidney Powell raised large sums from donors inspired by her fight to reverse the outcome of the vote,” the Washington Post reports.

“Records reviewed by The Washington Post show that Defending the Republic raised more than $14 million, a sum that reveals the reach and resonance of one of the most visible efforts to fundraise using baseless claims about the 2020 election. Previously unreported records also detail acrimony between Powell and her top lieutenants over how the money — now a focus of inquiries by federal prosecutors and Congress — was being handled.”

NORTH CAROLINA SUPREME COURT. North Carolina Supreme Court Justice Robin Hudson announced this week that she would not run for re-election, though even if she’d sought and won another eight-year term, she’d have only been able to serve another year because she’d soon hit the state’s mandatory retirement age of 72. Another Democrat, however, state Court of Appeals Judge Lucy Inman, had already been preparing to run for Hudson’s seat and confirmed her plans following the news of the justice’s departure.

Democrats currently hold a 4-3 edge on the Supreme Court. In addition to Hudson’s seat, they’ll also be defending Justice Sam Ervin IV, who has said he’ll run again in next year’s partisan contest.

ALABAMA GOVERNOR / U.S. SENATOR. Republican Lynda Blanchard will reportedly drop her bid for Alabama’s open Senate seat and instead launch a campaign to challenge Gov. Kay Ivey in next year’s primary, according to unnamed sources who spoke with CNN. Blanchard, a wealthy former ambassador to Slovenia under Donald Trump, has been publicly considering such a switch since September in the face of persistent low single-digit polling despite $5 million in self-funding.

Trump himself has apparently been urging Blanchard to make the move out of personal pique with Ivey, though this time, it’s not about the Big Lie. Rather, CNN says, Trump blames Ivey for the cancellation of a July 3 rally he wanted to hold in Mobile.

MASSACHUSETTS GOVERNOR. Labor Secretary Marty Walsh, who’s reportedly been considering a bid for Massachusetts’ open governorship, declined to rule out a campaign in a Friday interview with CNN, saying only, “I’m focused right now on what I’m doing here at the Department of Labor at the current moment.” Prior to joining Joe Biden’s cabinet in March, Walsh served as mayor of Boston for just shy of two terms, first narrowly winning office in 2013, then easily securing re-election four years later before stepping down earlier this year.

Another Democrat, New Bedford Mayor Jon Mitchell, also isn’t ruling out the race, saying in a statement, “I love the job I have. If I intend to do something different, I’ll let you know.”

RHODE ISLAND GOVERNOR. State House Minority Leader Blake Filippi, who was reportedly “under pressure” from fellow Republicans to run for governor, has announced that he will instead seek re-election. So far, the only notable Republican in the race is David Darlington, a former member of the Rhode Island Bridge and Turnpike Authority, while Democrats have a busy multi-way primary.

Kim’s unexpected strength may in part have come thanks to an endorsement from the nonprofit created by Andrew Yang, who helped popularize the idea of a universal basic income that Kim vocally supported. Kim may have also benefited from the sizable Korean American population in California’s 34th District, dark blue turf located in downtown Los Angeles that includes the neighborhood known as Koreatown. Around 43% of the district traces its origins to Mexico, as Gomez does, while about 8% are of Korean ancestry, making this the most heavily Korean American district in the country, though these demographics could shift in redistricting.

NORTH CAROLINA SEVENTH CD. Republican state Rep. Jon Hardister, who’d been considering a bid for North Carolina’s open 7th District, has announced that he will instead seek re-election. McClatchy reporter Danielle Battaglia suggests that Hardister’s decision “could be a sign” that former Rep. Mark Walker, who is currently trailing in the polls in his bid for Senate, might drop down to wage a comeback campaign, a prospect Walker said last month he was considering. So far, no notable Republicans have entered the race for the 7th, safely Republican turf that would have voted 57-41 for Donald Trump.

NEW HAMPSHIRE FIRST CD. Sophomore Democratic Rep. Chris Pappas announced on Friday that he’ll seek re-election next year, despite an overt Republican effort to target him in redistricting.

Last month, a committee in New Hampshire’s GOP-run House advanced a new congressional map on a party-line vote that would make the most radical changes to the state’s district lines in 140 years. Following the 1880 census, when the Granite State dropped from three districts to two, mapmakers have consistently split the state between an eastern 1st District anchored by Pappas’ hometown of Manchester that includes the Atlantic coastline and a 2nd District that takes in the state’s more sparsely populated western and northern portion—a historical divide you can see illustrated in this animated GIF.

Under the GOP’s new map, however, the 2nd District would now envelop the 1st, running along the state’s entire western border with Vermont and the entire eastern border with Maine, all the way down to the Atlantic ocean. The goal is to make the 1st as red as possible: Under the current lines, it backed Joe Biden by a 52-46 margin, but once Republicans finish gerrymandering, it’ll be transformed into a seat that would have voted for Donald Trump 50-48.

That’s by no means unwinnable for Pappas, though it will make an already difficult midterm race that much harder. Republicans, unsurprisingly, have been salivating at the prospect of retaking this seat, and a number of candidates have been running here for some time in anticipation their colleagues in the legislature would upend the map. The top prospects include former TV reporter Gail Huff Brown (the wife of former Massachusetts Sen. Scott Brown) and former Trump aide Matt Mowers, who as the GOP’s nominee in 2022 lost to Pappas 51-46.

OHIO FIRST CD. Democrats in both D.C. and Ohio are trying to persuade Cincinnati City Councilman Greg Landsman to challenge Republican Rep. Steve Chabot in the 1st Congressional District, reports Cincinnati Enquirer columnist Jason Williams, and Landsman hasn’t ruled the idea out. Landsman acknowledged the recruitment efforts but would only say, “I’m focused on helping with the transition to a new city council starting in January.” Williams adds that Hamilton County Commissioner Alicia Reece has also been weighing a campaign, though she “declined comment” on the matter.

Under the GOP’s new map, the 1st would have voted for Joe Biden by a narrow 50-48 margin, making it slightly bluer than the previous version, which backed Donald Trump 51-48. However, the district remains badly gerrymandered, linking the city of Cincinnati to deep red Warren County via a slender isthmus just one mile wide while selectively portioning off outlying bluer chunks of Hamilton County (where Cincy is based) to two other deep red districts.

TEXAS THIRTY-FIFTH CD. Former San Antonio Councilwoman Rebecca Viagran looks poised to enter the race for Texas’ open 35th Congressional District, saying she’s “seriously considering” a bid and has “an announcement” planned for Dec. 11. Viagran would be the first notable Democrat from the San Antonio area to enter the race for this safely blue seat; every other prominent contender so far hails from Austin, at the other end of this extremely gerrymandered district.