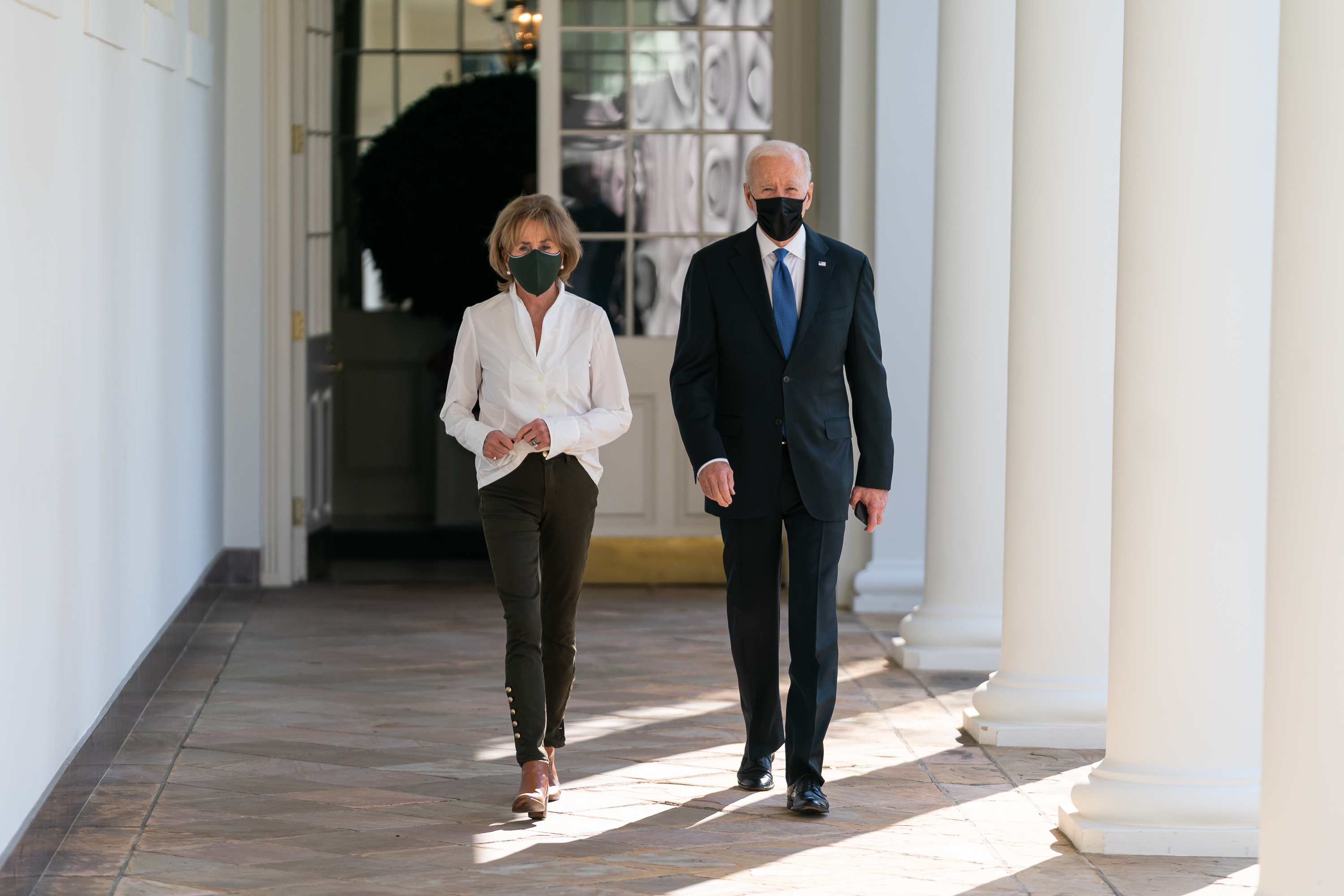 “Dickens will succeed Keisha Lance Bottoms, who did not run for a second term and endorsed Dickens to replace her as mayor, a job Dickens said he has wanted since he was a teenager.”

Jamie Belsito (D) won a Massachusetts House seat in a special election, the first Democrat to do so in the district 163 years, the Ipswich Local News reports.

MASSACHUSETTS GOVERNOR. “Massachusetts Gov. Charlie Baker (R), the Republican who maintained the enduring support of his blue state constituents through boom times, the Trump presidency, and the COVID-19 pandemic, is telling allies he will not seek a third term in 2022,” the Boston Globe reports.

“With less than a year before Election Day, Baker’s choice leaves the race wide open, and it may make way for many more major candidates than the three Democrats and one Republican who have already jumped into the gubernatorial race.” It’s likely that Donald Trump’s endorsement of a Republican primary challenger may have caused him to rethink running.

PENNSYLVANIA U.S. SENATOR. Mehmet Oz, a TV doctor and former Donald Trump adviser with a long history of dispensing quack medical advice, entered Pennsylvania’s Senate race on Tuesday and says he’ll launch a “multimillion dollar ad buy” to help him win the GOP nomination. A spokesperson says Oz plans to at least partly self-fund his campaign, though it’s not clear just how much he’s worth or how much he might spend.

Oz, an immigrant from Turkey who became famous thanks to his frequent guest appearances on the Oprah Winfrey Show, is a new arrival in the Keystone State: He lived in a mansion in New Jersey just across the river from New York City for two decades and only voted in Pennsylvania (by absentee ballot) for the first time this year. According to his campaign, he rents a home in the Philadelphia suburbs from his wife’s parents.

In an op-ed announcing his campaign in the conservative Washington Examiner, Oz focused heavily on the pandemic, attacking measures like lockdowns used to curb the spread of the virus and claiming, “Dissenting opinions from leading scholars were ridiculed and canceled so their ideas could not be disseminated.” You won’t be surprised to learn that Oz touted hydroxychloroquine on Fox News; a few years ago, he also tweeted and deleted that astrology “may reveal a great deal about our health.”

Oz’s candidacy, at least, reveals a great deal about the state of the race for the Republican nomination. As a result of the recent departure of Trump favorite Sean Parnell after a judge in a divorce proceeding concluded Parnell had abused his wife, the GOP field got blasted wide open, leaving no obvious frontrunner. Into this gap Oz hopes to step, though one party operative told Politico earlier this month that the “pretty much universal response” to the prospect of an Oz campaign “has been ‘LOL.'” We’ll see who’s still laughing come the primary in May.

“I want to congratulate my North Jersey constituent Dr. Oz on his run for U.S. Senate in Pennsylvania. I’m sure this fully genuine candidacy will capture the hearts of Pennsylvanians.”  — Rep. Bill Pascrell (D-NJ), on Twitter.

Mark Middleton (R), who is facing federal charges for allegedly assaulting police officers during the Jan. 6 insurrection and siege at the U.S. Capitol, is running for a Texas House seat, the Dallas Morning News reports.

Al Schmidt, the lone Republican on Philadelphia’s election board and one who staunchly defended the integrity of the 2020 presidential vote, will resign in January, the Philadelphia Inquirer reports.

NORTH CAROLINA U.S. SENATOR. The Club for Growth says that it will likely deploy an additional $10 million to aid Rep. Ted Budd in next year’s Republican primary in addition to the $4.5 million it will have spent for him this year.

GEORGIA SIXTH CD. Army veteran Harold Earls announced last week that he was ending his campaign for the Republican nomination in a seat that the GOP’s new gerrymander has made safely red.

Republican physician Rich McCormick, who’d been gearing up for a second House bid for some time, kicked off a campaign for Georgia’s reconfigured 6th District on Tuesday with the backing of five of the eight GOP members of the state’s congressional delegation. Supporting McCormick are Reps. Buddy Carter, Andrew Clyde, Jody Hice, Rick Allen, and Marjorie Taylor Greene, as well as a whole host of members from other states.

McCormick ran for what was then the open 7th District last year, a longtime GOP seat in the Atlanta suburbs that rapidly grew bluer during the Trump era. He lost that election 51-49 to Democrat Carolyn Bourdeaux, but Republicans have since further gerrymandered Georgia’s congressional map to pack Democrats into the 7th while making the neighboring 6th solidly red. As a consequence, Democratic Rep. Lucy McBath recently announced she’d square off against Bourdeaux in the 7th District, leaving the 6th open.

However, even before redistricting, several Republicans were already running in the 6th, including former state ethics commission chair Jake Evans and former state Rep. Meagan Hanson. Both have raised credible sums, and both are continuing their campaigns, so despite the big names in his corner, McCormick may not have a smooth path to the GOP nomination.

CALIFORNIA FOURTEENTH CD. San Mateo Councilmember Diane Papan announced Monday that she would run for the state Assembly rather than campaign for this safely blue open congressional district. Another Democrat, San Mateo County Supervisor Dave Pine, also has taken his name out of contention by endorsing Assemblyman Kevin Mullin.

MARYLAND GOVERNOR. Businessman Michael Rosenbaum announced Tuesday that he was dropping out of the crowded Democratic primary.

CALIFORNIA THIRTY-SEVENTH CD. State Sen. Sydney Kamlager has filed paperwork for a potential bid to succeed Rep. Karen Bass, a fellow Democrat who is leaving Congress to run for mayor of Los Angeles.

MISSOURI FOURTH CD. Former state Sen. Kurt Schaefer has announced that he will not run in the Republican primary for this open seat.

OHIO NINTH CD. Republican state Sen. Theresa Gavarone has filed FEC paperwork for a potential bid against Democratic Rep. Marcy Kaptur in a new district that backed Donald Trump 51-47 under the new GOP gerrymander, a huge shift from Joe Biden’s 59-40 victory under the current lines. Gavarone should know better than almost anyone else how much this constituency has changed, though, since she was co-chair of the legislature’s redistricting committee; the senator, however, lives in the new 5th District, which is held by GOP Rep. Bob Latta.

Kaptur, who is the longest-serving woman in the history of the House, has never failed to win by double digits, though it’s been a very long time since she’s had to run under lines as tough as these. The incumbent ended September with $860,000 on-hand to defend herself.

OREGON GOVERNOR. Attorney General Ellen Rosenblum said this week that she would not enter next year’s Democratic primary for governor. Rosenblum was the last major Democrat who still appeared to be considering running for Oregon’s top job, though it’s always possible someone else will enter before the March filing deadline.

Rep. Marjorie Taylor Greene’s (R-GA) threat to back a primary challenger to Rep. Nancy Mace (R-SC) — who Greene called “trash” in a Twitter spat yesterday — should be taken very seriously. Said Greene, after speaking with Donald Trump: “Obviously, I love that man. And I have his support 1,000%. And unfortunately, Nancy Mace doesn’t.” She added: “I will be very supportive of a primary challenger, along with President Trump.”

Mace already has four declared Republican primary challengers and the current redistricting proposal for her district makes it much safer for Republicans. That leaves her very vulnerable to a challenge from the right.

Just ask former Rep. Mark Sanford (R-SC), who once held Mace’s seat. He lost a GOP primary in 2018 when he crossed Trump and the former president backed a challenger.

Trump hasn’t weighed in publicly yet on the Greene-Mace feud, but he probably wouldn’t mind seeing Mace defeated by a loyalist.

Furthermore, Greene has nothing better to do than seek vengeance on Mace. She has no committee assignments. She has a safe re-election race. And she has a campaign war chest that has already swelled to more than $3 million.

“Allies of former President Donald Trump are trying to rip up the traditional book publishing paradigm in politics by setting up a publishing house of their own. And they have the ex-president helping them do it,” Politico reports.

“Trump announced last week that he was publishing a coffee table book of photographs from his time in the White House — just ahead of the holiday gift rush — with Winning Team Publishing. The outfit is a new imprint with a decidedly MAGA flavor, run by former Trump campaign aide Sergio Gor and Trump’s son, Donald Trump Jr.”

“Trump has not yet written a post-presidential memoir. And part of the reason, sources in the industry say, is that some of the major publishing houses have recoiled at the prospect of having to fact-check his work or the social backlash that would ensue. With allies setting up their own publishing house, the president could potentially circumvent those hurdles.”

Jonathan Bernstein: “I’ve written several times about how Republicans interpreted their 1994 midterm-election landslide as a consequence of their obstruction strategy in Congress during 1993-1994. That lesson taught them to return to that strategy in 2009-2010, and after the Republican landslide in the 2010 midterms, they were certain to be just as obstruction-minded the next time Democrats had unified government, which turned out to be this year.”

“What I missed is how all of this affected Democrats: Many of them acquired the fatalistic conviction that unified government is certain to be no more than a two-year opportunity followed by at least a decade, and perhaps far more, in which Democrats can pass none of their priorities. Even worse: The memory of Senator Ted Kennedy’s death in 2009 and the upset victory by a Republican to replace him has focused Democrats on the possibility that their narrow Senate majority this year could disappear at any moment.”