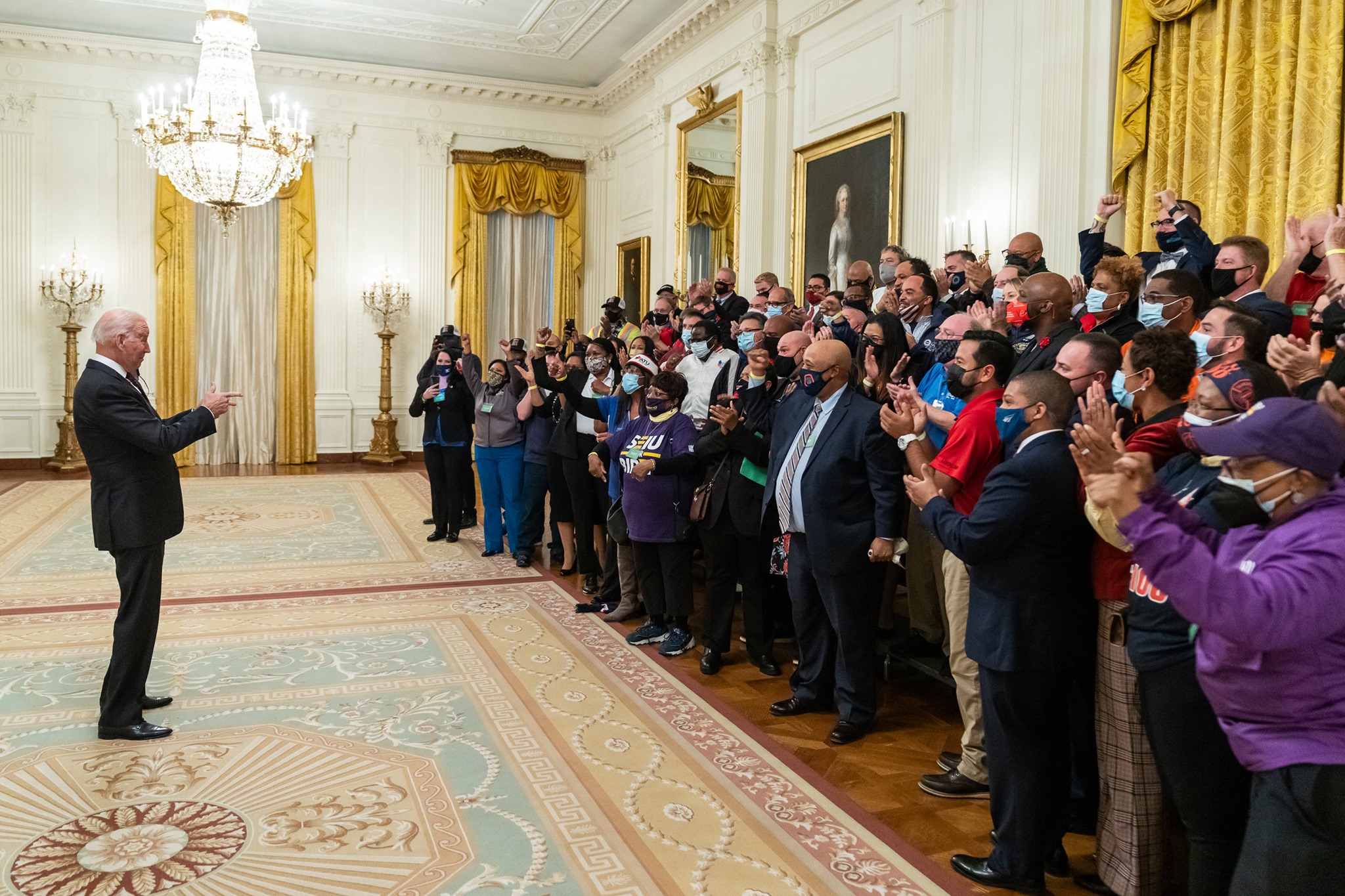 Senate Majority Leader Charles Schumer (D-NY) is planning to bring President Biden’s social and climate spending bill to the floor as soon as the week of Dec. 13, The Hill reports.

“Schumer’s plan is to bring the bill, known as Build Back Better, to the Senate floor once Democrats finish their conversations with the parliamentarian, who provides guidance on what can be included in a bill passed through budget reconciliation.”

“Senate Democrats’ daunting year-end agenda started off with a face plant on a routine, popular defense bill. That was supposed to be the easy part,” Politico  reports.

“Senate Republicans’ Monday blockade of the annual defense legislation over lack of amendment votes presaged a bitingly difficult December for Democrats’ slim Senate majority. Top of mind is clinching President Joe Biden’s $1.7 trillion spending package, which can pass with only Democratic votes and is expected to move after the routine defense bill. Simultaneously, the House and Senate need to fund the government past Friday and raise the debt ceiling in the coming weeks.”

Playbook: “The consensus is in: Most people on Capitol Hill are kissing Christmas — or at least most of December — goodbye this year.”

Sen. Rand Paul (R-KY) told Politico that he plans to force a vote to block the Biden administration’s proposed arms sale to Saudi Arabia. Paul is right, and so is a broken clock twice a day.

Sen. Joe Manchin (D-WV) suggested there was a path forward to vote on the debt ceiling and avoid what would be the nation’s first ever default, NBC News reports.

Said Manchin: “I understand there was an agreement from the Republicans to do a very quick reconciliation by itself for the debt ceiling only.”

“Former Trump White House chief of staff Mark Meadows has reached an initial deal to cooperate with the House committee investigating the Jan. 6 attack on the Capitol, providing documents and agreeing to testify before the panel,” The Hill reports.

CNN: “The move represents a critical shift in the relationship between the top Trump ally and the panel, and staving off a criminal contempt referral for now.”

CBS News: “The select committee investigating the deadly attack on the Capitol plans to meet Wednesday to vote on whether to recommend if the full House should hold Trump ally Jeffrey Clark, in contempt of Congress. He would be the second Trump ally to be found in contempt of congress for failing to comply with a subpoena from the panel.”

“Former President Donald Trump faces a major test in Washington on Tuesday, as he attempts to convince a federal appeals court he should be able to keep records from his presidency from the House select committee that’s investigating the January 6 US Capitol riot,” CNN reports.

“The arguments are likely to be an uphill battle for the former President. The Biden administration and the House are aligned against him in wanting transparency about communications in the West Wing as Trump sought to overturn the 2020 election result and his supporters raided the Capitol. Trump lost his first round in court in the case, more quickly and resoundingly than his losses when he tried to claim broad protections from investigations while he was President.”

Rep. Lauren Boebert (R-CO) suggested to a crowd in September that Rep. Ilhan Omar (D-MN), whom she called “black-hearted” and “evil,” was a terrorist, CNN reports.

In those same remarks, she said that she felt safe around Omar because the Democrat wasn’t wearing a backpack while they were in an elevator together.

Tweeted Greene: “She is the trash in the GOP Conference. Never attacked by Democrats or RINO’s (same thing) because she is not conservative, she’s pro-abort.”

“Federal prosecutors have demanded the financial records of multiple fundraising organizations launched by attorney Sidney Powell after the 2020 election as part of a criminal investigation,” the Washington Post reports.

Jacob Chansley, the so-called QAnon shaman, filed an appeal seeking to void his guilty plea and 41-month prison sentence for his notorious role in the Jan 6 Capitol riot, CNBC reports.

“Dutch health authorities announced on Tuesday that they found the new Omicron variant of the coronavirus in cases dating back as long as 11 days, indicating that it was already spreading in western Europe before the first cases were identified in southern Africa,” CBS News reports.

Moderna CEO Stéphane Bancel told the Financial Times that existing vaccines will be much less effective at tackling Omicron than earlier strains of coronavirus. Said Bancel: “There is no world, I think, where the effectiveness is the same level… I think it’s going to be a material drop.” He added: “I just don’t know how much because we need to wait for the data. But all the scientists I’ve talked to . . . are like, ‘This is not going to be good.’”

“Preliminary tests indicate the Covid-19 antibody drug cocktail from Regeneron Pharmaceuticals Inc. loses effectiveness against Omicron, a sign that some products in an important class of therapies might need modifying if the new strain becomes widespread,” the Wall Street Journal reports.

Said Jackson: “Here comes the MEV — the Midterm Election Variant! They NEED a reason to push unsolicited nationwide mail-in ballots Democrats will do anything to CHEAT during an election — but we’re not going to let them!”

China expects to hold the 2022 Winter Olympics “smoothly” and on schedule, despite challenges posed by the emergence of the new Omicron coronavirus variant, Reuters reports.

If the Supreme Court strikes down abortion rights, 12 states, including Mississippi and Texas, are set to outlaw abortion through “trigger” laws that would automatically take effect, Insider reports.

“I think if you want to see a revolution, go ahead, outlaw Roe v. Wade and see what the response is…”  — Sen Jeanne Shaheen (D-NH), quoted by WMUR.

The Atlantic: “Amid all the attention paid to the legal drama surrounding both Mississippi’s and Texas’s contested abortion laws, one striking detail seems to have escaped much notice: Neither state makes an exception for rape or incest.”

“This is a major departure, a sign of how extreme America’s abortion politics have become. For decades, exceptions to abortion bans for rape and incest were a rare source of consensus…”

“The reason is power. Many anti-abortion activists never believed that a rape or incest exception could be squared with their deeply held belief that a fetus is a person. Today the anti-abortion movement is ready to ask for what it wants, and the GOP—and its allies on the Supreme Court—is willing to give it to them. What the movement wants, now as in the past, is the recognition of fetal personhood. And historically, recognizing personhood has often meant criminalizing the behavior of pregnant women, even when those women are victims of crimes themselves.”

Philip Bump: “It is red America, Donald Trump-voting America, that has seen the worst effects of the pandemic. With divergent vaccination rates, with the unvaccinated population that’s most at risk being made up of Republicans at three times the rate of Democrats, that gap is poised to grow.”

“If we break down monthly case and death figures by county vote in 2020, we see that Trump counties have been hardest hit by the pandemic on a per capita basis since last year. If we throw in vaccination rates, we see that it is those same counties that have been the slowest to get vaccinated.”

Catherine Rampell: “Once upon a time, states debated whether to pay people to get vaccinated. Now, some red states are paying people not to get vaccinated, by cutting checks to workers who quit or are fired because they refuse covid-19 shots.”

“President Biden told executives from some of the nation’s largest retailers on Monday that his administration was committed to partnering with them to untangle supply chains and ensure that American consumers can find everything they want this holiday season, as a surge in shopping tests an already strained global delivery system,” the New York Times reports.

“Israel has shared intelligence over the past two weeks with the U.S. and several European allies suggesting that Iran is taking technical steps to prepare to enrich uranium to 90% purity — the level needed to produce a nuclear weapon,” Axios reports.

“Enriching to 90% would bring Iran closer than ever to the nuclear threshold.”

“The White House is reviewing options to deter a feared Russian invasion of Ukraine, including providing more military aid to Kyiv and threatening sanctions, to dissuade Russian President Vladimir Putin from escalating the simmering conflict into a full-blown transatlantic crisis,” the Washington Post reports.

“The deliberations come as President Biden and his aides prepare for a virtual call with Putin next month, a moment that analysts see as an opportunity to signal the costs of an invasion to the Kremlin but also present a path for reducing tension.”

“Federal Reserve Chair Jerome Powell will tell lawmakers Tuesday that the Omicron variant of the coronavirus could slow the recovery in the U.S. job market and prolong supply chain disruptions that have fueled price spikes,” Politico reports.

“Hours before the deadly attack on the US Capitol this year, Donald Trump made several calls from the White House to top lieutenants at the Willard hotel in Washington and talked about ways to stop the certification of Joe Biden’s election win from taking place on January 6,” The Guardian reports.

“The former president first told the lieutenants his vice-president, Mike Pence, was reluctant to go along with the plan to commandeer his largely ceremonial role at the joint session of Congress in a way that would allow Trump to retain the presidency for a second term.”

“But as Trump relayed to them the situation with Pence, he pressed his lieutenants about how to stop Biden’s certification from taking place on 6 January, and delay the certification process to get alternate slates of electors for Trump sent to Congress.”

Daily Beast: “After a holiday break where he didn’t receive a classified intelligence briefing, President Donald Trump was supposed to get one on Jan. 6, 2021—the day he incited a violent attack on the U.S. Capitol. It didn’t happen. And then he didn’t get one for the rest of his presidency.”

“The situation in the waning days of Trump’s presidency was so uncommon that it actually caused concern among some administration officials that Trump was losing touch with reality, as he was getting unhinged advice on domestic issues from Justice Department attorneys and outside counsel that openly advocated rejecting election results.”

“CNN said that it will evaluate new information that sheds light on how anchor Chris Cuomo sought to help his brother, former New York Gov. Andrew Cuomo, amid a flurry of sexual misconduct allegations earlier this year,” CNN reports.

“The documents indicated that the scope of how the anchor aimed to help his brother was more considerable and that he was more intimately involved than previously known.”