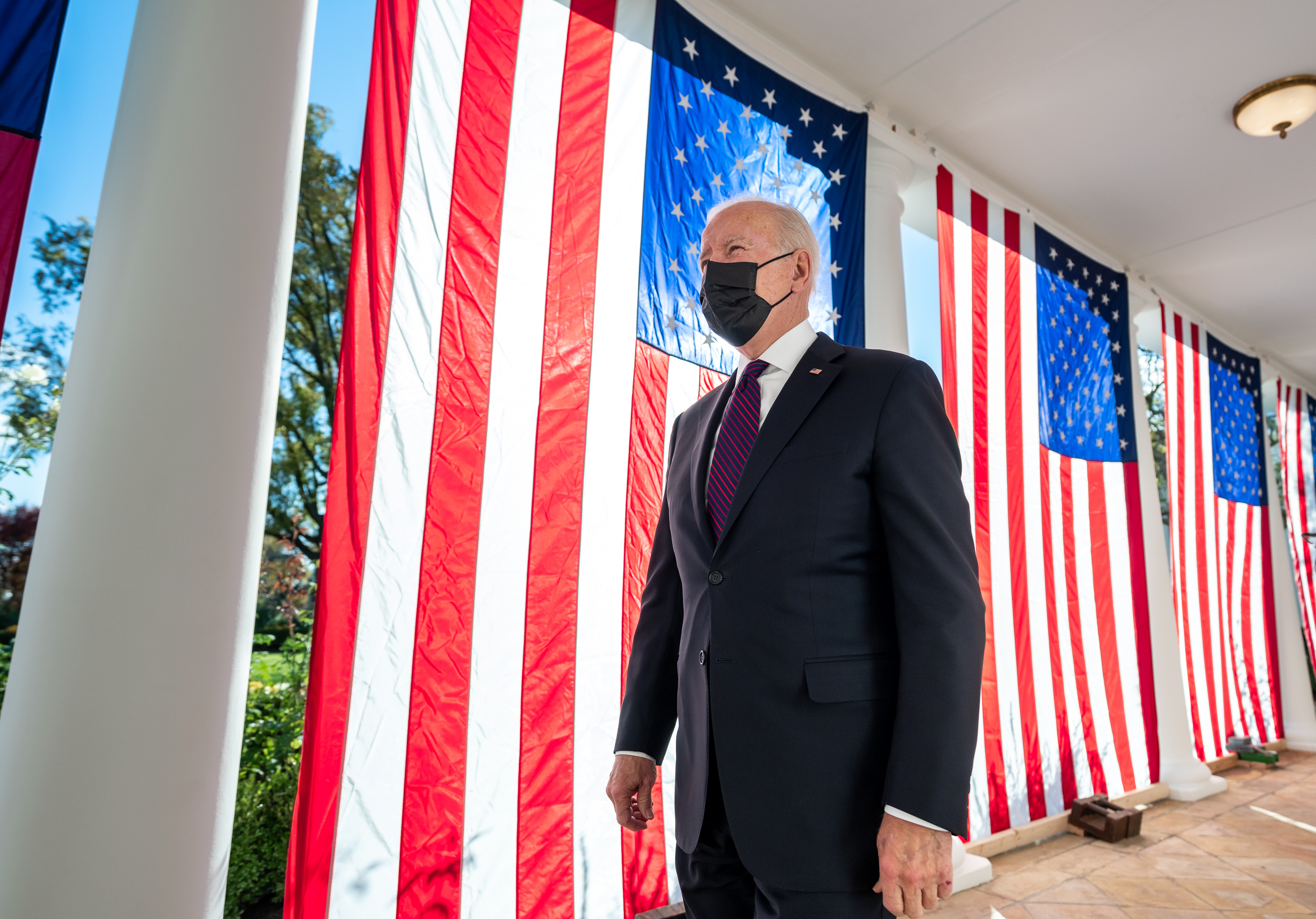 “Washington and Wall Street were optimistic Monday that Congress can pass a bill to fund the government and avert a partial shutdown before a Friday deadline,” CNBC reports.

As for the debt ceiling… Punchbowl News: “The legislative mechanism for [raising the debt ceiling] is still unclear. Senate Democrats have shown no interest in attaching it to BBB — as McConnell has suggested for the last five months — and there’s no interest from House Democrats or Senate Republicans to adding it onto the defense authorization bill, which Schumer has floated. So party leaders need to find a vehicle for a debt-limit increase. It won’t be the CR, although that would make the most sense in a lot of ways. But sense and Congress don’t always go together.”

“What’s notable here is the lack of incendiary language from McConnell and Senate Republicans on the issue this time around. Schumer and McConnell have met and discussed resolving the debt limit, but they haven’t said much beyond that. Hopefully there’ll be some more clarity this week. Wall Street is watching closely.”

“Reps. Ilhan Omar (D-MN) and Lauren Boebert (R-CO) clashed in what both described as a tense phone call on Monday after video surfaced of the far-right lawmaker making Islamophobic remarks about her colleague,” The Hill reports.

Said Omar: “Today, I graciously accepted a call from Rep. Lauren Boebert in the hope of receiving a direct apology for falsely claiming she met me in an elevator, suggesting I was a terrorist, and for a history of anti-Muslim hate. Instead of apologizing for her Islamophobic comments and fabricated lies, Rep. Boebert refused to publicly acknowledge her hurtful and dangerous comments.  She instead doubled down on her rhetoric and I decided to end the unproductive call.”

Said Boebert: “She kept asking for a public apology. So I told Ilhan Omar that she should make a public apology to the American people for her anti-American, anti-Semitic, anti-police rhetoric.”

Politico says the controversy between the two lawmakers “escalated to a full boil.”

Playbook: “The drama surrounding Rep. Lauren Boebert’s (R-CO) Islamophobic comments about Rep. Ilhan Omar (D-MN) is about to heat up as lawmakers return from Thanksgiving recess this week. Sources tell us a faction of Democrats is expected to push leadership to strip Boebert of her committee assignments or censure her after she joked about Omar, who is Muslim, being safe to ride with in an elevator because she wasn’t wearing a backpack.”

“This is a messier situation for Democrats than their previous moves to punish Reps. Paul Gosar (R-AZ) and Marjorie Taylor Greene (R-GA) in similar fashion. Unlike those two, Boebert issued a public apology and reached out to Omar’s office to try to speak with her. House Minority Leader Kevin McCarthy even tried to play peacemaker, calling House Majority Leader Steny Hoyer personally this weekend and asking him to help facilitate a meeting between the two women.”

“I’m sparing no effort and removing all roadblocks to keep the American people safe.” — President Biden, quoted by Politico, on possible preparation to fight the Omicron variant.

“President Biden said Monday that his administration was not recommending further restrictions on businesses or in-person gatherings to combat the coronavirus pandemic amid concerns about the new omicron variant,” The Hill reports.

The first two cases of the new Omicron variant have been detected in North America, the Canadian government announced Sunday evening, Axios reports.

“Federal health officials are bracing for the first cases of the new Omicron coronavirus variant to be detected in the US and say there are likely far more cases worldwide than is currently known,” CNN reports.

“In the rush to understand the threat posed by the Omicron variant, the worrisome new version of the coronavirus, some experts are pointing hopefully to early signs that it may cause only mild illness, without some of the trademark symptoms of Covid,” the New York Times reports.

“But it is far too early to assume that the variant will not cause severe illness.”

The World Health Organization said Monday in a new risk assessment that it believes the Covid-19 Omicron variant poses a “very high” risk to the globe because it may be more transmissible than other strains of the virus, Axios reports.

“The Supreme Court has turned away an emergency appeal from employees at the largest hospital system in Massachusetts who object to the COVID-19 vaccine on religious grounds,” the AP reports.

“Most federal workers who failed to meet the Nov. 22 deadline to get vaccinated against the coronavirus will not risk being suspended or losing their jobs until next year,” USA Today reports,

“The Justice Department on Sunday night accused Steve Bannon’s defense team of lodging ‘frivolous’ legal complaints in order to cause a public dust-up with prosecutors as he battles criminal charges for attempting to thwart the House’s Jan. 6 select committee,” Politico reports.

“Florida, Iowa, Kansas and Tennessee have changed their unemployment insurance rules to allow workers who are fired or quit over vaccine mandates to receive benefits.”

The Washington Post reviews Betrayal: The Final Act of the Trump Show by Jonathan Karl.

“Karl’s sobering, solid, account of Trump’s last year in office sheds new light on how the man who lost the presidency nearly succeeded in overthrowing the 2020 election. Anyone who thinks that ‘it can’t happen here,’ ought to read this book.”

“Éric Zemmour, the hard-right pundit who has broken into the French presidential race, was facing scandal yesterday with a report that his campaign director, who is 35 years his junior, is expecting his child,” the Times of London reports.

Politico reports that Zemmoir is suing the gossip magazine that broke the news.

Rep. Marjorie Taylor Greene (R-GA) said she spoke with GOP leader Kevin McCarthy after the congresswoman threatened to torpedo McCarthy’s ambition to be elected Speaker of the House.

Said Greene: “We spent time talking about solving problems not only in the conference, but for our country. I like what he has planned ahead.”

Rep. Adam Kinzinger (R-IL) tweets: “Here is real strength, when Kevin McCarthy has to call a freshman begging for permission to stay in power. What has Kevin promised?“

Wall Street Journal: “As negotiators gather in Vienna for talks aimed at reviving an international nuclear agreement with Iran, one big question looms: Has Tehran advanced its nuclear work so much in the past two years that the 2015 deal can no longer be rescued?”

“Former Defense Secretary Mark Esper on Sunday sued the agency he once led, accusing officials at the Pentagon of improperly blocking significant portions of an upcoming memoir about his tumultuous tenure under President Donald Trump,” the New York Times reports.

“CNN host Chris Cuomo used his sources in the media world to seek information on women who accused his brother Andrew Cuomo, then the governor of New York, of sexual harassment, according to documents released Monday by the New York Attorney General’s Office,” CNBC reports.

“While Chris Cuomo has previously acknowledged advising his brother and his team on the response to the scandals, the records show that his role in helping the then-governor was much larger and more intimate than previously known.”