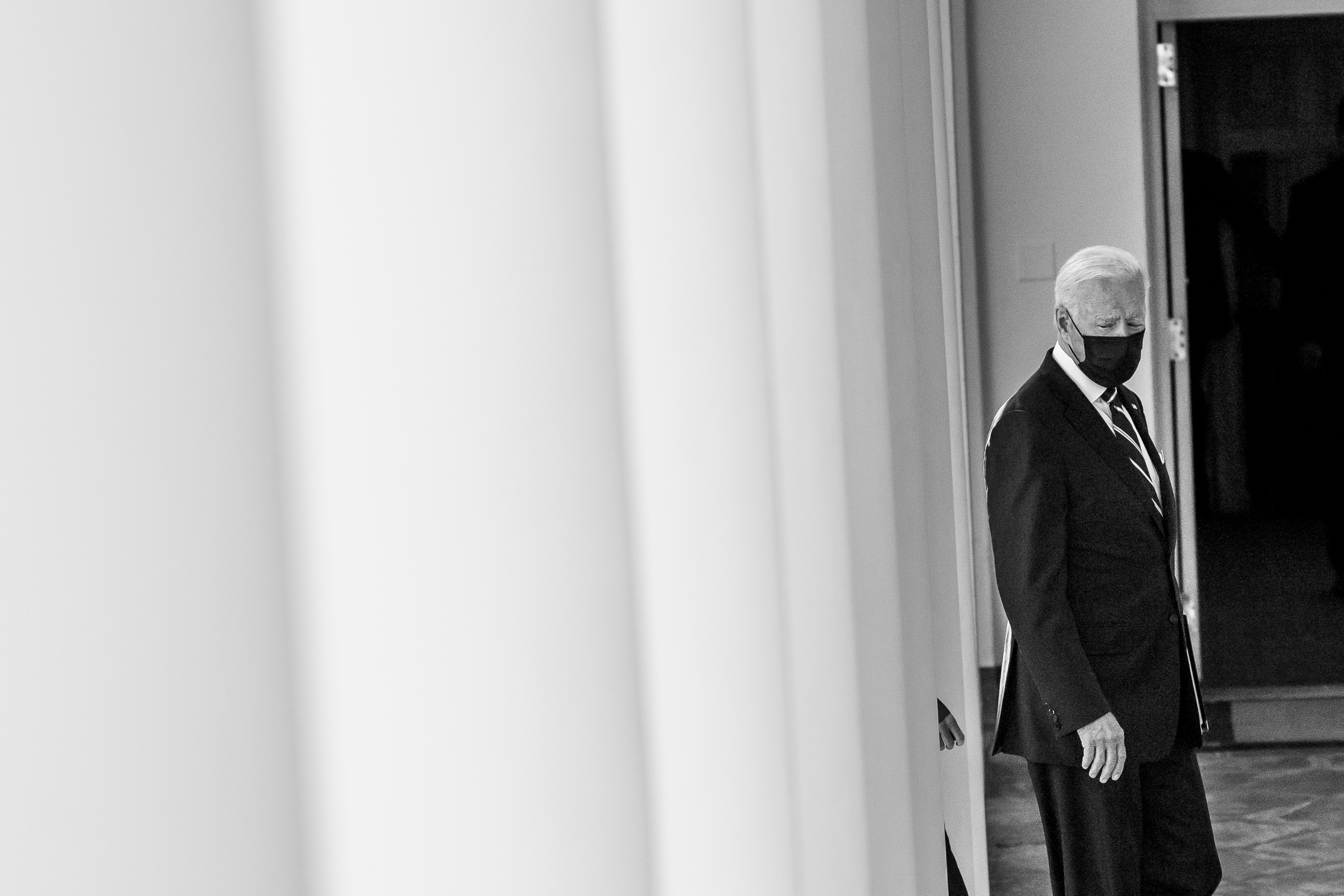 The New York Times says “vaccines are expected to provide some protection against Omicron because they stimulate not only antibodies but immune cells that can attack infected cells… Mutations to the spike protein do not blunt that immune-cell response.”

“And booster shots could potentially broaden the range of antibodies people make, enabling them to fight against new variants like Omicron.”

“For now, there’s no evidence that Omicron causes more severe disease than previous variants. And it’s also not clear yet how quickly Omicron can spread from person to person.”

New York Times: “The W.H.O. and scientists on multiple continents cautioned that very little is known yet about the Omicron variant, or about whether the dangers it poses will justify the fears it is stoking. South African scientists announced its existence on Wednesday, and the number of cases definitively identified, all of them within the past three weeks, is still small, under 100.”

“But the swift global responses demonstrated that after nearly two years of facing accusations that they were too slow and timid in tackling the pandemic, many policymakers would rather risk overreacting to a new threat than under-reacting.”

Associated Press: “Scientists know that omicron is genetically distinct from previous variants including the beta and delta variants, but do not know if these genetic changes make it any more transmissible or dangerous. So far, there is no indication the variant causes more severe disease.”

“It will likely take weeks to sort out if omicron is more infectious and if vaccines are still effective against it.”

Washington Post: “There is too little research to draw conclusions, with experts urging caution but not panic. Studies are underway to examine how vaccines hold up against the new variant, with some experts expressing initial optimism that they will offer protection. Officials in South Africa said most of those hospitalized with omicron had not gotten immunized.”

Katelyn Jetelina: “It will take weeks to understand what these new mutations mean or, more importantly, the combination of so many mutations. Keep in mind that the number of mutations does NOT always equal more severe. … There’s still so much that we don’t know but what we do know is incredibly concerning.”

“The U.K. and Italy became the latest countries to detect the Omicron variant of the coronavirus, as other European nations investigate suspected cases of a strain that health authorities say could be more transmissible and has been driving a jump in infections in South Africa,” the Wall Street Journal reports.

“Cases of the Omicron variant of the coronavirus were reported for the first time in Australia on Sunday, adding to a growing list of countries that are scrambling to respond to a new, highly mutated version of the virus that scientists still know little about but that has sent ripples of panic through governments and markets,” the New York Times reports.

“Israel will forbid the entry of noncitizens for two weeks, starting at midnight Sunday night, in an attempt to stem the spread of the omicron coronavirus variant in Israel and to allow experts time to assess its level of transmissibility and resistance against existing vaccines,” the Washington Post reports.

Washington Post: As omicron variant is detected around the world, travel bans may be too late.

Washington Post: What to know about the omicron variant of the coronavirus.

Playbook: “In a real sense, Biden’s presidency rises and falls on the waves of the coronavirus. The Delta wave in August precipitated a lasting fall in Biden’s political popularity and job-approval numbers — which sets up Omicron as yet another major test for the White House. That reality — plus the economic jitters rattling an already-uneasy economy — could have the makings of a storm for the president.”

Wall Street Journal: “White House officials have privately expressed frustration that positive economic developments on employment have sometimes been overshadowed by coverage of inflation and supply-chain problems… They are trying to strike a balance between touting those developments and acknowledging the effects of rising prices.”

Nate Cohn: “The disconnect between Mr. Biden’s popular policies and his personal unpopularity is a little hard to understand. After all, voters do care about the issues. They’ve proved it by gradually sorting into ideologically divided parties over the past two decades. And it’s clear that presidents can be punished for advancing an unpopular agenda. Just ask Barack Obama about the period after the Affordable Care Act was passed.”

“Today, Mr. Biden is not seen as presiding over the long promised return to normalcy. Maybe that will change in the months ahead. But Mr. Biden’s policy agenda is not expected to do much to help his approval rating so long as Americans do not believe that agenda responds to the most immediate issues facing the country.”

“A moderate House Republican is firing off a warning shot at House Minority Leader Kevin McCarthy as he caters to his right flank in a quest for the speaker’s gavel,” CNN reports.

Said the unnamed GOP lawmaker: “He’s taking the middle of the conference for granted. McCarthy could have a bigger math problem with the moderates.”

Associated Press: “Both sides are telling the Supreme Court there’s no middle ground in Wednesday’s showdown over abortion.”

“The justices can either reaffirm the constitutional right to an abortion or wipe it away altogether. Roe v. Wade, the landmark 1973 ruling that declared a nationwide right to abortion, is facing its most serious challenge in 30 years in front of a court with a 6-3 conservative majority that has been remade by three appointees of President Donald Trump.”

“Texas’ new measure was intended to impose stringent limits on abortion. But it is also affecting women who have no desire for termination but are experiencing medically risky pregnancies,” the New York Times reports.

“Many doctors say they are unable to discuss the procedure as an option until the patient’s condition deteriorates and her life is at risk. … Abortion is permitted in Texas after six weeks only when a woman is facing a life-threatening or disabling medical emergency linked to her pregnancy. The law makes no exceptions for nonviable pregnancies in which the fetus has no chance of survival.”

Dr. Anthony Fauci told CBS News the U.S. has “the potential to go into a fifth wave” of coronavirus infections amid rising cases, stagnating vaccination rates, and underwhelming administration of boosters.

Said Fauci: “The profile of the mutations strongly suggest that it’s going to have an advantage in transmissibility and that it might evade immune protection that you would get, for example, from the monoclonal antibody or from the convalescent serum after a person’s been infected and possibly even against some of the vaccine-induced antibodies.”

“I grade scientific, A+. I grade public health. C, B+, B-, C somewhere between B and C. It certainly is not A.” — Dr. Anthony Fauci, when asked on CBS News how he grades the U.S. pandemic response.

Los Angeles Times: “A small study that’s among the first to track people’s protective antibodies over time found that those who were immunized against COVID-19 with two doses of an mRNA vaccine and received a booster shot about eight months later saw their levels of neutralizing antibodies skyrocket.”

“Among this group of 33 fully vaccinated and boosted people, the median level of these antibodies was 23 times higher one week after the booster shot than it had been just before the tune-up dose.”

“What’s more, their median post-booster antibody level was three times higher than was typical for another group of people whose antibodies were measured a few weeks after getting their second dose of vaccine, when they’re close to their peak. And it was 53 times higher than that of a group of 76 unvaccinated people who had recovered from COVID-19 just two to six weeks earlier.”

Washington Post: “As part of the emergency, the state’s health department will be allowed to protect hospital capacity by limiting nonessential and non-urgent care until at least Jan. 15. Hospitals with less than 10 percent staffed bed capacity, or those designated by the state, will be authorized to screen patients and restrict admissions to keep beds open for the most urgent cases.”

Wall Street Journal: “The Biden administration plans to use a meeting of NATO foreign ministers to focus on how the alliance should respond to Russian military pressure on Ukraine as the Ukrainian president warned Friday of a possible Moscow-backed coup attempt.”

“The meeting, which is scheduled to begin on Tuesday, comes amid debate within the alliance’s ranks about how to be firm about the possibility of Russian aggression, as it masses troops near Ukraine, while keeping political channels open to Moscow.”

Associated Press: “Democrats wielded demands to fix the nation’s broken immigration system as a cudgel against Republicans in the 2020 campaign. Elect us, went the argument, and we’ll stop the cruel treatment of migrants at the border, and put in place lasting and humane policies that work.”

“A year into Joe Biden’s presidency, though, action on the issue has been hard to find and there is growing consternation privately among some in the party that the Biden administration can’t find the right balance on immigration.”

“As a White House adviser in the Trump administration, Jared Kushner took a special interest in the petroleum-rich monarchies of the Persian Gulf,” the New York Times reports.

“He formed a personal friendship with the crown prince of Saudi Arabia. He helped forge ties between Israel and the United Arab Emirates, and backed Emirati rulers in a feud with Qatar. Since the electoral defeat of his father-in-law, former President Donald J. Trump, Mr. Kushner has stayed active in the region through a nonprofit organization he established.”

“Now, in a move that has raised eyebrows among diplomats, investors and ethics watchdogs, Mr. Kushner is trying to raise money from the Persian Gulf states for a new investment firm he has founded. So far, he is having only mixed success.”

“Biden’s stroll around downtown was reminiscent of a period during Barack Obama’s presidency when he rebelled against the limits that come with occupying the Oval Office. Modern presidents generally do not get around on foot.”

Ali Alexander, one of the main organizers of the Jan. 6 “Stop the Steal” rally that preceded the deadly Capitol riot, has announced that he will comply with a congressional subpoena over his role in the attempted insurrection, the Daily Beast reports.

Daily Beast: “Former Trump national security adviser Michael Flynn has embraced his position as a hero to QAnon conspiracy theorists. He took the QAnon oath, sold QAnon T-shirts, and even auctioned off a QAnon quilt. He appeared at a QAnon convention and signed books with a QAnon slogan. Some QAnon followers even believe that Flynn is “Q,” the mysterious figure behind QAnon.”

“But a recording released late Saturday night by a one-time Flynn ally suggests that the retired three-star general privately believes QAnon to be ‘total nonsense.’”

“Then, as U.S. forces were completing their withdrawal in August, these operatives stepped out of the shadows in Kabul and other big cities across Afghanistan, surprising their neighbors and colleagues. Pulling their weapons from hiding, they helped the Taliban rapidly seize control from the inside.”

“The pivotal role played by these clandestine cells is becoming apparent only now, three months after the U.S. pullout. At the time, Afghan cities fell one after another like dominoes with little resistance from the American-backed government’s troops. Kabul collapsed in a matter of hours, with hardly a shot fired.”

Michael Cohen said prosecutors in New York could “indict Donald Trump tomorrow if they really wanted and be successful,” The Guardian reports.

Said Cohen: “I can assure you that Donald Trump is guilty of his own crimes. Was I involved in much of the inflation and deflation of his assets? The answer to that is yes.”

He added: “You can bet your bottom dollar that Allen Weisselberg is not… the key to this. They are going after Donald. They’re going after Don Jr, Eric, Ivanka, a whole slew of individuals, family as well.”