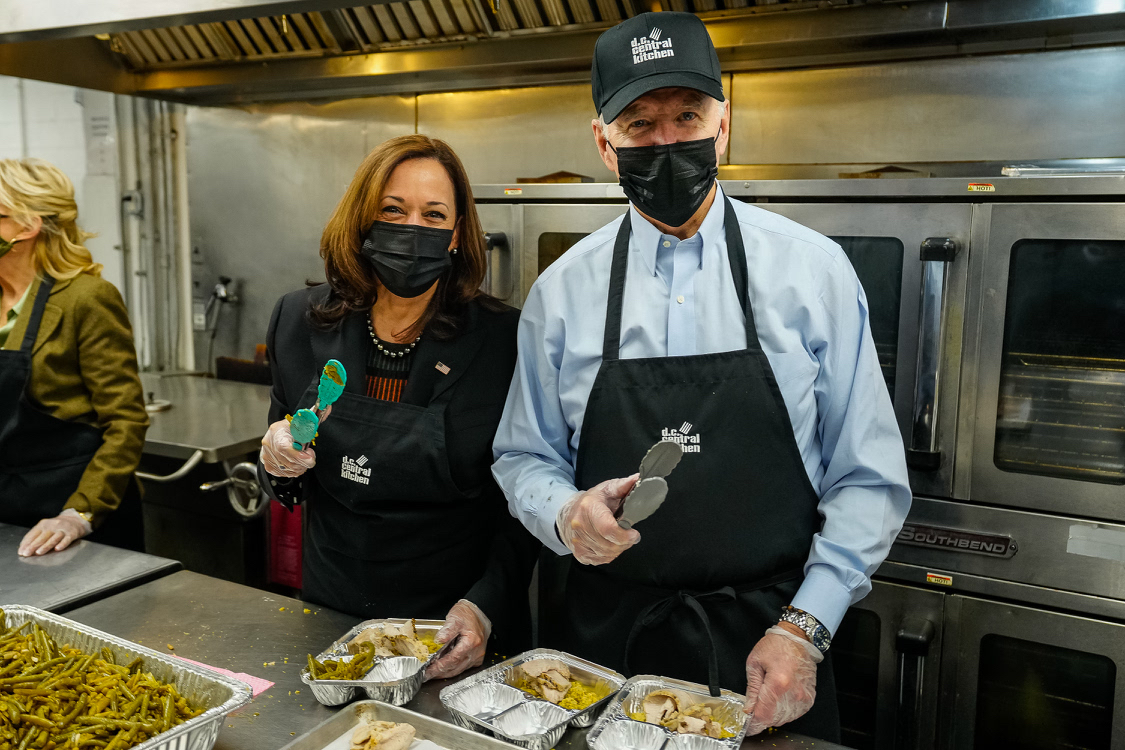 The Washington Post notes the new unemployment claims were “the lowest level since November 1969.”

JP Morgan has revised its current-quarter real annualized GDP growth estimate from 5.0% to 7.0%.

“The Biden administration has taken pains in recent days to show it is working to ease the pain of inflation for Americans,” the Washington Post reports.

“President Biden’s top economists have worried from the beginning of his administration that rising inflation could hamstring the economy’s recovery from recession, along with his presidency. Last spring, Mr. Biden’s advisers made a forecasting error that helped turn their fears into reality, a calculation that spread to this week’s decision to renominate the Federal Reserve chair,” the New York Times reports.

“Administration officials overestimated how quickly Americans would start spending money in restaurants and theme parks, and they underestimated how many people wanted to order new cars and couches.”

“A long-running criminal investigation into Donald Trump and his family business is reaching a critical phase as Cyrus Vance Jr., the prosecutor overseeing the inquiry, enters his final weeks as Manhattan district attorney,” the New York Times reports.

“Mr. Vance’s prosecutors have issued new subpoenas for records about Mr. Trump’s hotels, golf clubs and office buildings. They recently interviewed a banker employed by Deutsche Bank, Mr. Trump’s top lender. And earlier this month, they told a top Trump executive who had been under scrutiny, Matthew Calamari, that they did not currently plan to indict him in the purported tax-evasion scheme that led to charges against Mr. Trump’s company and its chief financial officer.”

“The developments, described by people with knowledge of the matter, show that the Manhattan prosecutors have shifted away from investigating those tax issues and returned to an original focus of their three-year investigation: Mr. Trump’s statements about the value of his assets.”

“Trump Organization Chief Operating Officer Matthew Calamari, who was being investigated by prosecutors as part of a wide-ranging probe into the former president’s company, is not expected to be charged in the case,” NBC News reports.

“Five Democratic senators have told the White House they won’t support Saule Omarova to head the Office of the Comptroller of the Currency, effectively killing her nomination for the powerful bank-regulator position,” Axios reports.

“Their opposition also hints at a willingness of some Democratic senators to buck the White House on an important nomination, even if it hands Republicans a political — and symbolic — victory.”

“Republicans have attacked the Kazakh-born scholar in remarkably personal terms, and turned her nomination into a proxy battle over how banks should be regulated.”

“A federal court order late Tuesday may be a worrisome sign for former President Donald Trump in his effort to assert executive privilege over documents sought by a House committee investigating the Jan. 6 attack on the Capitol,” NBC News reports.

“The U.S. Circuit Court of Appeals for the District of Columbia notified lawyers for Trump, the House committee and the National Archives that they should be prepared to address whether the court even has the legal authority to hear the dispute. Oral arguments are scheduled for Nov. 30.”

“Trump is accusing the House select committee investigating January 6 of being so aggressive in its pursuit of his White House records that it could permanently damage the presidency,“ CNN reports. “Trump is appealing a lower court’s decision that his records should be turned over to the committee. The Biden administration and the US House are unified in opposing the former President’s efforts to keep the records secret.”

“Donald Trump and his allies are starting to dangle the threat of the speakership over House Minority Leader Kevin McCarthy’s head, teeing up a yearlong dynamic that is already emboldening the MAGA wing of the GOP conference and influencing the California Republican’s decision-making as he crafts a strategy to win back the House next year,” CNN reports.

“Some in Trump’s orbit have even floated the wild — but technically possible — idea that the former President should make a play for the gavel. While it’s a highly unlikely scenario, the fact it’s even being teased in some conservative circles is putting McCarthy on notice and reminding Republicans of the leverage Trump still has over the party.”

“First she wants Rep. Adam Kinzinger get (R-IL), who is retiring, and Rep. Liz Cheney (R-WY) to be kicked out of the GOP Conference and effectively booted from their committee posts. Next, she wants the other 11 Republicans who voted for impeachment stripped of their leadership positions on committees.”

“A NASA spacecraft called DART has launched on a journey to change the orbit of an asteroid in deep space,” Axios reports.

“The mission is designed to test technology that could one day be used to change the course of a dangerous asteroid if one is ever found on a collision course with Earth.”

“The White House will on Wednesday nominate Shalanda Young to the position of budget director after months in which the key administration position has gone unfilled,” the Washington Post reports.

“Young has served as the acting director of the White House Office of Management and Budget since this spring, but the White House will now tap her to officially lead the agency as the administration faces multiplying challenges in implementing its economic agenda, the people said. She must be confirmed by the Senate to serve in the role, but she was confirmed to her current role by a 63-to-37 vote in March with support from more than a dozen Republicans.”

“Ninety-two percent of federal employees and military personnel have received at least one dose of coronavirus vaccine while nearly 5 percent more have asked for exemptions on religious or medical grounds,” the Washington Post reports.

Casey Newton: “Wow, they made a list of the dumbest people at Google.”

“Some of the organizers who planned the rally that took place on the White House Ellipse on Jan. 6 allegedly used difficult to trace burner phones for their most ‘high level’ communications with former President Trump’s team,” Rolling Stone reports.

“The three sources said Kylie Kremer took one of the phones and used it to communicate with top White House and Trump campaign officials, including Eric Trump, the president’s second-oldest son, who leads the family’s real-estate business; Lara Trump, Eric’s wife and a former senior Trump campaign consultant; Mark Meadows, the former White House chief of staff; and Katrina Pierson, a Trump surrogate and campaign consultant.”

“New Zealand plans to allow most fully vaccinated travelers into the country by the end of April without a mandatory hotel quarantine, as it slowly emerges from what has been one of the world’s longest lockdowns,” the New York Times reports.

“But those entering the country next year will face significant restrictions, with a mandatory seven-day home isolation period, as well as tests on departure and arrival.”

“In the final month of his presidency, Donald Trump signed off on key parts of an extensive secret Pentagon campaign to conduct sabotage, propaganda and other psychological and information operations in Iran,” Yahoo News reports.

Former Trump national security adviser Michael Flynn said that Covid was intentionally released on the world by “Global Elites,” but “their little plan with covid didn’t work” because “digital warriors” exposed the truth.

He added: “So I think what we’re going to see is potentially another type of virus that’s imposed on the public.”