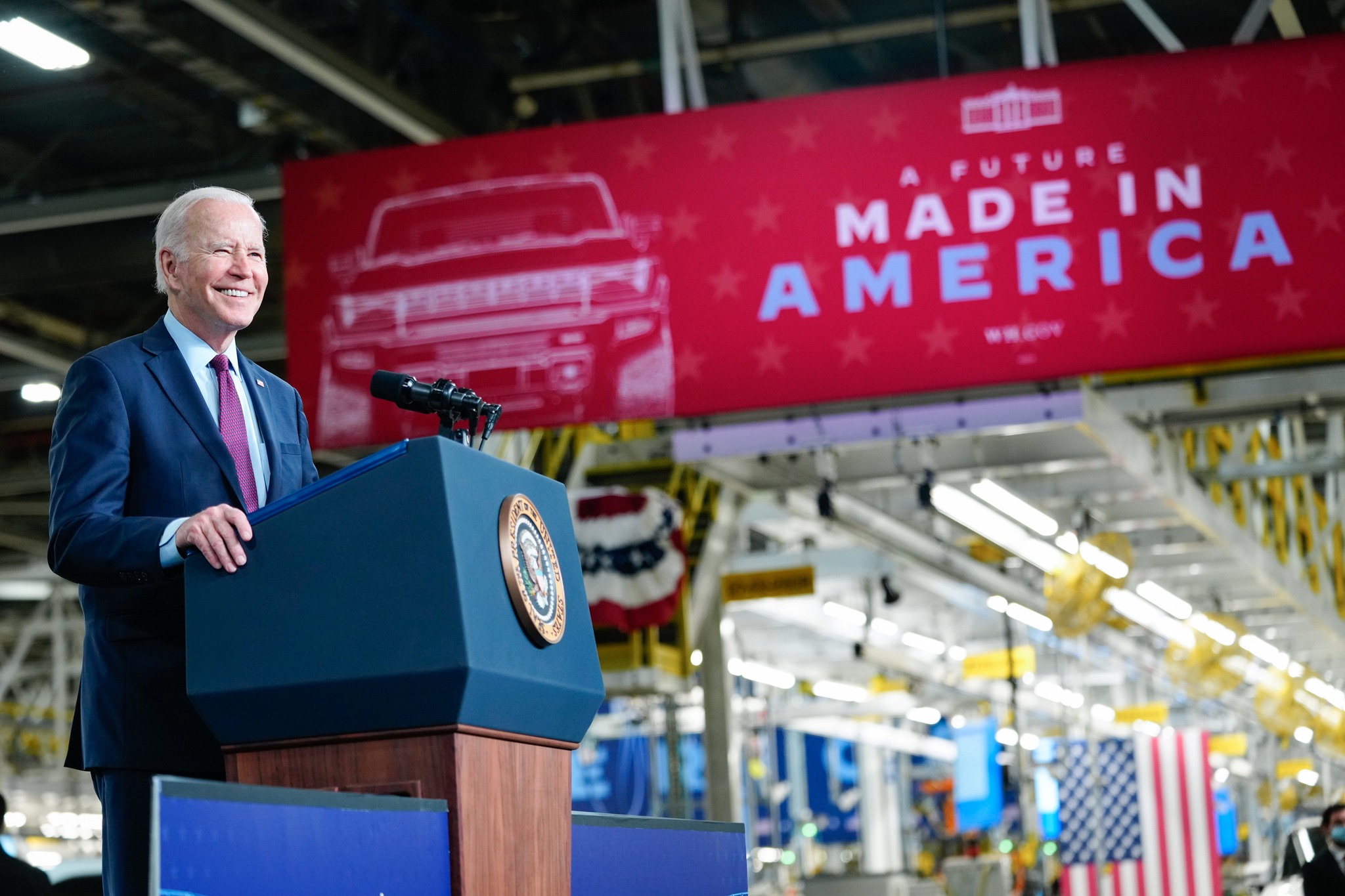 “Former President Donald Trump has taken his involvement in 2022 Republican primaries to a new level as he works to permanently mold the GOP in his image. Beyond Trump’s public efforts to oust Republican incumbents he considers disloyal, he has quietly tried to clear potential GOP threats to his endorsed candidates and encouraged others to run against his enemies,” CNN reports.

“Earlier this month, the former President enlisted the help of North Carolina Rep. Madison Cawthorn to persuade former Rep. Mark Walker to end his campaign for Senate and instead run for the House, which could help Trump’s preferred candidate in the GOP Senate primary, Rep. Ted Budd.”

“Trump has also had conversations in recent weeks with MAGA-aligned Republicans who are considering challenging GOP governors with whom he has grown disillusioned.”

TEXAS ATTORNEY GENERAL and FIRST CD. Texas Rep. Louie Gohmert, the legendary bomb-thrower who carried the far right’s banner in Congress before the tea party wave and the Donald Trump era reshaped the Republican caucus, announced Monday night that he would challenge scandal-ridden Attorney General Ken Paxton in the March primary rather than seek a 10th term.

Gohmert joins Land Commissioner George P. Bush and former state Supreme Court Justice Eva Guzman in trying to deny renomination to the Trump-endorsed incumbent. Meanwhile, another contender, state Rep. Matt Krause, ended his campaign the day after Gohmert’s entry and announced that he would instead compete in the open-seat race for Tarrant County district attorney. If no one wins a majority of the vote, a primary runoff would take place in late May.

Gohmert, like Paxton’s other foes, is hoping that the attorney general’s many ethical woes will give him a natural opening: The congressman attacked his new opponent as someone who only “started working harder after so many of his most honorable and very top people in the AG’s office left, complaining of criminal conduct.”

Paxton has been under indictment since 2015 for securities fraud (the case is still awaiting trial) and is reportedly under FBI investigation over unrelated allegations that he used his office to aid a wealthy ally in exchange for favors. He’s also facing a whistleblower lawsuit from several former senior aides who say they were fired after they reported Paxton’s actions to law enforcement.

To date, though, Paxton has very much looked like the primary frontrunner over both Guzman, who isn’t well-known, and Bush, who is—but has his own weaknesses with the party’s nativist base. An October YouGov poll showed Paxton beating Bush by a giant 54-18 margin, while a newer UT Tyler poll gave the attorney general a smaller 46-32 edge. But here’s no telling how things might change now.

Gohmert, in fact, surprised pretty much everyone on Nov. 9 when he revealed that he was trying to raise $1 million in 10 days for a potential campaign against Paxton, though in true Gohmert fashion he tried to unveil his plans with a link to a livestream that didn’t work. His website also failed at basic math by asking “100,000 citizens to send $100 each (or any other amount to get to $1,000,000) by November 19.”

The congressman was supposed to make an announcement on Nov. 19 on conservative radio host Mark Davis’ show, but he naturally never called in. On Monday evening, though, Gohmert finally divulged his intentions, and for once, his unveiling appears to have gone off without a hitch. He also declared that he’d “reached our initial goal of raising $1 million,” though he didn’t say whether he’d managed to do so during his self-imposed 10-day window.

Whether Gohmert wins or loses his next race, however, neither the House GOP leadership nor his Democratic colleagues are likely to miss him on Capitol Hill. Gohmert wasn’t always the lighting-rod he’s known as now, though. After he won the East Texas-based 1st District in 2004 by unseating conservative Democrat Max Sandlin in a seat that Republicans had just redrawn under the infamous DeLaymander, he attracted little attention for years.

Things began to change in 2010, though, when he went on CNN and claimed, without any evidence, that terrorists dwelling in America were raising “terror babies,” a phenomenon he said was a “gaping hole in the security of our country.” Gohmert evidently enjoyed his moment in the sun, since he soon became nationally known for his many offensive and bizarre rants. This included him:

The only people who might have loathed Gohmert more than progressives, though, may have been his nominal leaders. Gohmert, as Tim Alberta recounted in his book “American Carnage,” once tried to convince then-Majority Leader Eric Cantor to bring a birther-inspired bill to the floor by asking, “Kenya hear me? Kenya hear me?” Speaker John Boehner reacted to his antics by angrily musing, “Louie Gohmert is insane. There’s not a functional brain in there.”

The Texan thought little of Boehner as well. In 2013, Gohmert joined the attempted coup against the speaker by casting his vote for the top job for his former colleague Allen West, who had just lost re-election in Florida. (West has since moved to Texas and is currently waging a longshot primary campaign against Gov. Greg Abbott.) In 2015, Gohmert himself offered up his own name as an alternative to Boehner, but he only earned the support of two other members. Gohmert also opposed putting Paul Ryan in the speaker’s chair after Boehner resigned later that year.

One GOP leader who took to Gohmert with gusto, though, is Trump. The congressman not only has been an enthusiastic supporter of the Big Lie, he filed a since-dismissed lawsuit seeking to compel Mike Pence to interfere with the electoral vote count on Jan. 6.

Gohmert has also portrayed the insurrectionists as unarmed protesters who are being targeted by the Justice Department and has even unsuccessfully tried to visit some in prison. Last month, Rolling Stone reported that he was one of several GOP congressmen who’d had discussions with the planners of the Jan. 6 pro-Trump rally that preceded the attack, an allegation he denies.

For Texas Republicans, a disregard for the law may in fact be precisely the qualification they’re looking for in their state’s top law enforcement official. After all, just look at Paxton.

MASSACHUSETTS GOVERNOR. The Democratic firm Change Research’s new poll for Northwind Strategies, a Democratic firm that isn’t affiliated with any candidate in the governor’s race, finds Republican Gov. Charlie Baker leading Attorney General Maura Healey and former Rep. Joe Kennedy III by margins of 33-29 and 36-30, respectively. Healey is considering seeking the Democratic nod, while Kennedy has given no sign that he’s interested.

The poll also tests out a very hypothetical general election scenario in which Baker decides to run as an independent rather than stick with his GOP primary battle against Trump-backed former state Rep. Geoff Diehl. Change shows Baker outpacing Healey 32-26, with Diehl taking 21%.

MARYLAND GOVERNOR. Donald Trump’s blue state sabotage tour came to Maryland on Monday night when he issued an endorsement of Del. Dan Cox, who not only organized a bus of people to attend the infamous Jan. 6 rally that preceded the attack on the Capitol but also tweeted “Pence is a traitor” during the height of the violence.

Trump also used his not-tweet to take shots both at Cox’s intra-party foe, state Commerce Secretary Kelly Schulz (though of course he didn’t bother to spell her name right) and his longtime intra-party critic, termed-out Gov. Larry Hogan. “Dan is MAGA all the way — unlike his opponent, Kelly Schultz, who was handpicked by her ‘boss,’ RINO Larry Hogan, who has been terrible for our Country and is against the America First Movement,” Trump wrote.

Hogan, who hasn’t publicly taken sides in the primary, responded with a tweet of his own saying, “Personally, I’d prefer endorsements from people who didn’t lose Maryland by 33 points.” Cox, for his part, doesn’t seem to actually accept that Trump lost Maryland at all because he launched his campaign over the summer calling for a “forensic audit of the 2020 election.”

The Old Line State already offered Democrats one of their best gubernatorial pickup opportunities in the nation, and Team Blue’s path would likely be easier if Cox, whom Hogan slammed in January as “a QAnon conspiracy theorist who says crazy things every day,” won next June’s primary.

Cox might also benefit if former RNC chair Michael Steele, who outright backed Joe Biden last year, seeks the nomination as well, since Steele would be apt to split whatever exists of the non-Trump GOP vote with Schultz. Cox may be in luck: Maryland Matters reports that Steele “is expected to decide in the next week whether to enter the race.”

CALIFORNIA FOURTEENTH CD. Assemblyman Kevin Mullin on Tuesday became the latest candidate to announce a bid to succeed his fellow Democrat, retiring Rep. Jackie Speier, in this safely blue San Mateo County-based seat. Mullin, who worked as Speier’s district director when she was in the legislature, entered the race with an endorsement from fellow Assemblyman Phil Ting, who himself had been mentioned as a possible contender.

OREGON GOVERNOR. State House Minority Leader Christine Drazan announced Monday that she was joining next May’s Republican primary for governor. Her candidacy came weeks after the Willamette Week reported that unnamed party “power brokers” were trying to recruit her to run for a post that the GOP hasn’t held since 1987. Drazan, who previously served as executive director of the state House Republicans’ campaign arm, was only elected to the lower chamber in 2018 from a seat south of Portland, though from that perch, she quickly ousted the party’s previous leader. She then used her new authority in 2020 to organize a walk-out in order to deny the Democratic majority the quorum they needed to pass a climate change bill.

A new Dallas Morning News poll finds 23% of Texans are unwilling or unlikely to get the Covid-19 vaccine.

GEORGIA SECOND CD. Businessman Wayne Johnson, a former Trump official in the Department of Education, became the first notable Republican to join the race for Georgia’s 2nd Congressional District on Tuesday. Johnson ran in Georgia’s special Senate election last year but dropped out a month before Election Day. Republicans made the 2nd District, which is held by Democratic Rep. Sanford Bishop, slightly redder in redistricting: It would have gone 55-44 for Joe Biden, as opposed to 56-43 under the old lines. While this corner of southwestern Georgia is usually reliably blue, Bishop did suffer a scare in the 2010 GOP Wave, when he won re-election in a tight 51-49 scrape.

GEORGIA SIXTH CD. The Atlanta Journal-Constitution reports that Republican physician Rich McCormick, who had been gearing up for a rematch in Georgia’s 7th District after his narrow loss last year, will likely switch over to the open 6th District and may make an announcement next week. In their new map, Republicans gerrymandered the 6th to make it 26 points redder at the presidential level, prompting Democratic Rep. Lucy McBath to announce she’d run for re-election in the 7th, which is now commensurately bluer.

The AJC also says that state Sen. Greg Dolezal is considering joining the GOP primary, though there’s no direct word from him, while another Republican, state Rep. Will Wade, is a no.

GEORGIA SEVENTH CD. Gwinnett County Board of Education member Everton Blair, a Democrat who was reported to be considering a bid for Georgia’s redrawn 7th District, announced on Tuesday that he wouldn’t seek re-election to his current post. However, the Atlanta Journal-Constitution’s Greg Bluestein says that Blair is more likely to run for state schools chief, which makes sense, given that the 7th now features an incumbent-vs.-incumbent battle between Reps. Lucy McBath and Carolyn Bourdeaux.