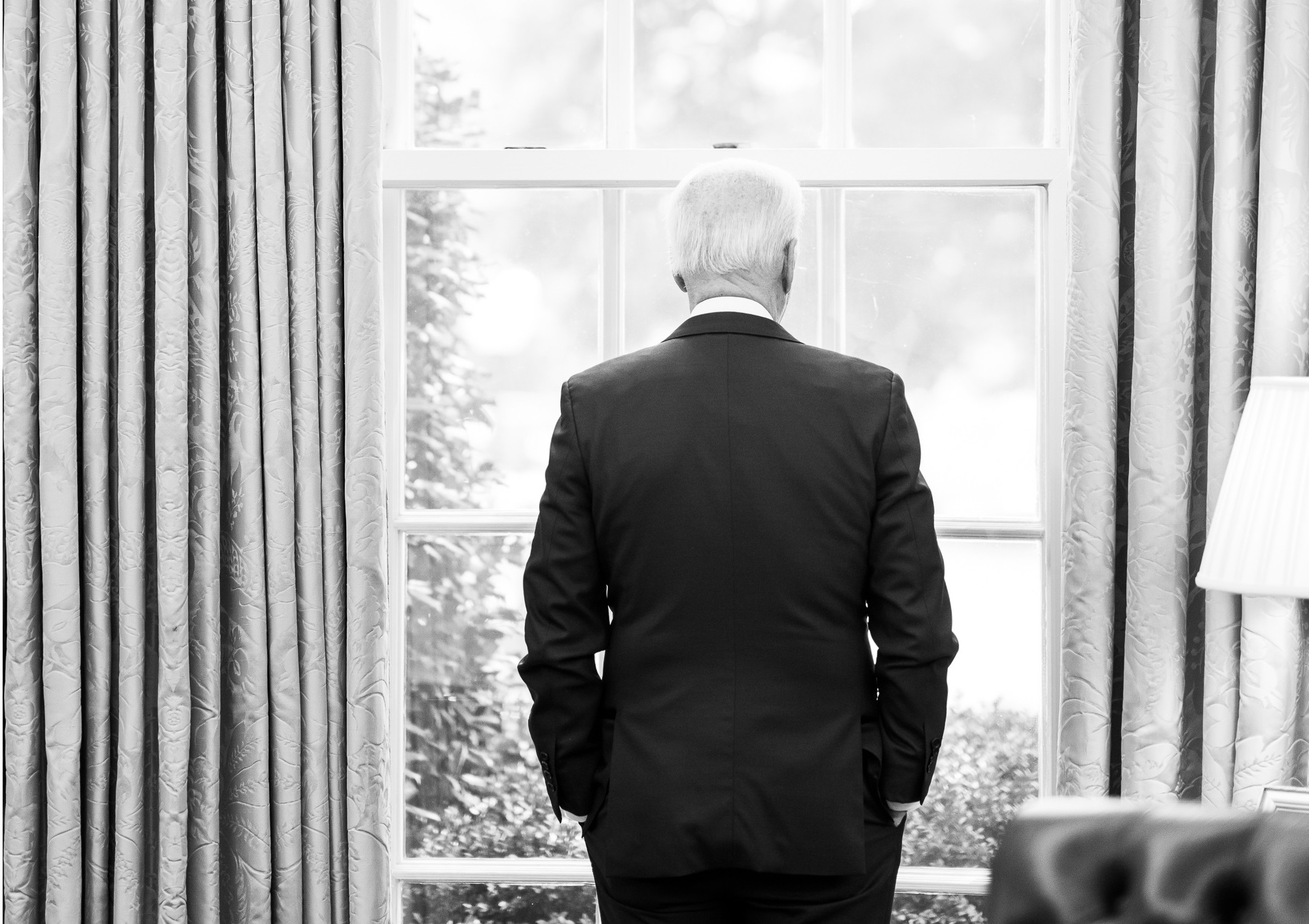 In the aftermath of the recent loss in Virginia’s governor’s race, Democratic strategists descended on the state to figure out what went wrong. Through focus groups and polling they found that voters “could not articulate what Democrats stand for. They could also not say what they are doing in Washington, besides fighting,” Politico reports.

“Less than a year ahead of midterm elections, in which even Democrats widely expect they will lose the House and, possibly, the Senate, the party is confronting an identity crisis.”

Rep. Louie Gohmert (R-TX) announced that he will run for attorney general in Texas in 2022.

“Former President Donald Trump’s yearlong campaign falsely claiming he won the 2020 election and demanding redress is turning voter fraud into a litmus test for Republicans seeking office as the party seeks to reclaim the House and Senate in 2022,” the Wall Street Journal reports.

“Mr. Trump has told advisers the issue will help the party win control of Congress next year and win back the White House in 2024. He has privately floated the possibility of an early presidential campaign announcement to underscore the message to conservative voters.”

“Many Republican candidates have fallen in line.”

An interesting side note is that Trump has privately said he doesn’t think Al Gore should have conceded in 2000.

Former New Jersey Gov. Chris Christie (R) told David Axelrod that Donald Trump’s lies about the 2020 election results were a “red line” for him, and that he has not spoken with Trump in nearly a year.

ARIZONA U.S. SENATOR. A new OH Predictive Insights poll in Arizona finds only 26% of Democrats said that they would prefer to keep Sen Kyrsten Sinema (D-AZ)as their senator, while another 72% chose a Democrat other than Kyrsten Sinema.

“The head of the Oklahoma Republican Party on Tuesday called on Republican National Committee chairwoman Ronna McDaniel to resign after she expressed the party’s commitment to the LGBTQ+ community at a gala earlier this month,” the Daily Beast reports.

Said Blanchard: “While I don’t comment on private conversations, the President’s endorsement is unquestionably the most powerful force in American politics and when he endorses candidates, they win.”

She added: “The MAGA Movement is the heart and soul of this nation. I entered the Senate race to serve Alabama’s people, and no matter what the future may bring, that will always be my main goal.”

“The Koch brothers are strategic; their voters are bananas. Our voters are moderate, but our funders are crazy.”  — A “leading Democrat” quoted by New York Magazine.

Former Trump fixer Michael Cohen, who is fresh out of house arrest, told CNN he doesn’t think Donald Trump will run for president in 2024.  Said Cohen: “His fragile ego cannot stand to be considered a two-time loser.”

GEORGIA SEVENTH and SIXTH CDs. Following passage of the GOP’s new congressional map on Monday, Democratic Rep. Lucy McBath announced that she’d seek re-election in the new 7th District in the Atlanta suburbs, setting up an incumbent-vs.-incumbent battle in next year’s Democratic primary.

Undermining McBath’s old 6th District was a chief of aim Georgia Republicans, who made it much redder by gerrymandering it to take in far-flung rural areas. Under the old lines, the 6th went 55-44 for Joe Biden; the new version, by contrast, would have backed Donald Trump 57-42, according to Dave’s Redistricting App.

“It is no mystery why Republicans and the NRA have decided I’m their top target,” McBath said in a statement. “As a Black woman, activist, and mother on a mission—they would like nothing more than to stop me from speaking truth to power about the gun lobby and Republican Party in Congress.”

At the same time, the GOP redrew the neighboring 7th to take in as many Democratic voters as possible, transforming it from a seat that Joe Biden won just 52-46 into far bluer turf he would have carried 62-36, per DRA.

McBath’s decision, though, means she’ll face fellow Rep. Carolyn Bourdeaux for the Democratic nomination, and likely others as well. State Rep. Donna McLeod said on Monday that it’s “my intention to run” in the 7th, and the Atlanta Journal-Constitution’s Greg Bluestein says that Gwinnett County Board of Education member Everton Blair is considering a bid as well. (Georgia requires runoffs in primaries where no one wins a majority of the vote.)

On paper, Bourdeaux would appear to start off with a considerable advantage: She already represents 57% of the new 7th while McBath represents just 12%. Bourdeaux’s slice of the 7th is also much bluer: It voted 63-36 for Biden while McBath’s portion went for Biden 55-45. In raw numbers, that means there are roughly 109,000 Biden voters from Bourdeaux’s old district now living in the new one versus just 27,000 from McBath’s.

But McBath brings a higher profile to the race: After her son was murdered by a gunman in 2012, McBath, then a flight attendant, became a prominent advocate for gun safety as a spokesperson for the group Moms Demand Action. Spurred by the mass school shooting in Parkland, Florida in 2018, she decided to run for Congress and that fall unseated Republican Rep. Karen Handel—who just a year earlier had narrowly won a nationally followed special election against Democrat Jon Ossoff. (McBath easily beat Handel in a rematch last year.)

Bourdeaux, meanwhile, was the only Democrat to flip a House seat without the aid of redistricting in 2020, picking up the 7th after Republican Rep. Rob Woodall decided to retire; a cycle earlier, she’d held Woodall to a 433-vote win following a recount, the closest congressional race in the nation that year. Bourdeaux may, however, have miscalculated about the direction the GOP’s new map would take: Over the summer, she joined a group of nine renegade Democratic moderates who threatened to derail Biden’s Build Back Better agenda if they didn’t get a vote on Congress’ bipartisan infrastructure bill first.

McBath, by contrast, held firm with the vast majority of her caucus, putting her in the mainstream of her party—and far more in-tune with progressive primary voters. That also helped earned her an endorsement from Stacey Abrams, well-known as a force in Georgia politics.

VERMONT U.S. SENATOR and AT LARGE CD. Rep. Peter Welch, who has represented Vermont’s only House seat since 2007, announced Monday that he would run to succeed his fellow Democrat, retiring Sen. Pat Leahy.

Welch quickly earned the backing of Sen. Bernie Sanders, a move that could help him avoid a competitive primary in this very blue state. The only notable politician who had expressed any interest in taking Welch on an intra-party contest was state Rep. Tanya Vyhovsky, but she said last week that she wouldn’t enter the race if Sanders endorsed the congressman.

The August primary to succeed Welch in the House, though, will likely be far more eventful, especially since the winner could end Vermont’s status as the only state that still hasn’t elected a woman to either chamber of Congress. Both state Sen. Kesha Ram Hinsdale and Lt. Gov. Molly Gray said Monday that they were thinking about House bids, with Gray saying she would consider it over Thanksgiving. Seven Days also says that Senate President Pro Tempore Becca Balint has expressed interest as well, though there’s no quote from her.

The candidate filing deadline isn’t until May, so this race could take a while to come together.

MICHIGAN GOVERNOR. Kevin Rinke, a wealthy businessman who has committed to spending at least $10 million of his own money, announced Monday that he would seek the Republican nomination to take on Democratic Gov. Gretchen Whitmer. Rinke’s candidacy is unwelcome news to former Detroit Police Chief James Craig, the GOP frontrunner who now will need to go through an expensive August primary battle; a few other Republicans are also in, though they don’t appear to have gained much traction yet.

Rinke, whose family owns several car dealerships in the Detroit area, launched his bid with what AdImpact reports is a $225,000 TV buy. The new candidate, unsurprisingly, leaned into his background by appearing in a 1969 Pontiac GTO muscle car and comparing Whitmer’s administration to the infamous Yugoslavian-made Yugo. Rinke also joined fellow Republicans in, among other things, taking shots at Whitmer’s public health measures and winking at the Big Lie with his rant against “a tyrannical government, closed small businesses, illegal immigration, voter fraud, critical race theory.”

“More than three months after he resigned in disgrace, former New York Gov. Andrew Cuomo exists in political limbo — not completely written off as a spent force, but sidelined as the campaign to replace him heats up,” CNN reports.

“But even in exile from the capitol, Cuomo casts a long shadow.”

Said state Sen. Andrew Gounardes (D): “There’s always the possibility of mischief and mayhem, especially with someone who is hellbent on retribution, but I think that that will only get legs if we allow it to.”

RHODE ISLAND GOVERNOR. Secretary of State Nellie Gorbea has publicized a survey from Lake Research Partners that shows Gov. Dan McKee edging her out just 26-24 in the Democratic primary, with Treasurer Seth Magaziner at 16% and no one else hitting double digits. This is the first poll we’ve seen of next September’s contest.

TEXAS GOVERNOR. UT Tyler’s newest survey of the March Republican primary for The Dallas Morning News shows Gov. Greg Abbott well ahead with 65%, while no one else exceeds 6%.

The firm, unfortunately, once again did not identify any candidate’s party affiliation in the general election portion of the poll, which is something we require for a survey to be written up in the Digest. As we’ve written before, if a pollster doesn’t include this in a partisan election, then they’re leaving out important information and failing to accurately mimic the way voters will make their choices when they actually cast their ballots.

Molly Jong Fast: “To improve Biden’s popularity, earnest consultants might tell him to work on the fundamentals. But the fundamentals are actually good: The economy is getting better. Americans have both cash and jobs. Sure, inflation is an issue, but it’s a global phenomenon and not unexpected, because we’re coming out of a pandemic. The disconnect between the facts and the polls suggests that Biden’s true problem is a narrative one. Specifically, he doesn’t have an enemy, a punching bag to absorb Americans’ anger (rational or irrational).”

Said James Carville: “As of now the White House does not have good story tellers. Good stories need villains.”

VIRGINIA SEVENTH CD. Republican Del. John McGuire used a Friday night fundraising email to announce that he’ll launch a second campaign against Democratic Rep. Abigail Spanberger in a seat that has yet to be drawn. It also remains to be seen if the GOP will be selecting its nominee through the convention system that thwarted McGuire last year, through a traditional primary, or a party-run “firehouse primary.” McGuire ran for Congress in 2020 but lost the convention 56-44 to fellow Del. Nick Freitas, who went on to lose to Spanberger 51-49.

McGuire went on to attend the infamous Jan. 6 Trump rally that preceded that day’s attack on the Capitol. The delegate said he only learned about the violence from the news after he got home, though Blakely Lockhart, McGuire’s Democratic opponent in his successful re-election contest this month, released a photo of him near men in paramilitary gear being confronted by the police. McGuire himself also continued to fan the Big Lie this summer when he wrote that voters “are nervous their votes are not counted in a free and fair way.”