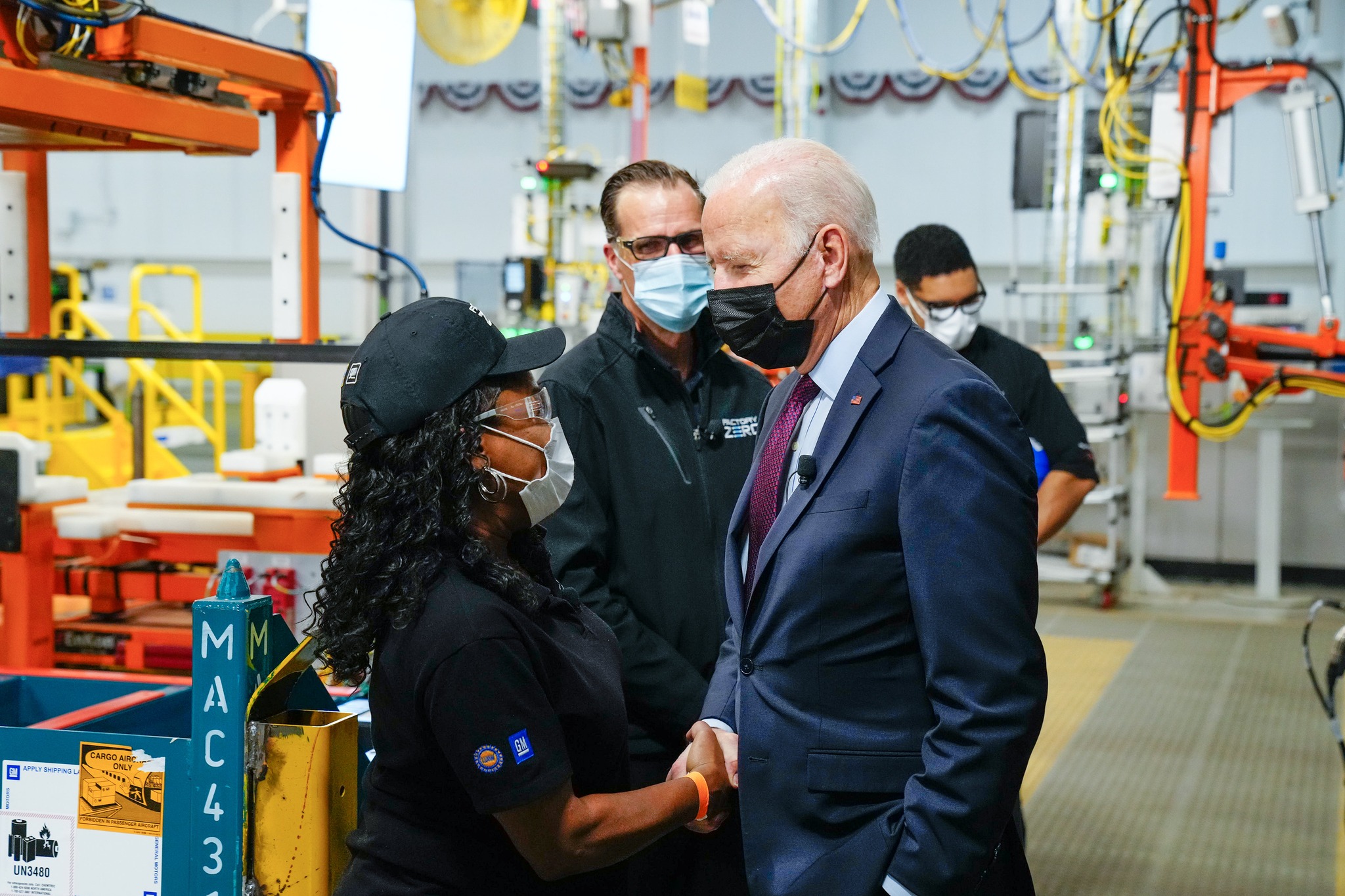 By nearly 2-to-1, all voters would be more likely to support Matthew McConaughey than O’Rourke as Abbott’s challenger.

But in a hypothetical three-way general election contest, Abbott is the choice of 37%; McConaughey 27%; and O’Rourke 26%. 10% of voters want someone else.

O’Rourke said he stands by his controversial 2019 comment that “we’re going to take your AR-15, your AK-47,” The Hill reports.

Said O’Rourke: “Look, we are a state that has a long, proud tradition of responsible gun ownership. And most of us here in Texas do not want to see our friends, our family members, our neighbors shot up with these weapons of war. So yes, I still hold this view.”

GEORGIA SIXTH and SEVENTH CDs. Rep. Lucy McBath (D-GA) “will run for Congress in a neighboring suburban district after Republicans redrew her congressional seat to be a conservative bastion, a move that will set up a potential showdown against another rising Democratic star in Georgia’s U.S. House delegation,” the Atlanta Journal Constitution reports.

McBath said “that she’ll run in the 7th District, swing territory now held by fellow Rep. Carolyn Bourdeaux (D-GA) that has been refashioned by Georgia’s Republican-controlled Legislature into a safe Democratic seat based in Gwinnett County.”

Said McBath: “I refuse to let Brian Kemp, the NRA and the Republican Party keep me from fighting. They are not going to have the last word.”

PENNSYLVANIA U.S. SENATOR. Pennsylvania Senate candidate Sean Parnell (R) “has lost his battle for custody of his three children after his estranged wife accused him of physical and verbal abuse, a ruling likely to deal a devastating setback to his campaign,” the Philadelphia Inquirer reports.

“Parnell had been a leading GOP contender, endorsed by former President Donald Trump, in the race to succeed Pennsylvania Republican Sen. Pat Toomey. His allies had hoped a favorable ruling in the custody case would help discredit the abuse accusations that he had denied under oath.”

As a result, Parnell has ended his campaign. Trump will have to find another violent sociopath to support, as is his standard practice.

Several other Republicans are currently competing in the May primary in this closely-watched Senate race, but Politico says that each of them has drawbacks. Jeff Bartos, the 2018 nominee for lieutenant governor, has argued that the allegations against Parnell make him “unelectable,” a line that could turn off both Donald Trump and Parnell’s backers.

Former Ambassador to Denmark Carla Sands, meanwhile, has been spending millions of her own money on ads, but Politico writes that she “has not gained much traction.” A few others are also in including author Kathy Barnette, a Big Lie promoter who badly lost in the safely blue 4th Congressional District last year, but they also don’t appear to have made much of an impression, either. The good news for Parnell’s intra-party critics is that there’s plenty of time before the March filing deadline for new candidates to enter the race.

The bad news, though, is that one of those new candidates may be Mehmet Oz, the TV personality who has a long history of dispensing what medical experts have warned is false advice. The conservative Washington Free Beacon reported earlier this month that Oz was getting ready to run even though the longtime New Jersey resident has little connection to Pennsylvania, and Politico confirms that he’s been looking for a home in the Philadelphia area; Oz cast his ballot in New Jersey last year, though he registered to vote in the Keystone State two months later.

Oz, the story says, hasn’t yet committed to a Senate campaign, and several of his fellow Republicans hope he won’t. One strategist relayed, “There’s no one who thinks the solution to the Sean Parnell issue is Dr. Oz.” Other party officials, including some chairs in voter-rich counties, revealed that he hadn’t even contacted them yet, while an unnamed source close to the NRSC said they didn’t believe national Republicans had spoken to him either.

Some hostile party operatives aren’t waiting, though, to spread opposition research about Oz, including his March 2020 quote calling for the United States to follow China’s example by imposing temporary lockdowns to slow the pandemic. If he runs, his foes are also likely to remind voters that Oz called himself a “moderate Republican” back in 2007.

A few other Republicans could also get in. Politico says that former Rep. Keith Rothfus, who badly lost re-election in an incumbent vs. incumbent 2018 race against Democrat Conor Lamb (who is currently running for the Senate himself), is interested in competing in a Parnell-free primary. Rothfus merely said, “Simply put, Sean Parnell has no plans to drop out of the race for Senate,” and he didn’t respond to follow-up questions.

Hedge fund manager David McCormick also has reportedly been looking at running, though the Connecticut resident has yet to say anything publicly. Insiders don’t seem to agree what he’s up to, either: the Philadelphia Inquirer’s Jonathan Tamari tweets that “the info on him runs the spectrum from likely to enter the race soon to definitely not.” Finally, while Politico said back in March that attorney John Giordano and former Secretary of the Nav Kenneth Braithwaite were each interested, it now notes that so far, those “campaigns haven’t materialized.”

Faulconer spent years as one of the only Republican rising stars in this dark blue state, but this September’s recall campaign against Newsom saw him plummet hard to earth. Faulconer took a distant third place with just 8% in the race to replace Newsom, a question that didn’t even end up mattering because a 62-38 majority voted against ousting the governor.

MASSACHUSETTS GOVERNOR. YouGov’s poll for UMass Amherst and WCVB again finds Republican Gov. Charlie Baker with only a modest lead in a hypothetical general election against Democratic Attorney General Maura Healey but well ahead of four other foes; just like in March, though, a huge portion of respondents are undecided in each trial heat, which makes it especially difficult to tell how much danger Baker might actually be in if he were to run for a third term.

The latest numbers are below, with the March results in parentheses:

YouGov’s prior poll did not include Silva, whose candidacy has attracted very little attention.

Neither Baker, who faces Trump-backed primary opposition from 2018 Senate nominee Geoff Diehl, nor Healey has announced if they’ll be running for governor next year. The Bay State’s candidate filing deadline isn’t until May, but as Politico’s Lisa Kashinsky notes, prospective Democratic candidates would need to make their moves a whole lot sooner than that because the process of choosing delegates to the state party convention, which plays a role in determining ballot access, starts in early February.

P.S. YouGov also tests out general election scenarios where Lt. Gov. Karyn Polito is the GOP nominee instead of Baker. Polito leads four of the five Democrats, but an outright majority of respondents are undecided in each matchup. Healey, meanwhile, leads Polito 35-19, with a 38% plurality marking themselves as unsure.

PENNSYLVANIA GOVERNOR. Both ABC27 and Lancaster Online report that former state House Speaker Mike Turzai has decided to enter the packed May Republican primary for governor.

Turzai spent much of 2017 deliberating about whether to run for the state’s top job only to drop out after just three months on the campaign trail. He said in 2019 that he was “very positive” about running again, but we heard nothing new from him following his decision the following year to resign from the legislature.

ILLINOIS SIXTH CD. Orland Park Mayor Keith Pekau has filed FEC paperwork for a potential bid for the Republican nod in a new constituency where most of the action has been on the Democratic side.

Two Democratic incumbents, Sean Casten and Marie Newman, are competing in the June primary for the new version of this 55-44 Biden constituency. The portion of the new 6th located in Casten’s district (also numbered the 6th) backed Biden 59-39, while the section in Newman’s existing 3rd District supported him by a much smaller 51-47 spread.

However, Newman currently represents far more of the new 6th than Casten does, and her area still contains a larger number of Democratic general election voters. The portion of the 6th held by Newman cast 78,500 votes for Biden, compared to 60,200 in her rival’s area.

OREGON SIXTH CD. Oregon Medical Board chair Kathleen Harder has announced that she’ll seek the Democratic nod for this new seat. Harder lost a close 2017 race for the Salem-Keizer Public Schools school board, a contest where she was attacked by the prominent anti-abortion group Oregon Right to Life. Democratic Gov. Kate Brown appointed her a few months later to the Oregon Medical Board.

Two other Democrats, state Rep. Paul Evans and former state Rep. Brian Clem, have also confirmed that they’re considering running for the 6th District. Willamette Week describes Clem as a moderate who can self-fund. He announced last month that he was resigning from the legislature to take care of his mother, but Clem says he’s giving a congressional bid “careful consideration.”

New York Times: “This month, Republicans broadly advanced in elections across the country, especially in Virginia, prompting forecasts of a similar tide in 2022. Glenn Youngkin won the Virginia governorship after emphasizing the rights of parents to control how schools operate and what they teach.”

“But Mr. Youngkin’s chief strategist, Jeff Roe, said the “big takeaway” of the election was how the rising cost of living had significantly motivated voters, an issue that was little covered by the news media. He predicted it would drive Senate and House races around the country next year (many of which he and his firm have a hand in).”

Axios: “America’s supply chain crisis, which has driven prices higher and made all sorts of goods harder to find, may last long after the holiday season.”

Punchbowl News: “This recess brings a bit of a temporary reprieve to Washington. Lawmakers depart for the holiday, leaving staffers to scramble drafting legislation and setting up hearings for December. Codels are heading all over the world.”

“But this holiday also tends to bring another dynamic to the fore — retirements. Members of Congress, facing political uncertainty or peril, remember how good it is to be back at home. Other opportunities pop up and they seem better than serving in a deeply divided, unhappy Congress. Once-a-decade redistricting also is playing a role this year. And potentially losing the majority will influence veteran Democrats in the coming weeks and months.”

Wall Street Journal: “Mr. Trump has also met with Lynda Blanchard, a former ambassador in his administration, and discussed a possible endorsement if she abandoned her U.S. Senate campaign and instead challenged Alabama’s Republican governor, Kay Ivey.”

“Mr. Trump has privately blamed Ms. Ivey for a state commission decision to block the former president from holding a rally in July at USS Alabama Battleship Memorial Park, which includes a World War II battleship and other historic military aircraft.”

“Nearly half of Republican voters support federally decriminalizing cannabis, and GOP lawmakers are now beginning to reflect their constituents’ view by increasingly supporting broad legalization at the state and federal level,” Politico reports.

“Stronger Republican involvement could hasten a snowball effect on Capitol Hill, where Democrats lead the charge on decriminalization but lack results.”