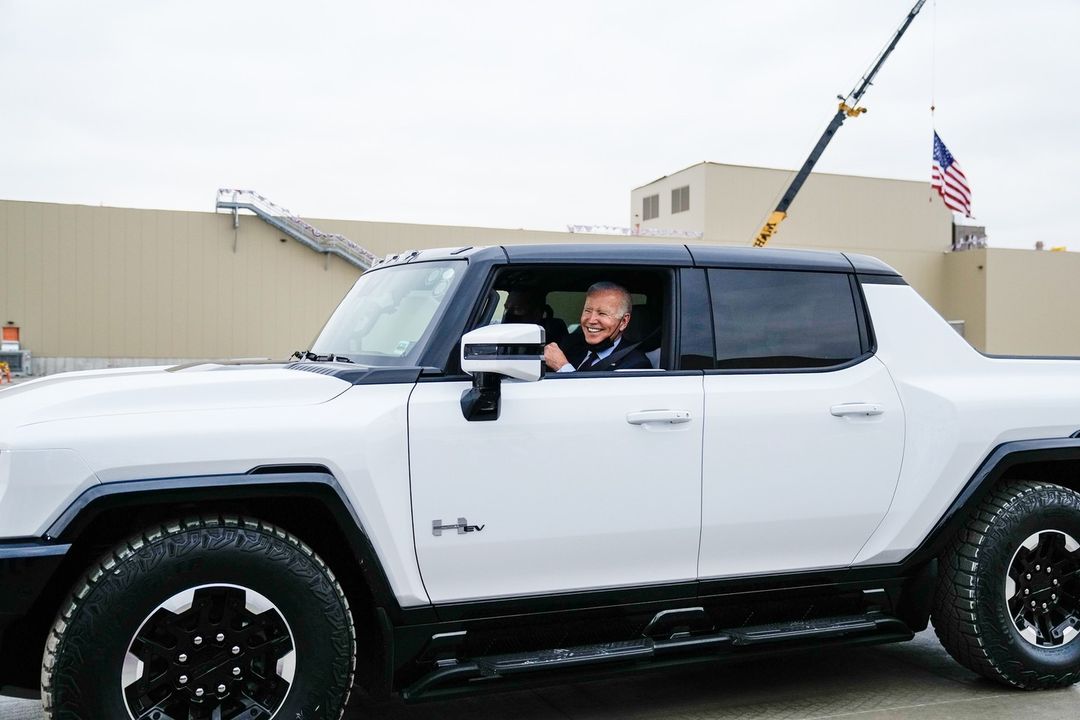 “President Biden and members of his inner circle have reassured allies in recent days that he plans to run for reelection in 2024, as they take steps to deflect concern about the 79-year-old president’s commitment to another campaign and growing Democratic fears of a coming Republican return to power,” the Washington Post reports.

“The efforts come as the broader Democratic community has become increasingly anxious after a bruising six-month stretch that has seen Biden’s national approval rating plummet more than a dozen points, into the low 40s, amid growing concerns about inflation, Democratic infighting in Washington and faltering public health efforts to move beyond the covid-19 pandemic.”

“Kimberly Guilfoyle, a top fundraiser for former President Donald Trump and the girlfriend of his son Donald Trump Jr., boasted to a GOP operative that she had raised $3 million for the rally that helped fuel the Jan. 6 Capitol riot,” ProPublica reports.

“In a series of text messages sent on Jan. 4 to Katrina Pierson, the White House liaison to the event, Guilfoyle detailed her fundraising efforts and supported a push to get far-right speakers on the stage alongside Trump for the rally, which sought to overturn the election of President Joe Biden.”

The draft map the GOP legislature released this week makes the 2nd District, which is located in the state’s southwestern corner, more conservative, but it still remains blue turf overall. Joe Biden carried the proposed 2nd District 55-44 according to political analyst Niles Francis, while he took the current version of the seat 56-43.

GEORGIA SIXTH CD. Republican Rich McCormick, who lost a tight 2020 general election to Democrat Carolyn Bourdeaux for the current version of the 7th Congressional District, says he’s interested in running for the 6th District now that the GOP legislature has released a draft map that gerrymanders it into a very red constituency.

The Atlanta Journal-Constitution also writes that state Sen. Brandon Beach is “courting Donald Trump’s support” for a potential congressional campaign of his own, though he doesn’t appear to have publicly expressed interest yet. Last cycle Beach launched a campaign against Democratic Rep. Lucy McBath in the current confines of the 6th, but he dropped out almost a year before Election Day and ran for re-election to the legislature.

Beach, though, seems to have begun auditioning for a Trump endorsement long before now. While one Democrat once told the AJC’s Bill Torpy that Beach “has been every Democrat’s favorite Republican,” he shed that image by becoming one of the biggest proponents of the Big Lie in Georgia. In January, Beach was one of the three senators who got ​​booted as chair of a key committee by fellow Republicans for leading an effort to overturn last year’s election. One of Beach’s Democratic colleagues, Elena Parent, expressed her surprise at the course of his career, saying, “It’s either a political calculation or opportunism, or he has lost his mind.”

The AJC also name-drops state Rep. Will Wade as another possible GOP candidate.

But the big name, of course, is far-right Rep. Madison Cawthorn, who is running here even though his current 11th District makes up just 12% of this new constituency. We haven’t seen any polls so we don’t know how primary voters are reacting to Cawthorn’s move, but the past and present party officials who spoke to the Charlotte Observer’s Will Wright did nothing to hide their disgust.

Matthew Ridenhour, another former member of the Mecklenburg County Commission, was particularly angry with Cawthorn for saying he needed to campaign here because his absence could mean that “another establishment, go-along-to-get-along Republican will prevail there.” Ridenhour said, “Voters in the new 13th don’t need some savior swooping in to rescue them from themselves” and called the congressman’s declaration “an insult to the people of the 13th.” Former state Rep. Charles Jeter piled on with, “A lot of folks in the Republican Party recognize that, frankly, if Madison Cawthorn is the future of the Republican Party then the Republican Party doesn’t have a future.”

COLORADO EIGHTH CD. Republican state Sen. Barbara Kirkmeyer announced this week that she was running for this new open swing seat in the Denver suburbs. Kirkmeyer, unlike most Republican candidates this cycle, actually acknowledges that Joe Biden won the presidency, though she less surprisingly attacked his vaccination mandate. She joins Weld County Commissioner Lori Saine, who made a name for herself as one of the Colorado GOP’s most extreme members during her eight years in the state House, in the June primary.

Kirkmeyer herself is a former member of the Weld County commission, where she backed a failed 2013 push for her constituents to join other northeast Colorado counties in creating a 51st state. Kirkmeyer ran for the House the following year in the current 4th Congressional District but took a distant third with 16% of the vote; the winner, with 44%, was Ken Buck, who still holds the seat.

On the Democratic side, EMILY’s List has endorsed state Rep. Yadira Caraveo, who faces Adams County Commissioner Chaz Tedesco in the primary.

INDIANA FIFTH CD. Former Democratic state Rep. ​​Melanie Wright said Monday that she was ending her month-long campaign against Republican Rep. Victoria Spartz in favor of running for the state Senate. Wright’s old GOP colleagues in the legislature did everything they could to secure the 5th District with a new gerrymander that transforms it from a seat Donald Trump carried just 50-48 to one he took 57-41.

CALIFORNIA FOURTEENTH CD. A few Democrats have already expressed interest in running in the June top-two primary to succeed Rep. Jackie Speier, who announced her retirement on Tuesday. The current configuration of this seat, which contains most of San Mateo County and some of San Francisco to the north, backed Joe Biden 78-20, and the new district will likely look very similar when redistricting is done. California’s filing deadline is in mid-March.

Two Democrats, San Mateo County Board of Supervisors President David Canepa and Burlingame Councilmember Emily Beach, have each announced that they’re running in the June top-two primary for this safely blue San Mateo County-based seat. State Sen. Josh Becker also acknowledged his interest, saying, “I will be talking with people in the next few days.”

Assemblyman Kevin Mullin, who worked as Speier’s district director when she was in the legislature, tweeted Wednesday that he was also thinking about it and would “have more to say about the race soon.”

State Sen. Josh Becker also didn’t rule out the idea when asked, while Redwood City Councilmember Giselle Hale, who is also an executive at the firm Political Data Inc., said she was waiting for redistricting to conclude before deciding. San Mateo County Supervisor Dave Pine, meanwhile, did not respond to Politico’s inquiry about his interest.

MAINE SECOND CD. Republican Liz Caruso, a longtime opponent of the Central Maine Power hydropower corridor project who was a spokesperson in last month’s successful Question 1 campaign to block it, announced this week that she was joining the June GOP primary to take on Democratic Rep. Jared Golden. Caruso is also a selectman in Caratunk, a community with a population of about 70. (And you thought New Hampshire state representatives had tiny constituencies.)

Golden’s most prominent adversary is former Rep. Bruce Poliquin, a Republican who has never recognized his 2018 loss. Poliquin outraised Golden $880,000 to $635,000 during the opening quarter of their rematch, though the incumbent ended September with a $1.3 million to $870,000 cash-on-hand edge. State Rep. Mike Perkins is also running for Team Red, but he had a paltry $25,000 available at the end of the third quarter.

NORTH CAROLINA SIXTH CD and U.S. SENATOR. State Sen. Valerie Foushee announced Wednesday that she was entering the race to succeed her fellow Democrat, retiring Rep. David Price, in the new version of this safely blue seat in the Chapel Hill-Durham area. Foushee, who back in 2004 became the first Black woman elected to the Orange County Board of Commissioners, kicked off her campaign with endorsements from state Sens. Natalie Murdock and Mike Woodard, who had previously shown some interest in running here themselves.

Virologist Richard Watkins also said Wednesday that he was dropping his campaign for the Senate in order to run for the 6th District. Watkins in 2018 took 6% in his long-shot primary campaign against Price, and he had just $60,000 on-hand in September for his latest campaign.

NORTH CAROLINA FOURTEENTH CD. Republican state Sen. Ralph Hise has confirmed that he’s interested in running for this open seat in western North Carolina. Hise is the author of the new GOP gerrymander that passed earlier this month, though he says he was caught by surprise along with everyone else when Rep. Madison Cawthorn announced days later that he’d run for the 13th District instead of here.

Local Republican Party official Michele Woodhouse, who chairs the GOP in the current 11th Congressional District, has announced a bid for the new 14th District.

Woodhouse, who is related by marriage to the notorious former state party executive director Dallas Woodhouse, doesn’t appear to have run for office before, but she could benefit from her connections in this western North Carolina constituency. According to calculations from Daily Kos Elections, 93% of the population in the new 14th District lives in the existing 11th District.

PENNSYLVANIA SEVENTH CD. Republican state Rep. Ryan Mackenzie has filed FEC paperwork for a potential bid against Democratic Rep. Susan Wild. Mackenzie campaigned for Congress back in 2018 when GOP Rep. Charlie Dent retired, but he dropped out well before the primary.

INDIANA EIGHTH CD. While Republican Rep. Larry Bucshon indicated back in January of 2019 that his sixth term might be his last, this week he went ahead and announced he’d be running for term number seven in the new 8th District. Previous versions of this southern Indiana seat bore the nickname “The Bloody Eighth” because of their habit of ousting incumbents from both parties, but gerrymandering and the area’s turn to the right have made this 65-33 Trump constituency very antiseptic.

TEXAS THIRTY-FOURTH CD. Democratic state Rep. Alex Dominguez said Wednesday that he would run for an open seat in the state Senate instead of for Congress. Dominguez showed some interest last month in campaigning for the 34th Congressional District, but he started to back off after Democratic Rep. Vicente Gonzalez decided to run here instead of in the 15th District.

ILLINOIS FOURTEENTH CD. Conservative radio host Michael Koolidge has announced that he’ll run for the Republican nomination to take on Democratic Rep. Lauren Underwood. The new version of this seat in the Chicago exurbs backed Joe Biden 55-43, while the current seat with the same number supported him just 50-48.