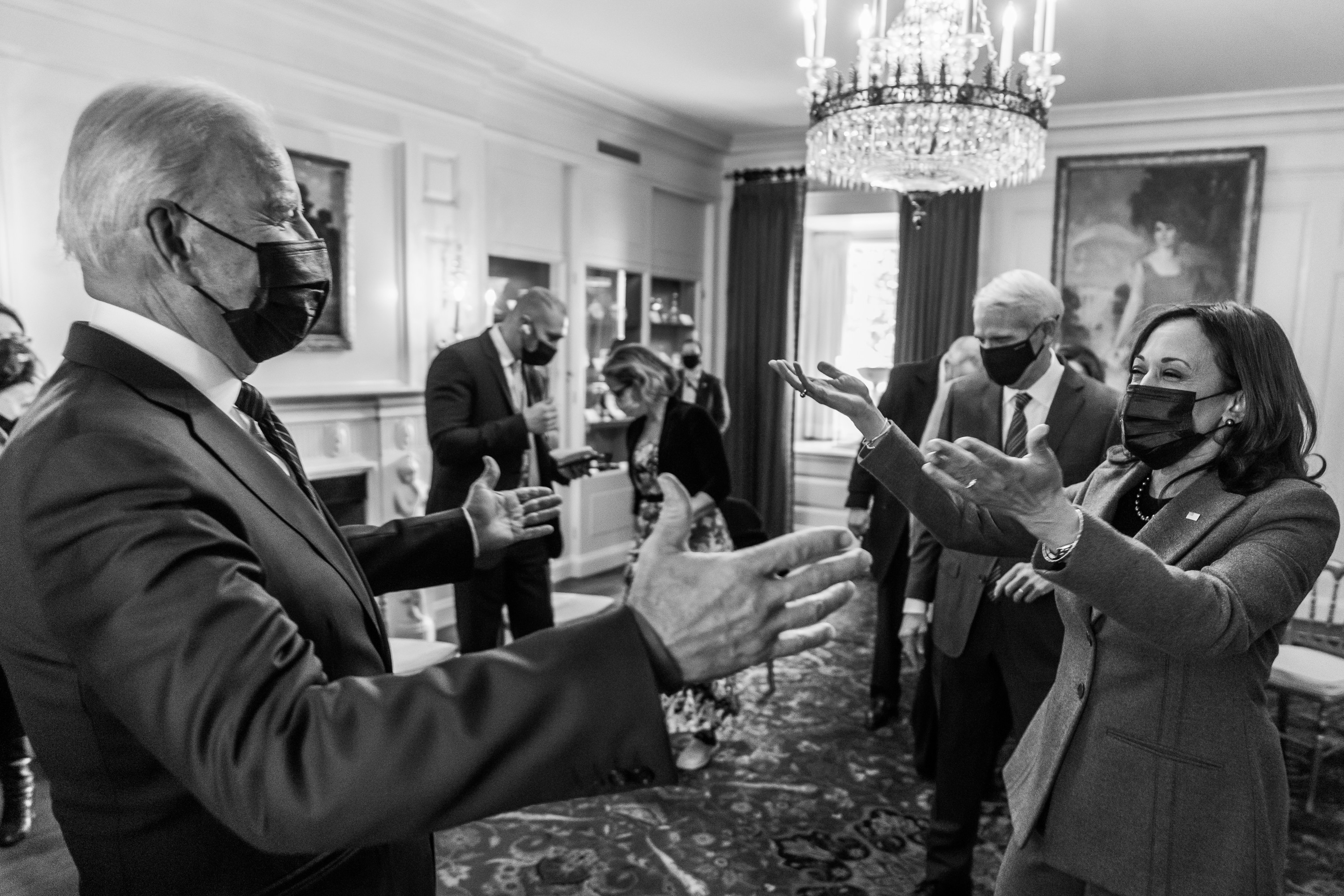 “President Biden on Friday announced his nominees to replace two members — and allies of Postmaster General Louis DeJoy — of the USPS board of governors,” Axios reports.

Washington Post: “The move was a surprise to postal officials and even members of Congress, according to three people with knowledge of the matter, and casts doubt on DeJoy’s future at the agency. It potentially gives liberals on the panel two crucial votes to oust the postal chief, who can be removed only by the board. The people spoke on the condition of anonymity to speak freely about private discussions.”

Washington Post: “The burst of progress on Biden’s economic agenda comes amid unresolved strains that the administration in recent months has struggled to confront, with high inflation emerging as a top concern for American voters amid the biggest price hikes in nearly three decades. Republicans have blamed the inflation problems on Biden’s economic agenda, but there are signs that the White House could soon push back more forcefully, saying that large corporations are partly to blame for the dramatic increase in costs.”

“White House aides also are hopeful that coronavirus booster shots, the authorization of vaccines for younger children, and predictions of fast economic growth for 2022 could represent a major turnaround.”

“Some Republican lawmakers have been pressing the U.S. to step up military support for Ukraine. But that risks turning what may be mere muscle-flexing by Russian President Vladimir Putin into a full-blown confrontation that only adds to the peril for Ukraine and could trigger an energy crisis in Europe.”

“But a weak U.S. response carries its own risks. It could embolden Putin to take more aggressive steps against Ukraine as fears grow he could try to seize more of its territory. And it could cause more political damage for President Joe Biden at a time his popularity is dropping.”

“When Russia’s lower house of Parliament, or Duma, assembled last month for the first time following elections in September, one of its newest members was a name more familiar in the United States than in her home country,” the New York Times reports.

“Maria V. Butina made headlines across America when she was convicted three years ago of operating as an unregistered foreign agent trying to infiltrate influential conservative political circles before and after the 2016 election.”

“She is now focused on playing a prominent role in Russia’s political system — through legal means this time, and with the support of President Vladimir V. Putin’s United Russia party.”

Former President Donald Trump congratulated Kyle Rittenhouse on his acquittal after a jury found the 18-year-old not guilty of all charges at his homicide trial in Kenosha, Wisconsin, Insider reports.

Said Trump in statement: “Congratulations to Kyle Rittenhouse for being found INNOCENT of all charges. It’s called being found NOT GUILTY – And by the way, if that’s not self defense, nothing is!”

Sen. Kyrsten Sinema (D-AZ) “said this week she remains firmly opposed to changing federal election laws on a partisan basis, signaling that a planned last-ditch voting rights push that party leaders and activists are planning for the closely divided Senate in the coming months is likely to fail,” the Washington Post reports.

“I’m always surprised when people say, ‘Oh, she’s an enigma.’ I’m, like, not at all, actually. I’m very straightforward about what I believe in and why I’m doing what I do.”  — Sen. Kyrsten Sinema (D-AZ), in an interview with the Washington Post.

“The Biden administration’s immigration policy has been muddled by high-profile reversals and splits within the senior ranks, leaving the government struggling to counter a record number of migrants at the border and reliant on some Trump administration policies that President Biden pledged during his campaign to unwind,” the Wall Street Journal reports.

“Underlying much of the lack of cohesion is a rift at the highest levels of the administration over the broad direction immigration policy should take.”

“The Supreme Court could rule as soon as Monday on Texas’ ban on abortion after roughly six weeks,” the AP reports.

“The number of U.S. Covid-19 deaths recorded in 2021 has surpassed the toll in 2020, according to federal data and Johns Hopkins University, demonstrating the virus’s persistent menace,” the Wall Street Journal reports.

Sen. Josh Hawley (R-MO) “has dropped his blockade of Julianne Smith, President Joe Biden’s pick to represent the U.S. at NATO,” Politico reports.  “It comes after he sought assurances that she would press European allies to boost their goal of spending two percent of their gross domestic product on their defense by 2024.”

“President Joe Biden is betting that his unprecedented coronavirus vaccine mandate will prevail against a flurry of lawsuits aiming to strike it down. The legal battle is expected to reach the Supreme Court,” CNBC reports.

“Biden believes the mandate, which would make businesses with 100 or more employees require their staff to get vaccinated or face regular testing by Jan. 4, will cover about two-thirds of all U.S. workers and hasten the end of the coronavirus pandemic. The White House says legal precedent gives it the authority to act to respond to the ‘grave danger’ posed by the pandemic.”

Former Trump chief of staff Mark Meadows told Steve Bannon that he would like to see Donald Trump become Speaker of the House.  Said Meadows: “You talk about melting down… people would go crazy!”

Playbook: “Comments like Meadows’ are starting to reveal a growing frustration with McCarthy in Trump’s orbit.”

The lawyer for Jacob Chansley, who is known as the “QAnon Shaman,” said he had a message to former President Donald Trump: “You’ve got a few fucking things to do. Including clearing this fucking mess up and taking care of a lot of the jackasses that you fucked up because of January 6.”

New York Times: “Ghost guns — untraceable firearms without serial numbers, assembled from components bought online — are increasingly becoming the lethal weapon of easy access for those legally barred from buying or owning guns around the country.”

“The criminal underground has long relied on stolen weapons with sanded-off serial numbers, but ghost guns represent a digital-age upgrade, and they are especially prevalent in coastal blue states with strict firearm laws.”

Former Alabama House Speaker Mike Hubbard (R) “tried and failed to orchestrate his release by seeking to have language added to a prison bill when the Legislature recently met in special session,” AL.com reports.  “According to the filing, Hubbard found the support he needed among old state House colleagues, but he could not get the support in the state Senate to change the law to let him out early.”

“Night after night, hundreds of people marched the streets of Oregon’s largest city, demanding racial justice following the murder of George Floyd by a white officer,” the AP reports.

“Among the rallying cries were ‘defund the police’ — a call for elected officials to reallocate some law enforcement funding elsewhere. In June 2020, Portland City Council and the mayor answered by cutting millions from the police budget.”

“Now, a year and a half later, officials are poised to partially restore those cuts. Portland City Council is considering around $5.2 million in police investments — adding to the approximately $230 million budget — amid a record number of homicides.”

Rep. Adam Schiff (D-CA) spoke to Charlie Sykes on the Bulwark podcast on his new book, Midnight in Washington:

“I wanted to write the book because there had been a lot written about the Trump White House by people who had left that White House, but not very much written about what was going on in Congress: Why so many people in the Republican Party ended up betraying their ideology, their values, their belief system, their morality, in the service of this unethical man, and I wanted to write about how that happens.”

“And you know, what I learned all too painfully was, it happens one day at a time, one small concession at a time in the beginning, one small lie, followed by a demand for a bigger lie and a bigger concession, a bigger moral lapse, followed by another until you know, these folks that I admired and respected, because I believe that they believe what they were saying, had given themselves up so completely to Donald Trump and his immorality.”