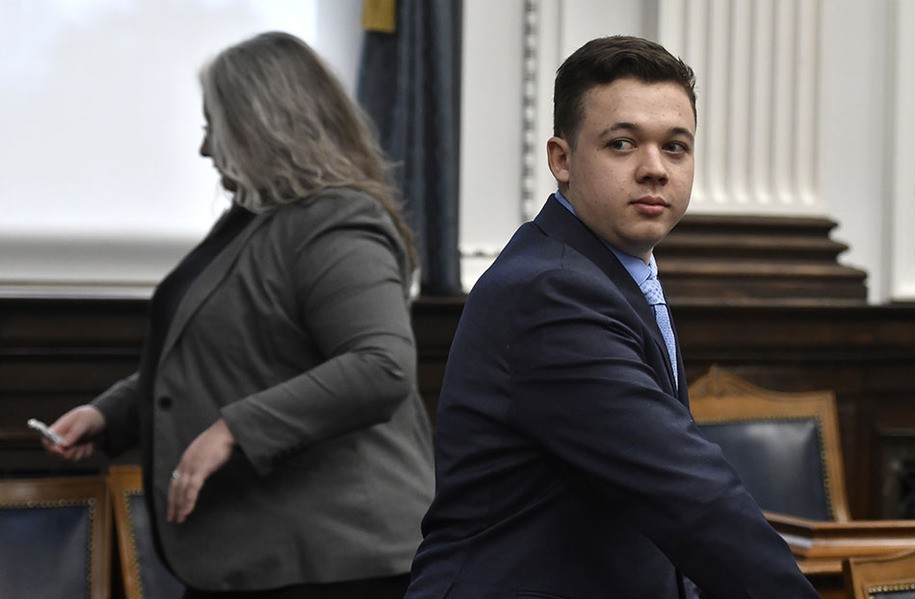 “After nearly four full days of deliberation in a case that riveted the nation, a jury delivered its dramatic verdict Friday, acquitting Kyle Rittenhouse of killing two men, wounding another and endangering two more in a series of shootings during a night of protests in Kenosha last year,” the Milwaukee Journal Sentinel reports.

“In reaching not guilty verdicts, the jury agreed Rittenhouse, 18, acted in self-defense, a claim his supporters and lawyers made within a day of the events that made him a conservative cause célèbre.”

Lets be really honest here, the only real justice in the Rittenhouse case would have been for the police to treat him like they would have treated a black man who was an active shooter with an AR 15 and who had already killed two people. Because once Rittenhouse was allowed to live that night, we all knew he was going to get off because of self defense. So liberals, next time you go to a protest, go armed. And if you see a conservative with a gun at the protest, shoot them first so you can claim self defense and go free. That’s the precedent set here today.

In another impressive accomplishment by Speaker Nancy Pelosi, the House of Representatives passed the $1.75 trillion Build Back Better Act, 220 to 213. Pelosi offered praise for President Biden, saying that without his leadership, “none of this could’ve been possible.”

The bill will now head for consideration in the Senate.

Jonathan Bernstein: “Could the whole thing still fall apart? Sure. The House shouldn’t be a problem; after having voted yes on Friday (and in preliminary votes even earlier) there’s little incentive to kill the bill when it returns. But all it takes is a single Democratic senator to bring everything down. Still, it does seem unlikely that events would have reached this stage without some confidence that Manchin and Sinema would be on board, and one would imagine that those senators would have given more of an indication long before now if they intended to oppose final passage. Which gets back to the point about shared incentives: Even as both Manchin and Sinema have strong electoral incentives to establish themselves as clearly more moderate than the party, they also have incentives for the party to thrive overall.”

“So it sure looks likely that some version of Build Back Better, modified by the Senate, will wind up passing. And if that happens, this will have been (for better or worse) one of the most productive Congresses in a long time. With one year remaining to do more.”

The CBO estimate of the Build Back Better Act finds “that enacting this legislation would result in a net increase in the deficit totaling $367 billion over the 2022-2031 period, not counting any additional revenue that may be generated by additional funding for tax enforcement.”

The White House had previously estimated that enhanced IRS enforcement would generate $400 billion over the same time period.

Punchbowl News: “We dug into this a bit in the morning, but we expect lots of changes to the House bill. The SALT provision — hard fought by Rep. Josh Gottheimer (D-NJ) and other Northeastern moderates — could become less generous in the Senate and tied directly to income levels. Immigration provisions may not survive the Byrd Rule. The expansion of Medicare to cover hearing programs may be gone or curbed significantly. Manchin has raised objections to the family and medical leave provision approved by the House. The tax changes in this current House bill — a new surtax on high earners, for instance — could be dramatically revised.”

“There will be a furious lobbying blitz by those companies, industries and trade groups that didn’t get what they want in the House bill to fix that in the Senate.”

David Brooks: “Presidents are judged by history, not the distraction and exhaustion of the moment. Did the person in the Oval Office address the core problem of the moment? The Biden administration passes that test. Sure, there have been failures — the shameful Afghanistan withdrawal, failing to renounce the excesses of the cultural left. But this administration will be judged by whether it reduced inequality, spread opportunity, created the material basis for greater national unity.”

President Biden went to Walter Reed National Military Medical Center on Friday for his first routine physical exam as president, the AP reports. During the physical, Biden underwent a routine colonoscopy. The process, which requires anesthesia, meant that presidential power was temporarily transferred to Vice President Kamala Harris during the procedure and recovery. Thus, for two hours this morning, the United States had its first woman President.

“The FDA has just authorized Pfizer and Moderna’s COVID-19 boosters for all adults — a move that will make boosters available to everyone ages 18 and up,” NBC News reports.

Connecticut Gov. Ned Lamont (D) said that all state residents should get a booster shot and not wait for guidance from federal government, the Hartford Courant reports.  Said Lamont: “The CDC’s confusing guidance is going to be made clear within 24 hours that says ‘go get yourself a booster shot if you’re over 18 and it’s been at least six months since your last vaccination.’”

Associated Press: “House Democrats are working to revamp their message, move on from the infighting and emphasize the bill’s marquee programs. Among them: Billions of dollars to pay for child care, reduce pollution, expand health care access and curb prescription drug costs for older Americans.”

“They are also trying to get the word out about the separate, $1 trillion infrastructure bill that Biden signed into law this week. House Democrats said they planned to hold 1,000 public events in the coming weeks — five for every member of their caucus — to tout the upgrades that will be coming to roads, bridges, public transit, internet and more.”

Washington Post: “McCarthy used the address to attack Democrats over a broad range of issues, including border security and Afghanistan policy — prompting jeers from Democrats, some of whom left as he spoke.”

Sen. John Kennedy (R-LA) questioned Saule Omarova, President Biden’s pick to be top bank regulator who grew up in the Soviet Union, during a tense exchange:

KENNEDY: You have the right to believe every one of these things. You do. This is America. I don’t mean any disrespect, but I don’t know whether to call you professor or comrade.

OMAROVA: I’m not a communist. I do not subscribe to that ideology. I could not choose where I was born… My family suffered under the communist regime. I grew up not knowing half of my family.

“The Justice Department said on Thursday it’s giving $139 million to police departments across the U.S. as part of a grant program that would bring on more than 1,000 new officers,” the AP reports.

1,066 police officers will get hired with the new funding, according to the DOJ.

183 law enforcement agencies will get the money.

Tennessee Gov. Bill Lee (R) invited police officers in New York and Los Angeles who refuse to get vaccinated to join his state’s highway patrol. Said Lee: “In Tennessee, you will be given our full support and respect, and I work to make sure your freedoms are protected.”

“Chuck Schumer and Mitch McConnell clobbered each other incessantly during October’s debt ceiling standoff. Now, as a new December deadline approaches, they’re taking a slightly more conciliatory approach,” Politico reports.  Said Schumer: “We had a good discussion about several different issues that are all extent here as we move toward the end of the session, and we agreed to keep talking and working together.”

Sen. Rick Scott (R-FL) told his colleagues this week top party donors were “furious” with the number of Republicans — including Senate Minority Leader Mitch McConnell — who voted for the bipartisan infrastructure bill, Axios reports.  The donors complained to Scott it was foolish for any member of their party to help deliver a win to President Biden.

“DeSantis never made an appearance during the special legislative session in Tallahassee but used his huge political sway over the Republican-dominated Legislature to get his bills passed.”

“In a matter of months, Florida Gov. Ron DeSantis has gone from being a shining example in Donald Trump’s eyes of a MAGA leader molded in his image to an average politician who forgot his roots as he rose to Republican stardom,” CNN reports.

“People close to both men first noticed the palpable shift in Trump’s posture toward DeSantis earlier this year as enthusiasm for the Florida governor swelled among donors and GOP operatives who praised his laissez-faire response to the Covid-19 pandemic. The more DeSantis’ popularity soared, the more obsessed Trump became with receiving credit for his political celebrity.”

First Read: “We’ll state it plainly: Just 10 months removed from Jan. 6, there is no collective political decency on Capitol Hill. Especially when one political party can’t or won’t police violent images by its own members.”

“Just look at McCarthy’s own evolution: He’s gone from condemning misbehavior by his own members (Steve King) and speaking out about Donald Trump’s actions on Jan. 6 (saying the former president “bears responsibility” for the attack), to ignoring certain actions (Marjorie Taylor Greene) and now rationalizing them (Gosar).”

“And the next logical step becomes actively condoning the misbehavior.”

David Brooks: “Over the past few decades there have been various efforts to replace the Reagan Paradigm: the national-greatness conservatism of John McCain; the compassionate conservatism of George W. Bush; the Reformicon conservatism of the D.C. think tanks in the 21st century.”

“But the Trumpian onslaught succeeded where these movements have so far fizzled because Trump understood better than they did the coalescence of the new American cultural/corporate elite and the potency of populist anger against it. Thus the display of Ivy League populism I witnessed in Orlando might well represent the alarming future of the American right: the fusing of the culture war and the class war into one epic Marxist Götterdämmerung.”

“A struggle over timing broke out Thursday in the new criminal contempt of Congress case against Donald Trump ally Steve Bannon as prosecutors pressed for a quick trial and Bannon’s lawyers seemed to be in no hurry for their client to have his day in court,” Politico reports.

“U.S. District Court Judge Carl Nichols rejected an attempt by Bannon’s defense to delay further action in the case until after the New Year, but said he’s not convinced yet that the Justice Department’s timetable is realistic either.”

New Hampshire Gov. Chris Sununu (R) slammed the right-wing “Moms for Liberty” nonprofit yesterday for offering a $500 cash reward to anyone who snitches on a public school teacher they believe broke the state’s new law that allows teaching licenses to be revoked if the instructor teaches what conservatives call “critical race theory.”

Offering a financial incentive to hunt down teachers is “wholly inappropriate,” Sununu said in a statement, despite being the one who signed the law and making all this possible in the first place.

The law, which bans teachers from teaching anything with a “divisive concept” and the idea that “an individual, by virtue of his or her race or sex, is inherently racist, sexist, or oppressive,” led the state government to put up a website where parents can report teachers.

Michelle Cottle: “How upbeat is the Republican Party about its prospects for taking control of the House and Senate next year? So upbeat that it apparently is cool with the fact that in three Senate races — Georgia, Missouri and Pennsylvania — it has leading candidates who have been accused of harassing, abusing, threatening or otherwise mistreating women.”

“Once upon a time, this situation likely would have provoked a major display of concern, or at least an attempt at damage control, by the Republican establishment. Instead many party officials are brushing off related questions like pesky bits of dryer fluff.”