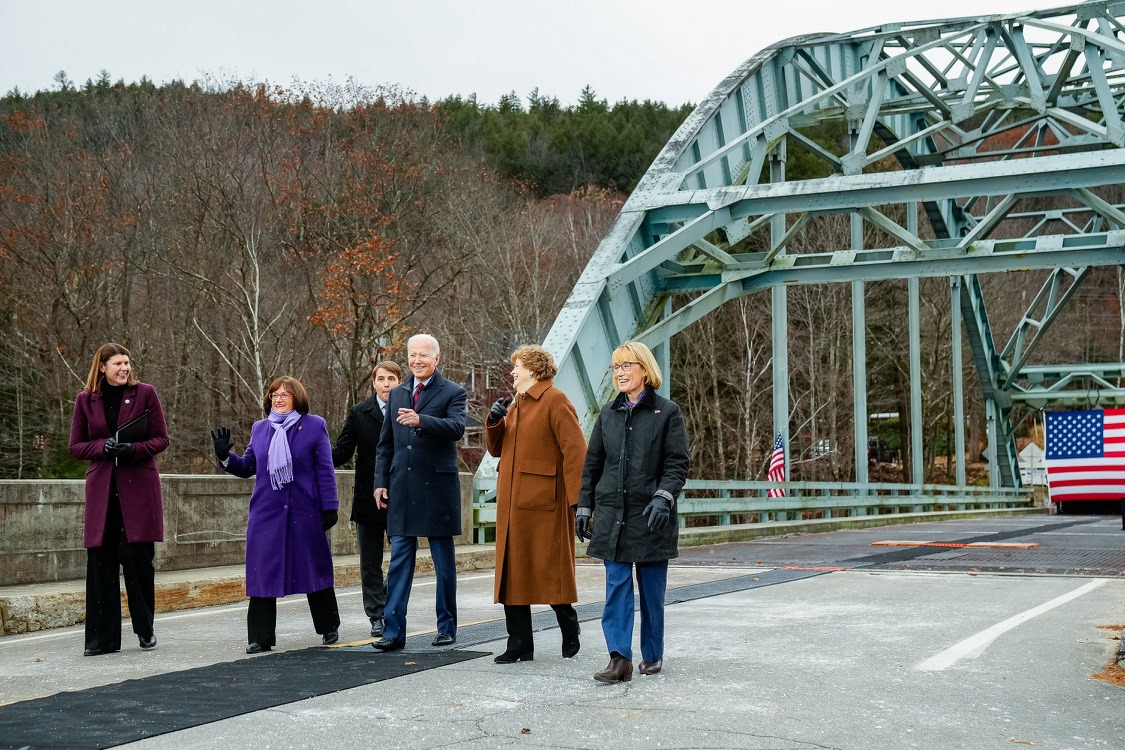 “Democrats are struggling with a huge problem that could sink them at the ballot box: They may end up looking more sympathetic to rich people than Republicans,” Politico reports.

“After spending several election cycles campaigning against the GOP’s tax cuts as a boon for the wealthy, House Democrats are on the verge of passing a massive tax break for high-income earners — raising a cap on local and state tax deductions that primarily affects high-cost states. Though it’s good politics for many coastal-area members to include that tax relief in President Joe Biden’s social spending and climate bill, it’s a move that Democrats say threatens to become a national liability ahead of next year’s midterms.”

Rep. Jared Golden (D-ME): “If you’d told me a year ago that the second-biggest piece of a signature bill of this Congress was $280 billion in tax giveaways to millionaires, I’d have told you the Republicans were in charge.”

“Democrats are privately reaching out to Republicans to cinch a separate, bipartisan deal for paid family leave after Sen. Joe Manchin (D-WV) crushed hopes of including it in President Biden’s $1.75 trillion social spending plan,” Axios reports.

“Conservative media mogul Rupert Murdoch is publicly rebuking former President Donald Trump — telling him to get over the past and focus on the future,” the Washington Post reports.

Said Murdoch: “The current American political debate is profound, whether about education or welfare or economic opportunity. It is crucial that conservatives play an active, forceful role in that debate, but that will not happen if President Trump stays focused on the past.”

He added: “The past is the past, and the country is now in a contest to define the future.”

Nick Martin: “Before his censure, Congressman Paul Gosar made a big deal about having deleted the anime video depicting him killing AOC. Others in the Republican Party cited the deletion as a sign of good faith. Now, after the censure, Gosar has reposted the same video.”

And then: “And it’s gone. Congressman Paul Gosar took the anime video down again, this time after leaving it up for two hours.”

“Our work here matters, our example matters. There is meaning in our service. And as leaders in this country, when we incite violence with depictions against our colleagues, that trickles down into violence in this country. And that is where we must draw the line.”  — Rep. Alexandria Ocasio-Cortez (D-NY), speaking before the vote to censure Rep. Paul Gosar (R-AZ).

Vice President Kamala Harris defended her job performance in an ABC News interview, insisting she and President Joe Biden have been able to deliver for the American people.

Harris’ defense comes in the wake of a CNN report that alleges the West Wing has grown frustrated with Harris and her staff, describing dysfunction within her office and frustration with her lack of visibility.

“Days after President Joe Biden told world leaders that his administration is committed to slowing climate change with ‘action, and not words,’ his Interior Department oversaw one of the largest oil and gas lease sales in American history,” WBUR reports.

“Eighty million acres of the Gulf of Mexico — an area twice the size of Florida — was put on the auction block on Wednesday.”

“Republican senators are expressing shock and disbelief that conservative allies of former President Trump in the House threatened to strip colleagues who voted for the $1 trillion infrastructure bill of their committee assignments,” The Hill reports.

But, at the same time, “Every single Senate Republican has signed onto Sen. Mike Braun’s (R-IN) formal challenge of President Biden’s Covid vaccine mandate for businesses with more than 100 employees,” Punchbowl News reports. “This is the clearest sign yet that the anti-vaccine mandate stance has become a mainstream GOP position.”

Politico: “Ahead of a vote on Democrats’ biggest agenda item, the GOP conference is embroiled in messy internal spats that have spilled into public view, including the censure Wednesday of a far-right House member, the first such vote in more than a decade. At the same time, some rank-and-file Republicans are still pushing to punish their own colleagues for backing a bipartisan bill reviled by former President Donald Trump.”

“That turmoil is no longer an anomaly for the GOP. The party’s emboldened conservative agitators have repeatedly stoked controversies that threaten to become all-consuming distractions, leaving House Minority Leader Kevin McCarthy to seek out a fire extinguisher. The recurring problem could hurt the party as it works to claw back the majority next year.”

Said Meadows on Rep. Matt Gaetz’s (R-FL) podcast: “You need to make Democrats take tough votes. You need to make sure that when you’ve got them on the ropes that you don’t throw in the white towel and surrender. And that’s what’s happened. We saw it with the infrastructure vote a few weeks ago… If you’re going to be the speaker of the House, you’ve got to be able to control those members and those members with particular positions of authority.”

“Meadows is also calling for the 13 Republicans to face consequences, including stripping them of any ranking member roles on committees — which members of the ultra-conservative House Freedom Caucus have also pushed.”

“Trump broke Ted Cruz. A real man would be defending his wife, and his father and the Constitution.”  — Rep. Liz Cheney (R-WY), on CNN.

“It is such a gross grab of power to think you can tell other people what you have to do with your own body.” — Rep. Glenn Grothman (R-WI), speaking on the House floor about mask mandates, apparently forgetting he wants to ban women from having abortions.

Edward Luce: “The skill at which Donald Trump excels is creating a master narrative and ensuring every American hears it — no consultants needed. That is what he did in 2016 and will try to repeat if he runs for president again. The first time was about draining the Washington swamp. Now it is about Democrats stealing elections. Had Trump put his 2016 horse through an advisory committee, it would have come out as a camel. But he stuck to his own counsel.”

“The key to Trump’s unlikely success, which Democrats seem predisposed to miss, is to speak plainly to as wide a group of Americans as possible at the same time, even when the product is nihilism. It is the opposite of the microtargeting that Democratic consultants so love. This is an irony, since Democrats claim to represent ‘the people.’ Fighting for ordinary Americans is a far harder sell when your marketing is tailored to so many different ones.”

Noah Smith: “So here we have a situation where most Americans love their country and have no one to represent that love in the political arena. They’re forced to choose between one movement that vilifies the idea of America, and another that vilifies the America that actually exists. The patriotic silent majority is politically and ideologically homeless right now.”

“Whichever movement can reverse course and tack back toward patriotism first will, I predict, encounter a deep and eager reservoir of positive energy and support. Obviously, being on the progressive side of things myself, I hope Dems come up with the next JFK before Republicans come up with the next Reagan. But someone needs to try patriotism soon, because to not do so would be madness.”

Lawyers for indicted Rep. Jeff Fortenberry (R-NE) acknowledged that “the government made at least two recordings of the sitting congressman over the course of its investigation surrounding illicit campaign contributions from a Nigerian-Lebanese billionaire,” the Daily Beast reports.

“The prosecution said in a filing that the recordings in question—a 2018 conversation with a government informant, and a 2019 interview with an agent in Fortenberry’s Nebraska home—are only two among more than 50 audio and video recordings they have turned over to the defense team. And those dozens of recordings are supplemented by more than 11,600 pages of ‘written communications, reports, transcripts, articles, and other records,’ the federal attorneys said.”

“Two of the men found guilty of the assassination of Malcolm X are expected to have their convictions thrown out on Thursday, rewriting the official history of one of the most notorious murders of the civil rights era,” the New York Times reports.

“As president, Donald Trump stymied lawmakers seeking his financial records and the testimony of a close adviser by employing a legal strategy that worked to his advantage even when he lost in court,” the Washington Post reports.

“Trump has turned to these familiar tactics now in a bid to thwart House investigators pursuing accountability for the Jan. 6 insurrection at the U.S. Capitol, but legal observers say that in this latest test of executive power, such an approach may fail to achieve his desired outcome.”

“President Joe Biden on Wednesday announced two new selections to serve as circuit judges as the push to name — and confirm — a raft of judicial nominees stays a central focus of the White House and Senate Democrats,” CNN reports.

Sen. Josh Hawley (R-MO) has voted for only four out of President Biden’s 118 nominees that have received a vote on the floor of the U.S. Senate, the fewest of any senator, the Kansas City Star reports.

“The hastily constructed migrant encampments at the main border crossing into Poland from Belarus were cleared by the Belarusian government on Thursday morning, removing, for the moment, a major flashpoint that has raised tensions across Europe,” the New York Times reports.

Washington Post: Belarus’s Lukashenko tried to use migrants as a weapon. That’s now turned against him.