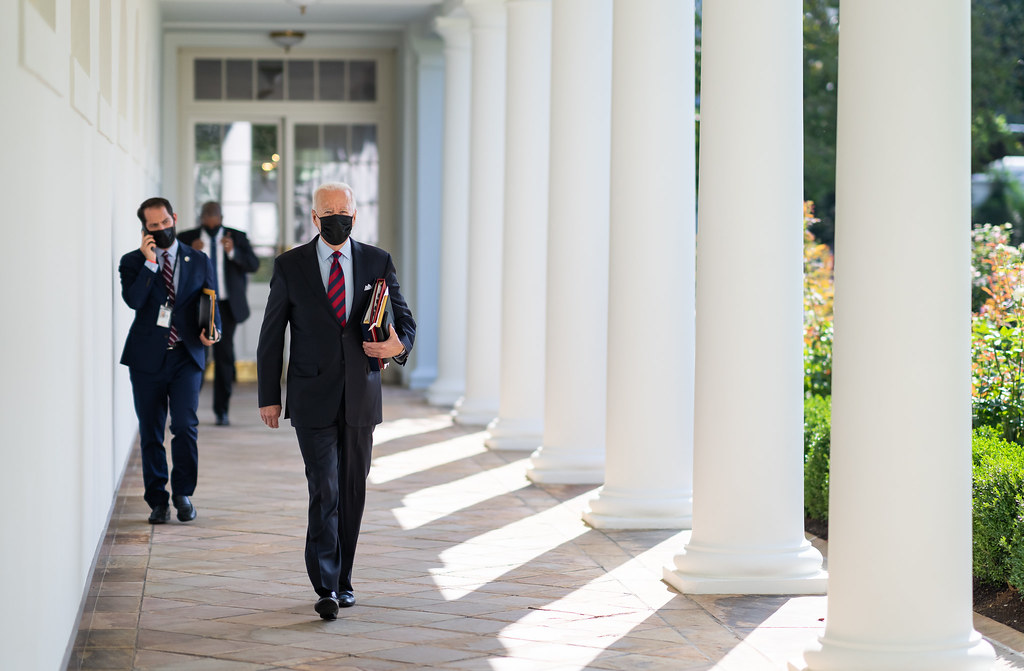 “President Biden asked the Federal Trade Commission on Wednesday to consider whether ‘illegal conduct’ by large oil and gas companies is pushing up gasoline prices for American consumers, the latest effort by the administration to target concentration in the energy industry in a bid to bring down prices at the pump,” the New York Times reports.

Economists and analysts in leading ratings agencies say that President Biden’s infrastructure and social spending legislation will not add to inflationary pressures in the U.S. economy, Reuters reports.

“Democrats are refocusing their message on President Joe Biden’s Build Back Better bill in response to inflation concerns from voters and key centrist lawmakers as Congress moves closer to final votes on the massive spending package,” NBC News reports.

“The White House and Democratic leaders have rebranded the legislation as an antidote to widespread price hikes, arguing that it would lower the cost of prescription drugs, child care and overall expenses related to raising families.”

Sen. Joe Manchin (D-WV) signaled he’s fine with moving ahead on the budget reconciliation package this year, Politico reports.  Said Manchin: “I’m not in charge of the timing. Whatever they want to do is fine with me… If we’re gonna vote, vote.”

“President Biden on Tuesday began selling his $1 trillion infrastructure law, making the case that the money would do more than rebuild roads, bridges and railways. The law, he said, would help the United States regain its competitive edge against China,” the New York Times reports.

Said Biden: “We’re about to turn things around in a big way. For example, because of this law, next year will be the first year in 20 years that American infrastructure investment will grow faster than China’s.”

“The government sharply underestimated job gains for most of 2021, including four months this summer in which it missed more job growth than at any other time on record,” the Washington Post reports.

“In the most recent four months with revisions, June through September, the Bureau of Labor Statistics (BLS) reported it underestimated job growth by a cumulative 626,000 jobs — that’s the largest underestimate of any other comparable period, going back to 1979. If those revisions were themselves a jobs report, they’d be an absolute blockbuster.”

“Americans might say they’re upset about rising prices and losing confidence in the economy, but that hasn’t stopped them from snapping up cars, electronics, sporting equipment and other big-ticket items,” the Washington Post reports.

“Retail sales jumped 1.7 percent in October, marking a significant acceleration in spending from September… And despite new data showing that consumer confidence is at a 10-year low, they seem to be shrugging off the higher prices on gas, groceries and other everyday goods.”

Said Trump: “This is the Broken Old Crow’s fault. He could have won it all using the Debt Ceiling-they were ready to fold. Now the Democrats have a big victory and the wind at their back. McConnell is a fool and he damn well better stop their ‘Dream of Communism Bill’ and keep his Senators in line, or he should resign now, something he should have done a long time ago.”

Former President Donald Trump did a truly crazy interview with MyPillow CEO Mike Lindell in which he rolled out a new — and false — explanation for why he lost the 2020 presidential election.  Said Trump: “We know what happened… they basically used COVID-19 or the China virus to rig the election, and it’s a shame.”  It’s not at all clear why Trump is wearing a tuxedo for the interview.

More news from Jon Karl’s new book, via Yahoo News:  “Ivanka Trump and her husband, Jared Kushner, hosted a fancy dinner party for members of the Trump administration and invited guests just hours after a deadly siege at the US Capitol resulted in the death of a police officer, while more would die in the coming weeks.”

Rep. Paul Gosar (R-AZ) was censured by the House of Representatives and removed from his committee assignments in response to his sharing an anime video depicting him killing Rep. Alexandria Ocasio-Cortez (D-AZ) and attacking President Biden, 223 to 210.

Gosar was forced to stand in the well of the House while the resolution was read out loud.

Punchbowl News: “Republicans complained that there should’ve been an ethics investigation into the incident before any punishment was meted out to Gosar. Democrats countered that McCarthy would have to go along with such a probe, yet he hasn’t shown any interest in doing that.”

“One thing is very clear — Republicans will retaliate against Democrats if they win the majority in 2023. GOP lawmakers mention Democratic Reps. Ilhan Omar (D-MN) and Maxine Waters (D-CA) among those who would be in danger of being removed from their panels by a GOP majority. More such removals may follow.”

“His agency’s newly filled coffers will give Buttigieg the chance to blitz the airwaves and crisscross the country handing out money for bridges and roads, further adding to his already robust media presence. But such huge dollar signs also mean Buttigieg will face aggressive oversight for how the Department of Transportation spends the funds, and any hint of waste or abuse — even outside his direct control — could endanger his prospects in a potential presidential run.”

“The Biden administration is planning to invest billions of dollars to expand U.S. manufacturing capabilities of coronavirus vaccines to increase the supply of doses for poorer nations,” the Washington Post reports.

“The White House is aiming to spur the production of at least 1 billion doses a year. The funds will support companies that make mRNA vaccines, such as Pfizer and Moderna, by helping them expand their capacity by funding facilities, equipment, staff and training.”

Rep. Scott Perry (R-PA), who was just elected chair of the House Freedom Caucus, tested positive for Covid-19, the Harrisburg Patriot-News reports.  Perry’s office would not say if he was vaccinated, calling it a “personal health matter.”

“That’s just 29 days from today. And remember, it’s really less than that because financial markets will start to panic if Congress and the White House don’t look like they’re on a path to resolving the situation before that point.”

“Also, government funding runs out on Dec. 3. And Senate Democrats are likely to be struggling to pass the Build Back Better Act through much of December. That effort, however, may be derailed by twin government funding and debt limit fights.”

“Taliban forces held a military parade in Kabul on Sunday using captured American-made armoured vehicles and Russian helicopters in a display that showed their ongoing transformation from an insurgent force to a regular standing army,” Reuters reports.

“The number of airline passengers traveling for Thanksgiving this year is expected to rebound to pre-coronavirus pandemic levels,” the AP reports.

Rep. Marjorie Taylor Greene (R-GA) told The Hill that she has accumulated $63,000 in fines for refusing to wear a mask on the House floor, with additional fines likely to be imposed as she continues to defy the chamber’s mask requirement during the Covid-19 pandemic.

“During the COVID-19 pandemic, Tennessee Gov. Bill Lee empowered county mayors to create mask mandates, specifically encouraged some mayors to do so and once said mandates could have prevented an economic shutdown if they had been enacted sooner,” the Tennessean reports.

“QAnon shaman” Jacob Chansley, one of the most notorious figures of the Jan. 6 Capitol riot, was sentenced Wednesday to three years and five months in prison for his role in the invasion of the halls of Congress by a horde of Trump supporters. CNBC reports.

“A national leader of the Proud Boys, a far-right group with a history of violence, asked a judge on Monday to release him from the D.C. jail and place him on home confinement, citing what he described as inhumane conditions in the facility,” the Washington Post reports.