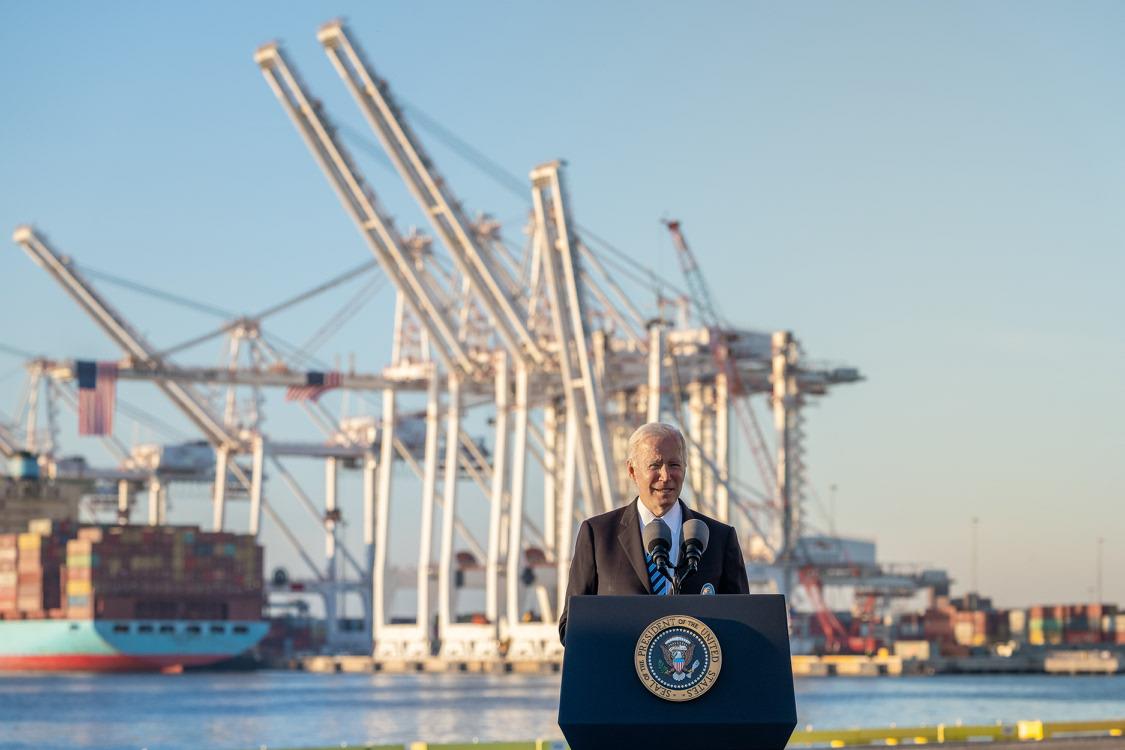 Speaker Nancy Pelosi told her colleagues that House isn’t leaving for Thanksgiving recess until the Build Back Better Act is passed, CNN reports.

Politico: “The White House cautioned that CBO’s analysis won’t necessarily show the bill is fully paid for, in part because of the way CBO tallies the savings from a huge IRS policy provision. The White House said that provision would bring in as much as $400 billion, but CBO’s estimate may be closer to $200 billion.”

“While the White House says the new surtax could generate $230 billion to pay for the spending bill, experts and bankers say that many individuals will find ways to avoid it and that it will raise less than an earlier proposal for a billionaires tax.”

Playbook: “Tough luck if you’re a House staffer or reporter. The lower chamber looks like it could be headed for yet another late-night Friday — or weekend session — as Pelosi lays down the latest edict on Build Back Better: No Thanksgiving break until the House passes the bill.”

Sen. Jon Tester (D-MT) told Politico he expects to be at work until the last day of the year. Said Tester: “New Year’s Eve. Do you have plans for Christmas? You can spend it at my house, because my plans are screwed up too. I think it’s going to be very late into December by the time we get everything done.”

Goldman Sachs forecasts the economic recovery will drive the unemployment rate back to 3.5% by the end of next year, CNN reports.

Goldman Sachs says the current inflation surge “will get worse this winter before it gets better,” Axios reports.

“Gas prices in California reached an all-time high Monday as the average price of a regular gallon soared to $4.682,” the Los Angeles Times reports.

Jeff Greenfield: “Left unspoken was a chilling reminder from history: Inflation has a unique power to kneecap a presidency. Incumbent presidents and their parties do not do well at all when inflation (and attempts to cure it) are on voters’ minds come election time. The gas pump, the supermarket check-out counter, the heating bill, the sticker on the windshield, provide — or seem to provide — powerful indictments against the party in charge.”

“If that’s not enough to unsettle the White House and its allies, consider this: Presidents have almost no power to ease the pain of inflation, and the voting public cuts presidents no slack at all because of that impotence. Look into the toolbox of our country’s chief executive and you’ll find it empty of effective tools, filled instead with devices now obsolete or laughable or meaningless or politically destructive.”

Politico: “Tight congressional races across the nation are quickly turning into battlegrounds over a key economic question: whether President Joe Biden’s spending agenda is the chief culprit for inflation concerns gripping the country.”

“President Biden and China’s leader, Xi Jinping, pledged at a virtual summit to improve cooperation, but offered no concrete action after three and a half hours of talks,” the New York Times reports.

“In separate statements after the talks ended, each side emphasized the points of contention that mattered most: lists of mutual grievances that underscored the depth of the divisions between them.”

“China’s leader, Xi Jinping, urged the United States not to test his country’s resolve on the question of Taiwan, an island democracy Beijing claims is part of its territory,” the New York Times reports. Said Xi: “It is playing with fire, and if you play with fire, you will get burned.”

Josh Rogin: “The White House is expected to announce that neither President Biden nor any other U.S. government officials will attend the Beijing Games. This diplomatic boycott is intended, the sources say, as a way to respond to the Chinese government’s human rights abuses without impacting U.S. athletes.”

The House will vote tomorrow on a resolution that censures Rep. Paul Gosar (R-AZ) for a video showing him killing Rep. Alexandria Ocasio-Cortez (D-NY), Politico reports. The resolution would also remove him from the House Oversight Committee, on which he serves with Ocasio-Cortez. Gosar would be able to remain on the House Natural Resources Committee.

Speaker Nancy Pelosi to CNN: “We cannot have members joking about murdering each other, as well as threatening the President of the United States.”

“House Minority Leader Kevin McCarthy (R-CA) says he called Rep. Paul Gosar (R-AZ) after learning about an anime video the Arizona Republican posted last week that depicted violence against two prominent Democrats,” Politico reports.  Said McCarthy: “He took the video down and made a statement that he doesn’t support violence to anybody. I called him when I heard about the video. And he made a statement.”

She also threatened to not back McCarthy for Speaker: “I’m going to be laying things on the table that I want to see changed over time, and then we’ll see what happens and see if anyone else is running.”

Former Trump national security adviser Michael Flynn tried to enlist Pentagon official Ezra Cohen to help overturn the election, telling him “there was going to be an epic showdown over the election results,” ABC News reports.

Cohen told Flynn: “Sir, the election is over. It’s time to move on.”

Flynn fired back: “You’re a quitter! This is not over! Don’t be a quitter!”

After the January 6 insurrection, Treasury Secretary Steve Mnuchin spoke with other Cabinet members about attempting to remove Donald Trump from office through the 25th Amendment, MSNBC reports.

But the idea was “quickly jettisoned” once Mnuchin recognized how difficult the path would be, especially since Education Secretary Betsy DeVos and Transportation Secretary Elaine Chao were resigning.

“Christopher Miller, who became acting secretary of defense following the firing of Mark Esper, sought to dissuade former President Donald Trump from attacking Iran by acting like a ‘fucking madman’ and walking Trump through just how destructive such an attack would be,” Insider reports.

Said Miller: “I would play the fucking Madman. And everybody else would be like, ‘All right, he’s the new guy. He’s fucking insane. Don’t listen to him.’ I was like, ‘Hey, if we are going to do this shit, let’s do it.’”

“As temperatures drop and coronavirus infections spike across Europe, some countries are introducing increasingly targeted restrictions against the unvaccinated who are driving another wave of contagion and putting economic recoveries, public health and an eventual return to prepandemic freedoms at risk,” the New York Times reports.

“The World Health Organization warned recently that Europe was once again the epicenter of the pandemic and that half a million people on the continent could die from Covid in the next few months.”

“A new Covid variant identified in a handful of European countries is raising concerns among some health professionals because there are changes to the coronavirus spike protein that have never been seen before,” the Jerusalem Post reports.

“U.S. Roman Catholic Bishops this week are expected to revisit whether President Joe Biden’s support for abortion rights should disqualify him from receiving communion, an issue that has deepened rifts in the church since the Democrat took office,” Reuters reports.

“The Biden administration is expected to begin the process of expanding the booster authorization to all adults as early as this week,“ Axios reports.  “America’s booster campaign got off to an underwhelming start, potentially leaving millions of vulnerable people at risk as the holidays approach.”

“The Biden administration is expected to announce this week that it is purchasing 10 million courses of Pfizer’s covid pill, a multibillion-dollar investment in a medication that officials hope will help change the trajectory of the pandemic by staving off many hospitalizations and deaths,” the Washington Post reports.

“House Democrats are planning to hold 1,000 events throughout the country between now and the end of the year to tout their latest legislative accomplishments, including the bipartisan infrastructure bill,” The Hill reports.

Rep. Gary Palmer (R-AL) bragged about the “critical funding” that the bipartisan infrastructure bill provided for a highway in his district — about $369 million — even though he voted against the legislation.

In fact, just 10 days ago Palmer tweeted: “The Democrats’ recklessly expensive infrastructure bill finally passed tonight after weeks of disarray among their caucus.”

The Casper Star Tribune‘s report on Wyoming Republicans refusing to recognize Rep. Liz Cheney (R-WY) as a member of their party also notes that Cheney voted with Donald Trump on policy 93% of the time.

“That’s a higher percentage than Rep. Jim Jordan, Rep. Elise Stefanik, Rep. Paul Gosar, Rep. Matt Gaetz and a number of other lawmakers who are seen as staunch Trump allies.”

“After a major influx of migrants overwhelmed the southwestern border throughout much of the spring and summer, unauthorized crossings in October were down for the third straight month,” the New York Times reports.

“Iran has resumed production of equipment for advanced centrifuges at a site the United Nations’ atomic-energy agency has been unable to monitor or gain access to for months, presenting a new challenge for the Biden administration as it prepares for nuclear talks,” the Wall Street Journal reports.