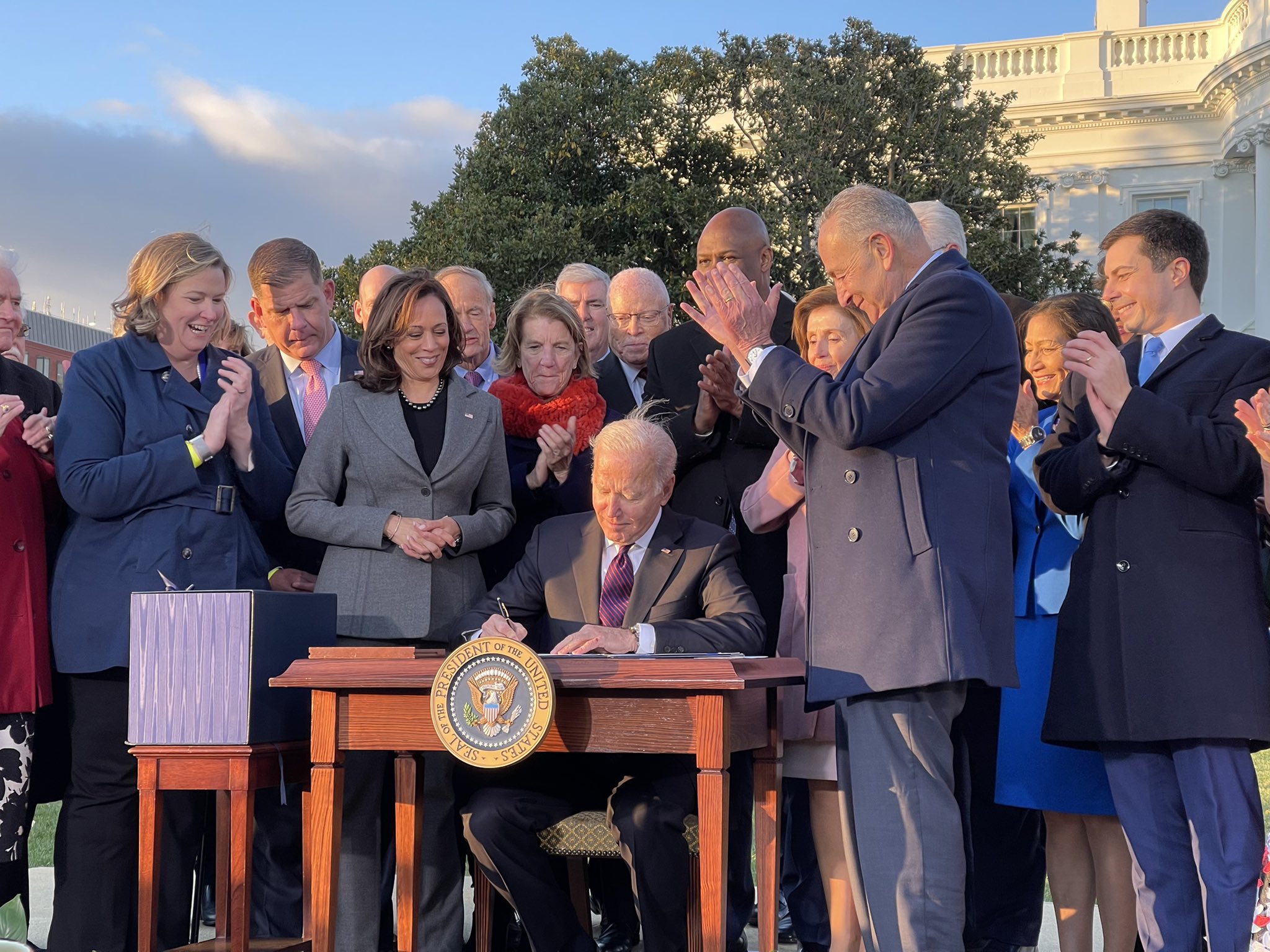 “President Biden on Monday signed into law a sweeping $1.2 trillion infrastructure measure, notching an achievement that had long eluded his predecessor in the White House, Donald Trump,” the Washington Post reports.

“Republicans and Democrats gathered at the White House on Monday as Biden signed the legislation, which is aimed at improving the country’s roads, bridges, pipes, ports and Internet connections.”

“Trump had repeatedly tried and failed to secure a bipartisan infrastructure deal.”

“President Biden named former New Orleans Mayor Mitch Landrieu to supervise the roughly $1 trillion infrastructure bill, turning to a veteran of Hurricane Katrina’s recovery to coordinate the rebuilding of roads, bridges and ports,” the Wall Street Journal reports.  “Mr. Biden chose Mr. Landrieu, a former Louisiana lieutenant governor who led the city of New Orleans from 2010 to 2018, because of his experience running the city and his relationships with state and municipal leaders around the nation.”

New York Times: “As a senior adviser to Mr. Biden with the title of infrastructure coordinator, Mr. Landrieu will supervise funds for upgrading roads, bridges, pipes and broadband internet as the federal government distributes the money to states over the next several years.”

“Democrats are close to making good on long-held promises to lower prescription drug costs and make health care more affordable. The rub? Voters won’t feel much of it until after the 2022 elections,” Politico reports.

“To say that a bill is right for your district… and something that you helped write, but then you’ve got to vote against it because you don’t want to give the other side a victory? That is a sign of what’s broken.”  — Rep. Don Bacon (R-NE), quoted by NBC News on the infrastructure bill.

The CBO announced it will publish a complete cost estimate for the Build Back Better Act by the end of the day on Friday, November 19.  Moderate House Democrats have said they want CBO information before voting on the legislation which raises the prospect of weekend votes.

Trump also insisted that “the fake news” didn’t report on the large size of the crowd on the National Mall: “When I made that speech, it was a magnificently beautiful day. They never gave the credit to the size of the crowd when the crowd went all the way back to the Washington Monument.”

Sen. John Barrasso (R-WY) repeatedly refused on ABC News to condemn President Donald Trump for defending protesters’ calls to “hang Mike Pence” during the Jan. 6 insurrection at the U.S. Capitol.  Barrasso instead praised the former president for bringing “a lot of energy to the party.”

“In a memo not made public until now, then-White House Chief of Staff Mark Meadows emailed to Vice President Mike Pence’s top aide, on New Year’s Eve, a detailed plan for undoing President Joe Biden’s election victory,” ABC News reports.  The memo shows “how Pence was under even more pressure than previously known to overturn the results of the 2020 election.”

“A superior court in Connecticut granted a sweeping victory to the parents of eight people killed in a 2012 mass shooting at Sandy Hook Elementary School in Newtown, Conn., suing the far-right broadcaster and conspiracy theorist Alex Jones and his Infowars media outlet for defamation,” the New York Times reports.  “The judge in Connecticut ruled on Monday that because Mr. Jones refused to turn over documents ordered by the courts, including financial records, he was guilty by default.”

“Juries… will next decide how much Mr. Jones should pay the families in damages, atop court costs.”

Steve Bannon has surrendered, and appeared to be streaming it live as he turned himself in to the FBI field office, CNN reports.  Said Bannon: “We’re taking down the Biden regime every day. I want you guys to stay focused on message, remember signal, not noise.”

“A defiant Steve Bannon vowed Monday to challenge federal contempt charges for refusing to cooperate with a House committee investigating the Jan. 6 attack on the Capitol,” USA Today reports.

Bannon asserted that the Justice Department had taken on the “wrong guy this time.”

He added: “I’m telling you right now, this is going to be the misdemeanor from hell for Merrick Garland, Nancy Pelosi and Joe Biden.”

“Republicans are rallying around former White House adviser Stephen Bannon after his indictment for contempt of Congress on Friday, warning that Democrats’ efforts to force Bannon to comply with what they see as an unfair subpoena paves the way for them to do the same if they take back the House in 2022,” the Washington Post reports.

The Atlantic: “If the 20th century was the story of slow, uneven progress toward the victory of liberal democracy over other ideologies—communism, fascism, virulent nationalism—the 21st century is, so far, a story of the reverse.”

“The son of late Libyan dictator Muammar Gaddafi appeared for nearly the first time in a decade on Sunday to register as a presidential candidate for a December vote planned to help end the years of chaos since his father was toppled,” Reuters reports.

The Economist: “All is disquiet on the Eastern front. On the border between Poland and Belarus, refugees from the Middle East are massing. They have been lured there by Alexander Lukashenko, the Kremlin-backed dictator of Belarus, with false promises of a new life in the West. On the Russian side of the Ukrainian border, it is soldiers that are gathering, in sufficient numbers to raise concern in America. And inside Russia, repression is growing.”

Financial Times: “Western intelligence suggests a ‘high probability of destabilization’ of Ukraine by Russia as soon as this winter after Moscow massed more than 90,000 troops at its border.”

“Worn out by what they see as entrenched dysfunction and lack of focus, key West Wing aides have largely thrown up their hands at Vice President Kamala Harris and her staff — deciding there simply isn’t time to deal with them right now, especially at a moment when President Joe Biden faces quickly multiplying legislative and political concerns,” CNN reports.

“The exasperation runs both ways. Interviews with nearly three dozen former and current Harris aides, administration officials, Democratic operatives, donors and outside advisers — who spoke extensively to CNN — reveal a complex reality inside the White House.”

“Many in the vice president’s circle fume that she’s not being adequately prepared or positioned, and instead is being sidelined. The vice president herself has told several confidants she feels constrained in what she’s able to do politically. And those around her remain wary of even hinting at future political ambitions, with Biden’s team highly attuned to signs of disloyalty, particularly from the vice president.”

“With Thanksgiving just 10 days away, all indications are that Nantucket will be the holiday destination for President Joe Biden,” the Nantucket Current reports.

“Back in early October, we reported that island lodging establishments had begun receiving bookings for Secret Service agents as well as other government security and logistics personnel. The Current has received additional information regarding the preparations for Biden’s visit, one that will be far more complex and logistically challenging than those of his prior Thanksgiving trips to the island as a Senator, Vice President, and Presidential candidate. The scale of the security apparatus necessary to ensure Biden’s safety will be on another level compared to those previous visits, and it’s not yet clear where Biden will be staying, or for how long.”

“America is emerging from the pandemic facing its biggest inflationary spike in decades, as startling and persistent price hikes threaten to undermine the recovery, while posing an entirely new kind of economic challenge to the Biden presidency,” the Washington Post reports.

“Policymakers are facing the devilish and unfamiliar quandary of booming consumer demand and dramatic supply disruptions combining to push higher the cost of necessities such as food, gas and housing.”

Financial Times: Inflation will stay high until Covid is under control.

“Shortly after the Jan. 6 insurrection, Republican Senate leader Mitch McConnell did something extraordinary: He decided to disinvite Donald Trump from President Joe Biden’s upcoming inauguration because he was worried Trump could use the occasion to disrupt the peaceful transfer of power,” ABC News reports.

Former President Donald Trump dismissed a report that Senate Minority Leader Mitch McConnell (R-KY) was going to disinvite him from Joe Biden’s inauguration.  Said Trump: “From Election Day, November 3rd, the day I realized that the 2020 Presidential Election was rigged, I would never have agreed to go to Joe Biden’s Inauguration. This decision was mine, and mine alone. The old broken-down Crow, Mitch McConnell, had nothing to do with it.”

Former White House chief of staff John Kelly “did not mince words about his ex-boss as rioters violently stormed the Capitol on January 6, according to a new book,” Insider reports.  Said Kelly: “If he was a real man, he would go down to the Capitol and tell them to stop.”

Kelly added that he believed the riot was enough to remove a president unable to fulfill their duties: “If I was still there, I would call the cabinet and start talking about the Twenty-Fifth Amendment.”

“Donald Trump’s family hotel company has reached an agreement to sell the rights to its glittering Washington, D.C., hotel for $375 million,” the Wall Street Journal reports.  Sources familiar with the deal said that the buyer intends to drop the Trump name from the building.

“With a government shutdown deadline approaching, Republicans are flirting with forcing a longer-term freeze on funding levels — forgoing the potential for extra defense spending in order to jam Democrats into Trump-era domestic limits,” Politico reports.

“Even as Congress prepares to kick the next spending cliff from Dec. 3 to the holidays, Democrats are clamoring to begin bipartisan negotiations on a sweeping government funding deal. But the GOP’s burgeoning hardline approach to the talks threatens the majority party’s hopes of ushering in their own spending priorities.”