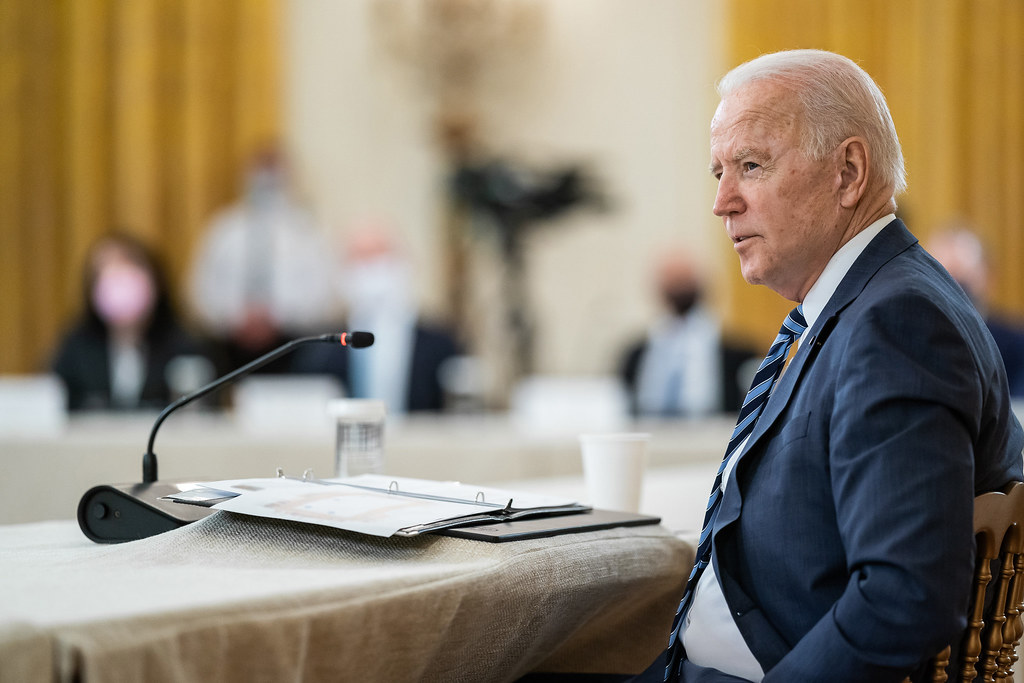 Playbook: “Biden will hold a big, splashy BIF-signing ceremony Monday, his first opportunity to begin to turn these numbers around. But despite the bill’s bipartisan support, it looks like it will be an overwhelmingly Democratic affair.”

Meanwhile, Donald Trump escalated his hostilities against Republican officials who do not do as he wishes in a statement Saturday night, calling on “good and smart America First Republican patriots to run primary campaigns” against GOP House members who voted for the BIF.

Said Trump: “Based on the fact that the Old Crow convinced many Republican Senators to vote for the Bill, greatly jeopardizing their chance of winning re-election, and that he led the way, he should go to the signing and put up with the scorn from Great Republican Patriots that are already lambasting him.”

Daily Beast: “In a time of crisis, people tend to come together. It frequently happens after natural disasters like hurricanes and earthquakes, and during times of national strife like WWII and the months after 9/11. Regardless of their differences, people typically try to do what they can to help others when they’re facing dire circumstances.”

“The Covid-19 pandemic has not, however, been a time of national healing and unity in the U.S. Debates over lockdowns, mask mandates, and vaccination only exacerbated divisions. Polarized politics maimed the public health response to Covid. The pandemic brightened the spotlight on how tribal America has become.”

“U.S. consumer sentiment unexpectedly collapsed in early November as Americans grew increasingly concerned about rising prices and the inflationary impact on their finances,” Bloomberg reports.  “Consumers expect inflation to rise 4.9% over the next year, the highest since 2008.”

Newly released documents show that top political officials in the Trump White House tried to block public health guidance from the CDC and to eliminate evidence of political interference into scientists’ reports on the coronavirus, The Hill reports.

“The new commander of the Oklahoma National Guard has declared the organization will not enforce the Defense Department’s COVID-19 vaccine mandate on its troops, according to local media outlets,” the Army Times reports.

“Army Brig. Gen. Thomas Mancino was announced as the state’s new adjutant general Wednesday, though he has not yet been confirmed by the state Senate.”

“The governor’s request marks the latest instance of government and school officials around the country — including in Texas, Virginia, Ohio and New Jersey — aiming to rid books from school libraries that contain LGBTQ and race-related content.”

New York Magazine: “The idea of Andrew Cuomo giving up power was so contrary to his character that some in Albany feared he might somehow reverse himself after announcing his resignation and dare Albany to actually impeach him. Many more in New York politics worry he will use the $18 million sitting in his campaign’s war chest to run again or retaliate against his enemies. One Albany lawmaker, who requested anonymity owing to their fear of reprisal, said they are concerned Cuomo could bankroll an opponent in their district. Those who know him say they doubt he’ll mount an imminent comeback but said he is keeping his options open.”

Said Cuomo: “I don’t know what the future holds. I’m at peace. Look, it’s simple: I trust the people and the truth will win out.”

“Cuomo’s routine hasn’t changed much since he left office: consuming television news and phoning both allies and journalists.”

“President Biden is expected to announce the nomination of former FDA commissioner Robert Califf to return as the agency’s head, ending a difficult, months-long search to find a leader for the sprawling bureaucracy on the front lines of the coronavirus pandemic,” the Washington Post reports.

Writes McConnell: “Biden may have wanted to appear that he was sidestepping the issue by merely setting up a commission to study it. Don’t be misled. This was radical and unacceptable presidential behavior, part of a larger campaign to make independent judges feel as though they are on probation.”

Sen. Ron Johnson (R-WI) told the Milwaukee Journal Sentinel that that Wisconsin’s Republican legislators should seize power in running the state’s federal elections, without regard to Gov. Tony Evers (D) or the state’s election commission.

Said Johnson: “There’s no mention of the governor in the Constitution. It says state legislatures, and so if I were running the joint — and I’m not — I would come out and I would just say, ‘We’re reclaiming our authority. Don’t listen to the Wisconsin Elections Commission anymore. Their guidances are null and void.’”

Washington Post: “After the Jan. 6 attack on the Capitol, scores of donors and companies made public or private statements… vowing to withhold or rethink their funding for the GOP. But a review of attendees at elite donor retreats, financial filings and interviews with party officials, donors and fundraisers indicates the GOP has had a booming financial year, retaining significant support from many Fortune 500 companies and the city’s most influential lobbying shops, including some contributors who initially balked in the wake of the Jan. 6 attack.”

NBC News: “Domestic extremists continue to exploit false narratives to promote violence online, calling for attacks on members of Congress and public health and school officials, even as they share information about how to build bombs, according to a new intelligence bulletin by the Department of Homeland Security that paints a picture of persistent danger.”

“In between negotiating sessions that have raised his profile in Washington and across the nation, Manchin has held multiple conversations regarding this book project… And the project has reached the stage of a book proposal being drafted. Manchin has discussed whether the best time to present a proposal to publishers would be during the ongoing drama over the Build Back Better legislation or after a final deal is reached.”

John Heilemann, who wrote Game Change with Mark Halperin, has a new book on the 2020 election coming out titled, Hell and High Water.

“Heilemann departs from voice-of-God narration and reconstructed ‘insider’ history to render a vivid, first-person chronicle of what he saw on the campaign trail against the apocalyptic backdrop of 2020—and what he knows from a relationship with Biden that goes back over thirty years.”