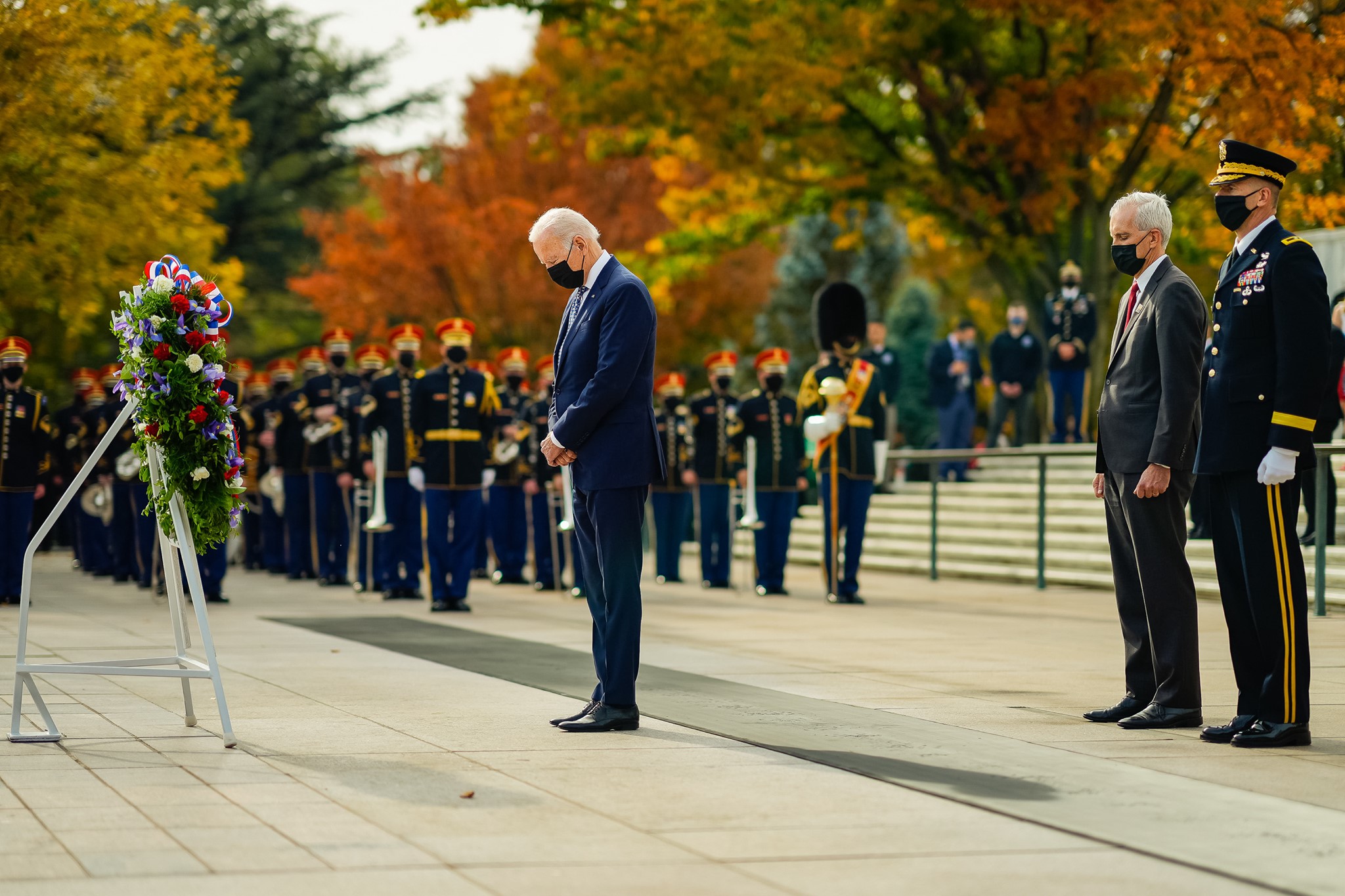 Steve Bannon was indicted by a federal grand jury on two counts of contempt of Congress stemming from his failure to comply with a subpoena issued by the Jan. 6 Select Committee.

Attorney General Merrick Garland said the charges reflect the Justice Department’s commitment to “show the American people by word and deed that the department adheres to the rule of law, follows the facts and the law and pursues equal justice under the law.”

The Wall Street Journal notes it is “the first such criminal case for the Justice Department in decades.”

Steve Bannon is expected to self-surrender on Monday after being indicted on contempt of Congress charges and will appear in court later that afternoon, CNN reports.

Steve Bannon was in the middle of a live webcast of his “War Room” show while MSNBC aired on a TV directly behind him with the chyron: “Bannon indicted for contempt of Congress.”

“Exhausted negotiators from nearly 200 nations struck a deal Saturday intended to propel the world toward more urgent climate action, but without offering the transformative breakthrough scientists say must happen if humanity is to avert disastrous planetary warming,” the Washington Post reports.

Axios: “However, the talks fell short of meeting developing countries’ demands for access to funding to compensate them for climate-related losses.”

“As international climate talks in Glasgow dragged into deep overtime, organizers released a new draft agreement on Saturday morning that they hope could be the basis for a new global deal to tackle climate change,” the New York Times reports.

“The latest draft, which is broadly similar to one released on Friday, calls on nations to return next year with stronger pledges to cut planet-warming emissions in this decade.”

Washington Post: Why has it been so hard to get fossil fuels mentioned in U.N. climate deals?

“Democrats managed to strike a compromise on drug prices to advance their sweeping social spending bill. But as the House prepares to send the package to the Senate, the way the plan would extend price controls beyond Medicare to private health coverage is stoking another battle over the package,” Politico reports.

“At issue is Democrats’ push to penalize drugmakers if they hike prices of medicine faster than inflation, a provision Republicans and the drug industry see as government overreach — and, they say, a violation of the Senate’s parliamentary rules for considering the bill because it’s a non-budgetary item.”

“In private, Sen. Joe Manchin (D-WV) has had cordial conversations with the House’s progressive caucus chair, Rep. Pramila Jayapal (D-WA), but he has also informed her that she doesn’t have leverage over him,” CNN reports.

Speaker Nancy Pelosi told lawmakers that proxy voting in the House of Representatives would continue through the end of the year.

“The U.S. is raising the alarm with European Union allies that Russia may be weighing a potential invasion of Ukraine as tensions flare between Moscow and the bloc over migrants and energy supplies,” Bloomberg reports.

“U.S. officials, increasingly alarmed by Russia’s monthslong troop build-up near Ukraine, are warning their European counterparts that the Kremlin may be on the verge of another invasion of that country,” Politico reports.

Bloomberg: “Russian units newly arrived along the border have taken to repositioning themselves under the cover of night, a change from previous troop buildups when Moscow made big, public displays of moving armor and troops on railways and highways during the day.”

When asked whether Russia is heeding U.S. warnings to back off Ukraine, Vice President Kamala Harris told reporters she cannot reveal classified info but “we are very concerned.”

“In the last days of the battle against the Islamic State in Syria, when members of the once-fierce caliphate were cornered in a dirt field next to a town called Baghuz, a U.S. military drone circled high overhead, hunting for military targets. But it saw only a large crowd of women and children huddled against a river bank,” the New York Times reports.

“Without warning, an American F-15E attack jet streaked across the drone’s high-definition field of vision and dropped a 500-pound bomb on the crowd, swallowing it in a shuddering blast. As the smoke cleared, a few people stumbled away in search of cover. Then a jet tracking them dropped one 2,000-pound bomb, then another, killing most of the survivors.”

You can see that the video was edited because at the 11-second mark Biden’s hand suddenly vanishes.

New York Times: “From congressional offices to community meeting rooms, threats of violence are becoming commonplace among a significant segment of the Republican Party. Ten months after rioters attacked the United States Capitol on Jan. 6, and after four years of a president who often spoke in violent terms about his adversaries, right-wing Republicans are talking more openly and frequently about the use of force as justifiable in opposition to those who dislodged him from power.”

“In Washington, where decorum and civility are still given lip service, violent or threatening language still remains uncommon, if not unheard-of, among lawmakers who spend a great deal of time in the same building. But among the most fervent conservatives, who play an outsize role in primary contests and provide the party with its activist energy, the belief that the country is at a crossroads that could require armed confrontation is no longer limited to the fringe.”

“A federal appeals court has kept its block in place against a federal mandate that all large employers require their workers to get vaccinated against the coronavirus or submit to weekly testing starting in January, declaring that the rule ‘grossly exceeds’ the authority of the occupational safety agency that issued it,” the New York Times reports.

“The ruling by the panel of the Fifth Circuit is unlikely to be the final word. Some challenges to the mandate are in other circuits, and the cases will be consolidated before a randomly chosen one of those jurisdictions. The Supreme Court is expected to eventually decide the matter.”

“Vice President Kamala Harris spent hours talking with Emmanuel Macron, the French president, managing to skirt a recent diplomatic rift between the two allies over an Australian submarine deal. She attended a conference on promoting democratic elections in Libya. And she secured a commitment for the United States to join a nonbinding international declaration to protect civilians against cyberattacks,” the New York Times reports,

“During a tightly-choreographed trip to France this week, Ms. Harris appeared determined to assert herself as a diplomatic asset for a president who believes he knows more about the process — and the vice presidency — than most.”

Washington Post: “For now, at least, Harris and Buttigieg, barrier-breaking Democrats who failed in their initial White House bids, are the highest-profile prospects to succeed Biden at the top of the Democratic ticket in 2024 or 2028, although other promising candidates are all but certain to emerge. Biden has said he plans to run for reelection, but as he nears his 79th birthday, even some of his allies are not sure he will.”

“Many Democrats see Harris’s and Buttigieg’s political fortunes as diverging in the first 10 months of Biden’s presidency. While Buttigieg has become a visible advocate for the administration’s top legislative achievement, Harris often has been associated with its biggest trouble areas, including immigration and voting rights — and, in the past week, U.S.-French relations.”

David Leonhardt: “The bottom line is that Covid now presents the sort of risk to most vaccinated people that we unthinkingly accept in other parts of life. And there is not going to be a day when we wake up to headlines proclaiming that Covid is defeated. In many ways, the future of the virus has arrived.”

“All of which raises the question of which precautions should end — now or soon — and which should become permanent.”

“Should offices remain mostly empty? Should schools require children and teachers to wear masks? Should classrooms go remote again when they identify a new Covid case? For how long should individuals organize their own lives around a fear of Covid?”

Bloomberg: “It’s become the conventional wisdom that the U.S. economy is built on Americans’ endless appetite to buy lots and lots of stuff. Household consumption makes up about 67% of GDP. When the economy falters, we’re told spending is our patriotic duty.”

“But suddenly, Americans can’t spend like they used to. Store shelves are emptying, and it can take months to find a car, refrigerator or sofa. If this continues, we may need to learn to do without — and, horrors, live more like the Europeans. That actually might not be a bad thing, because the U.S. economy could be healthier if it were less reliant on consumption.”

“After all, Americans haven’t always acted like this. We’ve entered an age of overabundance. We consume much more than we used to and more than other countries. Consumption per capita grew about 65% from 1990 to 2015, compared with about 35% growth in Europe. Household consumption makes up only about 50% of GDP in Germany.”

Former Gov. Chris Christie (D) reveals in his new book “how worried he and others were for his survival when he became infected with the coronavirus after being at the White House around the same time that Mr. Trump and several other aides contracted Covid-19. Mr. Christie writes that his priest arrived in the hospital and rubbed oils on his forehead in the sign of the cross, praying over him,” the New York Times reports.

“He got a call from a hospitalized Mr. Trump, who had one main concern: ‘Are you gonna say you got it from me?’”