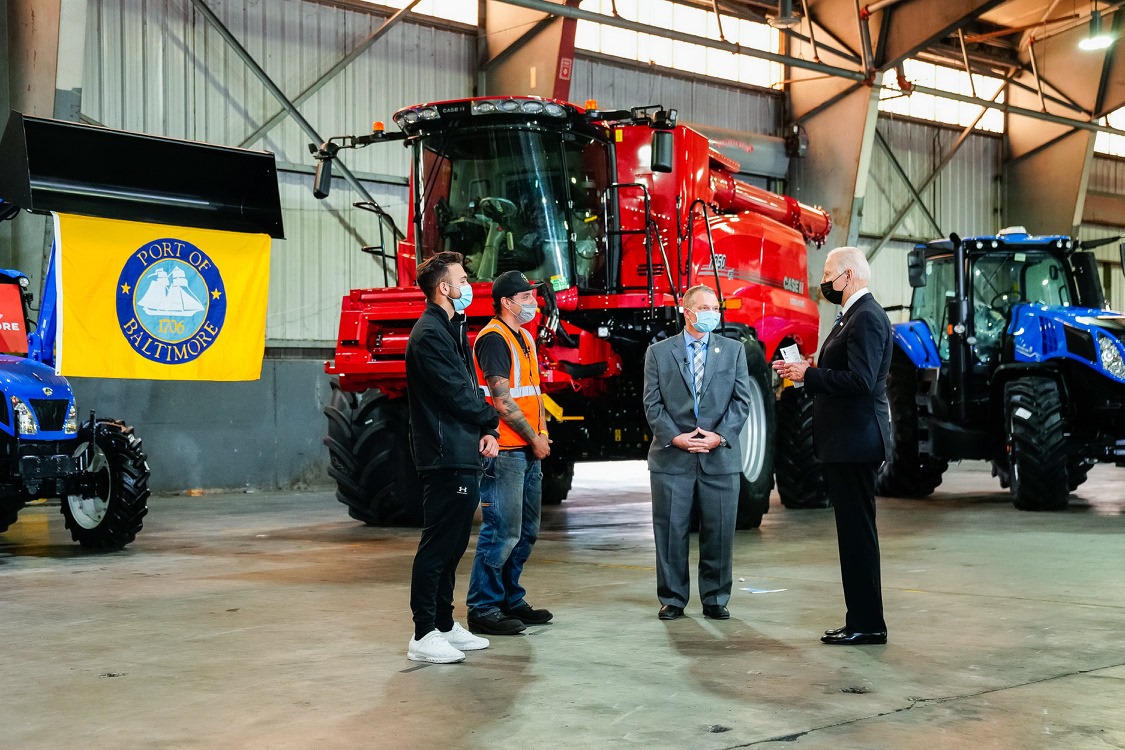 “More ominous for Democrats was the Virginia outcome among the half of non-college White voters there who are not evangelicals — a group that is more populous in the key Rust Belt battlegrounds. In 2018, the exit polls found that Democrats carried a majority of those voters in House races nationwide; in 2020, the exit polls and other post-election analyses found that Biden won 42% to 45% of them. But Youngkin last week carried fully 65% of them, holding McAuliffe to just 35%, a result that presages ominous losses for Democrats across the Midwest if it holds through the midterm elections.”

Former Gov. Chris Christie (R) hit back at Donald Trump in an interview with Axios.

Said Christie: “I’m not gonna get into a back-and-forth with Donald Trump. But what I will say is this: When I ran for reelection in 2013, I got 60% of the vote. When he ran for reelection, he lost to Joe Biden.”

Daily Beast: “When Chris Christie withdrew from consideration to be Donald Trump’s White House chief of staff in 2018, multiple outlets reported it was for family considerations and that the ex-governor was not officially offered the gig.”

“But that may not be the full story. In his new book, Republican Rescue, due out next week from Threshold Editions and obtained by The Daily Beast, Christie claims that he was, indeed, offered the powerful position—and that he turned it down at least in part because of Trump’s big mouth.”

“Donald Trump is expected to maintain a prolific schedule of campaign rallies to boost Republicans in next year’s midterms. But on the heels of Gov.-elect Glenn Youngkin’s victory in Virginia — accomplished without a single Trump cameo — some of the former President’s aides and allies warn there could be parts of the country where he may now be encouraged to keep his distance,” CNN reports.

“The ‘stay away strategy,’ as one aide described it, would involve Trump steering clear of states or districts where a confluence of factors — such as his popularity and the demographic makeup — could mean his presence might sabotage Republican chances.”

Said one person close to Trump: “There are absolutely places he shouldn’t go. I wouldn’t put him in Maryland, New Hampshire, or Arizona.”

WISCONSIN THIRD CD. Former CIA officer Deb McGrath said Tuesday that she was competing in the primary to succeed her fellow Democrat, retiring Rep. Ron Kind, in what is currently a swingy seat in southwestern Wisconsin. McGrath is the daughter of Al Baldus, a Democrat who was elected to a previous version of this district in 1974 and narrowly lost it six years later.

VIRGINIA SEVENTH CD. Republican state Sen. Amanda Chase filed paperwork last week for a potential congressional bid, but the far-right legislator now says, “I’ve not officially announced and we won’t announce that until after the lines have been officially drawn because we don’t know where we’re going to land.”

TEXAS THIRTY-FIFTH CD. Democratic state Rep. Trey Martinez Fischer said Tuesday that he would seek re-election rather than run for the open 35th Congressional District, adding that he’d be involved in fighting the new gerrymander in court.

That announcement came weeks after the Republican legislature made a last-minute change to the congressional map that placed Martinez Fischer’s home in the 35th, a move he acknowledged was done at his request. However, a fellow state representative may have deterred him from running after all: Primary School writes that Martinez Fischer is an ally of Eddie Rodriguez, a fellow state representative who has filed paperwork for a campaign and has an announcement set for Wednesday morning. He joins Austin City Councilman Greg Casar in the Democratic primary.

NEW YORK TWENTY-FOURTH CD. Physician assistant Tim Ko said this week that he would launch a primary challenge against Rep. John Katko, who is one of the 10 House Republicans who voted to impeach Donald Trump. Ko is a first-time candidate, but he could have a prominent ally in his corner soon. The Conservative Party, which is often aligned with the state GOP, is set to endorse a candidate on Nov. 16, and Onondaga County chair Bernie Ment said he’d advocate for Ko next week.

The current version of the 24th District went for Joe Biden 53-44, which makes Katko one of just nine Republicans in a Biden constituency. There’s some speculation, though, that redistricting could lead to a primary between Katko and hard-right Rep. Claudia Tenney, and Ko says he would drop out and support the 22nd District congresswoman if that happened.

Air Force veteran Sarah Klee Hood, who just won a seat on the DeWitt Town Board last week, kicked off a bid for New York’s 24th Congressional District on Wednesday. She joins two other former members of the military, Navy veteran Francis Conole and Army veteran Steven Holden, in the Democratic primary.

NEW YORK TWENTY-SECOND CD. Democrat Josh Riley, an attorney who is a former counsel on the U.S. Senate Judiciary Committee, has announced a bid against Republican Rep. Claudia Tenney. The current version of this Utica-area seat backed Donald Trump 55-43, though it could look very different once redistricting is complete.

NEVADA FOURTH CD. Boxer Jessie Vargas said Monday that he would seek the Republican nomination to take on Democratic Rep. Steven Horsford in Las Vegas’ northern suburbs. The candidate indicated he could do some self-funding, saying he did “very well” in his career in the ring.

Vargas, whose parents immigrated from Mexico, was on Mexico’s 2008 ​​Olympic team, and he was the 2016 world champion welterweight. He gave up the title later that year when he badly lost to Philippines Sen. Manny Pacquiao (who, coincidently, is running next year for president of his country), though Vargas received a $2.8 million guaranteed payout for that fight.

NORTH CAROLINA SIXTH CD. While Hillsborough Town Commissioner Matt Hughes, who is an official in the state Democratic Party, expressed interest last month in running to succeed retiring Rep. David Price, sounds like he’s now ruled it out. Hughes responded to Durham County Commissioner Nida Allam’s campaign kickoff on Monday by tweeting, “I’m so proud of @NidaAllam as she begins her next phase of public service.”

Another Democrat we hadn’t previously mentioned is former Wake County Commissioner Jessica Holmes, who also said she was interested last month  before the Republican-dominated legislature passed its new gerrymander. Holmes ran statewide last year for the open post of commissioner of labor and lost the general election by a close 51-49 margin.

North Carolina’s candidate filing deadline is Dec. 17, so we’ll have a full candidate lineup before too long.

Durham County Commissioner Nida Allam, who last year became the first Muslim woman to win elective office in North Carolina, announced on Monday that she’ll run for the redrawn 6th Congressional District. Allam had been considering a bid for the old 4th District, the predecessor to the new 6th, which became open when veteran Democratic Rep. David Price announced his retirement last month. She joins state Sen. Wiley Nickel in the Democratic primary. The 6th is a safely blue seat in the Chapel Hill-Durham area that would have voted for Joe Biden 73-25 last year, according to Dave’s Redistricting App.

MARYLAND FOURTH CD. Former Del. Angela Angel has filed paperwork for a potential campaign to succeed Rep. Anthony Brown, a fellow Democrat who is leaving to run for state attorney general, in a safely blue seat in the D.C. suburbs. Angel was elected to her only term in 2014, and she earned headlines two years later when she launched a high-profile, but unsuccessful, attempt to pressure legislative leaders to act on her domestic violence bill. She ran for the state Senate in 2018 but lost the primary 55-37 to a fellow delegate.

Meanwhile, Del. Jazz Lewis earned an endorsement Monday from House Majority Leader Steny Hoyer, who is his old boss and the congressman from the neighboring 5th District.

CALIFORNIA TENTH CD. Politico reports that former Trump official Ricky Gill is thinking of taking on Democratic Rep. Josh Harder in what is currently a competitive seat in the Modesto area.

Gill was on the ballot almost a decade ago at the age of 25 when he challenged another Democratic congressman, Jerry McNerney, in the neighboring 9th District. Gill raised $3 million for a campaign that attracted national attention, but McNerney beat him 56-44 as Barack Obama was carrying that constituency by a 58-40 spread.

NEW JERSEY THIRD CD. Wealthy yacht manufacturer and yoga instructor Robert Healey has entered the race against Democratic Rep. Andy Kim in New Jersey’s 3rd Congressional District, though the seat’s precise future remains uncertain as the Garden State’s redistricting commission has yet to release even a draft map. The New Jersey Globe’s David Wildstein previously reported that Healey “is expected to self-fund a major portion of his campaign” and noted that he’s a former punk rock singer who is “[h]eavily-tattooed with long hair and nipple piercings,” though in a more recent photo, he appears to have cut his hair and shaved his beard.

SOUTH CAROLINA ELEVENTH CD. Physician Annie Andrews has announced a challenge to Republican Rep. Nancy Mace in South Carolina’s 1st Congressional District, making her the first notable Democrat to do so. The 1st is tough territory for Democrats, though—it voted 52-46 for Donald Trump last year as Mace was ousting Rep. Joe Cunningham 41-39—and Republicans in the legislature may try to make it redder in the redistricting process.