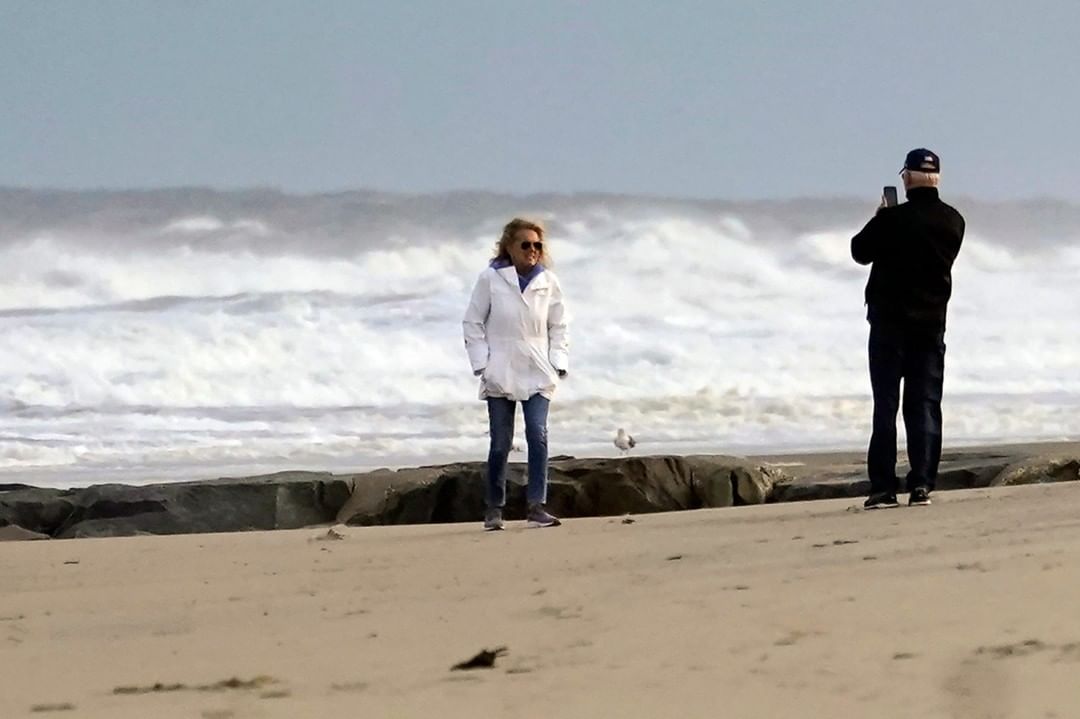 “President Biden plans to install a point-person in charge of infrastructure to ensure his administration properly implements its trillion-dollar legislation,” Axios reports.

“Biden and his top aides know they need to flawlessly execute on their mammoth plan. It may be Biden’s best — and, perhaps, only remaining — opportunity to show voters Democrats can deliver major changes to improve people’s lives.”

“It’s not yet known who Biden will pick to fill the job, but if history is a guide, it will be somebody he’s known for a long time and trusts implicitly.”

“After months of deference to Congress, President Joe Biden moved more assertively last week to shepherd half his domestic agenda into law. With the other half still in limbo, Democrats want some of that Biden punch again,” Politico reports.

“Outside groups fear that congressional Democrats could come up short on Biden’s social spending package. They are concerned that moderates in the House may end up buckling if the budget scores on the bill come back worse than anticipated. And there is residual anxiety that one of the two wavering Senate Democrats — Joe Manchin of West Virginia and Kyrsten Sinema of Arizona — could vote ‘no’ over concerns about inflation and long-term debt.”

Senate Minority Leader Mitch McConnell (R-KY) said that he won’t attend a White House signing ceremony for a bipartisan infrastructure deal that he voted for and has touted while in Kentucky this week, The Hill reports.

“Whatever the House does is irrelevant. The final bill is gonna be written in the Senate, and it’ll be written by two people.”  — Senate Minority Leader Mitch McConnell, on the Flyover Country podcast, about the budget reconciliation bill.

Washington Post: “To meet the demands of Sen. Kyrsten Sinema (D-AZ), the White House agreed to drop a proposed 3 percent tax on taxpayers earning over $5 million, instead agreeing to target the higher tax to those earning more than $10 million… The move exempted roughly 35,000 of the wealthiest Americans, or approximately .02 percent of the richest 1 percent, from the new levy.”

“The Biden administration also agreed to pull a proposed tax in late October targeting 700 billionaires after it faced criticism from a number of top Democrats, including House Speaker Nancy Pelosi (Calif.), who complained in one phone call with senior party officials on Oct. 26 that the plan amounted to a publicity stunt…”

“And while the White House is pushing a new 15 percent minimum tax on corporations, the measure faces fresh objections this week from renewable-energy groups who are warning it could undermine the party’s climate goals.”

Jonathan Chait: “Just how did we arrive at such an absurd point? A short history is in order.”

“Most millionaires would get a tax cut under House Democrats’ reconciliation plan, according to a new analysis that’s sure to get lawmakers’ attention,” Politico reports.

“About two-thirds of people making more than $1 million would see a tax cut next year averaging $16,800.”

“A federal appeals court on Thursday blocked the imminent release of records of former president Donald Trump’s White House calls and activities related to the Jan. 6 Capitol attack after a lower court found that President Biden can waive his predecessor’s claim to executive privilege,” the Washington Post reports.

“The U.S. Court of Appeals for the D.C. Circuit granted a temporary injunction while it considers Trump’s request to hold off any release pending appeal, and fast-tracked oral arguments for a hearing Nov. 30.”

The interview was released today presumably to generate buzz for Karl’s new book, Betrayal: The Final Act of the Trump Show, which is published next week. But considering the gravity of the subject — a violent insurrection to overturn an election — that doesn’t seem like the kind of news that should wait for a book to be published.

And just yesterday we learned about another forthcoming book, This Will Not Pass: Trump, Biden and the Battle for American Democracy by New York Times reporters Jonathan Martin and Alexander Burns. That book won’t be out early next year, but in a tweet designed to generate pre-orders, Martin noted: “We have news most every page, docs and secret recordings.”

That’s a clear admission that two prominent political reporters are actively withholding information on what they themselves call “the battle for American democracy.” It’s shocking that the news organizations allow this arrangement with their reporters. Until they stop it, you’re right to question their motives.

“A record 4.4 million Americans quit their jobs in September, as job openings remained near record levels according to federal data, a sign of how imbalances in the labor market continue to complicate the economic recovery 20 months into the pandemic,” the Washington Post reports.

“Those numbers are up from August, when 4.3 million people who quit their jobs in August — about 2.9 percent of the workforce.”

Washington Post: “Anxious about a surge of coronavirus infections enveloping Europe as cases tick up in the United States, senior health officials in the Biden administration are pressing urgently to offer vaccine booster shots to all adults. But support for the renewed push is not unanimous.”

“Centers for Disease Control and Prevention Director Rochelle Walensky has expressed caution about making extra shots so broadly available now… As a result, tension is rising among officials over how quickly to proceed and who should get the shots.”

Politico: “McCarthy and his allies are elated by the strong GOP showing in this month’s elections, ambitiously projecting a midterm gain next year to rival the 63-seat wave that swamped House Democrats in 2010. But if Democrats can tamp down the number of Republican victories next fall, then some of McCarthy’s own members say the Californian could hit potholes on his road to the gavel.”

“While the GOP is widely favored to take back the House, McCarthy needs a majority of votes on the floor in early 2023 in order to ascend to speaker. The minority leader’s math problem is simple: The fewer seats Republicans pick up in the midterms, the more powerful his skeptics will become.”

Associated Press: “In the past week, Republican Rep. Paul Gosar tweeted a video showing a character with his face killing a figure with Rep. Alexandria Ocasio-Cortez’s face. Several of the 13 House Republicans who backed a bipartisan infrastructure bill said they faced threats after their vote. In one profanity-laced voicemail, a caller labeled Rep. Fred Upton a ‘traitor’ and wished death for the Michigan Republican, his family and staff.”

“The response from Republican leaders? Silence.”

Politico: “The ferocity of the reaction against the 13 House members who voted with Democrats on the House-passed infrastructure bill appeared to signal a new stage in the party’s evolution, marking the GOP as so reflexively anti-Biden that even spending on infrastructure — an issue that Donald Trump once obsessed over as president — is too radioactive to support.”

“It’s a hardening of the party that’s already shaping its approach to the midterms, ensuring not only that Republicans up and down the ballot will be running against the sitting president, but that they will not support anything that might help Biden improve his sunken public approval ratings in the interim.”

Jim VandeHei: “Other than conservative courts, toughness on immigration and hostility toward modern liberalism, it’s been impossible to specify the core and connective ideology of Republicans under Trump.”

“Now, Republicans are rallying around a plan to break up with corporate America and oppose Big Business, Big Tech, Big Media, Big Education — and big government.”

Completely ignored in this piece is the GOP’s position on race.

“Since the earliest days of the pandemic, there has been one collective goal for bringing it to an end: achieving herd immunity. That’s when so many people are immune to a virus that it runs out of potential hosts to infect, causing an outbreak to sputter out,” the Los Angeles Times reports.

“Many Americans embraced the novel farmyard phrase, and with it, the projection that once 70% to 80% or 85% of the population was vaccinated against Covid-19, the virus would go away and the pandemic would be over.”

“Now the herd is restless. And experts at the Centers for Disease Control and Prevention have set aside herd immunity as a national goal.”

Nate Cohn: “Democrats now have a Washington trifecta — command of the White House and both chambers of Congress. If the results of last week’s elections in Virginia and elsewhere are any indication, they may not retain it after next November’s midterm elections. And a decade or longer may pass before they win a trifecta again.”

“The unusual structure of American government, combined with the electorate’s reflexive instinct to check the party in power, makes it hard for any party to retain a hold on both the White House and Congress for long.”

“Since World War II, political parties have waited an average of 14 years to regain full control of government after losing it. Only one president — Harry Truman — has lost Congress and retaken it later. In every other case, the president’s party regained a trifecta only after losing the White House.”

“Austria’s chancellor on Thursday stepped up threats of lockdown measures for unvaccinated people, as new coronavirus cases in the Alpine nation are soaring,” the AP reports.

“A San Francisco police officer died battling Covid-19 after missing the city’s deadline to be inoculated and being placed on leave for failing to follow the health safety rules,” the San Francisco Chronicle reports.

A new Punchbowl News survey of senior Capitol Hill aides finds 60% says Nancy Pelosi is the most powerful congressional leader, followed by Mitch McConnell at 28% and then “other.”  And then in fourth with 6% was Chuck Schumer.

“Oklahoma’s highest court on Tuesday threw out a 2019 ruling that required Johnson & Johnson to pay the state $465 million for its role in the opioid epidemic,” the New York Times reports.

Oklahoma Gov. Kevin Stitt (R) “directed the State Department of Health to stop issuing birth certificates listing a nonbinary option instead of designating a gender, despite a settlement agreement in a civil case in which the agency agreed to do so,” the AP reports.

San Francisco’s Mayor London Breed is backing the effort to recall three school board members, saying she is supporting “the parents’ call for change,” the San Francisco Chronicle reports.

Politico: “The former New Jersey governor has launched what amounts to a de facto exploratory bid for president, and it’s already put him on a collision course with his longtime political ally.”

“While Christie’s criticism of the party’s focus on the 2020 election results and subtle knocks on other aspects of Trump’s term are designed to create a distinct lane for him in the 2024 primary, he’s also courting confrontation with a former president who still commands the loyalty of the Republican base.”

Said GOP strategist Scott Reed: “He’s traveling the country, saying what he learned and saying he’s not afraid of Donald Trump. That sets him out in a different lane from anyone else who might run for president in the party. Christie is a guy who knows how to create a narrative. He can throw a punch and he can take a punch.”

Tim Miller: “Like every other pathetic, podgy, scared, insecure bully who has ever disgraced a schoolyard, Chris Christie talks a big game. But when he was called upon to meet the biggest threat of his life—a doughy, soft-handed trust-fund baby with authoritarian aspirations—Christie didn’t just walk away from an argument. He waddled as fast as he could go in his urine-soaked pull-ups.”

Former President Donald Trump claimed in a statement his “envoy ambassador” Ric Grenell visited the Kosovo-Serbia border to highlight an agreement brokered during his administration.

A White House spokesperson mocked Donald Trump after he said he was sending his “envoy ambassador” to Kosovo, Yahoo News reports.

Said the official: “Outside of his very active imagination, Donald Trump is no longer President and doesn’t have any ‘envoy ambassadors’ representing the United States.”