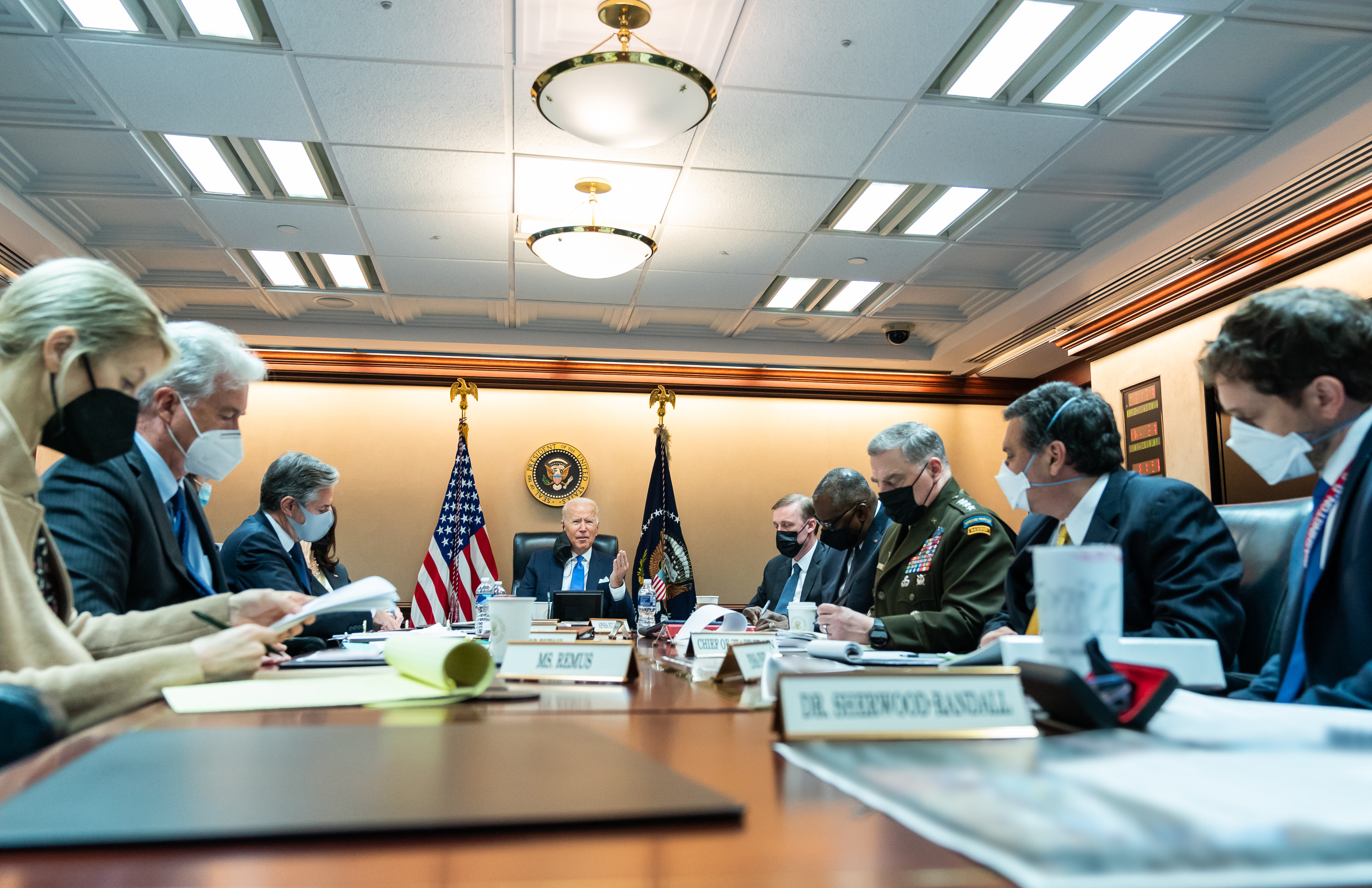 President Joe Biden will sign a bipartisan infrastructure bill on Monday at a ceremony that will include members of Congress who helped write the legislation, Reuters reports.

New York Times: “The package is already popular, with a solid majority of voters saying they support its funding increases for rail, roads, ports, water systems, broadband and the power grid. But the president and his allies are under no illusion about what they are really selling — Mr. Biden himself, and his theory-of-the-case for American politics, that delivering on concrete campaign promises is the only way to transcend the rage and culture-war messaging of Trump-era politics.”

“Yet the challenges facing Mr. Biden — who, as President Barack Obama’s vice president a decade ago, had some success serving as a traveling salesman for the stimulus and health care bills — are formidable.”

Stephen Collinson: “Joe Biden’s next political nightmare is inflation, a force that can destroy family budgets and political careers and is being driven by domestic and global factors tough for a president to quickly fix…”

“Inflation is an especially damaging political force because of its immediate impact on the well-being on voters. A rate of 6.2% is well above levels at which policymakers can be relaxed about rising prices and threatens to also wipe out wage gains, in effect giving everyone in the country a pay cut.”

CNBC: “The Labor Department reported Friday that average hourly earnings increased 0.4% in October, about in line with estimates. That was the good news.”

“However, the department reported Wednesday that top-line inflation for the month increased 0.9%, far more than what had been expected. That was the bad news – very bad news, in fact.”

“That’s because it meant that all told, real average hourly earnings when accounting for inflation, actually decreased 0.5% for the month.”

“A federal judge on Wednesday night rejected the latest attempt by former President Donald Trump to block the release of documents from his administration surrounding the events of Jan. 6,” NBC News reports.

“Trump’s lawyers have promised to appeal to the U.S. Court of Appeals for the District of Columbia Circuit, which could send to the case to the U.S. Supreme Court.”

“Former President Donald Trump has asked a federal appeals court to briefly stop the release of key White House records from his presidency to the House January 6 committee while he appeals a lower court’s decision that he can’t claim executive privilege to keep them secret,” CNN reports.

“The filing is a last-ditch effort ahead of a Friday 6 p.m. deadline for the House committee investigating the Capitol attack to receive 46 records, including White House call logs, visitor logs, drafts of speeches and three handwritten memos from Trump’s then-chief of staff Mark Meadows.”

“Conservative furor over what is taught in public schools reached a fever pitch in Texas on Wednesday, as Republican Gov. Greg Abbott announced a criminal probe into what he called ‘pornography’ in school libraries, his third directive on the matter this month,” the AP reports.

A new study finds that 19% of Dallas residents say they have no intention of getting the Covid-19 vaccine, with more than half of that group saying nothing can change their mind, according to Scientific Reports.

A new Monmouth poll finds coronavirus vaccine and mask mandates in schools remain popular with a majority of Americans, as do vaccine requirements for health-care workers and air travel.

Washington Post: “The late summer and early autumn easing of the nation’s burden of new coronavirus infections has come to a halt over the past two weeks… Dramatic drops in caseloads in the Deep South, including the high-population states of Florida and Texas, have been offset by increases in the Mountain West and the northern tier of the country.”

“Twenty-three states have seen at least a 5 percent increase in cases over the past two weeks, with Illinois, Minnesota, and Vermont reporting 50 percent more cases on average.”

“The House Select committee investigating the Jan. 6 attack on the Capitol and the White House are ramping up the pressure on former Trump White House Chief of Staff Mark Meadows to cooperate with the probe into the insurrection as the committee zeros in on former president Donald Trump’s inner circle,” the Washington Post reports.

“White House Deputy Counsel Jonathan Su sent a letter to Meadows’s lawyer, George Terwilliger, Thursday morning notifying him that President Biden will not assert executive privilege or immunity over the documents and deposition requested by the House Select committee related to his client.”

“The Justice Department on Wednesday accused three political operatives of running a scheme to mislead donors and enrich themselves, charging the men with defrauding people of $3.5 million in 2016 and 2017,” the New York Times reports.

“It was the latest indictment against operatives who raise money for what are known as scam PACs, which direct much of the proceeds back to the people who run them.”

“Afghanistan’s ex-finance minister has blamed the government’s fall on corrupt officials who invented ‘ghost soldiers’ and took payments from the Taliban,” the BBC reports.

Khalid Payenda said that “most of the 300,000 troops and police on the government’s books did not exist. He said phantom personnel were added to official lists so that generals could pocket their wages.”

“A Taliban commander with links to al-Qaeda, who was notorious for kidnapping foreign journalists and directing suicide attacks in the Afghan capital has been made governor of Kabul province,” The Telegraph reports.

Rep. Ruben Gallego (D-AZ) told Axios that a disadvantage of having fewer U.S. military veterans in Congress is having less checks on the Department of Defense.

Said Gallego: “It’s to the detriment to the men and women in the military. I mean, this is how you end up in 20-year wars because there were just not enough people that were willing to say to some of these generals that you see on TV all the time, you’re wrong. It’s time to leave.”

Michelle Goldberg: “Democrats need to take this coming onslaught seriously. The school choice movement is old — it’s often dated back to a 1955 essay by Milton Friedman. But Covid has created fertile ground for a renewed push.”

“As many have pointed out, the reason education was such an incendiary issue in the Virginia governor’s race likely had less to do with critical race theory than with parent fury over the drawn-out nightmare of online school. Because America’s response to Covid was so politically polarized, school shutdowns were longest in blue states, and Virginia’s was especially severe; only six states had fewer in-person days last year.”

“Nicaraguans cast ballots Sunday in an election whose result the opposition says is preordained: President Daniel Ortega is expected to win an overwhelming majority, completing his transformation into a 21st century version of the dynastic dictator he helped overthrow as a guerrilla revolutionary more than 40 years ago,” the Wall Street Journal reports.

“Mr. Ortega, who is running with his wife, Vice President Rosario Murillo, is expected to win a fourth consecutive term after he imprisoned seven would-be presidential candidates and 32 other leading businessmen, journalists, political foes, student and peasant leaders.”

“Senior party officials in a closed-door meeting in Beijing approved a decision reassessing the party’s 100-year history and enshrining Mr. Xi in the party’s official firmament of era-defining leaders. The move, signaled in an official summary of the meeting, elevated Mr. Xi to a stature alongside Mao Zedong, the founder of the country’s Communist rule, and Deng Xiaoping, the chief architect of its economic takeoff.”

“The decision to place Mr. Xi among the country’s historical giants will bolster his argument that he is the only leader capable of steering China toward superpower status through uncertain times.”

Bloomberg says it gives Xi a mandate “to potentially rule for life.”

Chinese President Xi Jinping is likely to use a virtual summit meeting, expected next week, to extend a personal invitation to President Biden attend the Winter Olympics in Beijing in February, CNBC reports.

“The invitation would serve as a challenge to Biden to decline, and put the relationship on ice; or accept, and contradict his administration’s own messaging on democracy and human rights.”

House Democrats announced that they will introduce a resolution to censure Rep. Paul Gosar (R-AZ) after he posted an anime-style video that depicted the Arizona Republican and other GOP lawmakers violently attacking President Biden and Rep. Alexandria Ocasio-Cortez (D-NY), The Hill reports.

“He has no business being in Congress. He should have never been elected. He doesn’t belong there… Sadly, the Republican conference is now characterized by numerous kooks and dangerous cranks, of which he is one.”  — Rep. Adam Schiff (D-CA), quoted by ABC News, on Rep. Paul Gosar (R–AZ).

Among Esper’s perceived sins were that he “vowed to be apolitical” in running the Pentagon.

An excerpt from Jonathan Karl’s new book, Betrayal: The Final Act of the Trump Show, in Vanity Fair reveals that a Trump campaign staffer became critically ill after the disastrous Tulsa rally Donald Trump forced his campaign to stage as the coronavirus pandemic raged.

“This employee of the Trump campaign, whose name I’ve been asked not to disclose, was unable to drive home like the others. Instead, this staffer was hospitalized in Tulsa for a week. This staffer had been worried about the dangers of working on the rally because of preexisting conditions that made the prospect of being infected especially dangerous, but the president had demanded an indoor rally despite the warnings of public health officials, and the staffer faithfully responded by helping to organize it. Now that the rally was over, the president was back in Washington complaining bitterly that more people had not shown up, while this campaign worker was stuck in Tulsa, lying in a hospital bed thinking his life was about to end.”