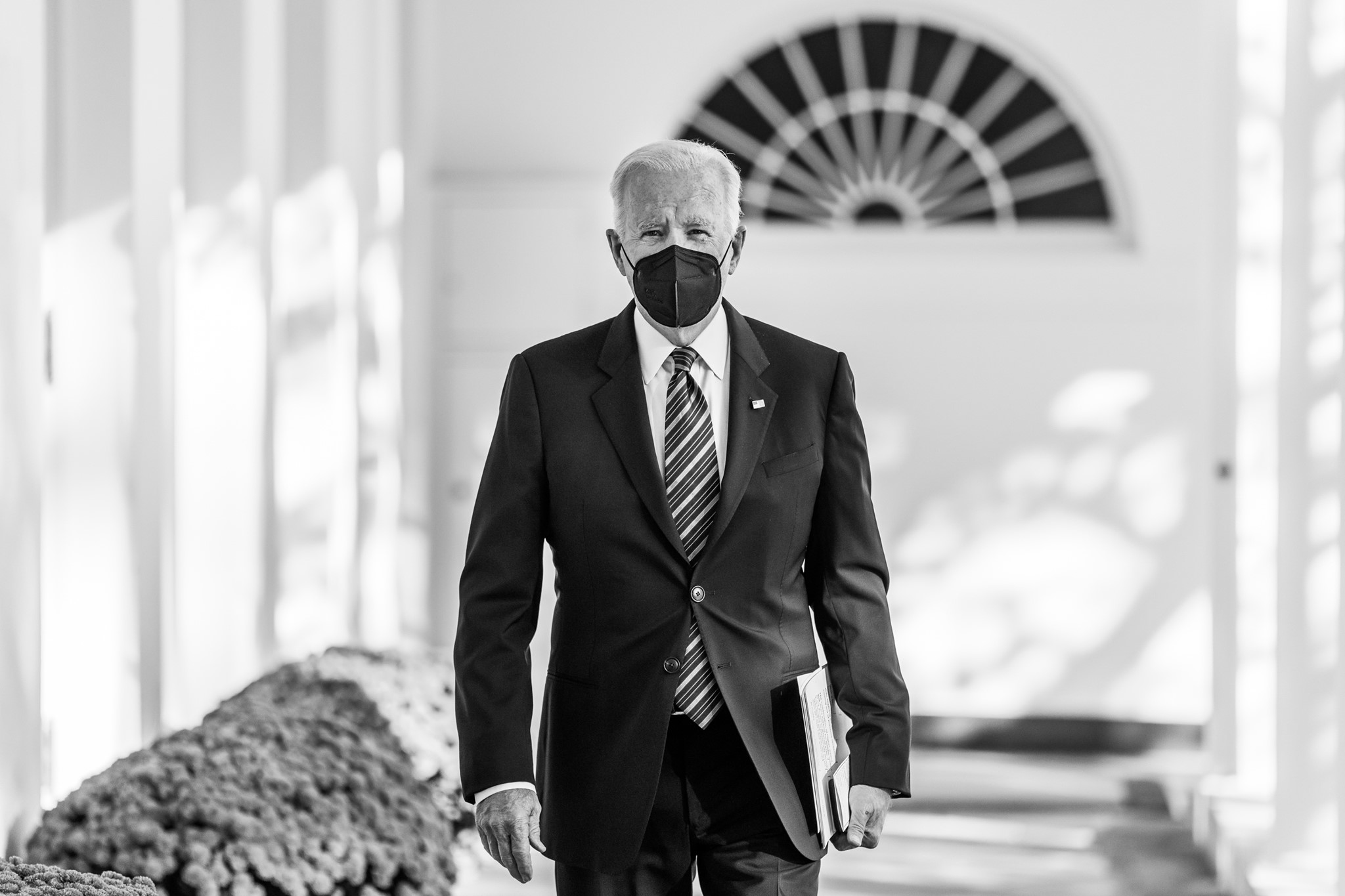 “Inflation across a broad swath of products that consumers buy every day was even worse than expected in October, hitting its highest point in more than 30 years,” CNBC reports. “The consumer price index, which is a basket of products ranging from gasoline and health care to groceries and rents, rose 6.2% from a year ago.”

Neil Irwin: “Core CPI up 0.6%, which is not what you want to see if you embrace the inflation-is-transitory narrative. Inflation right now is broad-based, across most goods and services.”

As the $1.9 trillion pandemic relief package made its way through Congress earlier this year, former Obama economic adviser Larry Summers issued a warning in the Washington Post:

“While there are enormous uncertainties, there is a chance that macroeconomic stimulus on a scale closer to World War II levels than normal recession levels will set off inflationary pressures of a kind we have not seen in a generation, with consequences for the value of the dollar and financial stability.

This will be manageable if monetary and fiscal policy can be rapidly adjusted to address the problem. But given the commitments the Fed has made, administration officials’ dismissal of even the possibility of inflation, and the difficulties in mobilizing congressional support for tax increases or spending cuts, there is the risk of inflation expectations rising sharply. Stimulus measures of the magnitude contemplated are steps into the unknown.”

That was written just two weeks after President Biden was sworn into office.   In a Financial Times interview two months later, Summers went so far as to call the Biden agenda excessive:

“I see substantial risk that the amount of water being poured in vastly exceeds the size of the bathtub.  That could manifest itself, as a much smaller period of excess did during the Vietnam war, in rising inflation and a ratcheting-up of inflation expectations. It could, as has often happened, manifest itself in the Federal Reserve feeling a need for a sharp and surprising increase in interest rates, and the subsequent deceleration of the economy into recession.”

The White House repeatedly dismissed Summers — and even attacked him personally — until just a few months ago when there was a grudging acknowledgement that he might be right. News today that inflation hit a 30-year high is a realization of what many voters simply see when they simply go shopping. And it backs up numerous job approval polls that show Biden is increasingly perceived as not being attentive to their economic concerns.

Sen. Joe Manchin (D-WV) weighed in on latest inflation report: “By all accounts, the threat posed by record inflation to the American people is not ‘transitory’ and is instead getting worse. From the grocery store to the gas pump, Americans know the inflation tax is real and DC can no longer ignore the economic pain Americans feel every day.”

Manchin had previously indicated concerns about the impact of the budget reconciliation package on inflation.

The odds of a budget reconciliation package passing the Senate this year just plummeted big time.

“Even though a full CBO score may not be available for weeks, House moderates believe that there will likely be enough information from CBO to be able to vote for social safety net bill by next week,” CNN reports.

“Moderates had asked for ‘fiscal information’ from CBO, not full score.”

Sen. Kyrsten Sinema (D-AZ) told the Arizona Republic that “bickering among each other” was the cause of Democrats not doing well during the off-year elections.

Said Sinema: “They just want you to work together and get stuff done… Voters are looking for people who just want to solve problems and get things done and are talking about how to do it in a very practical and pragmatic way that is within the circle of what’s normal.”

And she dismissed a question about a potential primary challenge: “I’m not thinking about 2024. What I am thinking about is the work that I’m doing for Arizona right now.”

Former President Donald Trump put out with a statement ripping Senate Minority Leader Mitch McConnell (R-KY) for supporting the bipartisan infrastructure bill while claiming he could have gotten a $2 trillion dollar infrastructure bill if not for McConnell’s opposition.

It was actually Trump who killed an infrastructure bill in 2019 in order to spite Democrats.

“Former President Donald Trump ripped 13 congressional Republicans who backed a $1.2 trillion infrastructure bill during a lengthy speech Monday – while one of them, New York Rep. Nicole Malliotakis, listened from the audience,” the New York Post reports.

“Malliotakis appeared visibly shaken as Trump railed against her and other Republican House members during the National Republican Congressional Committee dinner.”

Josh Huder calls the movement to punish the 13 House Republicans who voted for the infrastructure bill “legitimately insane. These kinds of punishments are normally reserved for gross misconduct or extreme betrayals of party.”

“Vote for an infrastructure bill? That’s a Tuesday.”

Jonathan Bernstein: “The dynamic that tends to govern these tantrums is simple. Republican radicals are constantly looking for ways to differentiate themselves from the party’s mainstream. They can’t do it on policy because the party is already extremely conservative, so they wind up looking for procedural maneuvers — shutting down the government, for example — even if there’s no point to it.”

“A major IRS enforcement boost will likely be omitted from a forthcoming top-line revenue estimate of Democrats’ tax-and-spend package, complicating the question of whether the legislation will be fully ‘paid for’ as President Joe Biden has promised,” Bloomberg reports.

“The Biden administration estimates a better funded IRS could bring in $400 billion over a decade through more aggressive audits of corporations and the wealthy. But under budget rules set by Congress and the executive branch, the government’s nonpartisan analysts can’t officially count money that will be spent as also increasing revenue when estimating the cost of legislation.”

Washington Post: “The legal battle over the Biden administration’s coronavirus vaccination or testing requirements for private businesses is falling along the country’s sharp political fault lines, with Republican-led states, conservative legal groups and sympathetic employers lining up most forcefully to try to block the rules.”

Pfizer CEO Albert Bourla said that people who spread misinformation on Covid-19 vaccines are “criminals” and have cost “millions of lives,” CNBC reports.

“Joe Biden’s vaccine mandates are one of the most shocking attacks on personal liberty in this country during my lifetime.” — Mississippi Gov. Tate Reeves (R), quoted by the Mississippi Free Press, without mentioning that he presided over the passage of a bill to incarcerate tuberculosis patients who refuse treatment in 2015.

“The Justice Department is asking for the so-called QAnon Shaman, who wore a headdress and posed shirtless on the Senate floor during the siege of the US Capitol, to be sentenced to a prison term of more than four years, the longest incarceration prosecutors have asked for any guilty January 6 defendant so far,” CNN reports.

A New Jersey man who punched a police officer during the January 6 Capitol riot was sentenced to 41 months in prison on Wednesday, CNN reports.  There are roughly 200 more police assault cases from the January 6 riot.

“Kansas Republicans predict they have enough support to call the Legislature into special session later this month to fight COVID-19 vaccine mandates imposed by businesses and the federal government,” the Kansas City Star reports.

A Kansas school district “has removed more than two dozen books from circulation in the district’s school libraries, citing national attention and challenges to the books elsewhere,” KMUW reports.

“The list of books includes several well-known novels, including The Handmaid’s Tale by Margaret Atwood, The Bluest Eye by Toni Morrison, The Hate U Give by Angie Thomas and The Perks of Being a Wallflower by Stephen Chbosky.”

“The Spotsylvania County School Board has directed staff to begin removing books that contain ‘sexually explicit’ material from library shelves,” the Fredricksburg Free Lance-Star reports.  Said one school board member: “I think we should throw those books in a fire.”

Another added that he wants to “see the books before we burn them so we can identify within our community that we are eradicating this bad stuff.”

Mark Barabak on Kamala Harris being in the background: “That’s because a main job requirement is stepping away from the spotlight, except when cheerleading for the president and his agenda.”

“This requires varying degrees of sycophancy. After four years of emasculation, Mike Pence didn’t seem to mind that his boss, President Trump, wasn’t at all upset that some of Trump’s supporters wished to kill Pence for refusing to illegally overturn Biden’s election. Pence, whatever else he accomplishes in life, has managed to set new standards for tolerance and self-abasement.”

“But there were different, heightened expectations for Harris, chiefly because of her groundbreaking election. No one like her — the first woman, first Black person, first Asian American elected vice president — has ever moved through Washington’s uppermost reaches. Her every move would be unprecedented and surely, it seemed, merit special notice and great amounts of news coverage.”

“The South Dakota Legislature for the first time in state history has begun the process of considering the impeachment of a duly elected public official,” the Sioux Falls Argus Leader reports.

Associated Press: “A sizable majority of the Republican-dominated House voted to have a committee prepare a report and recommend whether Attorney General Jason Ravnsborg should be impeached. It could take weeks for the committee of seven Republicans and two Democrats to delve into the crash investigation. The committee is a mix of Ravnsborg’s political allies and those who have called for his ouster.”

“At least 13 senior Trump administration officials illegally mixed governing with campaigning before the 2020 election, intentionally ignoring a law that prohibits merging the two and getting approval to break it,” the Washington Post reports.

But here’s the huge caveat: “No punishment is expected to be assessed because, by most legal interpretations, the president in office at the time is the only person who can take action to fire or reprimand his political appointees when they act illegally.”

“Federal Reserve governor Randal Quarles said Monday he would resign his position around the end of this year,” the Wall Street Journal reports.  “Mr. Quarles’s resignation will open up another seat for President Biden to fill on the central bank’s seven-member board of governors.”

“Federal Reserve Governor Lael Brainard was interviewed for the top job at the U.S. central bank when she visited the White House last week, signaling that Chair Jerome Powell has a serious rival as President Joe Biden considers who will lead the Fed for the next four years,” Bloomberg reports.