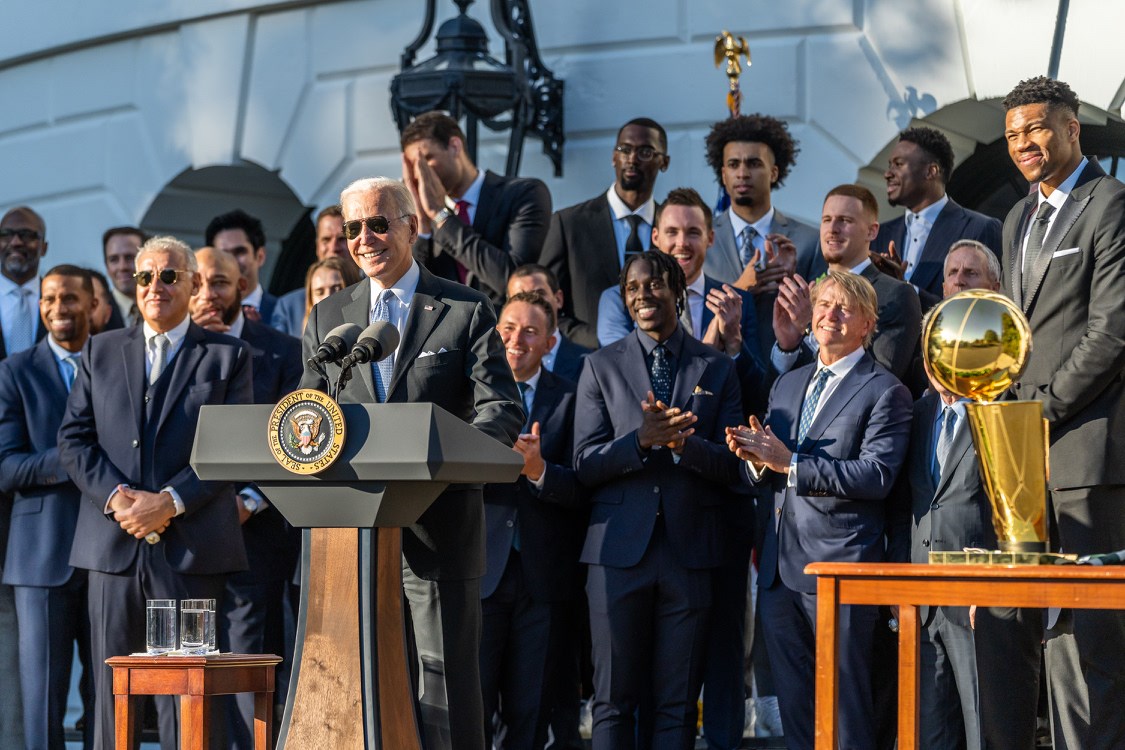 New Hampshire Gov. Chris Sununu (R) announced that he will not run for U.S. Senate against Sen. Maggie Hassan (D) in 2022 and will instead seek re-election, WMUR reports.  Sununu had led Hassan in some early polling.

Josh Marshall: “That is a big, big relief for Democrats who need to hold Sen. Maggie Hassan’s seat to have any hope of holding on to the chamber next year. Hassan isn’t out of the woods. But Sununu is popular and his family has all but monopolized state-wide office in the state for a couple generations. He was their best shot at picking up that seat.”

New Hampshire Gov. Chris Sununu (R) told Politico that he did not give Senate Minority Leader Mith McConnell (R-KY) or Sen. Rick Scott (R-FL) a heads up on his decision not to run for U.S. Senate.

Said Sununu: “I guess you’ll have to let them know. I haven’t talked to them.”

After Gov. Chris Sununu (R) announced he will pass on the U.S. Senate race, WMUR reports that former Sen. Kelly Ayotte (R-NH) “will not run for any office in 2022.”

This is more bad news for Republicans and guarantees a messy GOP primary with Donald Trump trying to be kingmaker.

A new Texas Tribune/University of Texas poll finds just 35% of Texans approve of the way President Biden is handling his job, while 55% disapprove.  Texans equally approved and disapproved of Biden’s job performance for the first four months of this year.

Jonathan Bernstein: “It’s hard to prove anything about such things; there are too many possibilities at play. But it’s certainly suggestive that the pandemic case count bottomed out in the first week of July, so Biden’s slide began right around the time that people started noticing that things were, once again, getting worse. And it continued as economic numbers deteriorated throughout the third quarter.”

“It’s true that the Covid-19 wave peaked in early September, and that case counts have been dropping for about two months now (although they’ve stagnated again). It’s also true, as the data journalist G. Elliott Morris notes, that Biden still gets better marks from voters on his handling of the coronavirus than on most other things. But that doesn’t mean the virus — and its effects on the economy — are not the main cause of Biden’s poor approval. If people have turned pessimistic about the nation and the economy, they are likely to take that out on the president, full stop. Even, paradoxically, if they think it’s not his fault.”

VA State House: While Virginia Republicans currently lead in 52 races for the state House and Democrats in just 48, the final outcome hasn’t been decided yet because two contests where Democrats trail are poised for recounts.

One of those two Democrats, Del. Martha Mugler, in fact conceded on Friday, prompting House Speaker Eileen Filler-Corn to issue a statement congratulating Republicans on their victory. But Mugler, who represents the 91st District in the Hampton Roads area, rescinded her concession over the weekend after a tabulation error cut Republican A.C. Cordoza’s lead almost in half, from 185 votes to just 94.

Just to the south in Virginia Beach, 85th District Rep. Alex Askew is likewise in a very tight race, just 127 votes behind Republican Karen Greenhalgh. Both races are within the 0.5% margin that would trigger an automatic recount paid for by the state. If somehow both elections were to flip, Democrats and Republicans would find themselves with 50 seats apiece in the House, necessitating a power-sharing agreement. Recounts very seldom change electoral outcomes, though the error in Mugler’s race gives Democrats very good reason to pursue a thorough review.

“Lawyers for Pennsylvania Republican Senate candidate Sean Parnell sought Monday to raise doubts about the accusations against him leveled by his estranged wife, focusing during their cross-examination of her on more positive moments between the couple,” the Philadelphia Inquirer reports.

“All eyes are on Sean Parnell when he testifies today for the second and final time in an ugly child custody battle with his estranged wife, Laurie Snell. Though Parnell unequivocally denied abusing his wife and children on the stand Monday, the Republican Senate candidate in Pennsylvania is starting to bleed high-level support,” Playbook reports.

“The swirl surrounding Parnell has been intense: On Friday, Parnell was slated to hold a call with donors to answer questions about the status of his campaign but canceled at the last minute.”

“One adviser to the campaign said they believe Parnell can remain a viable candidate as long as he keeps custody of his children, which the judge in the case will decide in a matter of weeks. A loss in the custody battle would be difficult to withstand politically, the adviser added. The person said Parnell will likely remain in the race until a ruling, even if his campaign is in limbo, and expects to see a bounce for Parnell if it appears that he is vindicated.”

“It used to be, you know, women were attracted to your strength because you could defend them from dinosaurs.” — Pennsylvania U.S. Senate candidate Sean Parnell (R), quoted by the Republican Accountability Project.

“Two strikingly divergent visions of Republican political strength played out over the weekend at a conference of Jewish conservatives, the first major gathering of G.O.P. leaders since the party’s sweeping success in Tuesday’s elections. There were displays of blustery confidence. And there were calls for caution and restraint as party leaders tried to process their drastic gains,” the New York Times reports.

Looming over it all, and mostly addressed gingerly, was the uncertainty about whether Republicans could replicate their decisive gains with suburban voters, especially women, if former President Donald J. Trump remained the face of the party.

“Buffalo Mayor Byron Brown infuriated progressives with his winning write-in campaign last week against the democratic socialist who beat him in the primary,” Politico reports.

“Now prominent left-wing Democrats are calling for the veteran New York mayor’s head, urging Democrats to strip Brown of his position on the Democratic National Committee.”

Associated Press: “Some in the party privately suspected they were in trouble in Virginia’s high-profile governor’s race, which they ultimately lost. But Democrats also suffered embarrassing outcomes in Democratic-leaning suburban New York, Pennsylvania and New Jersey, where they nearly lost the governor’s office and the state Senate president was unseated by a furniture company truck driver who spent $2,300 on his entire campaign.”

“The focus now shifts to the even more consequential midterm election season next year, when control of Congress and dozens more governorships will be decided. Already, high-profile Senate races are taking shape in states like Arizona, Georgia, North Carolina and here in Pennsylvania, where there is reason to believe the political dynamics could be different in November 2022.”

Dan Balz: “Democrats have seen this movie before. An election takes place, they examine the results and suddenly lament their poor showing with rural voters. It has happened time and again and yet the party has neither a solution to the problem nor, it seems, a commitment to solving it.”

Former New Jersey Gov. Chris Christie (R) told Fox News that he would only jump into the GOP presidential primary in 2024 if “I think I can win and I think I can make a difference.”

He also said Republicans need to move on from the 2020 election: “We can no longer talk about the past and the past elections. No matter where you stand on that issue, it’s over.”

Former President Trump hammered former New Jersey Gov. Chris Christie (R) after Christie called on Republicans to move past Trump’s baseless claim that the 2020 election had been stolen from him, The Hill reports.

Said Trump: “Everybody remembers that Chris left New Jersey with a less than 9% approval rating – a record low, and they didn’t want to hear this from him!”

“Florida Republicans have officially reached a milestone they’ve been trending toward for nearly a decade — outnumbering registered Florida Democrats for the first time in state history,” the Tampa Bay Times reports.

David Leonhardt: “This morning, a creative new poll exploring these issues is being released. It asks working-class respondents — defined as people without a bachelor’s degree — to choose between two hypothetical candidates. The candidates are described both personally (their gender, race and job category) and politically (including a sound bite in which they talk about their views).”

“A central conclusion is that infrequent voters are not a huge Democratic constituency just waiting to be inspired by a sufficiently progressive economic message… The poll instead finds that working-class swing voters hold a swirl of progressive and conservative views.”

“Republican-controlled states have been cranking out new congressional maps that spell trouble for Democrats unless courts intervene,” Axios reports.

“Last week’s Virginia and New Jersey results set off alarm bells for the party, but Democrats’ lack of control of the redistricting process in states like North Carolina and Ohio could make Republican wins next year even greater — and longer-lasting.”

“What bothers me about James Carville’s remarks is that he’s glib about the fight for racial equality or full equality for all our citizens. I understand what James is trying to say, but I think it’s just a false equation. But he did win some elections back in the ’90s.”  — Rep. Sean Patrick Maloney (D-NY), quoted by the New York Times, pushing back on Carville’s claim that “stupid wokeness” is to blame for Democratic losses in last week’s elections.

“Glenn Youngkin ran like a teenaged girl in a slasher movie away from Donald Trump. They’re making fun of him on ‘Saturday Night Live’ for how much he tried to run away from Donald Trump.”  — Rep. Sean Patrick Maloney (D-NY), in an interview with the New York Times, explaining that Donald Trump is still “a tremendous liability” for Republicans, even when he’s not on the ballot himself.

New data suggests that politics and hard news have moved to the back burner of the national conversation, with sports — and particularly the NFL — generating more interest, Axios reports.