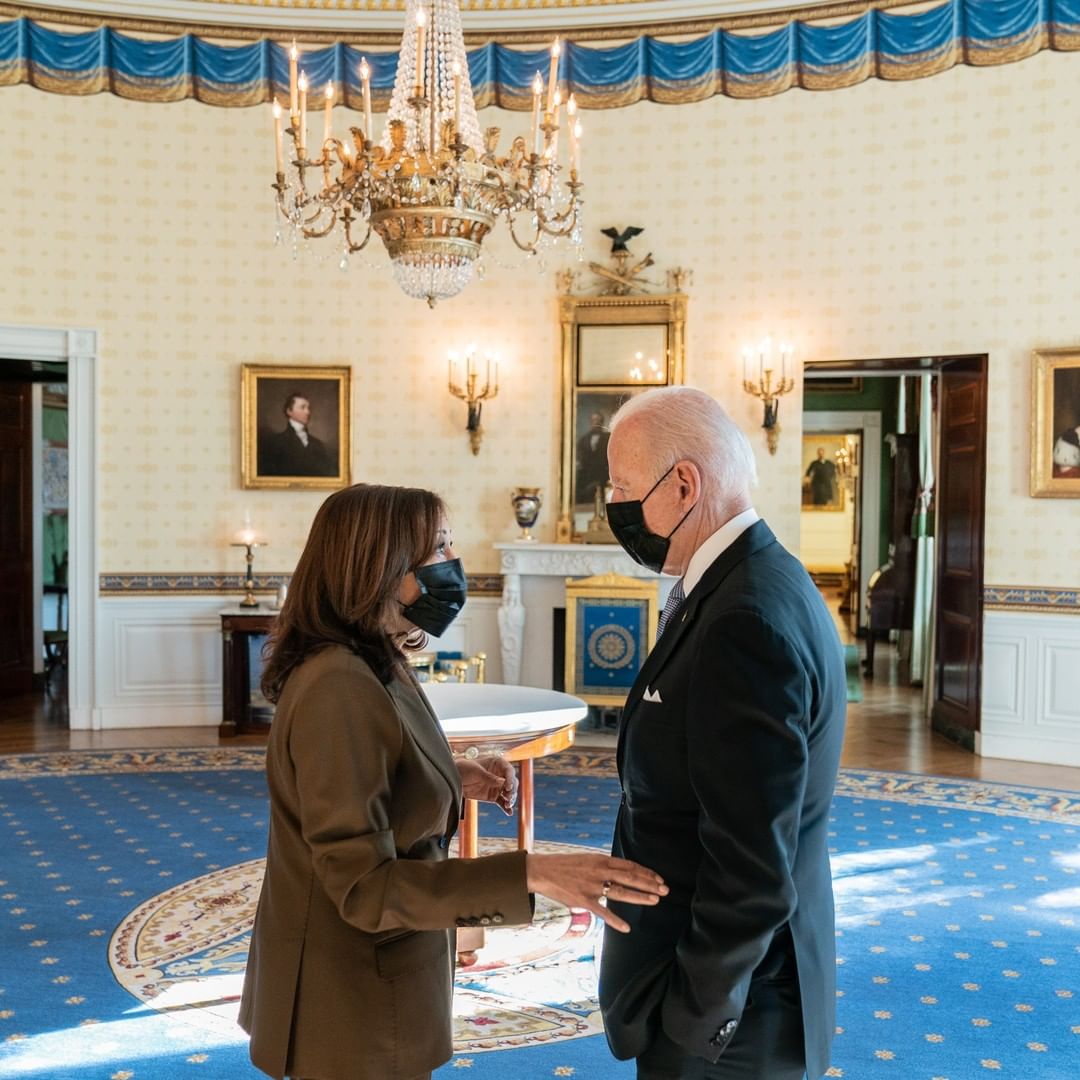 “President Joe Biden and top officials in his Cabinet are hitting the road to promote the $1 trillion infrastructure bill passed in Congress last week, to explain when and where Americans can expect to see some of the funds in their own communities,” Reuters reports.

“White House aides are planning a bipartisan signing ceremony for the infrastructure bill as soon as this week.”

More interesting will be watching the GOP lawmakers who opposed the bill take credit for it.

“President Biden entered office determined to rip to shreds most everything that his predecessor put in place. His advisers kept lists of President Donald Trump’s policies and how they could immediately and methodically undo as many of them as possible, and on his first day in office, he did just that,” the Washington Post reports.

“But there were also subtle areas of overlap, and over the past three months, Biden has demonstrated a willingness, and ability, to carry out some of the policies Trump could not.”

“First, he withdrew from Afghanistan, a chaotic and messy culmination of a two-decades-long war. He has pressed for the paid family leave benefits and prescription drug changes that Trump called for but never managed to implement.“

“And on Saturday, Biden beamed at his biggest legislative accomplishment, one that Trump had chased but never achieved.”

Mike Allen: “I’m told lawmakers are angling for invitations to the infrastructure signing ceremony even before the date has been announced — each making the case for why they were a vital part of closing the deal.”

“Biden wants to sign the bill as soon as possible. But the House is out this week, and Speaker Pelosi was expected to lead a delegation to the climate summit in Scotland.”

Washington Post: “It remains unclear how the public will interpret the infusion of infrastructure spending into their communities, how the second social spending bill will play out — and whether those measures come to define Democrats in the eyes of voters…”

“Liberals say conservatives are holding up the kinds of sweeping change the country needs. Moderates say the party has misread the electorate and risks losing the majority a year from now. And some have come to view members of their own party as a bigger enemy than Republicans.”

Politico: “Nearly every Democrat agrees on two other things: First, if Democrats can pass policies like universal pre-K and expanded family leave, the party’s candidates will have something popular to run on; and second, Biden needs to do a better job selling whatever policies he manages to get passed.”

Former President Trump doubled down on his criticism of Senate Minority Leader Mitch McConnell (R-KY) and other Senate Republicans who voted in favor of passing a $1.2 trillion bipartisan infrastructure bill, The Hill reports.

Said Trump: “All Republicans who voted for Democrat longevity should be ashamed of themselves, in particular Mitch McConnell, for granting a two month stay which allowed the Democrats time to work things out at our Country’s, and the Republican Party’s, expense!”

Washington Post: “McConnell’s vote on impeachment, which infuriated some of his closest backers, made clear his calculus that he couldn’t challenge Trump, even at the former president’s most vulnerable moment, a sign of the MAGA hold on the party electorate and many in McConnell’s own caucus. He opposed a bipartisan Jan. 6 investigation, blocked three bills Democrats put forward to counter restrictive GOP voting laws driven by Trump’s false fraud claims and endorsed a Trump-backed 2022 Senate candidate who echoed the false claim that the election was stolen.”

“To top it all off, McConnell has pledged to vote for Trump if he’s a 2024 nominee.”

“Donald Trump once described Mitch McConnell as his ‘ace in the hole’ and wrote, in a foreword to the Senate Republican leader’s autobiography, that he ‘couldn’t have asked for a better partner’ in Washington,” The Guardian reports.

“Except, according to Trump, he didn’t.”

“Speaking to the Washington Post for a profile of the Senate minority leader published on Monday, Trump said he told McConnell: ‘Why don’t you write it for me and I’ll put it in, Mitch? Because that’s the way life works.’”

The WHO warned that Europe is once again “at the epicenter” of the Covid pandemic, the BBC reports.

“The rate of vaccination has slowed across the continent in recent months. While some 80% of people in Spain are double jabbed, in Germany it is as low as 66% — and far lower in some Eastern European countries. Only 32% of Russians were fully vaccinated by October 2021.”

David Leonhardt: “The gap in Covid’s death toll between red and blue America has grown faster over the past month than at any previous point.”

“In October, 25 out of every 100,000 residents of heavily Trump counties died from Covid, more than three times higher than the rate in heavily Biden counties (7.8 per 100,000). October was the fifth consecutive month that the percentage gap between the death rates in Trump counties and Biden counties widened.”

Sen. Ted Cruz (R-TX) said that Texas should secede if Democrats “fundamentally” destroy the U.S. but added that “he is not ready to give up on America yet,” The Hill reports.

Said Cruz: “We’re not there yet, and if there comes a point where it’s hopeless, then I think we take NASA, we take the military, we take the oil.”

“Tesla CEO Elon Musk faces a tax bill of more than $15 billion in the coming months on stock options, making a sale of his Tesla stock this year likely regardless of the Twitter vote,” CNBC reports.

“Musk asked his 62.7 million Twitter followers over the weekend whether he should sell 10% of his Tesla holdings… No matter the results of the poll, Musk would have likely started selling millions of shares this quarter.”

“The White House on Monday said businesses should move forward with President Joe Biden’s vaccine and testing requirements for private businesses, despite a federal appeals court ordering a temporary halt to the rules,” CNBC reports.

“The House committee investigating the Jan. 6 attack on the Capitol sent a number of subpoenas Monday, including to top 2020 Trump campaign aides and the lawyer responsible for crafting the strategy of how the former president could seek to overturn the election results in Congress,” The Hill reports.

The group named in the latest round of subpoenas are “tied to efforts to overturn the results of the 2020 election.”

“A man who allegedly participated in the Capitol riot Jan. 6 and is wanted by the FBI is now seeking asylum in Belarus, the country’s state media reported Monday, presenting him as a ‘simple American whose shops were burned by Black Lives Matter activists,’” the Washington Post reports.

On October 20, 2020 — just a few weeks before last year’s election — the Claremont Institute and the Texas Public Policy Foundation issued a detailed roadmap for overturning the presidential election, the Bulwark reports.

“As the Supreme Court weighs a ruling on Texas’ new abortion law after Monday’s oral arguments, an unlikely ally is throwing its weight behind the law’s opponents: gun rights advocates worried that Texas may have come up with a way for states to nullify constitutional rights with impunity,” the Dallas Morning News reports.

“Across the world, many countries underreport their greenhouse gas emissions in their reports to the United Nations,” the Washington Post reports.  “An examination of 196 country reports reveals a giant gap between what nations declare their emissions to be versus the greenhouse gases they are sending into the atmosphere.”

“The plan to save the world from the worst of climate change is built on data. But the data the world is relying on is inaccurate.”

“The United States reopened its borders for fully vaccinated travelers from dozens of countries on Monday, ending more than 18 months of restrictions on international travel that left families separated from loved ones and cost the global travel industry hundreds of billions of dollars in tourism revenue,” the New York Times reports.