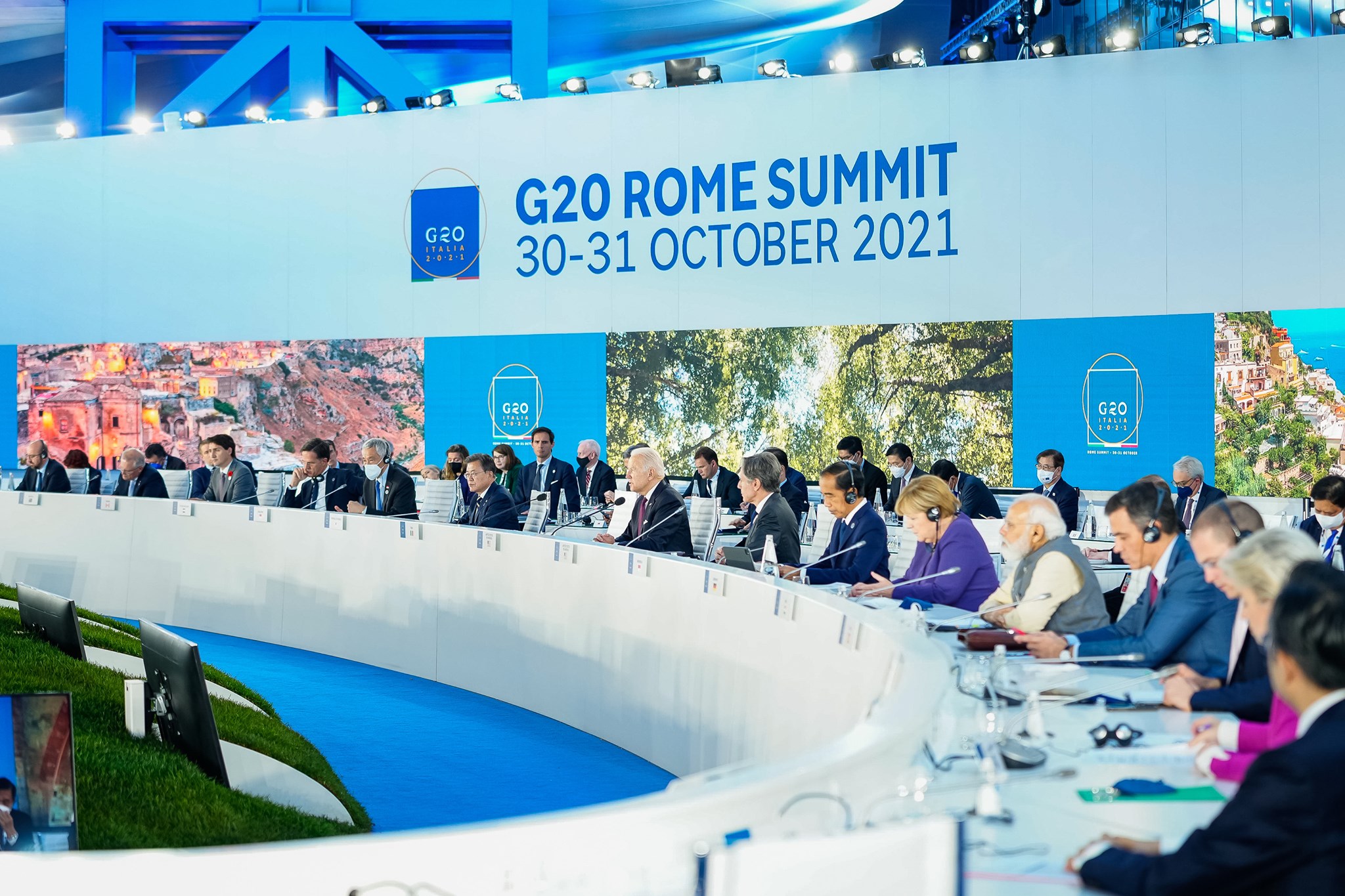 Key finding: “More than a third of Americans call the economy the most pressing problem facing the country (36%). Among the group that sees it that way, 72% say Biden hasn’t been attentive to the right issues. That dynamic is reversed among the smaller 20% who consider the coronavirus pandemic the nation’s top problem: 79% in that subset say Biden has had the right priorities, while 21% not.”

A new NBC News poll found President Biden’s approval rate at 42%, but that number differed wildly depending on which social network you use.

For those who did not use a social network it was 40%.

“New Jersey Democrats are calling on Republican gubernatorial nominee Jack Ciattarelli to concede last week’s election, saying that his silence since the race was called for Gov. Phil Murphy (D) is ‘an assault on the integrity of our elections,’” the Washington Post reports.

“As of Monday morning, Murphy led the Republican by roughly 2.6 percentage points, larger than the margin Virginia Gov.-elect Glenn Youngkin (R) won by last week. Democratic nominee Terry McAuliffe conceded that race on Nov. 3, the morning after the election, and Youngkin soon began the transition process by meeting with the state’s Democratic Gov. Ralph Northam.”

Jonathan Last: “Over the next 12 months it will be interesting to track what percentage of losing Republican candidates concede their losses and wish their opponents well.”

New York Times: “In the jigsaw puzzle that is electoral politics, Democrats have often focused their energy on swingy suburbs and voter-rich cities, content to mostly ignore many white, rural communities that lean conservative. The belief was, in part, that the party had already bottomed out there, especially during the Trump era, when Republicans had run up the numbers of white voters in rural areas to dizzying new heights.”

“Virginia, however, is proof: It can get worse…”

“Republicans have never had a demographic stronghold as reliable as Black voters have been for Democrats, a group that delivers as many as nine out of 10 votes for the party. But some Democratic leaders are now sounding the alarm: What if rural, white voters — of which there are many — start voting that reliably Republican?”

“The National Republican Congressional Committee will run a one-day, nation-wide ad campaign today — one year out from the 2022 midterm elections, targeting Democrats over rising prices, crime and the border,” Axios reports.

“The ad will air Monday on Fox News, Newsmax and One America News Network.”

A new USA Today/Suffolk poll finds 46% of Americans would now choose a generic Republican candidate for Congress compared to 38% for a Democrat.

“Former President Donald Trump is set to rally House Republicans at a Florida fundraiser on Monday as the GOP turns its gaze from the off-year elections in Virginia, New Jersey and other states to its goal of recapturing control of Congress in 2022,” The Hill reports.

“Republicans could hardly be better poised to recapture the House majority,” Politico reports.

“Increasingly aggressive redistricting, a diverse slate of candidates raking in record-breaking amounts of cash and a political atmosphere that just keeps getting more favorable has Democrats watching with a growing sense of dread.”

Seattle elected its first Republican to city office since at least 1991 as Ann Davison (R) defeated defeated Nicole Thomas-Kennedy (D), a progressive in favor of “abolishing” the police, in the race for city attorney, the Seattle Post-Intelligencer reports.

TEXAS THIRTY-SEVENTH CD. Democratic state Rep. Gina Hinojosa, who hadn’t ruled out a bid for Texas’ new 37th District, says she’ll run for re-election to the legislature instead. So far, the only person running for this safely blue seat in Austin is Democratic Rep. Lloyd Doggett, who currently represents the 35th.

TEXAS THIRTY-FIFTH CD. Austin City Councilman Greg Casar announced on Thursday that he’ll run in the Democratic primary for Texas’ 35th Congressional District, an extremely gerrymandered seat that gathers in as many Democratic voters as possible by linking Austin and San Antonio via a thin rail that runs along Interstate 35. Casar is the first Democrat to kick off a campaign, but several other notable candidates are eyeing the race. The 35th is open because Democratic Rep. Lloyd Doggett, who represents its current iteration, recently said he’d run in the new Austin-based 37th District, which Republicans created to serve as a Democratic vote-sink.

TX-35: Democratic state Rep. Eddie Rodriguez, who’s been considering a bid for Texas’ open (and safely blue) 35th Congressional District, has now filed paperwork with the FEC, though he has yet to announce a campaign.

MONTANA SECOND CD. Former state Rep. Tom Winter, who’d reportedly been considering a bid, said this week that he’ll run for Montana’s new 2nd Congressional District. Last year, Winter campaigned for what was then the state’s lone, at-large House seat but was defeated in the primary by 2018 nominee Kathleen Williams in a 89-11 landslide. The contours of Montana’s congressional map have yet to be finalized, but both Democrats and Republicans on the state’s bipartisan redistricting commission have proposed lines that would divide the state into an eastern district and a western one. The commission must decide on a final map by Nov. 14.

OHIO FIRST CD. Former healthcare executive Kate Schroder, who was the Democrats’ nominee against Republican Rep. Steve Chabot last year, has announced that she won’t seek a rematch. Schroder ran a competitive campaign but lost to Chabot 52-45 in Ohio’s badly gerrymandered 1st District, which voted for Donald Trump 51-48. Republicans are likely to try to shore up Chabot further in redistricting (see our separate OH Redistricting item above).

MICHIGAN THIRD CD. Conservative commentator John Gibbs, whose nomination to head the Office of Personnel Management under Donald Trump failed because of his conspiratorial ravings, has filed paperwork ahead of a possible primary challenge to Rep. Peter Meijer, one of 10 House Republicans who voted to impeach Trump earlier this year. Among other things, Gibbs repeatedly amplified the batshit conspiracy theory that Hillary Clinton’s 2016 campaign chair, John Podesta, had partaken in some sort of satanic ritual, based on personal emails stolen by Russian hackers. Trump named Gibbs to run the OPM in 2020, but the Senate never acted on the nomination.

Meijer already faces intra-party opposition from Army National Guard veteran Tom Norton, who ran for the GOP nomination last year, and so-called “MAGA bride” Audra Johnson (quite the cast of characters, huh?). It takes only a simple plurality to win a primary in Michigan, so Meijer might benefit from a split field.

COLORADO EIGHTH CD. Weld County Commissioner Lori Saine, who made a name for herself as one of the Colorado GOP’s most extreme members during her eight years in the state House, just became the first notable Republican to enter the race for the state’s new 8th Congressional District, a swingy seat in the Denver suburbs. A somewhat less incendiary Republican, state Sen. Barbara Kirkmeyer, also says she’s considering a bid and last month promised an announcement “soon” after the state Supreme Court gave its approval to Colorado’s new districts (it did so earlier this week).