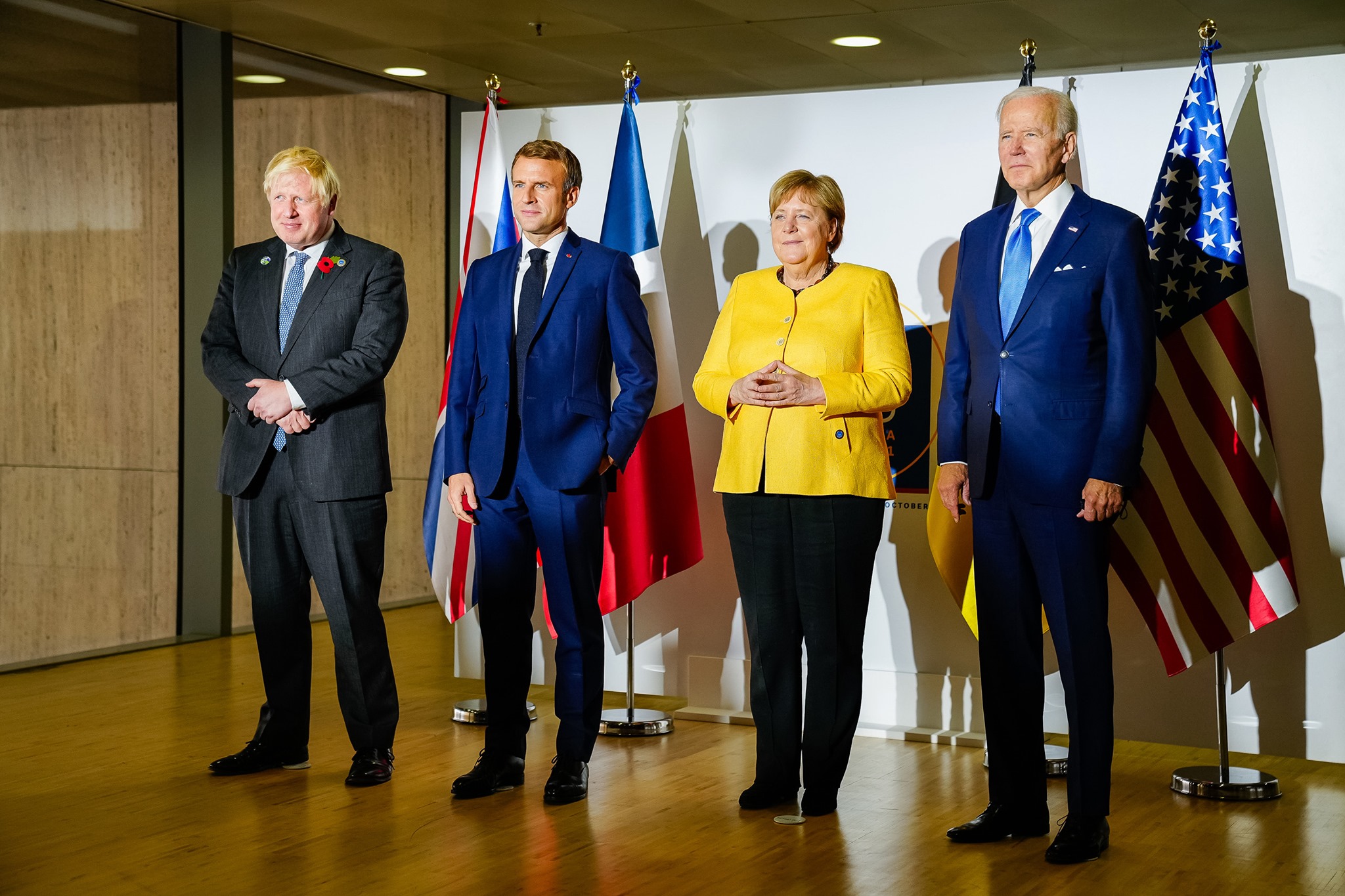 The House of Representatives passed the $1.2 trillion bipartisan infrastructure bill, 228 to 206. The bill, which passed the Senate in August, will now go to President Biden for his signature. It is a major legislative accomplishment for Speaker Nancy Pelosi and the Biden administration.

Multiple sources tell CNN that progressives and moderate Democrats reached a deal to have a vote tonight on infrastructure in exchange for more concrete commitments from moderates on the Build Back Better bill, which would be voted on in 10 days.

A GOP House member tell The Hill that between 10 and 15 House Republicans are expected to vote for the infrastructure bill.

That’s a huge win for Democrats. When added to the pandemic relief package earlier this year, Democrats will have secured $3.1 trillion in new domestic spending in Biden’s first 10 months as president. Even for Washington, that’s an enormous amount of money.

But as Punchbowl News pointed out Friday, “It’s only the end of the opening act — a long and often quite tedious opening scene — in a multi-act drama to pass Biden’s legislative agenda.”

Democrats will then see if Sen. Joe Manchin (D-WV) — who has wielded his power to slow everything down — will allow them to pass a massive social spending bill before the end of the year.

The good news for Democrats is that Manchin has publicly agreed to a $1.75 trillion top line number. But the details of that bill — even after months of negotiating — are still very much in flux.

Rep. Pramila Jayapal (D-WA) said that it’s worth Democrats passing the party’s sweeping social spending and climate change package even if they lose the House in next year’s midterm elections, The Hill reports.

Said Jayapal: “What’s the alternative? To do nothing. I mean, that’s not gonna that’s not gonna get us anywhere… part of what we have to do is really understand the economic frustration that people have right now. And I think that is really important for us.”

“The whole day was a clusterfuck, right? But beyond that, you know… I thought everyone was working in a very congenial way. I mean, rank-and-file members figured out how to get shit done.”

— Rep. Mark Pocan (D-WI), quoted by The Hill, after a fruitful closed-door meeting between Democratic progressives and moderates.

— Speaker Nancy Pelosi to Republicans, in response to snickers over her suggestion the budget reconciliation bill will cut the debt.

The U.S. economy added 531,000 jobs in October, a strong number that indicates a growing recovery as coronavirus cases declined across the country, the Washington Post reports.

The unemployment rate dropped slightly to 4.6 percent from 4.8 percent.

The Economist: “Most office workers remain steadfastly ‘remote-first,’ spending most of their paid time out of the office. Even though a large share of people have little choice but to physically go to work, 40% of all American working hours are still now spent at home.”

“Dow is over 36,000. Unemployment has dropped from 6.3% in Jan. to 4.8%. Over 5 million jobs added, a record. 220 million vaccines in 10 months. And only 30% of country think US is on right track. The Democratic Party has a huge messaging problem.”  — Former GOP strategist Stuart Stevens, on Twitter.

“The Justice Department searched two locations associated with the conservative group Project Veritas as part of an investigation into how a diary stolen from President Biden’s daughter, Ashley, came to be publicly disclosed a week and a half before the 2020 presidential election,” the New York Times reports.

“Federal agents in New York conducted the court-ordered searches on Thursday — one in New York City and one in suburban Westchester County — at places linked to people who had worked with the group and its leader, James O’Keefe.”

“The investigation is being handled by FBI agents and federal prosecutors in Manhattan who work on public corruption matters.”

“Allies of former President Donald Trump testified under oath that they had done little to verify debunked claims of fraud in the 2020 election before spreading them on the national stage,” according to tapes of their depositions obtained by CNN.

In newly aired deposition videos obtained by CNN, Rudy Giuliani and pro-Trump lawyer Sidney Powell admitted under oath that they hadn’t bothered to check if their conspiracy theories about the 2020 election and voting tech companies were true when they repeatedly regurgitated them in public.

Giuliani was just too darn busy to look into it all, he told the lawyer of a former Dominion Voting Systems executive suing him and Powell for defamation.

It’s also not Giuliani’s job to make sure his claims were based on fact, he argued. “Otherwise, you’re never going to write a story.”

Powell argued the truth wasn’t really important, claiming that it “didn’t seem to be the material part of the inquiry.”

“The White House is asking Democratic senators to meet with Federal Reserve chair Jerome Powell before Thanksgiving — leading some to believe President Biden will renominate him this month,” Axios reports.

“The people said Mr. Biden hasn’t yet made a final decision on whom he will tap to lead the central bank, but he is expected to decide soon.”

“The Justice Department on Thursday sued Texas over the state’s new voting law, arguing that the Republican-passed measure would disenfranchise Texans who do not speak English, who have disabilities, who are older or who live outside the United States,” the New York Times reports.

“Democrats are ramping up their discussions about changing the Senate’s rules amid growing frustration about the inability to move voting rights legislation,” The Hill reports.

“After months of trying to give space for bipartisan discussions on election legislation, Democrats are planning internal talks about what, if any, rules changes they’ll be able to get through on their own. Those ideas include smaller shifts on nominations or amendments. But altering the filibuster — particularly when it comes to elections bills — is getting the most attention.”

Said Greene: “I have never seen human suffering like I witnessed last night.”

“Congressional investigators probing the Jan. 6 attack on the Capitol are examining the contacts between one of the rioters who breached the Capitol and state-level GOP officials who worked with former President Donald Trump as he attempted to overturn the 2020 election,” Politico reports.

“The rioter, who interviewed with the committee twice in the past week, described knowledge of contacts between GOP officials in a key state Trump lost and allies of the former president in the weeks leading up to the Jan. 6 attack.”

“The Manhattan District Attorney has convened a second long-term grand jury to hear evidence about the Trump Organization’s financial practices, and potentially to vote on criminal charges,” the Washington Post reports.

“An earlier grand jury — convened this spring in Manhattan — previously handed down felony indictments against two Trump companies and Trump’s longtime chief financial officer Allen Weisselberg, charging them with tax evasion. It is unclear if that grand jury is still hearing evidence about the Trump Organization.”

“Attorneys general in 11 states are suing the Biden administration to try to stop new rules that require employers with more than 100 workers to ensure their employees are vaccinated against Covid-19 or get a weekly test,” the Wall Street Journal reports.

New York Times: “Now, nearly 10 months into his presidency, some of Mr. Biden’s most loyal contributors and top fund-raisers are feeling neglected if not outright cast aside, according to more than 30 interviews with Democratic donors, fund-raisers and the operatives who work with them. With the loss of the Virginia governorship this week making plain the darkening political climate for Democrats, the White House has accumulated precious little good will among some of the party’s most important financiers.”

“Their frustrations also include impatience with the pace of substantive policy changes: One of the party’s top donors is now signaling he is planning to withhold funds entirely over the languishing of voting-rights legislation.”

“A new drug being developed by Pfizer offers the possibility of nearly putting an end to deaths from Covid-19,” USA Today reports.

“When given within five days of the onset of symptoms, the antiviral therapy called Paxlovid, prevented almost 90% of deaths from Covid-19 compared to a placebo, a Pfizer study found.”

Said Manchin: “You want to know what’s wrong with the place? I go to work in a hostile working environment every day. If you’re a Democrat, and a Republican is up for election, you’re supposed to be against that person.”

He added: “If Donald Duck’s running against that person, you’re supposed to get money from your PAC to help the other person beat the person that you’ve been working with. And even sometimes they’ll say, ‘can you come campaign against so and so?’ And then we come back on Monday, and here’s a person that we’ve given money against.”

Poor baby. Maybe if he wasn’t such a glory hog asshole.

In mid-December last year, the Trump campaign made more than $225,000 in campaign payments to firms owned by Bernard Kerik and Rudy Giuliani — “including more than $50,000 for rooms and suites at the posh Willard hotel in Washington that served as a ‘command center’ for efforts to deny Biden the presidency in the days leading up to the attack on the Capitol on Jan. 6,” the Washington Post reports.

“The fact that campaign funds were used to finance efforts to subvert Biden’s victory could complicate the former president’s ongoing attempt to use claims of executive privilege to shield documents and testimony from the congressional committee investigating Jan. 6, according to some legal scholars.”

“The Federal Reserve will announce at its meeting this week a scaling back of its enormous pandemic-related stimulus program amid uncertainty over persistent inflationary pressures and whether the US central bank will need to raise interest rates sooner than expected,” the Financial Times reports.

Rep. Madison Cawthorn (R-NC) warned on OAN that Democrats were trying to make the country “genderless” and “sexless.”

Said Cawthorn: “When I see the people that are in Washington, DC who are trying to insert their woke politics into our culture, trying to destroy western civilization, trying to take all of our morality away from everyone, trying to make everyone genderless, sexless, and Godless.”

He the issued a threat: “We want our country back, we want our culture back, and if you want to stand in the way that, we will run you over.”