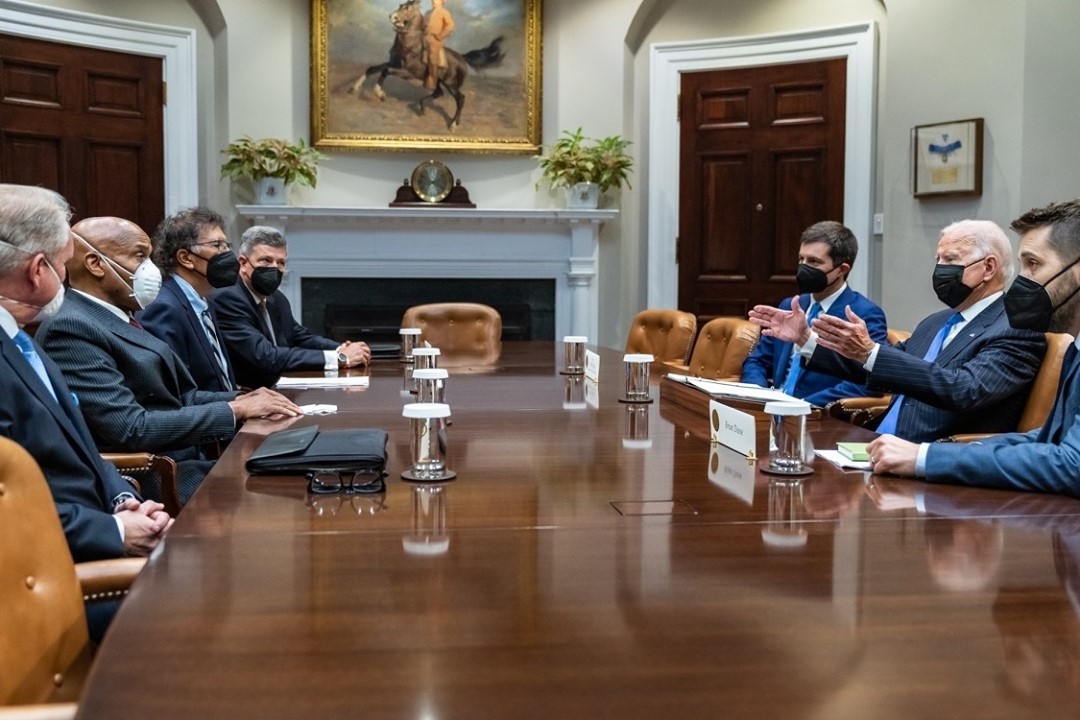 “Speaker Nancy Pelosi is slamming her foot on the gas pedal, looking to pass both the Build Back Better Act and the $1 trillion bipartisan infrastructure bill this week,” Punchbowl News reports. “In doing so, Pelosi is asking her House Democratic Caucus to vote for a bill with an uncertain future in order to jumpstart the long-delayed reconciliation process.”

“She’s also attempting to brush aside a whole host of concerns from within the caucus.”

“House Speaker Nancy Pelosi said in a closed-door meeting with Democrats that her plan is to hold a vote on President Joe Biden’s economic agenda bill Thursday night, and then hold a vote on the bipartisan infrastructure bill Friday morning,” CNN reports.

“Democrats announced Wednesday that they would plow straight ahead on President Biden’s roughly $3 trillion agenda, arguing that the political trouncing their party suffered Tuesday across the nation mandated action,” the Washington Post reports.

“It was a predictable reaction, exactly in line with other recent congressional majorities after shellackings in Virginia and New Jersey’s oddly timed state elections. If history is any guide, Democrats will pass this massive agenda in the weeks or months ahead — and it will have little to no impact on their political standing in next year’s midterm elections.”

Playbook: “For now, the GOP sweep in Virginia and Dems’ razor-thin victory in New Jersey seem to have done what months of negotiations on the Hill could not: force moderates and progressives into line on passing both bills.”

“There’s a sense among Dems that if they just stop the bickering and get something done, they might be able to reverse what looks to be a devastating trajectory for the party heading into the midterms. Underscoring this feeling, Congressional Progressive Caucus Chair Pramila Jayapal (D-WA) retweeted moderate leader Josh Gottheimer (D-N.J.) saying that the message from the election was ‘loud and clear’: Democrats need to pass both bills ASAP. Not a pairing we see every day.”

New York Times: “Virtually all Democrats came away from the sweeping defeats in Virginia and a narrow escape for New Jersey’s Democratic governor, Philip D. Murphy, agreeing that the imperative now was to pass both bills as quickly as possible to prove their party could govern.”

“President Joe Biden said Wednesday the Democrats’ setbacks in Tuesday’s elections underscore that the party needs to ‘produce for the American people,’ but he pushed back against the notion that the off-year election results were a repudiation of his presidency,” the AP reports.

“Biden suggested that his inability to get Congress to pass a $1 trillion infrastructure deal and a $1.75 trillion package of social and climate programs ahead of the voting didn’t make a difference.”

“After months of strenuously stating he wouldn’t budge from a $1.5 trillion maximum price tag for Democrats’ climate and safety net plan, Sen. Joe Manchin (D-WV) acknowledged he had, in fact, agreed to a $1.75 trillion figure during an appearance on MSNBC,” Politico reports.

Politico: “As Speaker Nancy Pelosi furiously worked to unite her caucus around a centerpiece of the party’s domestic agenda, Manchin is making it clear that he’s not paying much attention to what the House is crafting, memorably saying Wednesday that he has ‘no idea’ what they are doing.”

“So even as the House tries to include provisions like paid leave and immigration reform, the West Virginia Democrat is operating on the presumption that the House can do what it wants, and then he will too. Manchin opposes including paid leave in the bill, and the Senate’s nonpartisan rules referee may scrap immigration reform before he has a chance to raise a concern.”

“While Texas’ law bans abortions performed at least six weeks into a pregnancy, HB480 would prohibit any abortions from being performed in the state. HB480 also includes no exceptions for rape or incest.”

“Since he burst onto the national political scene in 2015, Donald Trump has strong-armed one Republican after another into submission. But in Virginia, Glenn Youngkin did something new: He managed to keep the former president at a politically safe remove without alienating him or his allies,” the New York Times reports.

“Mr. Youngkin’s success in the Virginia governor’s race speaks not only to his own deft handling of his party’s volatile and unpredictable standard-bearer but also to Mr. Trump’s apparent willingness to place himself on the sidelines during a campaign that received wall-to-wall coverage on cable news.”

“What is not known is whether Mr. Youngkin’s formula is repeatable elsewhere, particularly in the 2022 midterm elections.”

Washington Post: Youngkin became Virginia governor by wooing both moderates and Trump supporters. So how Trumpy is he?

“The danger to Trump’s standing in the GOP isn’t that he’ll be flatly repudiated or ever stop being popular, rather that he’s no longer viewed as central or essential as he has been over the last five years.”

“Worried that he’s not getting enough credit for Virginia, Trump said on Wednesday that there’s no way Youngkin would have won without MAGA voters. True enough. Youngkin needed to get them out and did, without Trump campaigning for him and barely mentioning his name. Therein lies a tale.”

“This is 2009 all over again. The only benefit they have now over 2009 is knowing just how bad it can get.” — Former Rep. Steve Israel (D-NY), quoted by Politico, comparing the political environment to when Democrats lost more than 60 House seats in 2010.

“This was an electroshock therapy for Democrats to stop infighting and start delivering results for a very impatient electorate. In the war between Democratic progressives and Democratic moderates, the Republicans won.” — Former Rep. Steve Israel (D-NY), quoted by the Wall Street Journal.

Said Carville: “What went wrong is just stupid wokeness. Don’t just look at Virginia and New Jersey. Look at Long Island, look at Buffalo, look at Minneapolis, even look at Seattle, Wash. I mean, this ‘defund the police’ lunacy, this take Abraham Lincoln’s name off of schools. I mean that — people see that.”

He added: “It’s just really — has a suppressive effect all across the country on Democrats. Some of these people need to go to a ‘woke’ detox center or something. They’re expressing a language that people just don’t use, and there’s backlash and a frustration at that.”

“After an unexpectedly strong showing on Tuesday night, Republicans are heading into the 2022 midterm elections with what they believe will be a highly effective political strategy capitalizing on the frustrations of suburban parents still reeling from the devastating fallout of pandemic-era schooling,” the New York Times reports.

“Seizing on education as a newly potent wedge issue, Republicans have moved to galvanize crucial groups of voters around what the party calls “parental rights” issues in public schools, a hodgepodge of conservative causes ranging from eradicating mask mandates to demanding changes to the way children are taught about racism.”

“Yet it is the free-floating sense of rage from parents, many of whom felt abandoned by the government during the worst months of the pandemic, that arose from the off-year elections as one of the most powerful drivers for Republican candidates.”

“Many employers will have to ensure by Jan. 4 that their workers are vaccinated or tested weekly for Covid-19 under a set of new vaccine requirements by the Biden administration that will cover more than 80 million employees,” the Wall Street Journal reports.

Merkley hinted at Emanuel’s shoddy civil rights record as the reason for his “no” vote.

But Emanuel’s nomination isn’t dead thanks to the public support of a handful of Republican senators.

“A federal judge on Thursday skewered former President Donald Trump’s attempt to block the National Archives from complying with the Jan. 6 Committee to Investigate the Attack on the U.S. Capitol by claiming the subpoenas lacked a legislative purpose,” Law & Crime reports.

Rep. Liz Cheney (R-WI) told Politico that the Jan. 6 select committee has quietly interviewed more than 150 people as it tries to piece together the details of the Capitol siege.

Said Cheney: “We’ve had, actually, over 150 interviews with a whole range of people connected to the events, connected to understanding what happens, so that just gives you a sense. It is a range of engagements — some formal interviews, some depositions… There really is a huge amount of work underway that is leading to real progress for us.”

Jenna Ryan, who tweeted that she’s “definitely not going to jail” after she stormed the Capitol on Jan. 6, was sentenced to 60 days in prison on Thursday, the HuffPost reports.

Smartmatic, the voting tech company at the center of Trumpland’s 2020 election fraud conspiracy theories, is now suing both OAN and Newsmax, two pro-Trump media outlets that gleefully trafficked in those conspiracy theories as the ex-president tried to steal the election.

Smartmatic is accusing the outlets of deliberately spreading misinformation about the company in pursuit of pro-Trump viewers who’d given up on Fox News (after all, Trump whined repeatedly how Fox wasn’t sufficiently sucking up to him during the election).

OAN was sued in federal court in Washington, D.C.; and Newsmax was sued in Delaware state court.

Newsmax claims the lawsuit is a “clear attempt to squelch the rights of a free press.”

New York Times: “The arrest of the analyst, Igor Danchenko, is part of the special counsel inquiry led by John Durham, who was appointed by the Trump administration to scrutinize the Russia investigation for any wrongdoing.”

“Mr. Danchenko, was the primary researcher of the so-called Steele dossier, a compendium of rumors and unproven assertions suggesting that Mr. Trump and his 2016 campaign were compromised by and conspiring with Russian intelligence officials in Moscow’s covert operation to help him defeat Hillary Clinton.”

“Another rural, conservative county in Oregon has expressed interest in becoming part of Idaho,” the Seattle Times reports.

“Harney became the eighth of Oregon’s 36 counties to vote for considering adjusting Oregon’s border to put much of rural eastern and southern Oregon in Idaho.”

Yeah, it will never happen, because you need both states to agree to it and then you need Congress and the President to sign off. Not happening.

“North Korea has the capacity to make more base ingredients for nuclear bombs than previously believed, according to new research, suggesting the Kim Jong Un regime possesses the potential to accelerate the earliest stages of production,” the Wall Street Journal reports.

“President Biden said the U.S. wasn’t going to pay immigrant families who were separated at the Mexico border during the Trump administration, throwing into doubt settlements the Justice Department has been negotiating to resolve legal claims by the families,” the Wall Street Journal reports.

“Six months after signing what he called the strongest election security bill in the nation, Gov. Ron DeSantis on Wednesday said he wanted to beef up the state’s voting laws and create a new office to investigate and prosecute election-related fraud,” the Tampa Bay Times reports.

The move comes after Roger Stone threatened to challenge DeSantis in the 2022 election as a Libertarian.

“Richard Barron, who oversees elections in Georgia’s biggest Democratic county, is announcing his resignation Wednesday — following a tumultuous year that has included death threats against him and his staff and the potential takeover of election operations in the county by state officials,” CNN reports.