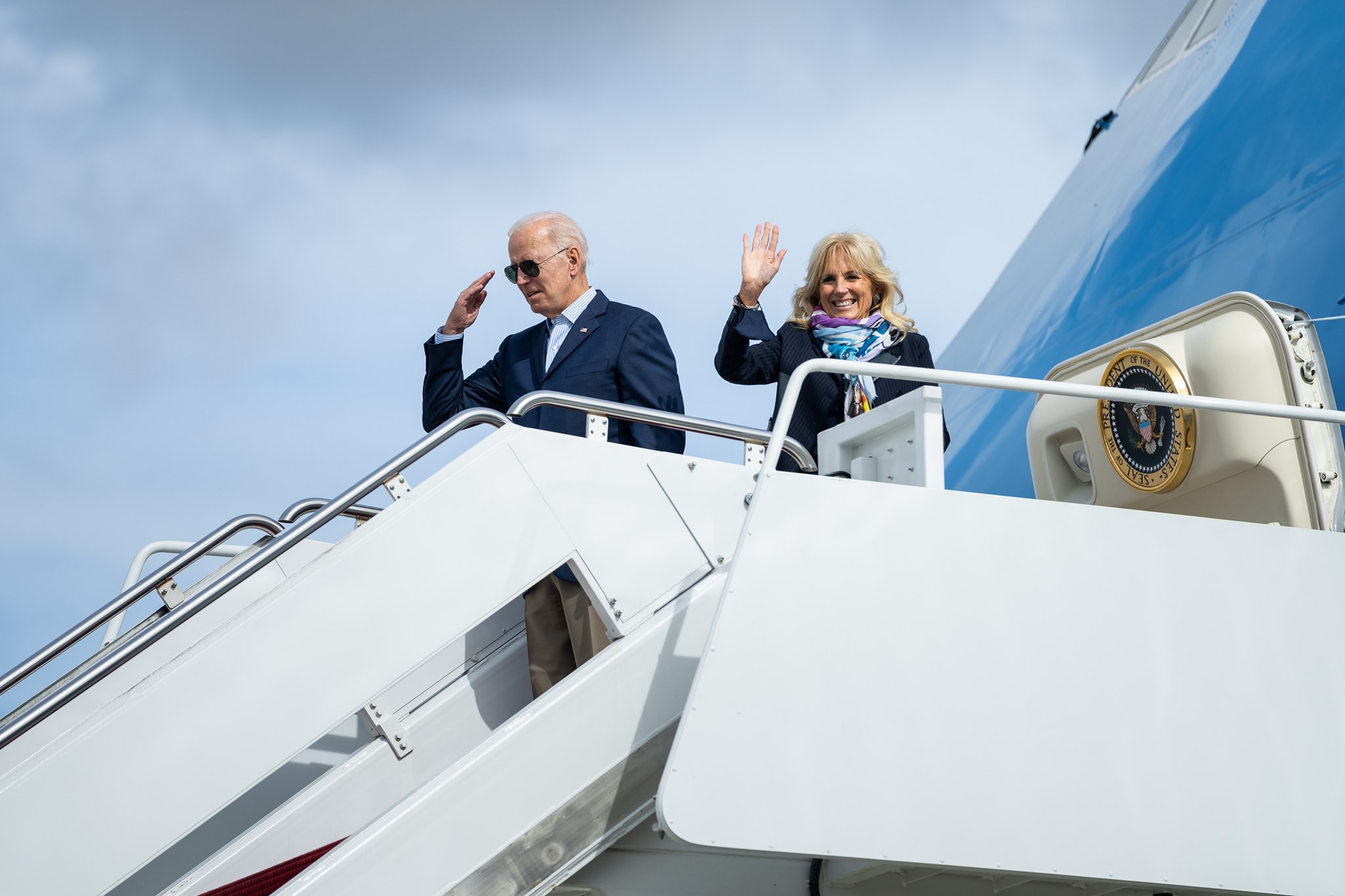 Based on last night’s election results, Larry Sabato’s Crystal Ball shifts the ratings of four 2022 Senate races towards the Republicans.

“The National Republican Congressional Campaign Committee expanded its offensive target list on Wednesday morning following Democrat Terry McAuliffe’s loss in Virginia’s gubernatorial contest and a must closer-than-expected race in New Jersey that was too close to call,” The Hill reports.

Said NRCC Chairman Tom Emmer (R-MN): “In a cycle like this, no Democrat is safe.”

Trip Gabriel: “Yesterday’s results were foreshadowed a year ago, when suburbanites’ rebuke of Trump did not translate downballot, and Democrats lost House seats and suffered crushing losses in legislative races. None of the Democrats targeted chambers flipped even though Biden won many of the swing districts.”

New Jersey Senate President Steve Sweeney (D), “the longest-serving legislative leader in New Jersey history, is on the verge of losing his own State Senate seat in what could be a stunning political upset,” the New Jersey Globe reports.

TX-15: Attorney Roberto Haddad, who works as a lobbyist for DHR Health, has filed FEC paperwork for a potential Democratic primary campaign for this open seat.

IA-01: Democrat Rita Hart said this week that she would not run for the new 1st District, which contains most of the current 2nd District she unsuccessfully sought last year. She instead endorsed state Rep. Christina Bohannan’s campaign against freshman Rep. Mariannette Miller-Meeks, the Republican who beat Hart by six votes.

CA-37: State Sen. Sydney Kamlager told the Los Angeles Times she was interested in running to succeed Rep. Karen Bass, a fellow Democrat who is leaving Congress to campaign for mayor of Los Angeles, but it remains to be seen if she’d have an open seat to run for. Last week, the state’s independent redistricting commission released a draft set of maps that would essentially eliminate Bass’ district by giving Democratic Rep. Maxine Waters much of her constituency.

TX-34, TX-AG: Democrat Rochelle Garza, a former attorney for the ACLU, said on Monday that she’s abandoning her bid for Congress to instead run for state attorney general next year. Garza had entered the race for Texas’ 34th Congressional District after Democratic Rep. Filemon Vela decided to retire earlier this year, but after Republicans passed their new gerrymandered congressional map, Rep. Vicente Gonzalez announced that he’d seek re-election in the redrawn 34th rather than in the 15th District, which he currently represents.

VA-07: Far-right state Sen. Amanda Chase has filed FEC paperwork for a potential campaign against Democratic Rep. Abigail Spanberger next year, though she has not yet announced a bid. What Chase has done, though, is spread conspiracy theories about Tuesday’s race for governor by baselessly accusing Democrats of “cheating.”

TX-15: Nonprofit official Eliza Alvarado announced in late October that she would seek the Democratic nod for the redrawn 15th District, a Rio Grande Valley seat that supported Donald Trump 51-48 last year. Other contenders may end up running now that Rep. Vicente Gonzalez has confirmed that he’ll run in the more secure 34th District rather than defend this constituency, but they don’t have too much time to decide: The Texas Tribune notes that the Texas secretary of state’s office has confirmed that the candidate filing deadline will be Dec. 13, which is one of the earliest in the nation.

OR-06: Amy Ryan Courser, who was the Republican nominee last year in the current 5th Congressional District, has announced that she’ll run in the new 6th District.

Courser, a former Keizer city councilor who raised all of $232,000 last time, attracted no serious outside help in her 2020 campaign against Democratic Rep. Kurt Schrader, but she held the incumbent to a surprisingly modest 52-45 victory as Joe Biden was prevailing by a larger 54-44 spread; since then, Courser has spent her time spreading conspiracy theories about the presidential election. Schrader himself has yet to announce if he’ll run in the new 5th or 6th District.

OR-05, OR-06: Democratic Rep. Kurt Schrader said Thursday that he had yet to decide whether he’d run for the new 5th or 6th District but would be announcing his plans in the next few weeks. Meanwhile, Democratic state Rep. Andrea Salinas also said she’d make up her mind in the coming weeks whether she’d campaign for the 6th District.

TX-28: Businessman Ed Cabrera recently announced that he would seek the Republican nomination to take on conservative Democratic Rep. Henry Cuellar. The new 28th District, according to data from Dave’s Redistricting App, backed Joe Biden 53-46, compared to 52-47 under the current map.

RI-Gov: Campaign finance reports are out for the third quarter of 2021, and we’ve collected the numbers for the Democratic contenders below:

Another Democrat, former CVS executive Helena Foulkes, entered the race in October after the start of the new quarter.

“Byron Brown, considered politically dead by many following his stunning defeat in the June primary for mayor of Buffalo, appears to have resurrected his long career as he claimed victory Tuesday in his bruising write-in campaign against Democratic nominee India Walton,” the Buffalo News reports.

Walton was the only name listed on the ballot but she lost by what looks like a 59% to 41% margin.

NV-Gov: Rep. Mark Amodei tells The Nevada Independent that he will run for re-election to his reliably red northern Nevada House seat rather than enter the Republican primary for governor. The congressman went on to predict that there would be an ugly nomination fight to take on Democratic Gov. Steve Sisolak, saying, “Republicans aren’t famous for forgiving and forgetting after a primary. And I’m not saying that disparagingly.”

NY-Gov: New York City Mayor Bill de Blasio last week set up a fundraising committee that could be used in a potential campaign for the Democratic nod.

“Sean Parnell’s military thriller Man of War contains graphic scenes of violence against female characters, raising additional questions about his attitude toward women in the wake of court testimony that he physically and verbally abused his estranged wife,” Politico reports.

“Parnell, who has emerged as the frontrunner in the Pennsylvania GOP Senate primary, portrays multiple scenes of men assaulting women in the 2018 novel, the first of four in a fiction series written by the Army combat veteran.”

WI-Gov, WI-Sen: While state Rep. John Macco initially said that he and businessman Eric Hovde would be fielding a joint poll, paid by Hovde, to assess which of them should seek the Republican nomination for governor, Macco quickly backed off after Hovde’s camp disputed the existence of the alliance.

The state representative said Wednesday, “At this point, there is no poll. I was under the understanding that we were going to get one put out, but that’s not happening at this point.” He added, “I may have misunderstood that, that that (potential poll) was a joint effort.” Macco said he’d now be deciding on his own whether or not to take on Democratic Gov. Tony Evers.

Hovde, who unsuccessfully sought the GOP nomination for Senate in 2012, has yet to comment on his interest in running for governor. The Milwaukee Journal-Sentinel, though, says that unnamed people close to Hovde think he’s mulling the idea over, as well as another upper chamber run should Republican Sen. Ron Johnson retire in 2022.

A new Marquette Law School poll in Wisconsin finds just 38% of voters would vote to re-elect Sen. Ron Johnson (R-WI), while 52% would vote for someone else and 10% say they don’t know or decline to answer.

Similarly, just 40% say they would vote to reelect Gov. Tony Evers (D), while 53% would vote for someone else and 6% say they don’t know or decline to say.