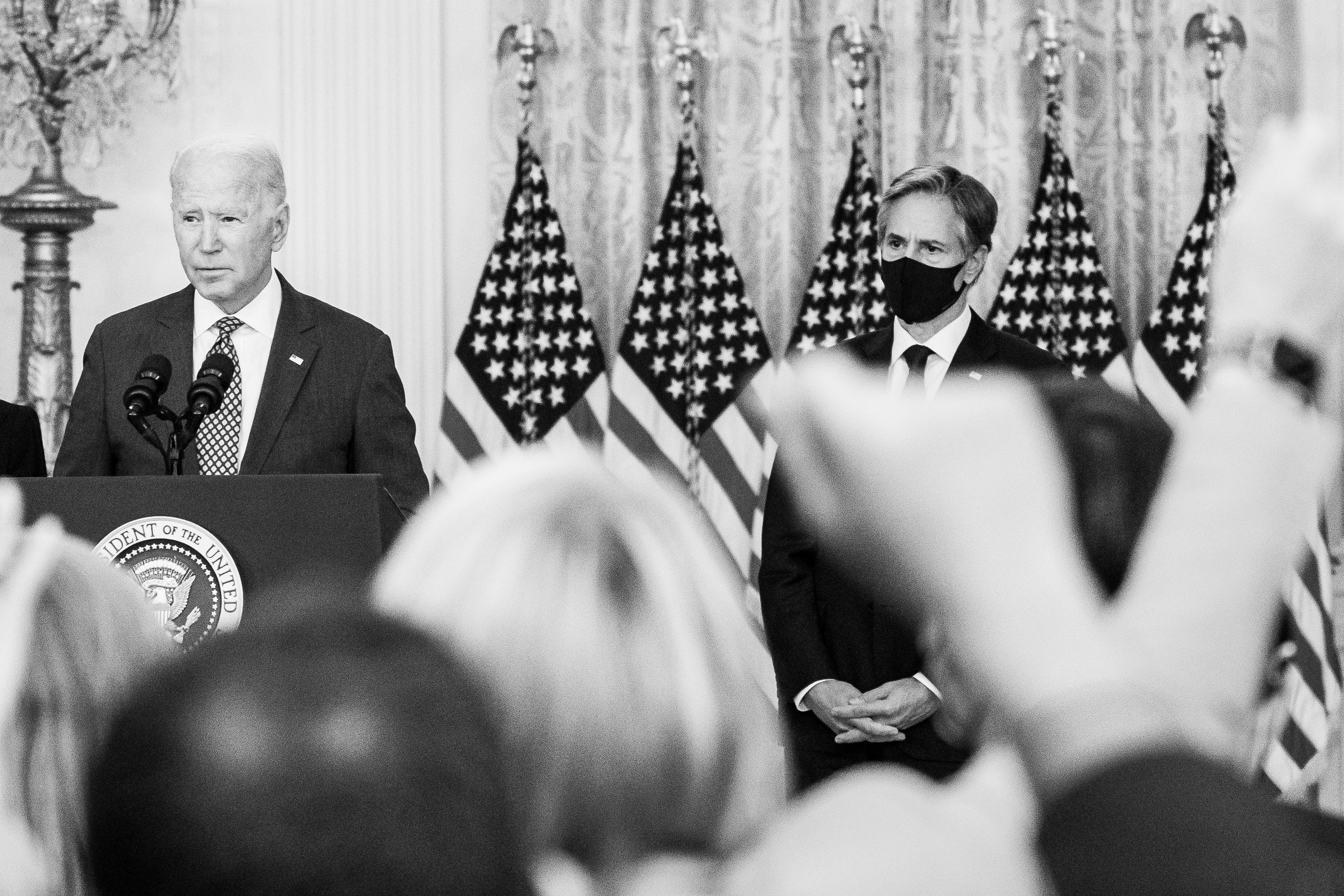 New York Times: “Moderate Democrats argued that the defeat was a sign that Congress must immediately pass the party’s infrastructure bill, regardless of what happens with the shrunken version of Mr. Biden’s legislative agenda. The left blamed the failure of the party to push a broader agenda, including overturning the filibuster to pass liberal priorities like bills protecting the right to vote.”

“And political strategists fear that the party is failing to adequately communicate what Democrats have already done to help the Covid-ravaged country and why they haven’t delivered on issues important to their base.”

Washington Post: “Democratic officials and strategists said that to counteract what unfolded in Virginia — strong anti-Democratic and anti-Biden energy driving the conservative base and suburban independents to vote Republican — the party needs to significantly improve its economic pitch, engage with young voters, voters of color and women under 50 far earlier and more aggressively than they have this year and renew efforts to recruit a more diverse slate of candidates.”

“I mean only in Washington could people think that it is a smart strategy to take a once-in-a-generation investment in infrastructure and prevent your president from signing that bill into law. And that’s somehow a good strategy?” — Sen. Mark Warner (D-VA), quoted by the New York Times.

Punchbowl News: “This is all reminiscent of 2009, when Republicans swept both states on their way to massive victories in the 2010 midterms. They captured the House that cycle — ending Speaker Nancy Pelosi’s first run atop the chamber — and picked up seven Senate seats. The 2022 Senate map isn’t that good for Republicans, but they’re clearly the heavy favorites to win the House again next year. If the GOP does so, Pelosi would be the first speaker since Republican Joseph Martin to lose the majority twice (1948 and 1954). That’s not a list she wants to be on.”

Playbook: “History strongly suggests that the midterms will deliver the next big blow to the incumbent president. But the more immediate danger for Biden is his precarious legislative agenda.”

He added: “You can read so much into all of that last night. I think it should be a call to all of us have to be more attentive to the people back home.”

So what to do? Go on offense. House Democrats are adding four weeks of paid family and medical leave leave back into their version of the budget reconciliation bill, Punchbowl News reports. It had been taken out previously when Sen. Joe Manchin (D-WV) wouldn’t support it.

Some more good news: a new Gallup Poll finds 51% of Americans say the coronavirus situation is getting better, up from 20% in September. However, 51% think pandemic disruption will continue throughout 2022.

Sen. Joe Manchin (D-WV) was “bombarded with text messages” from House progressives over the weekend and that led to the moderate senator pushing back in a public statement on Monday, Politico reports.

Said one Democratic senator: “He was mad because members kept asking him for more shit.”

Politico: “If you’ve been paying attention this year, progressives yelling at Manchin has only further entrenched him in most cases.”

“A majority of Supreme Court justices indicated Wednesday that they believe Americans generally have a right to carry a handgun outside the home for self-defense and that a New York law requiring special justification for getting such a permit is too restrictive,” the Washington Post reports.

“But it was unclear from a two-hour argument in the case how much more the court was willing to do to clarify the Second Amendment. Several expressed concern about allowing those with concealed weapons in sensitive areas, such as stadiums, crowded public events or places were alcohol is served.”

Vox: The NRA had a very good day in the Supreme Court.

CNN: “It’s been more than a decade since the justices have decided a significant Second Amendment case and now the conservative-leaning court has the opportunity to reexamine the scope of the right to keep and bear arms in a case brought by an affiliate of the National Rifle Association.”

“The court could potentially allow more guns to be carried on some of the busiest streets in the largest cities in the nation, at a time when the Biden administration has vowed to push for enhanced gun regulations.”

Dan Pfeiffer: “Typically, the party in power loses off-year elections because their base is complacent or worn down by slow progress, and the other side is fired up. That’s not what happened last night; turnout was high on both sides. Youngkin won because he convinced enough Joe Biden and Ralph Northam voters to switch sides. Virginia is a state dominated by suburbs with a large college-educated population. These are the voters who moved strongly in the Democratic direction when Trump came on the scene. Youngkin won enough of those voters and he did it without sacrificing votes from Trump’s base.”

“In Virginia at least, without Trump on the ballot, Republicans are winning back Romney-Clinton voters faster than Democrats are winning back Obama-Trump voters or finding new voters. If that trend holds, there is no math that gives Democrats the House, Senate, or White House.”

Playbook: “According to exit polls, Biden was about as unpopular as Trump in Virginia. But Biden embraced the race as a referendum on his presidency and campaigned in the state while Trump, to his great annoyance, was persuaded to stay away.”

Dan Balz: “It is always the case that too much can be read into the results of these off-year elections. Maybe it was just the patterns of history in Virginia, which for decades has seen the party that holds the White House lose the governorship. McAuliffe in 2013 was the lone exception. Similarly, New Jersey’s Democratic Gov. Phil Murphy, who defeated Republican Jack Ciattarelli, faced a history of incumbent Democrats struggling to win a second term.”

“But Democrats would be foolhardy to underestimate what happened Tuesday. To lose a state like Virginia, which has been trending Democratic for a decade, and to struggle so much in New Jersey suggests that, unless things change, only the bluest of states or districts are likely to be safe in 2022.”

Zachary Carter: “Republican Glenn Youngkin’s victory in Tuesday’s Virginia gubernatorial election was about schools. It wasn’t about Donald Trump, or inflation, or defunding the police, or Medicare for All, or President Joe Biden’s infrastructure agenda. It wasn’t really about critical race theory or transgender rights—though those issues shaded the situation a bit by highlighting anxieties surrounding the education system.”

“Fundamentally, the contest was about schools—specifically, how many parents remain frustrated by the way public schools have handled the coronavirus pandemic.”

“Covid-19 has been terrible for everyone, and it has been especially hard on parents. Unpredictable school closures didn’t just screw up parents’ work schedules; they drove millions of parents, including 3 million women, out of the workforce altogether. Remote learning doesn’t work well for most kids and has been accompanied by rising levels of depression and anxiety among students.”

“Republican senators on Wednesday voted to block debate on the third major voting rights bill that congressional Democrats have sought to pass this year in response to the state-level GOP push to restrict ballot access following former president Donald Trump’s false claims of a stolen 2020 election,” the Washington Post reports.

“Only one Republican, Sen. Lisa Murkowski of Alaska, voted to advance it.”

“Schumer, speaking from the Senate floor, didn’t directly mention the legislative filibuster, but floated that Democrats should be willing to go it alone to pass voting rights legislation and that the gears of the Senate have ‘ossified.’”

David Wasserman: “The question in the months ahead is how many additional Democratic incumbents decide to retire from potentially vulnerable House districts, now that New Jersey and Virginia have made clear to the political world an anti-Biden freight train is approaching.”

Jonathan Chait: “In the big picture, it would be a huge stretch to blame public school policy for an election outcome that fits a standard historical pattern of voters turning against the president’s party. And yet evidence does indicate that education, an issue that has favored Democrats for decades, has recently turned into a liability.”

“There are polls showing Terry McAuliffe performing substantially worse among parents of K-12 students than among the overall electorate, and other polls showing Glenn Youngkin winning voters who care most about education.”

“The winds in the Democratic Party have shifted overnight. Look no further than its rapidly changing plans on immigration,” Politico reports.

“House Democrats had nearly settled their plans to include immigration reform in President Joe Biden’s social spending plan as polls were closing in Virginia. But by Wednesday morning, with Democrats defeated in the Old Dominion, panicked moderates were demanding key changes to that agreement — unwilling to take a politically toxic vote on a policy doomed in the Senate.”

“It’s one of the first signs of a centrist wing newly emboldened to assert itself as the driver of Biden’s agenda after Tuesday night’s glaring defeat in a once-blue stronghold.”

Former President Donald Trump says if he had not supported Glenn Youngkin (R), the new governor-elect would have lost by a big margin, The Hill reports.

Said Trump: “I’ve heard Virginia is blue, but I’ve never believed it was blue. Without MAGA he would have lost by 15 points, more … instead of giving us credit they say, ‘Oh, he’s more popular than Trump.’”

“Ethiopia declared a state of emergency on Tuesday and called on its citizens to pick up arms and prepare to defend the capital as rebel forces from the northern region of Tigray pressed south toward the city following the capture of two key towns,” the New York Times reports.

“The Tigrayans, who have been fighting the government for the past year, have joined forces with another rebel group as they advance on the capital, Addis Ababa. Foreign officials monitoring the fighting said there were signs that several Ethiopian Army units had collapsed or retreated.”

Charlie Sykes: “Republicans continue to beclown themselves with lies about the election, even as they become more extreme on issues from guns to abortion.”

“But then why does a new NBC poll give Republicans double-digit leads on issues like border security, inflation, crime, the economy, national security and even on ‘getting things done’?”

Rep. Lauren Boebert (R-CO) said she delivered one of her four children in the front seat of her truck as she criticized Transportion Secretary Pete Buttigieg for taking paternity leave during the supply chain crisis, Insider reports.

Said Boebert: “I delivered one of my children in the front seat of my truck. Because as a mom of four, we got things to do Ain’t nobody got time for two and a half months of maternity leave. We have a world to save here.”