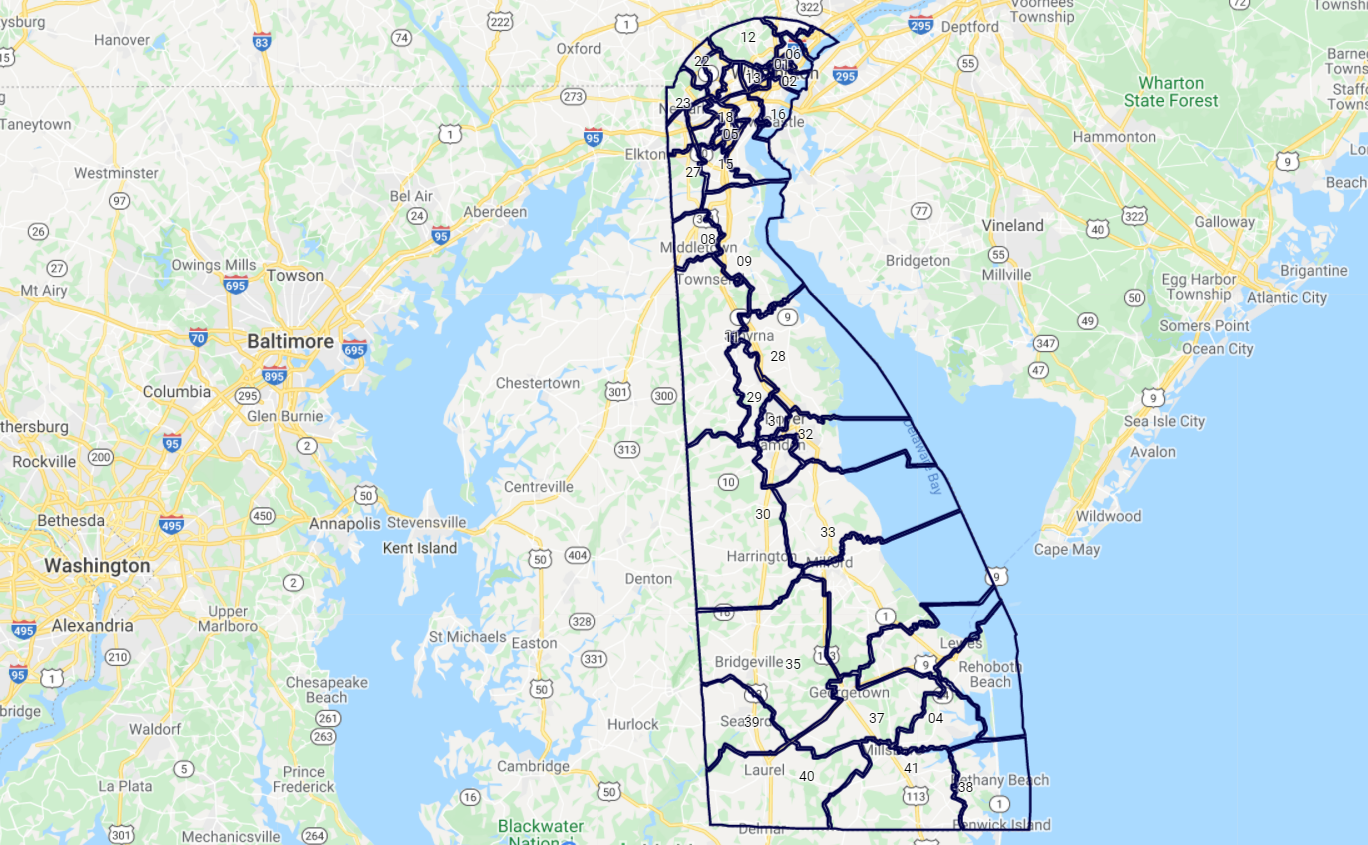 Senate Bill 199, the bill that reapportions and redesigns the legislative districts in both the Delaware House and Senate due to the changes in population reflected in the 2020 Census, passed the Senate 14-7 and the House 40-1 yesterday. The bill will now go to Governor Carney, who has to sign the bill by November 8. All Senate Republicans voted no, due to the lack of a new Sussex Senate district. Only Republican Representative Michael Smith voted no in the House, because he doesn’t like the changes to his district that make it more Democratic.

Here is the Final Senate Map:

Not much changed from the original proposal, but here are the changes:

Here is the Final House Map:

The changes to the final House map from the original proposal is that it looks like Mike Ramone has been put back into the 21st RD. Booo. Other changes include the following:

For the first time in Delaware history, incarcerated people are being counted at their last known address, rather than the correctional facility where they are housed, an important change from past redistricting efforts that will prevent some districts from being underrepresented and others from having their populations artificially inflated.

“I’m incredibly proud of the Delaware General Assembly for sending a fair and just redistricting bill to Governor John Carney on time and without controversy, despite the truncated timetable forced on us by the Trump Administration,”  Senate President Pro Tempore Dave Sokola said.

“Our passage of this legislation today is a testament to the hard work of our dedicated staff who rose to the challenge, worked across the aisle and made sure the public’s voice was heard as we crafted a final product that protects communities of interest, retains minority-majority districts and will assure proper representation for all Delawareans over the coming decade.”

“Redistricting is a technical, detail-oriented process that requires us to follow numerous rules and guidelines, some of which conflict with each other. It’s a delicate balancing act to ensure that all Delaware residents have equal and fair representation,” said House Speaker Pete Schwartzkopf.

“I’m proud to say that we have completed these maps on a shortened schedule with significant input from our constituents. These new districts abide by the one-person, one-vote mandate, maintain existing majority-minority districts, and preserve communities of interest whenever possible.”

The redistricting process requires the General Assembly to follow several standards established by law.  There are numerous criteria considered in drawing legislative districts, including: 1) maintaining majority-minority districts; 2) contiguity of territory; 3) compactness of districts; 4) achieving near equality in population; 5) not creating districts to unduly favor any person or political party; 6) preserving communities of interest; 7) preserving the cores of prior districts; and 8) boundaries such as major roads, streams, and other natural boundaries.

Each chamber is responsible for drafting its own legislative districts. The Senate released its first round of 21 proposed maps on Oct. 11 and a second round on Oct. 25. The 41 initial House maps were released on Oct. 13 with a second round made publicly available on Oct. 28.

The new legislative districts will take effect for the 2022 general election. Candidates in that election must reside in the new districts. Immediately following the November 8, 2022 election, legislators will begin representing constituents within the new district lines.