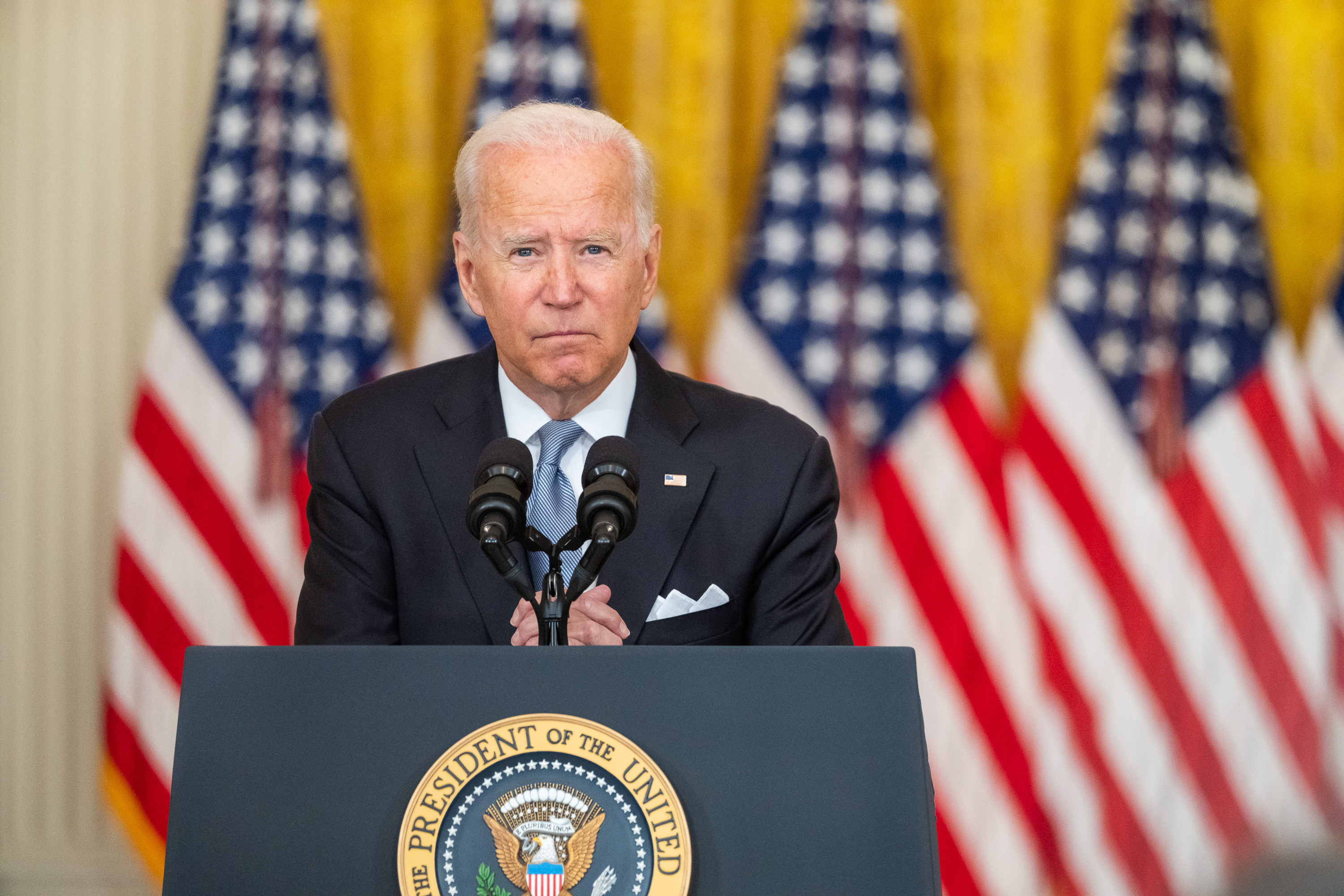 Sen. Joe Manchin (D-WV) decided that it was time for him to enjoy the limelight again, and said that it is “time to vote” on the bipartisan infrastructure bill and that “holding this bill hostage is not going to work in getting my support for the reconciliation bill.”

He added that he won’t support a reconciliation bill without greater clarity: “Simply put, I will not support a bill that is this consequential without thoroughly understanding the impact that it will have on our national debt, our economy, and most importantly, all of our American people.”

In an effort to provide “clarity” to the negotiations over President Biden’s agenda, Sen. Joe Manchin (D-WV) told reporters that holding the bipartisan infrastructure bill “hostage” would not get him to agree to the newly-revised $1.75 trillion budget reconciliation bill. He called the reconciliation bill a “shell game” and suggested that budgetary gimmicks were hiding its true cost.

Rep. Pramila Jayapal (D-WA) signaled that Manchin’s comments will not impact what House progressives do this week, CNN reports. She said they will vote for both the $1.2 trillion bipartisan infrastructure bill and the $1.75 trillion budget reconciliation bill — without knowing what Manchin will ultimately do.

Said Jayapal: “The president says he can get 51 votes for the bill, we are going to trust him… We’re tired of continuing to wait for one or two people.”

“President Biden and congressional leaders are forging ahead with plans to have the House vote on his two massive spending plans, even while backing off their Tuesday deadline amid persistent concerns from key lawmakers,” Axios reports.

“House leaders gave themselves more time on Sunday afternoon by punting procedural moves they’d planned for Monday by the House Rules Committee. That would have set up floor votes on the actual bills on Tuesday.”

“Democrats in Washington wanted to hand President Biden a political win before he departs from the COP26 summit in Glasgow, Scotland, on Tuesday, but that’s no longer possible.”

“After almost three hours of lively arguments, a majority of the justices seemed inclined to allow abortion providers — but perhaps not the Biden administration — to pursue a challenge to a Texas law that has sharply curtailed abortions in the state,” the New York Times reports.

Both Kavanaugh and Barrett ruled in favor of allowing the law to go into effect two months ago so their positions remain unclear.

“Exactly two months after the Supreme Court let Texas effectively outlaw most abortions in the state, it will hear a pair of arguments on Monday that could allow it to reverse course. Much of the attention will be on Justice Brett Kavanaugh,” the New York Times reports,

“The vote the first time around was 5 to 4, with Chief Justice John G. Roberts Jr. joining the court’s three liberal members in dissent.”

“If the outcome is to be different, at least one of the members of the conservative majority will have to switch sides. The most likely candidate, legal experts said, is Justice Kavanaugh, who has come to wield enormous power as the justice at the court’s ideological center, shares some of the chief justice’s concerns for protecting the institutional authority of the court and is sensitive to public opinion.”

“Global supply-chain bottlenecks are feeding on one another, with shortages of components and surging prices of critical raw materials squeezing manufacturers around the world,” the Wall Street Journal reports.

“The supply shocks are already showing signs of choking off the recovery in some regions.”

“Part of the problem is a global economy that is out of sync on the pandemic, restrictions and recovery. Factories and retailers in Western economies that have largely emerged from lockdowns are eager for finished products, raw materials and components from longtime suppliers in Asia and elsewhere. But many countries in Asia are still in the throes of lockdowns and other coronavirus-related restrictions, constricting their ability to meet demand.”

“More than 5 million people worldwide have died from Covid-19 less than two years after the novel pathogen was first documented, despite the arrival of vaccines that have slashed fatality rates across the globe,” Bloomberg reports.

Wall Street Journal: “Shanghai Disneyland was required to test almost 34,000 people Sunday before visitors could leave the resort, after a woman who had attended the park a day earlier was found to be infected with Covid-19. Sunday’s visitors all tested negative but were ordered to self-isolate for another 24 hours before a second test.”

“Some former members of Afghanistan’s U.S.-trained intelligence service and elite military units—now abandoned by their American patrons and hunted by the Taliban—have enlisted in the only force currently challenging the country’s new rulers: Islamic State,” the Wall Street Journal reports.

The Atlantic: “Analysts and officials in Washington are fretting over worsening tensions between the United States and China and the risks to the world of two superpowers once again clashing rather than cooperating. President Joe Biden has said that America ‘is not seeking a new cold war.’ But that is the wrong way to look at U.S.-China relations. A cold war with Beijing is already under way. The right question, instead, is whether America can deter China from initiating a hot one.”

“Beijing is a remarkably ambitious revanchist power, one determined to make China whole again by ‘reuniting’ Taiwan with the mainland, turning the East and South China Seas into Chinese lakes, and grabbing regional primacy as a stepping-stone to global power. It is also increasingly encircled, and faces growing resistance on many fronts—just the sort of scenario that has led it to lash out in the past.”

“I guess I shouldn’t apologize, but I do apologize for the fact that the United States — the last administration — pulled out of the Paris Accords and put us sort of behind the eight ball.”  —  President Biden, quoted by The Hill.

Daily Beast: “Climate-related warfare is a near-term reality—not some far-off boogeyman—according to leading defense thinkers and military strategists. They are still talking about the importance of fighting climate change, but they’re also making plans to fight other human beings because of climate change.”

Washington Post: “The consequences of that day are still coming into focus, but what is already clear is that the insurrection was not a spontaneous act nor an isolated event. It was a battle in a broader war over the truth and over the future of American democracy.”

“Since then, the forces behind the attack remain potent and growing. Trump emerged emboldened, fortifying his hold on the Republican Party, sustaining his election-fraud lie and driving demands for more restrictive voting laws and investigations of the 2020 results, even though they have been repeatedly affirmed by ballot reviews and the courts. A deep distrust in the voting process has spread across the country, shaking the foundation on which the American experiment was built — the shared belief that the nation’s leaders are freely and fairly elected.”

Molly Ball has a must-read piece that looks at how a group of top CEOs came together to help thwart Donald Trump’s post-election attack on democracy.

“The Biden administration will publish in the coming days a rule requiring private businesses to ensure their employees are vaccinated against Covid-19,” CNBC reports. “The rule applies to businesses with 100 or more employees. It’s estimated to cover about two-thirds of the private sector workforce.”

“White House press secretary Jen Psaki said Sunday she has contracted Covid-19,” the AP reports. “She said she was last in contact with Biden on Tuesday, when she met him in the White House. Psaki said they were more than 6 feet apart and wearing masks.”

“Rep. Marjorie Taylor Greene (R-GA) has been reprimanded by the House sergeant-at-arms at least 20 times this year for refusing to wear a mask in the chamber, which has added up to $48,000 worth of associated fines,” The Hill reports.

Rep. Steve Christiansen (R) “attempted to obtain the personal information and voting history of every single registered voter in the state before he resigned last week,” the Salt Lake Tribune reports. “And he tried to leverage his position as an elected official to obtain the data.”

“While campaigning for a Republican congressional candidate in central Florida on Saturday, Rep. Matt Gaetz (R-FL) complained about the metal detectors in the Capitol, lying about why they were installed and going so far as to joke about blowing them up with explosives,” Mediaite reports.

“Sen. Marco Rubio (R-FL) will call for Republicans to break up with Big Business when he addresses the National Conservatism Conference on Monday,” Axios  reports.

“Rubio is seeking re-election in one of the most high-profile and expensive races of the 2022 cycle. He’s using this speech to differentiate himself from traditional economic conservatism by branding himself as a leading proponent of the working class.”

Sen. Josh Hawley (R-MO) “decried what he characterized as Democrats’ prolonged attack on traditional masculinity, using it to make an argument for restructuring the economy in a way that would help men thrive,” the Kansas City Star reports.

“Treasury Secretary Janet Yellen on Sunday said Democrats should be willing to approve a fix to the nation’s debt ceiling without GOP support if necessary, an approach senior Democrats ruled out during a recent standoff over the issue,” the Washington Post reports.