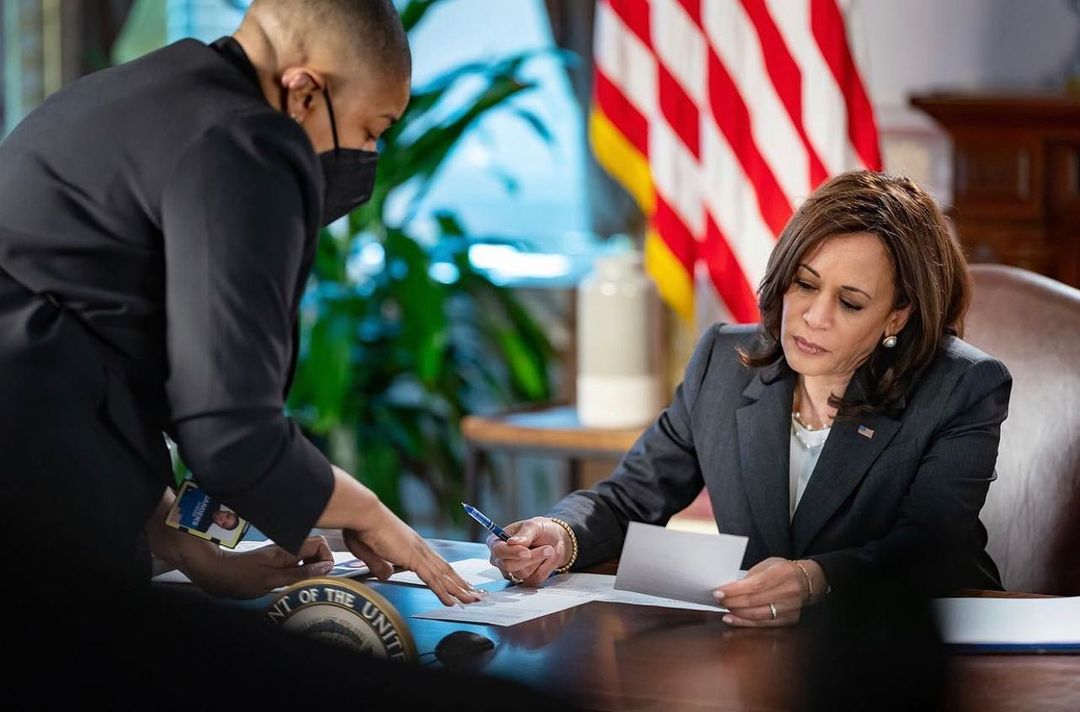 “Support for reducing spending on police has fallen significantly: 15% of adults now say spending should be decreased, down from 25% in 2020.”

NEW YORK 2ND CD. 2020 Democratic nominee Jackie Gordon announced Tuesday that she would seek a rematch against freshman Republican Rep. Andrew Garbarino in a Southern Long Island seat that has yet to be redrawn. Garbarino ended September with $882,000 in the bank to defend himself.

Gordon, who is an Army veteran and former member of the Babylon Town Council, looked like a big longshot in 2019 when she entered the race to take on Republican incumbent Peter King, but national Democrats took a new interest in her after the longtime congressman decided to retire. Gordon ultimately outraised Garbarino, who was an assemblyman at the time, by a lopsided $4.4 million to $1.7 million margin, while outside groups on both sides spent heavily here.

Trump in 2016 carried the 2nd District 53-44, but Democrats hoped that his toxicity in the suburbs would put Gordon over the top in an area long accustomed to electing Republicans down the ballot. That’s not how things turned out, though, as Garbarino fended off Gordon 53-46 as Trump was prevailing 51-47 here.

“Rep. Jim Clyburn (D-SC), the third-highest ranking Democrat in the House, warned on Wednesday night that his party is not currently positioned to maintain its majorities in the House and Senate in the 2022 midterm elections due to divisions among the party’s various factions,” Jewish Insider reports.

Said Clyburn: “I think we can. I’m not sure we will, My dad used to say to me all the time, ‘Wherever there is a will, there is a way.’ I’m not too sure that Democrats have yet developed the will to win in 2022.”

“The comments by Prevo, a Liberty trustee who took over as president following the resignation last year of Jerry Falwell Jr., raise new questions about the blurred line between education and politics at the university, which as a 501(c)(3) charity is not supposed to participate directly in political campaigns.”

Said Prevo: “I have a 50c3 church. For 30 years, I’ve known how to handle that and not get into trouble. The homosexual community has tried to take me down for at least 30 years, and they have not been successful because I know how to work the 50c3.”

GEORGIA U.S. SENATOR . Mitch McConnell on Wednesday endorsed former NFL player Herschel Walker, the Trump-backed candidate the minority leader reportedly feared just months ago would jeopardize Team Red’s chances against Democratic Sen. Raphael Warnock. McConnell, though, delivered his establishment stamp of approval to Walker this week by proclaiming, “Herschel is the only one who can unite the party, defeat Senator Warnock, and help us take back the Senate.” Walker is the first non-incumbent that McConnell has endorsed in a primary this cycle.

Back in August, CNN reported that McConnell was one of several Republicans who fretted that Walker, who still had yet to move back to Georgia from Texas, “would implode” on the campaign trail. Walker’s detractors feared that the first-time candidate couldn’t run a serious campaign, and they also grew especially wary after the Associated Press reported that his ex-wife had accused him of threatening to kill her in 2005. McConnell, CNN said, was meeting with some of Walker’s primary foes and even hoping that either former Sens. David Perdue or Kelly Loeffler, who each lost in this January’s runoffs, would run.

So, what’s changed? McConnell himself said last month, “There are some things written that indicate he’s had some challenges in his life. On the other hand, the good news is, he’s made several impressive performances on national television.” The minority leader also favorably noted, “His whole team is the same team around [former Sen.] Johnny Isakson.”

Politico’s Alex Isenstadt writes now that unnamed GOP officials were happy with the $3.8 million that Walker raised during his opening fundraising quarter, as well as the aforementioned campaign staff. These party insiders added that they very much wanted Walker to avoid an ugly primary that could weaken him ahead of the general election with Warnock.

However, several of Walker’s intra-party opponents very much have the resources to put up a fight if they choose to go forward. Walker’s $2.5 million war chest gave him the most money of any of the GOP candidates at the end of September, but banking executive Latham Saddler also had a credible $1.6 million at his disposal. State Agriculture Commissioner Gary Black, who is the only elected official in the primary, had $930,000, while businessman Kelvin King had $455,000 to spend. Warnock, who has no serious primary opposition in sight, meanwhile had an enormous $17.2 million at his disposal.

UTAH REDISTRICTING. Utah’s bipartisan redistricting commission released proposed congressional and legislative maps late on Monday, but don’t expect lawmakers in the Republican-run legislature to pay them any heed. After the commission was created by voters in 2018 to tamp down on gerrymandering, Republicans passed legislation gutting the board and made it purely advisory. Legislators have since been working on their own maps and are set to convene for a special session to take up redistricting on Nov. 15.

ALABAMA REDISTRICTING. A joint committee in Alabama’s Republican-run legislature advanced new congressional and legislative maps in a series of party-line votes on Tuesday ahead of a special session that will begin on Thursday. The maps were not posted on the legislature’s site until after the vote; they were made public beforehand only because state Rep. Chris England, who is also chair of the state Democratic Party, posted copies on Twitter.

NEW MEXICO GOVERNOR. Republican Mark Ronchetti, who recently quit his job as a TV meteorologist for the second time, has finally kicked off his long-anticipated bid for governor. Ronchetti had been a fixture at local news station KRQE for years until he left to pursue a bid for Senate in 2020. While he lost that open-seat race to Democratic Rep. Ben Ray Lujan, his 52-46 defeat was closer than expected, though a very late $250,000 ad buy from the Senate Majority PAC offered a hint that things were tighter than Democrats would have liked.

Following his loss, Ronchetti returned to KRQE, a move so unusual—going from broadcasting to politics and back to broadcasting—that the only other examples we’re aware of are from Latvia and the Philippines. The reprise did not last long, though, as Ronchetti again quit last week, this time to run against Democratic Gov. Michelle Lujan Grisham as she seeks a second term.

MICHIGAN ELEVENTH CD. 2020 Republican nominee Eric Esshaki announced this week that he would seek a rematch against Democratic Rep. Haley Stevens, a decision that comes before Michigan’s new independent redistricting commission has completed its work.

Esshaki, who worked as an attorney, won a crowded August primary for a suburban Detroit seat that Donald Trump had carried 50-45 in 2016, but he looked like the decided underdog for much of the campaign. The 11th District, like many other ancestrally red suburban areas, had lurched hard to the left in 2018, and Esshaki initially struggled to raise money against the well-funded Stevens. National Democrats were especially confident, as the DCCC scaled back its reservations in the Detroit media market in late September.

The Congressional Leadership Fund, though, saw an opportunity around that same time, and it began airing ads caricaturing Stevens as a radical. The incumbent’s allies, including the DCCC, ended up spending serious amounts of money to aid her in the final weeks of the contest. That late rush may have made the difference, as Stevens turned back Esshaki in by a close 50-48 margin as Joe Biden won the seat 52-47.

Alford said he had considered running for office before but believed he was more useful to conservatives by staying where he was. The novice candidate, though, wrote earlier this week that “it has not been easy being in the media while also being a conservative Christian who respects law enforcement and wants to promote local entrepreneurs and small business owners.”

Alford argued in his campaign kickoff, which naturally took place on a local conservative talk radio program, “The more I tried to be an alternative to provide balance, the more of a fight it was each day,” and, “I’ve got 20, maybe 30 years left in me to do something really spectacular and serve people.”

MASSACHUSETTS REDISTRICCTING. Massachusetts’ Democratic-run state Senate has passed new legislative maps, about a week after the state House did the same thing. The plans now go to Republican Gov. Charlie Baker for his signature. While Baker could veto the maps, they passed both chambers almost unanimously. Lawmakers have yet to introduce any congressional redistricting proposals.

OREGON FIFTH CD. Attorney Jamie McLeod-Skinner announced Thursday that she would challenge moderate Rep. Kurt Schrader in the primary for this redrawn seat.

McLeod-Skinner entered the race with an endorsement from Milwaukie Mayor Mark Gamba, who had originally said he’d run again following his 69-23 primary defeat last year. Schrader, for his part, has yet to say if he’ll run for re-election in the 5th District, which contains his hometown of Canby, or the new 6th, which includes more of his current constituents. The 5th District, which includes southern Portland suburbs and central Oregon, supported Joe Biden 53-44.

McLeod-Skinner, who says she would be Oregon’s first LGBTQ member of Congress, served as Team Blue’s 2018 nominee in the safely red 2nd District. McLeod-Skinner raised $1.3 million for her campaign against veteran Republican Rep. Greg Walden but lost 56-39, which still was the closest general election of the congressman’s long career. (Walden retired the following cycle.)

McLeod-Skinner then ran for secretary of state last year and took last in the three-way primary with 28%; the winner, with 36%, was Shemia Fagan, who went on to prevail in the general election. Afterwards, McLeod-Skinner served a stint as interim city manager of the small community of Talent.

McLeod-Skinner didn’t mention Schrader in her announcement but said earlier this month, “Normally I wouldn’t consider challenging an incumbent Democrat. However, with Kurt Schrader, I don’t have to make much of an argument to persuade a lot of people.” Schrader himself made national headlines in January when he comparing the idea of impeaching Donald Trump to a “lynching,” a statement he ended up apologizing for. The congressman since then has shown skepticism towards Biden’s infrastructure bill, saying in September, “It would have to be way under $1 trillion for me to get remotely interested.”

WEST VIRGINIA SECOND CD. National Research, working on behalf of GOPAC, has released the first poll we’ve seen of the incumbent vs. incumbent Republican primary for this redrawn northern West Virginia seat, and it shows David McKinley leading Alex Mooney 44-29. GOPAC doesn’t appear to have taken sides, though Politico’s Ally Mutnick notes it has donated to ​​McKinley in the past.