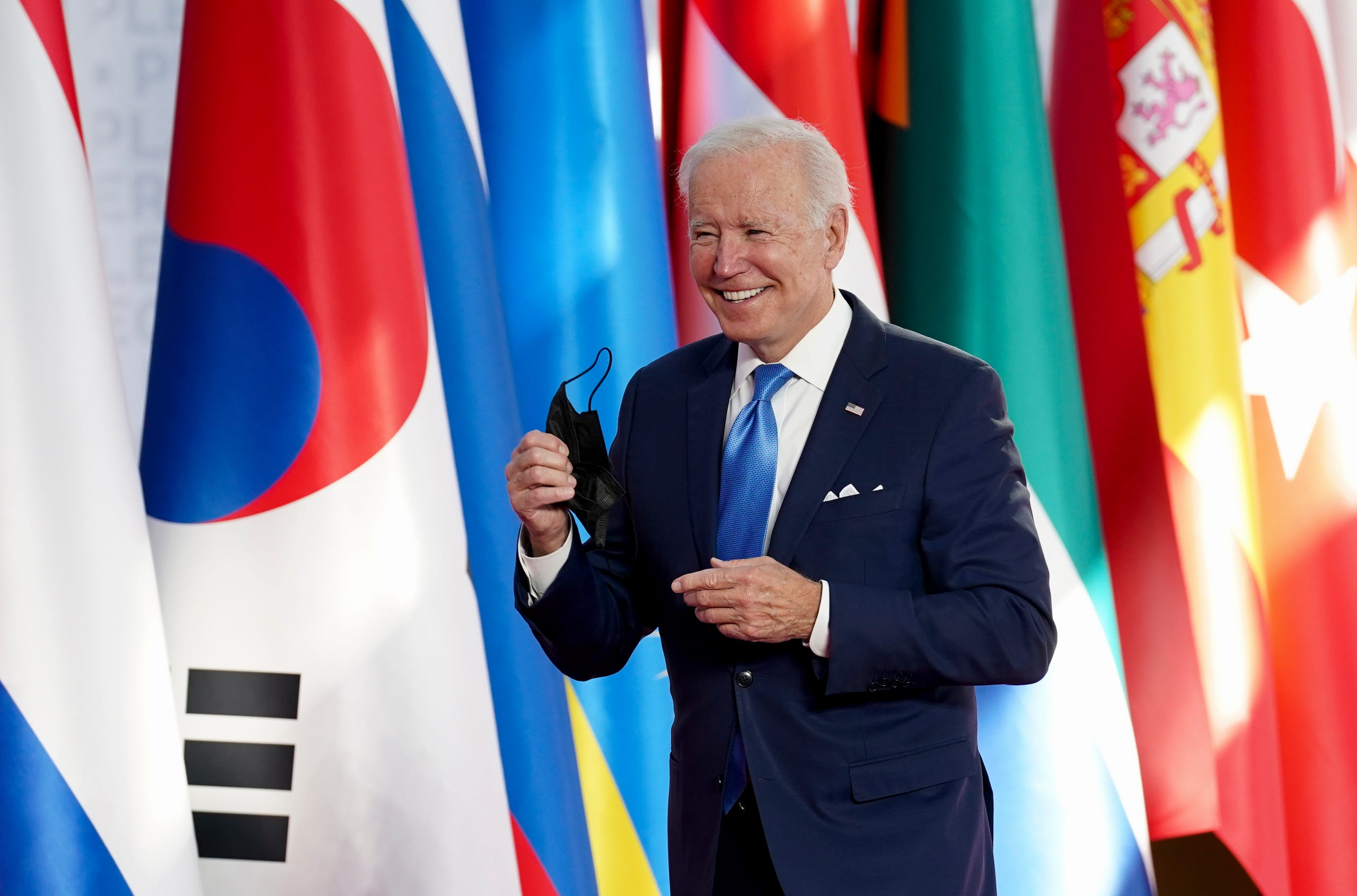 “House Democratic leaders are telling lawmakers they plan to pass both a $1.2 trillion infrastructure bill and a $1.75 trillion social spending bill as early as Tuesday, Axios reports.

“It’s a very ambitious timeline, but leadership is eager to deliver a win to President Biden while he meets with world leaders in Europe.”

“This would mark dramatic progress since the president left the country on Thursday with only a deal on a framework for his massive social spending bill, but no votes.”

Playbook: “For the provisions left out of the Build Back Better framework — like the politically popular paid leave proposal — this wouldn’t be the last bite at the apple. He would revisit it throughout his presidency.”

“Outside advocates tell us the White House and members of Congress have assured paid leave advocates of the same thing. The administration also tried to signal the promise in more subtle ways, like listing care first in a fact sheet about the final package, despite climate change mitigation being the area with the most dollars attached.”

“For now, the promise to keep trying appears to have won the patience of many advocates of the care economy — even if it’s apparent it will be a very tall order for Biden to make good on it.”

Politico on what happened on Thursday. “What happened next is a dizzying fall of dominos. Biden didn’t directly ask House Democrats to pass his bipartisan infrastructure bill, leaving Pelosi to make the request. Then Jayapal’s progressives dug in against the infrastructure vote that the speaker wanted to tee up — using the president’s lack of a request for cover.”

“The top three Democrats knew they were within striking distance of passing the bill that morning and were left dumbfounded by the lack of a direct ask from Biden. They all agreed that’s why they couldn’t get the votes.”

Playbook: “Just when it looked like the day would end in embarrassment for Democrats, the Congressional Progressive Caucus issues a surprise endorsement of the president’s compromise plan — removing one of the last big obstacles in its way.”

“The CPC’s decision to back the new BBB framework got drowned out by the group’s refusal to allow a BIF vote Thursday before full text was drafted. That deprived Speaker Nancy Pelosi of the vote she was determined to hold on BIF, and yielded lots of headlines about Democrats’ failure to clinch the win.”

“But the dispute over sequencing masked a major achievement for the president: Hill progressives now appear ready to swallow this deal — and that means it’s likely a matter of when, not if, it passes.”

“The fact that the group isn’t making demands for major changes is quite something given that many of their priorities were significantly scaled back as moderates got most of what they wanted.”

New York Times: “It is a deal years in the making, which was pushed over the line by the sustained efforts of Mr. Biden’s Treasury Department, even as the president’s plans to raise taxes in the United States for new social policy and climate change programs have fallen short of his promises.”

“Consumer prices rose at the fastest pace in 30 years in September while workers saw their biggest compensation boosts in at least 20 years,“ the Wall Street Journal reports.

Politico: “The U.S. economy is growing at its slowest pace since the recovery began. Faster inflation is likely to linger well into next year. Millions remain unemployed even as small businesses struggle to hire workers. And Republicans are readying attacks on President Joe Biden over all of it.”

“The Supreme Court Friday turned down a request from a group of Maine health-care workers to block a state coronavirus vaccination mandate that does not contain an exception for religious objectors,” the Washington Post reports.

“As Vice President Mike Pence hid from a marauding mob during the Jan. 6 invasion of the Capitol, an attorney for President Donald Trump emailed a top Pence aide to say that Pence had caused the violence by refusing to block certification of Trump’s election loss,” the Washington Post reports.

“The attorney, John C. Eastman, also continued to press for Pence to act even after Trump’s supporters had trampled through the Capitol — an attack the Pence aide, Greg Jacob, had described as a “siege” in their email exchange.”

Said Eastman: “The ‘siege’ is because YOU and your boss did not do what was necessary to allow this to be aired in a public way so that the American people can see for themselves what happened.”

Covid-19 was not produced as a biological weapon, according to a intelligence report declassified and published Friday.

New York Times: “American intelligence agencies are unlikely to be able to draw a firm conclusion about the origin of the novel coronavirus without more information from China on the earliest cases or new scientific discoveries about the nature of the virus.”

Michael Gerson: “Only one party has based the main part of its appeal on a transparent lie. To be a loyal Republican in 2021 is to believe that a national conspiracy of big-city mayors, Republican state officials, companies that produce voting machines and perhaps China, or maybe Venezuela, stole the 2020 presidential election. The total absence of evidence indicates to conspiracy theorists (as usual) that the plot was particularly fiendish. Previous iterations of the GOP tried to unite on the basis of ideology and public purpose. The current GOP is united by a common willingness to believe whatever antidemocratic rot comes from the mouth of an ambitious, reckless liar.”

“Only one side of our divide employs violent intimidation as a political tool. Since leaving the presidency, Trump has endorsed the view that the events of Jan. 6 were an expression of rowdy patriotism and embraced the cruel slander that the Capitol Police were engaged in oppression.”

“Only one political movement has made a point of denying the existence and legacy of racism, assuring White people that they are equally subject to prejudice, and defending the Confederacy and its monuments as ‘our heritage.’ This is perhaps the ultimate in absurd bothsidesism.”

“The Supreme Court will face a bramble of unsettled legal questions when it reviews Texas’s most-restrictive-in-the-nation abortion law Monday, but the inquiry itself is evidence of a changed court whose view of abortion as a constitutional right is in doubt,” the Washington Post reports.

“Monday’s hastily scheduled hearing opens the most dramatic month for reproductive rights at the Supreme Court in three decades. That was when a surprising majority of Republican-nominated justices did the unexpected and affirmed rather than renounced the right to abortion established in Roe v. Wade in 1973.”

“Such an outcome this time around — as the court considers the Texas law and, on Dec. 1, a Mississippi ban on abortion after 15 weeks, far earlier than current Supreme Court precedent allows — would be a bitter disappointment for antiabortion activists who feel this is their chance.”

“People inoculated against Covid-19 are just as likely to spread the delta variant of the virus to contacts in their household as those who haven’t had shots, according to new research,” Bloomberg reports.

“The results go some way toward explaining why the delta variant is so infectious even in nations with successful vaccine rollouts, and why the unvaccinated can’t assume they are protected because others have had shots. Those who were inoculated cleared the virus more quickly and had milder cases, while unvaccinated household members were more likely to suffer from severe disease and hospitalization.”

“President Biden said that Pope Francis told him he should keep receiving Communion, after holding an unusually long meeting with him at the Vatican,” Reuters reports.

“Asked if abortion came up in the talks, Biden said the Pope told him he was happy he was a good Catholic.”

“For the first time during his administration, President Biden is meeting with Pope Francis on Friday, bringing together the world’s two most powerful Catholics, who share plenty of common ground and are contending with similar adversaries and polarization within the church,” the Washington Post reports.

“The chief judge presiding over the federal court in Washington on Thursday unleashed a blistering critique of the Justice Department’s prosecution of Capitol rioters, saying fiery rhetoric about the event’s horror did not match plea offers involving minor charges,” the Washington Post reports.

Said Judge Beryl Howell: “No wonder parts of the public in the U.S. are confused about whether what happened on January 6 at the Capitol was simply a petty offense of trespassing with some disorderliness, or shocking criminal conduct that represented a grave threat to our democratic norms. Let me make my view clear: The rioters were not mere protesters.”

“Migrant families separated at the border by the Trump administration may be eligible to each receive hundreds of thousands of dollars in compensation for the damage inflicted on them by the policy,“ the New York Times reports.

“Some families could receive as much as $450,000 for each member who was directly affected.”

Wall Street Journal: “Financial incentives, public-health messages and other tactics used by state and local governments and employers to encourage people to get the Covid-19 vaccine didn’t have a noticeable impact on vaccination rates among those who already were hesitant about getting the shot, new research shows.”

Karen Tumulty: “In his skirmishes with the liberals of his party over the size and shape of their agenda, Sen. Joe Manchin III (D) has repeatedly warned that the left would lead the nation into a crippling dependency on government.”

“Not surprising from a senator who hails from a state that presents itself as fiercely self-reliant. But in fact, West Virginians are not only older, sicker and poorer than most of the nation; they are, by some measures, more reliant on the federal government than any other state.”