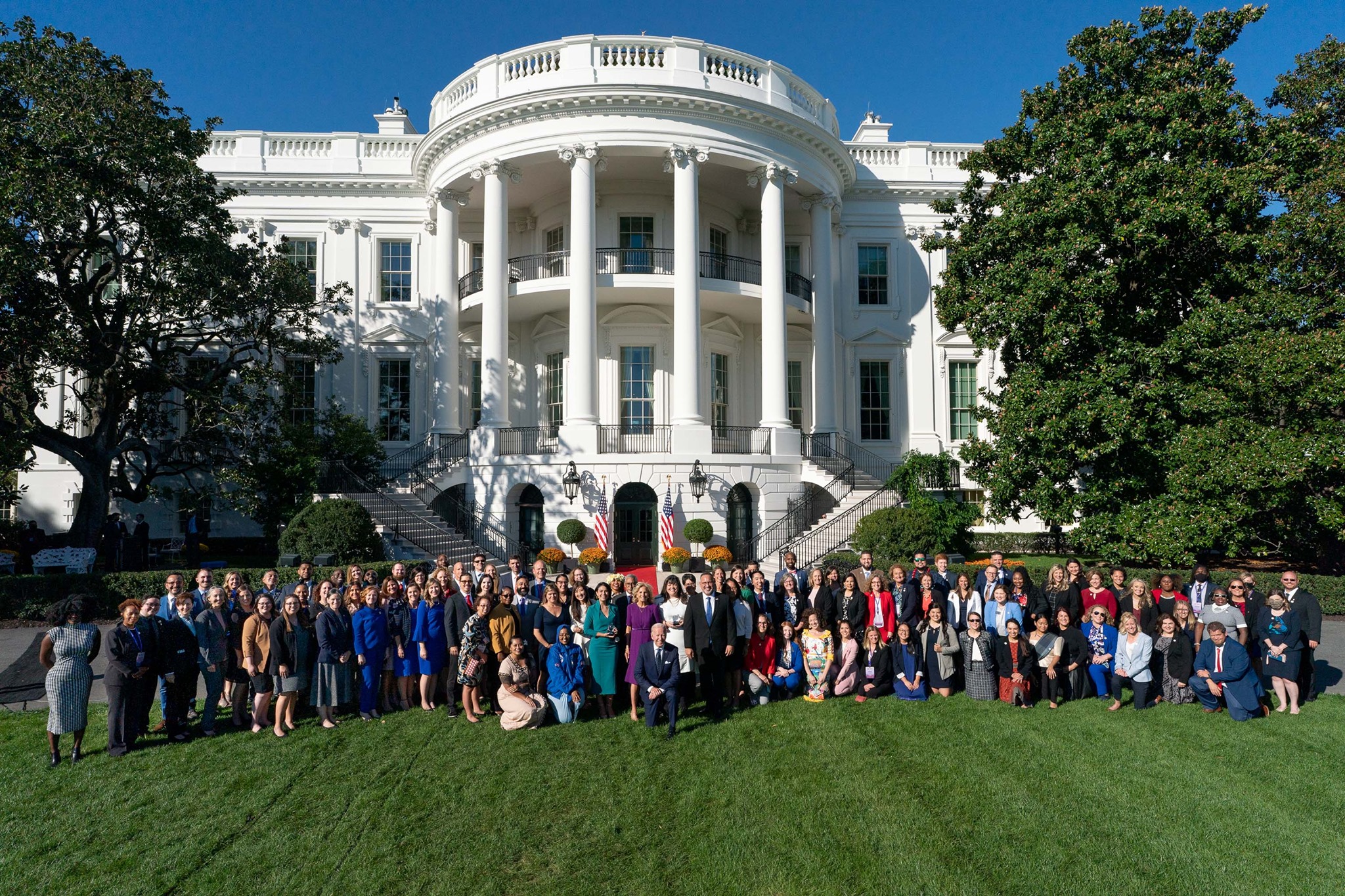 For the first time in AP-NORC polling, President Biden earns negative marks for his handling of the economy, with 58% disapproving and 41% approving. In March, 60% approved of Biden on the economy.  And just 26% think the way things are going in the country will improve in the next year.

In New Jersey, Stockton University’s new poll shows Democratic Gov. Phil Murphy with a 50-41 lead against Republican Jack Ciattarelli, which is exactly what the school found last month as well.

In Virginia, Republican Glenn Youngkin earned plenty of coverage (much of it unflattering) when he ran a commercial starring a parent who in 2012 tried to get Toni Morrison’s Pulitzer Prize-winning classic “Beloved” banned from Fairfax County Public Schools, and Democrat Terry McAuliffe quickly went up with a response commercial. His spot is centered around an African American mother who tells the audience, “Nothing is more important than my children’s education. So when I heard about Glenn Youngkin wanting to ban books by prominent Black authors, it scared me.”

CNN: “Officials and aides in secretary of state offices in Arizona and other states targeted by former President Donald Trump in his attack on last year’s election results told CNN about living in constant terror — nervously watching the people around them at events, checking in their rearview mirrors for cars following them home and sitting up at night wondering what might happen next.”

“Private equity and hedge funds accounted for over $625 million in political spending during the cycle leading up to the 2020 election, with the lion’s share going to campaign contributions,” CNBC reports.  “It was the most this segment of the financial industry spent on lobbying and campaign contributions in a two-year election cycle.”

The local media reported Wednesday that New York City Public Advocate Jumaane Williams has filed paperwork to set up a gubernatorial campaign committee the previous week, a development that came weeks after he formed an exploratory committee for a potential Democratic primary bid against incumbent Kathy Hochul. Williams on Tuesday said his exploratory effort was “going well” and he might provide more details about his 2022 plans in the next few days.

“A coalition of right-wing MAGA candidates, including multiple Trump-backed candidates, are seeking to take control of elections in states across the U.S.—and one says they’re formally working with a group of conspiracy theorists, as well as with a QAnon influencer who some in the conspiracy movement believe is John F. Kennedy Jr. in disguise,” Vice  News reports.

IOWA U.S. SENATOR. A survey from the GOP pollster Cygnal for Iowans for Tax Relief, a conservative group, finds Republican Sen. Chuck Grassley leading his most prominent Democratic opponent, former Rep. Abby Finkenauer, by a 55-39 margin. That’s similar to a nonpartisan survey released by Selzer & Co. last month that had Grassley ahead 55-37.

Kristof, who won Pulitzer Prizes for reporting on Tiananmen Square and Darfur, grew up in Oregon but only moved back to the state two years ago and has never sought office before. He joins a primary field that includes two prominent names, state House Speaker Tina Kotek and state Treasurer Tobias Read. Republicans also have a busy primary, with physician Bud Pierce, the party’s 2016 nominee, likely the most prominent candidate. Oregon’s governorship is open because Democrat Kate Brown is term-limited.

“Two rising Georgia Democratic stars could go from allies to rivals in 2022, depending on how Republicans redraw the new congressional map,” the Atlanta Journal Constitution reports.

“That’s because no matter how the lines are drawn during a legislative session that starts next week, Reps. Carolyn Bourdeaux (D-GA) and Lucy McBath (D-GA) will be in the political crosshairs of the Republican majority.”

“If the new map makes Bourdeaux’s seat safer for Democrats, there’s a solid chance that McBath or another Democrat could challenge her in the primary, a prospect that some Georgia partisans are quietly anticipating.”

NORTH CAROLINA U.S. SENATOR. We’ve got another strange internal poll of a GOP primary that shows the candidate releasing it leading … but doing worse than before. This time the survey is from Public Opinion Strategies on behalf of former Gov. Pat McCrory, which shows McCrory beating Rep. Ted Budd 40-25 while former Rep. Mark Walker is back at 8%. But unmentioned in the memo, of course, is the fact that in an April POS poll, McCrory had a much wider 48-13 lead on Walker, with Budd taking just 9%.

Meanwhile, the Justice Department reportedly told retiring Sen. Richard Burr on Jan. 19 that it would drop an investigation into allegations that he engaged in insider trading last year after receiving classified briefings about the coronavirus as chair of the Senate Intelligence Committee, the Securities and Exchange Commission confirmed this week that it was probing the Republican. On Thursday, the SEC said in a court filing that in February of 2020, just weeks before the emerging pandemic tanked the stock market, Burr dumped $1.6 million in stocks and quickly called his brother-in-law, Gerald Fauth. The minute after that 50-second call was complete, says the SEC, Fauth called his own broker and ultimately sold between $97,000 and $280,000 in shares that day. The SEC further said it was investigating both men for insider trading.

Burr announced in 2016 that his third term would be his last, and both parties have competitive primaries to succeed him. Should Burr vacate his seat before his term ends in January of 2023, though, a fellow Republican would replace him for the rest of the term because state law requires ​​Democratic Gov. Roy Cooper to appoint a new senator from a list of three names provided by the state GOP.

CONNECTICUT GOVERNOR.  A survey from Public Policy Polling for Democrats for Education Reform, a pro-charter schools group, finds Democratic Gov. Ned Lamont leading former state House Minority Leader Themis Klarides 52-32 and businessman Bob Stefanowski 52-36. This is the first poll of Connecticut’s race for governor next year. Both Klarides and Stefanowski, who was the GOP’s 2018 nominee, have talked about running but neither has committed to a campaign yet.

MICHIGAN GOVERNOR. Democratic Gov. Gretchen Whitmer continues to lead the pack in fundraising, reporting a $3.1 million haul from July 21 through Oct. 20 and $12.6 million in the bank. Her best-funded Republican opponent, former Detroit police Chief James Craig, brought in $1.4 million during that timeframe and had $1 million left over. Chiropractor Garrett Soldano, meanwhile, raised $496,000 and had $473,000 to spend, while conservative radio host Tudor Dixon took in $215,000 and had $165,000 on hand.

Whitmer could, however, have to disgorge $3 million from her war chest thanks to a Republican lawsuit challenging her practice of accepting contributions greater than the normal state limits because she faces dozens of recall efforts. The suit argues that Whitmer cannot keep those donations if a recall does not actually go forward, and none appear likely to. However, even if Republicans are successful, Whitmer would be able to donate any excess funds to the state Democratic Party, which could use them to support her re-election bid.

NEW HAMPSHIRE GOVERNOR. Former state Sen. Dan Feltes, who was the Democrats’ nominee for governor last year and hadn’t ruled out a repeat bid, has taken himself out of contention by moving to Iowa.

NEW JERSEY GOVERNOR. While the Republican Governors Association had previously only made a limited foray into New Jersey’s gubernatorial race, the group has now spent $2.2 million on behalf of Republican Jack Ciattarelli. That’s similar, though, to the sum the RGA deployed in a losing effort four years ago, and overall, outside spending has heavily favored Democratic Gov. Phil Murphy: Altogether, Murphy allies have spent $18.3 million to date, compared to just $2.7 million on the GOP side.

NEBRASKA GOVERNOR. Donald Trump has given his endorsement in Nebraska’s open governor’s race to agribusinessman Charles Herbster, who faces several opponents in next year’s GOP primary.

WISCONSIN GOVERNOR. State Rep. John Macco says that he and businessman Eric Hovde, who ran for the Senate in 2012, are both considering bids for governor but are attempting to work out between themselves which one of them should enter the GOP primary. To that end, says Macco, they’re going to field a poll, paid for by Hovde, and intend to decide by Thanksgiving.

Howwwever … while Hovde hasn’t commented on this purported alliance, an unnamed “person close to him disputed much of what Macco claimed, saying the two have not had in-depth discussions and were not conducting a joint poll.” That same person also hinted that Hovde might be contemplating a bid for the Senate if fellow Republican Ron Johnson declines to seek a third term.

MARYLAND GOVERNOR. Former U.S. Secretary of Labor Tom Perez this week earned endorsements from AFSCME Council 3 and AFSCME Council 67, which Maryland Matters says together represent “more than 50,000 state, county, municipal, school board, and higher education employees” in the state, ahead of next year’s Democratic primary.

NEW HAMPSHIRE FIRST CD. 2020 Republican nominee ​​Matt Mowers has released a Cygnal poll of the current 1st District to argue he’s the heavy favorite to again win the nomination to take on Democratic incumbent Chris Pappas. The survey gives Mowers the lead with 34% of the vote, while former TV reporter Gail Huff Brown was a distant second with 7%.