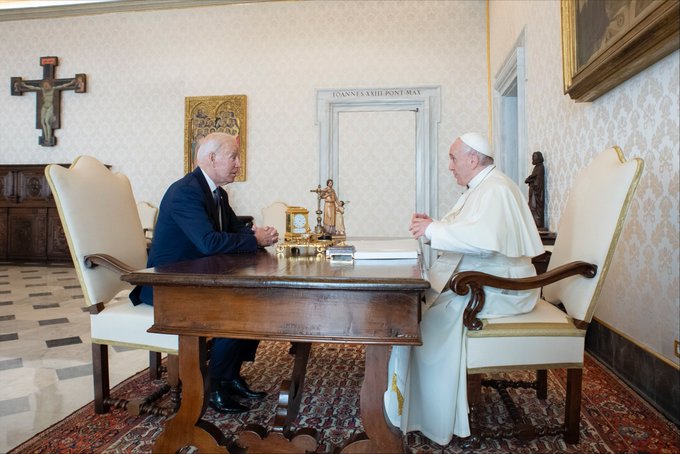 COONS: It’s quite clear that they back this framework, it would not have been announced without their support.

COONS: It’s clear that they back this plan.

THORP: That Manchin and Sinema back this plan?

COONS: I just spoke to both of them.

Jonathan Bernstein: “It’s the core of U.S. democracy, in the best sense possible. It’s imperfect at best, and it’s rarely at its best. But what it’s doing right now? This two-bill convoluted multipart negotiation, with proposals getting added and taken away and some senators refusing to bargain publicly and others seemingly reveling in their key positions and all the rest of it? Perhaps it’s not quite Congress at its best. But there’s a lot of democracy going on.

What we’re seeing here is representatives of the people making decisions on behalf of the nation, and that’s an inherently messy process — at least if it’s going to retain all those influence and access points and respect all the interests that 330 million citizens bring with them. I’ll stick up for Congress as the institution designed to do just that. And I wish that its virtues were just a little bit better appreciated.

There’s something about the legislative process that shows lawmakers for who they really are in a way that campaigns never do.

As Gov. Mario Cuomo famously noted, politicians campaign in poetry, but they govern in prose. What he left out was that many of those elected just aren’t very good writers.

“What’s sort of fun to watch politically is not just their personal struggle, but the American people — with all of this time that goes by — the American people become less and less supportive of what it is that they are setting out to do. And so the political capital that they’re spending, the price is going up.”  — Sen. Kevin Cramer (R-ND), quoted by Politico, on watching Democrats try to pass President Biden’s agenda.

Facebook’s own executives admit to — at least in internal documents — amplifying disinformation, fomenting right-wing violence and even facilitating human trafficking. It’s unsettling that their new strategic vision is to allow you to live virtually inside Facebook.

“After Sen. Richard Burr (R-NC) dumped more than $1.6 million in stocks in February 2020 a week before the coronavirus market crash, he called his brother-in-law,” ProPublica reports.

“They talked for 50 seconds. Burr, according to the SEC, had material nonpublic information regarding the incoming economic impact of coronavirus.”

“The very next minute, Burr’s brother-in-law, Gerald Fauth, called his broker” and “dumped stock the same day Burr did.”

Gen. Mark Milley, the chairman of the Joint Chiefs of Staff, warned Wednesday that China’s test of a hypersonic missile is “very concerning” and “very close” to the kind of “Sputnik moment” that triggered the Space Race during the Cold War, Axios reports.

Janan Ganesh: “That history is ‘one damn thing after another’ is such a good line, it’s almost a shame it isn’t true. For the most part, history is the sum of all that does not happen. The failure of post-apartheid South Africa to succumb to race war is part of history. The failure of most viruses to shut the world down is part of history. The absence of a nuclear strike since 1945, the continuing non-collapse of the EU: each merits as much study as any actual occurrence.”

“The idea of a historic non-event matters, for we are living through a profound instance of one. By far the most striking thing about the pandemic is how little it has changed politics. Across the world, the state has reigned over excess deaths or curbs on freedom, or both. Few have been toppled in consequence. Few have even been made to sweat.”

A Senate committee in Brazil has voted to recommend that President Jair Bolsonaro face charges over his handling of the Covid pandemic, the BBC reports.

President Biden to Pope Francis as he departed their meeting: “God love ya!”

“Members of the House select committee investigating January 6 are losing patience with the pace of talks with former White House chief of staff Mark Meadows, and some are considering whether more aggressive steps are needed to force his compliance in the sweeping probe,” CNN reports.

“After Rep. Jeff Fortenberry (R-NE) was indicted last week for lying to the FBI over foreign donations to his campaign, authorities took the rare step Thursday of trying to prevent the nine-term Republican from tampering with witnesses or handling evidence without supervision,” the Daily Beast reports.

“The order, handed down by Judge Stanley Blumenfield in the U.S. District Court for the Central District of California, also reveals that the government is pursuing multiple related investigations involving other ‘public officials.’”

With paid family leave out of the Build Back Better framework released by the White House yesterday, the U.S. remains one of seven countries without paid leave for new moms, Bloomberg reports.

Wall Street Journal: “Financial incentives, public-health messages and other tactics used by state and local governments and employers to encourage people to get the Covid-19 vaccine didn’t have a noticeable impact on vaccination rates among those who already were hesitant about getting the shot, new research shows.”

Reuters: “Public safety is at the forefront in dozens of major U.S. cities poised to elect mayors on Tuesday. However, a year after ‘defund the police’ became a rallying cry at protests against racism and police brutality, Democratic candidates from Atlanta to Minneapolis are eschewing proposals to reduce police funding even as they emphasize the need for reform.”

“With most urban areas deeply Democratic, the campaigns provide a preview of how Democrats may seek to bridge the gaps between liberals who support policing overhauls and moderates who worry Republicans will weaponize the issue in next year’s congressional elections.”

“House Oversight Committee Chair Carolyn Maloney (D-NY) dropped a political bomb Thursday at the end of a hearing with big-name fossil fuel executives: She’s ready to subpoena them for records of their messaging about climate change,” Politico reports.

Said Maloney: “I have tried very hard to obtain this information voluntarily, but the oil companies employ the same tactics they used for decades on climate policy: delay and obstruction. Well, that ends today.”

Emily Atkin has more on the subpoenas.

North Dakota state Rep. Jeff Hoverson (R) was barred from boarding a flight after he refused to allow a TSA agent to pat him down, KFYR-TV reports.

Said Hoverson: “It got that far, the embarrassment just caused me to just do kind of a natural, impulsive flinch, and move his hand away, and so, that I guess you’re not allowed to do. They called in a lot of supervisors and within a half hour, we were asked to leave, so we did peacefully.”

Reuters: “Trump’s business brand was once synonymous with wealth and success, an image that now clashes sharply with a political brand rooted in the anger of his largely rural and working-class voter base. His presidency is now associated in the minds of many with its violent end, as supporters stormed the U.S. Capitol on Jan. 6.”

“Those searing images, along with years of bitter rhetoric, are costing Trump money. Revenues from some of his high-end properties have declined, vacancies in office buildings have increased, and his lenders are warning that the company’s revenues may not be sufficient to cover his debt payments.”

“Consumer goods giants are funding projects to send plastic trash to cement plants, where it is burned as cheap energy. They’re touting it as a way to keep plastic out of dumps and use less fossil fuel. Critics say it undercuts recycling efforts and worsens air quality,” Reuters reports.

One said it was “like moving the landfill from the ground to the sky.”