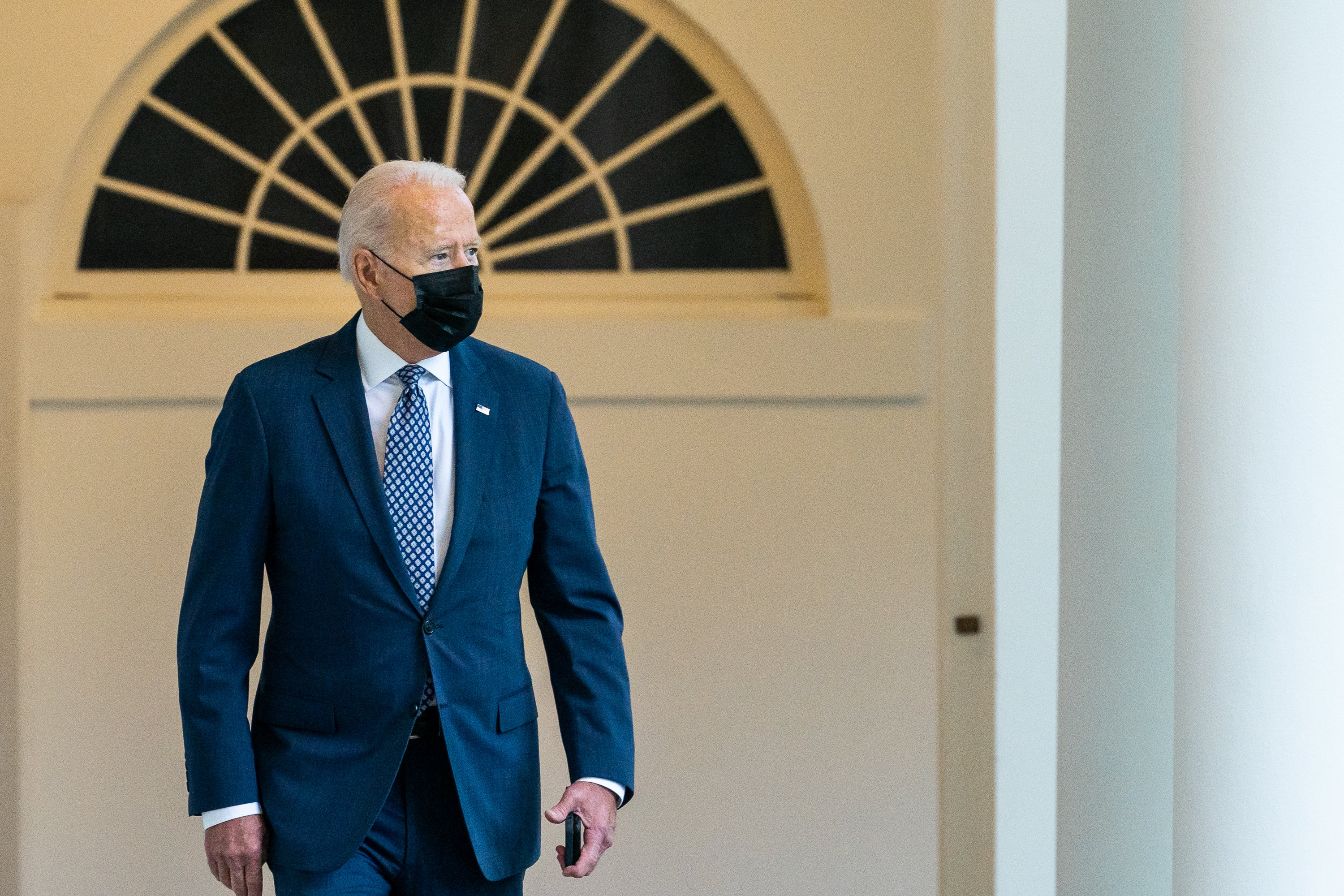 “House Democratic leaders on Thursday abandoned a second attempt to clear the Senate-passed bipartisan infrastructure bill as progressives held firm to their refusal back it without a concrete agreement on a separate social spending package,” The Hill reports.

“It’s the second time House Democratic leadership has punted the bill and it came after President Biden made a rare visit to the Capitol to beseech House Democrats to help him advance his agenda.”

Punchbowl News: “The House will come back next week to try again to advance Biden’s agenda.”

Axios: “Democrats had hoped to to use House approval of the infrastructure bill to boost their candidates in the gubernatorial races in New Jersey and Virginia on Nov. 2.”

Sen. Joe Manchin (D-WV) signaled that he could support the $1.75 trillion price tag for Democrats’ social spending plan, even as he hasn’t said if he supports the overall framework deal, The Hill reports.

“I don’t think it’s hyperbole to say that the House and Senate majorities and my presidency will be determined by what happens in the next week.”  — President Biden, quoted by Axios, to a House Democratic caucus meeting.

“I think we’re gonna be in good shape.”  — President Biden, leaving a meeting of the House Democratic caucus where he pitched his new framework for a budget reconciliation bill.

Rep. Pramila Jayapal (D-WA), the leader of the House progressives, “said Wednesday afternoon on MSNBC she had convinced her members to accept an infrastructure vote without a Senate vote on the reconciliation package — as long as the bills still moved together in the House,” Politico reports.

She also told reporters members of the House progressive caucus are prepared to stay through the weekend.  She added: “We intend to vote for both bills when the Build Back Better Act is ready.”   But she noted “there are too many no votes” for the bipartisan infrastructure bill to pass today.

Just as Democratic lawmakers were asking for the text of President Biden’s new budget reconciliation framework, the House Rules Committee released the text of the 1,684 page bill.

Said Speaker Nancy Pelosi at her news conference: “People say they want to see text. The text is up.”

There are some wins for progressives, but quite a bit was left out from Biden’s original proposal. This change of thinking was telegraphed last night when White House chief of staff Ron Klein retweeted this tweet from Eric Levitz:

“A bill that did nothing but establish universal pre-k, $500 billion in climate funding, and a permanent child allowance kinda seems preferable to the emerging grab-bag of ill-designed, underfunded programs that are all set to self-destruct during the second Trump administration.”

It was a subtle but important sign that the White House needs progressives to back down. And it’s from Klain, who could be considered Biden’s keeper of the liberal flame.

It also reflects this political reality:

The Washington Post reports that many members leaving the House Democratic caucus meeting this morning “are feeling dejected that their priorities were cut from President Biden’s new budget reconciliation framework.” But no one gets everything they want in a negotiation. And everyone got something.

If President Biden’s scaled-back framework is accepted, Democrats will have passed nearly $5 trillion in spending on domestic programs — across a pandemic relief bill, a bipartisan infrastructure bill and a budget reconciliation bill. All of this would happen just 10 months from the two surprise victories in Georgia that gave Democrats tenuous control of the Senate. Literally no one predicted this when Biden won the election a year ago.

So to use Biden’s own words when the Affordable Care Act passed, it would be “a big fucking deal.”

Former President Barack Obama embraced the scaled down budget reconciliation framework released by President Biden, calling it a “giant leap forward” even as some progressives are concerned about what was left out.

“Members of the House select committee investigating January 6 are losing patience with the pace of talks with former White House chief of staff Mark Meadows, and some are considering whether more aggressive steps are needed to force his compliance in the sweeping probe,” CNN reports.

New York Times: “Top Republican lawmakers who are usually mobbed by reporters walk unimpeded through the Capitol corridors while Democrats are chased down for any snippet of the current state of play. The lack of attention has not gone unnoticed.”

Jonathan Bernstein: “One of the most important facts of U.S. politics right now is the terrible shape the Republican Party is in. It has been dysfunctional for more than a decade, and more recently the mainstream of the party has been acting as if they live in a fantasy world.”

“I attended the American Political Science Association’s annual conference in Seattle last month and heard nothing but a string of pessimism about the Republican Party — something that simply was not the case even 10 years ago. Of course, not everyone was pessimistic about the future of the republic. But no one seems to be able to imagine how the Republicans can turn themselves around, and I can’t remember the last political scientist I’ve spoken with (yes, Republicans included) who didn’t see serious problems here.”

“Lawyers for former president Donald Trump urged a federal judge late Tuesday to block the Treasury Department and the IRS from giving his tax returns to the House Ways and Means Committee,” NBC News reports.

Vanity Fair: “Is this because they contain evidence of fraud and other crimes? While we can‘t say for sure, it certainly seems like it, given the way he guards them like state secrets (and, y’know, the reports of him having committed fraud, which he has of course denied).

“As they hunt for revenue to pay for their sprawling spending bill and try to unite a fractured caucus, Democrats are attempting to rewrite the United States tax code in a matter of days, proposing the kind of sweeping changes to how America taxes businesses and individuals that would normally take months or years to enact,” the New York Times reports.

“The effort has effectively discarded trillions of dollars of carefully crafted tax increases that President Biden proposed on the campaign trail and that top Democrats have rolled out in Congress. Instead, lawmakers are throwing a slew of new proposals into the mix, including a tax on billionaires, hoping that they can pass muster both legally and within their own party.”

“A complaint for forcible touching has been filed against former Gov. Andrew Cuomo in Albany City Court,” the New York Times reports.

However, the Albany Times Union reports it was “erroneously issued” and “was issued without the consent of the alleged victim, Brittany Commisso, or her attorney, Brian Premo.”

“Kyrsten Sinema struck an agreement on prescription drug pricing with President Joe Biden as part of Democrats’ social spending talks, though it’s at risk of ultimately being excluded as the party tries to reach a deal that can pass,” Politico reports.

A Democratic aide said they were never party to the Sinema-White House agreement and saw it as a “Trojan horse devised by Big Pharma.”

It was ultimately left out of the framework released yesterday.

Overheard by Playbook: “Reps. Ann Wagner (R-MO) and Michael McCaul (R-TX) were at an event on Capitol Hill last Thursday. Standing by the bar, a person in their group asked about redistricting in Missouri and said he hoped Wagner gets a more conservative district to help her win reelection.”

Said Wagner skeptically: “Then you get those wacko birds.”

To which McCaul said: “That’s why we had to vote the way we did today!”

“That day, House Democrats and nine Republicans voted to hold Steve Bannon in criminal contempt of Congress for ignoring a Jan. 6 committee subpoena. Wagner and McCaul voted against the contempt effort.”

Gross domestic product grew at a 2.0% annualized rate in the third quarter, CNBC reports.   Economists surveyed by the Wall Street Journal estimated that GDP would grow at an annual rate of 2.8% last quarter.

Mother Jones: “When members of right-wing paramilitary groups explain their motivations to the public, they usually give a set of similar, flattering answers—to protect the constitution, to preserve freedom, or defend their community. But a leaked spreadsheet of Oath Keeper members obtained by Mother Jones sheds some light on what they say when they’re just talking to each other.”

“The document contains details on 25,000 people who joined the organization between 2009 and 2015, including their location, contact information and 18,000 self-submitted entries reflecting how they learned of the group or decided to join.”

“The most frequently cited means of discovering the Oath Keepers is Facebook.”

The United States is starting a legal appeal to try to get Wikileaks founder Julian Assange extradited from Britain, the BBC reports.  In January, a court ruled Assange could not be extradited to the U.S. due to concerns over his mental health.

“The row between China and the United States over Taiwan is escalating, with the top US diplomat calling for UN member states to support the island taking part in international bodies,” the South China Morning Post reports.

“Beijing protested to Washington over the remarks by Secretary of State Antony Blinken, saying they would lead to a big disruption in China-US relations.”

Texas state Rep. Matt Krause (R) “has launched an investigation into Texas school districts over the type of books they have, particularly if they pertain to race or sexuality or ‘make students feel discomfort,’” the Texas Tribune reports.

“Krause’s letter provides a 16-page list of about 850 book titles and asks the districts if they have these books, how many copies they have and how much money they spent on the books.”

Rep. Madison Cawthorn (R-NC) called for the formation of a commission to investigate the “true origin” of the coronavirus and the role “demon doctor” Anthony Fauci played in its creation.