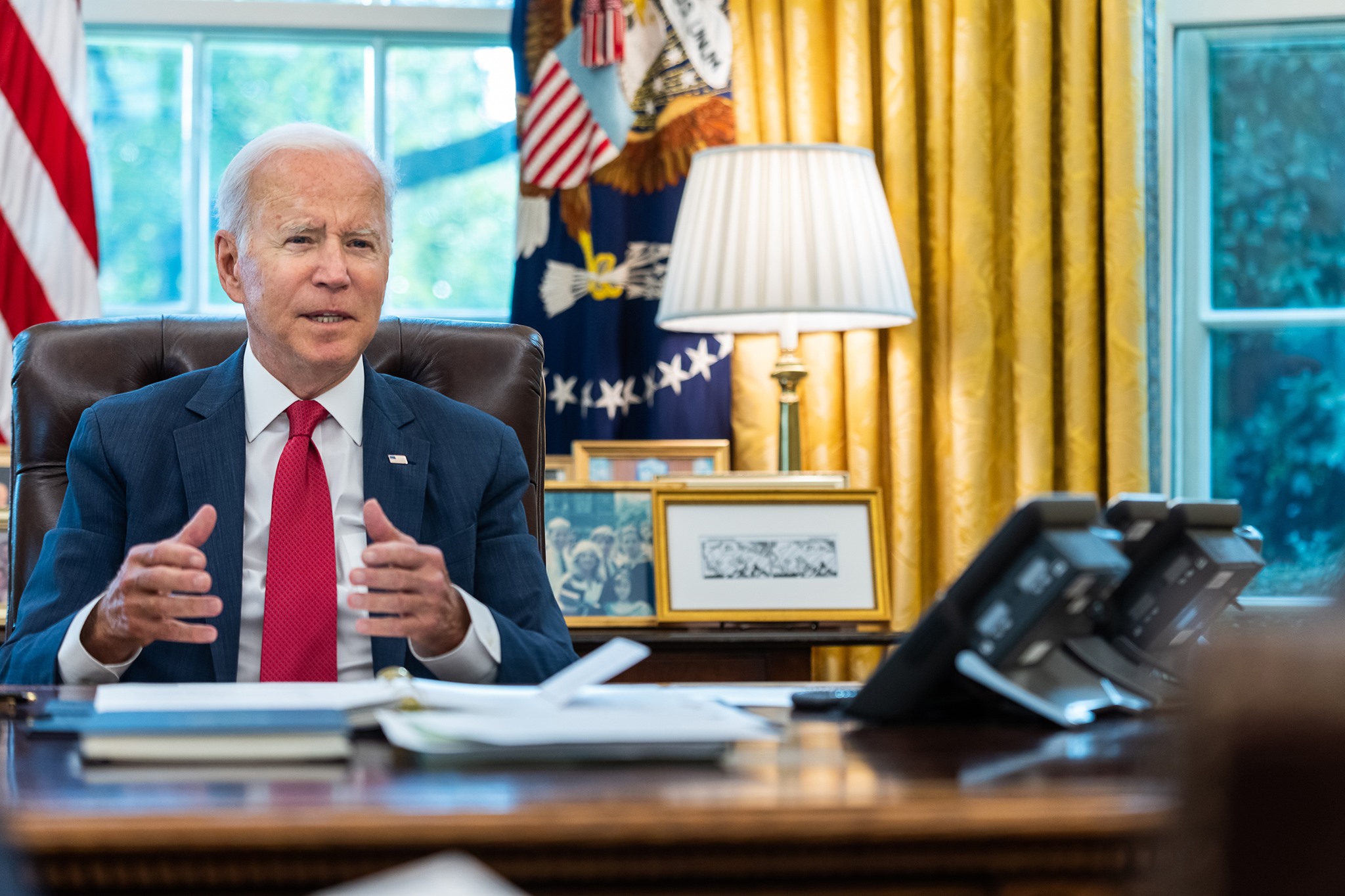 “A price tag of $500-550 billion is a huge number and, if it holds, would likely be the single biggest component of the sweeping package. It also isn’t far off from the roughly $600 billion proposed when the bill was expected to cost $3.5 trillion.”

Punchbowl News: “Democratic leaders on Capitol Hill and in the White House are making progress on a framework agreement for the reconciliation package, although they don’t have a deal yet. A framework agreement could come in the ‘next several hours,’ a Democratic source said. We’ve heard that before, but this time it seems a bit more real.”

“This progress doesn’t mean the reconciliation package is ready to pass, though. It may take some time to finalize the legislative text.”

“In the meantime, Pelosi is trying to get House progressives to go along with a floor vote on the $1 trillion bipartisan infrastructure bill. The deadline for the infrastructure vote is Oct. 31.”

Rep. Pramila Jayapal (D-WA) told reporters that at least “three dozen” members of the progressive caucus want to see a vote on the reconciliation package — not just a framework agreement — before voting on the bipartisan infrastructure bill, Politico reports.

Said Jayapal: “And that number is only increasing.”

Speaker Nancy Pelosi is reportedly trying to get a vote on the infrastructure bill ahead of the bigger bill.

House Democrats have scheduled an in-person meeting at 9 am ET tomorrow, presumably to discuss the budget reconciliation and bipartisan infrastructure negotiations.

“Sen. Kyrsten Sinema (D-AZ) voiced support for a proposal for a minimum tax on corporate profits as her party weighs the measure as a potential revenue raiser for its sweeping social spending plan,” The Hill reports.

“Senate Democrats detailed a 15% minimum tax on large companies’ income on Tuesday, refreshing an earlier revenue-raising proposal as they try to generate enough money to pay for President Biden’s social-spending and climate-change agenda,” the Wall Street Journal reports. “The plan is designed to raise money from companies without raising the 21% corporate income-tax rate.”

Sen. Joe Manchin (D-WV) told Politico that a deal on the budget reconciliation “absolutely” can be reached today. Manchin predicted “I think we’ll get a framework” but warned “the devil is in the details,” The Hill reports.

A “very irritated” Sen. Bernie Sanders (I-VT), when asked if there would be a budget reconciliation agreement told Politico: “I don’t know. But I don’t think so.”

He went on: “I’m not quite clear in terms of the revenue package. Every sensible revenue option seems to be destroyed. Should we raise corporate tax rates, personal income taxes for the very wealthy? Of course, we should. But at least one person in the caucus doesn’t want to do that. Should we demand that the billionaires have to pay their fair share of taxes? Yes. There’s another person who doesn’t want to do that. So it seems to me almost every sensible progressive revenue option that the president wants and the American people want, and that I want, seems to be sabotaged.”

Explained Sen. Joe Manchin (D-WV): “I’m talking to everybody, but I’ve been very clear: to expand social programs, when you have trust funds that aren’t solvent — they’re going insolvent — I can’t explain that… It doesn’t make sense to me… I just can’t do it.”

“The U.S. is the only wealthy nation without a national paid leave policy.”

Manchin is telling colleagues he has deep concerns about a proposed “billionaire tax” but is waiting for more details before making a final decision, Axios reports.

“The senator’s doubts reveal an uncomfortable truth for the White House and congressional leaders as they race to finish — and pay for — their nearly $2 trillion social spending and climate package: A tax solution designed to satisfy Sen. Kyrsten Sinema (D-AZ) isn’t necessarily acceptable to Manchin.”

House Ways and Means Chair Richard Neal (D-MA) said “a proposal to put a levy on the assets of billionaires has been dropped in negotiations over revenue measures to pay for President Joe Biden’s social-spending bill,” Bloomberg reports.

“The House is discussing with the Senate instead inclusion of a 3% surtax, on top of the top income rate, for those earning more than $10 million.”

Playbook: “President Joe Biden was hoping to announce a deal on his legislative agenda before he heads to Europe on Thursday. But it’s Wednesday already, and so far this week, it’s been two baby steps forward, one giant leap backward for Democrats. We’re not saying a deal won’t materialize; odds are it will — eventually.”

“We are just missing two things: What exactly is going to be in the bill and how we’re going to pay for it? Other than that, we are good to go.”  — Rep. Brendan Boyle (D-PA), quoted by Bloomberg.

“Facebook has told employees to ‘preserve internal documents and communications since 2016’ that pertain to its businesses because governments and legislative bodies have started inquiries into its operations,” the New York Times reports.

“The move, known as a ‘legal hold,’ follows intense media, legal and regulatory scrutiny over the social network’s harms.”

Dan Pfeiffer: “It is hard to conjure another private citizen or company who has hurt more people in recent memory than Mark Zuckerberg and Facebook. This is not my view. Or the view of reporters and anti-Facebook activists. According to the documents, the most dire warnings about the dangers of Facebook are coming from Facebook employees concerned about their inability to control the monster they helped create.”

“While reading these stories, I can’t help but worry that despite the furor against Facebook, the moment will pass and little to no action will be taken; and while Facebook is weakened by this public outrage, Mark Zuckerberg and his minions will continue to make gobs of money destroying American democracy and sowing anger and dissent across the planet.”

“A federal judge this week ordered Rep. Devin Nunes’ family members to disclose how they are paying for their defamation lawsuit against a reporter and magazine publisher over a 2018 story about their Iowa farm,” the Sacramento Bee reports.

“Iran will return to nuclear talks before the end of November, its chief negotiator, Ali Bagheri, said on Wednesday, paving the way for the first talks since June on restoring the 2015 nuclear deal,” the Wall Street Journal reports.

“U.S. and European hopes of reviving the nuclear deal have faded sharply in recent months since hard-line Iranian President Ebrahim Raisi took office. Iran had repeatedly said it would continue the negotiations but refused to set a date.”

“President Biden — who has made renewed international engagement a hallmark of his foreign policy ethos — is headed to a pair of global summits in Europe this week with just a handful of his ambassadors in place, as most of his picks to represent the United States abroad remain mired in messy domestic politics,” the Washington Post reports.

“To date, only four of Biden’s choices to be a U.S. ambassador to a foreign government have been approved by the Senate — three of them just on Tuesday. That means Biden is lagging considerably behind his immediate predecessor, Donald Trump, who at this point in his presidency had 22 such U.S. ambassadors confirmed, 17 of them by voice vote.”

“The delays stem from threats by some Republican senators, led by Ted Cruz (R-TX), who has been angling for a fight with the Biden administration over matters of national security.”

“Congressional investigators are preparing to seek testimony from John Eastman, the attorney who crafted a legal strategy to help Donald Trump try to overturn the 2020 election results on Jan. 6,” Politico reports.

John Eastman, the lawyer who wrote the infamous memo on how Donald Trump could overturn the 2020 election, was caught on video saying that Vice President Mike Pence didn’t take his solid legal advice because Pence is “an establishment guy.”

Just last week, Eastman walked back the memo in an interview saying it would have been “crazy” to pursue.

Said Birz: “I believe if we had fully implemented the mask mandates, the reduction in indoor dining, the getting friends and family to understand the risk of gathering in private homes, and we had increased testing, that we probably could have decreased fatalities into the 30 percent less to 40 percent less range.”

“Nearly every component of the traditional American Thanksgiving dinner, from the disposable aluminum turkey roasting pan to the coffee and pie, will cost more this year,” the New York Times reports.

“There is no single culprit. The nation’s food supply has been battered by a knotted supply chain, high transportation expenses, labor shortages, trade policies and bad weather. Inflation is at play, too.”

“Multiple bills proposed for a three-day special legislative session this week would allow students and their parents to forgo legally mandated vaccines to attend public or private K-12 schools in Wyoming. One of them is backed by a joint committee,” the Casper Star Tribune reports.

“The proposed legislation would… allow parents or legal guardians to request exemptions without any rationale beyond it being their personal choice.”

“California has given away at least $20 billion to criminals in the form of fraudulent unemployment benefits, state officials said Monday, confirming a number smaller than originally feared but one that still accounts for more than 11% of all benefits paid since the start of the pandemic,” the Los Angeles Times reports.

“State officials blamed nearly all of that fraud on a hastily approved expansion of unemployment benefits by Congress that let people who were self-employed get weekly checks from the government with few safeguards to stop people who were not eligible to receive them.”

“A notorious Russian cybercriminal group has posted what appear to be National Rifle Association files to the dark web,” NBC News reports.

“The group, known as Grief, posted 13 files to its website Wednesday and claimed to have hacked the NRA. It is threatening to release more of the files if not paid, though it did not publicly state how much.”