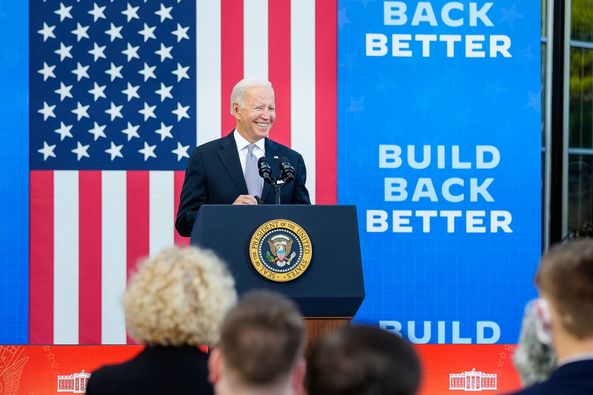 A new VCU poll in Virginia finds Terry McAuliffe (D) just ahead of Glenn Youngkin (R) in the race for governor, 43% to 40%.

A new USA Today/Suffolk poll in Virginia shows Terry McAuliffe (D) and Glenn Youngkin (R) tied in the race for governor, 45% to 45%.

For comparison, the FiveThirtyEight polling average has McAuliffe up by 1.7 percentage points.

“Murphy, however, does not mention in the ad that her son was a high school senior at the time and that the book in question, assigned as part of his Advanced Placement English curriculum, was Beloved, the vivid and wrenching novel about slavery in America that won the 1988 Pulitzer Prize for fiction.”

Playbook: “Unlike past White Houses, Biden isn’t trying to play down how much Virginia’s gubernatorial race matters for his political standing and agenda. The president is leaning in for better or worse on the eve of his campaign trip to Arlington.”

Jonathan Chait: “If Terry McAuliffe holds on to defeat Glenn Youngkin in the Virginia governor’s race, a large number of Republicans will blame Donald Trump. McAuliffe has assiduously tied Youngkin to Trump. Youngkin has followed a careful strategy of appealing to both Trump cultists and moderates. Should he lose, it would be a proof point that blue-state Republicans can’t keep a foot in both camps. They would have to denounce the former president more forcefully to gain the credibility they need to win statewide office, a step that would erode Trump’s influence over the party.”

IOWA REDISTRICTING. Iowa’s nonpartisan Legislative Services Agency has released a second set of congressional and legislative maps after Republican lawmakers rejected the agency’s first batch of proposals earlier this month. However, as redistricting expert Michael McDonald notes, the plans may run afoul of Iowa statutes that call for “reasonably compact districts” that are “square, rectangular, or hexagonal in shape.” Under state law, compactness is measured by comparing a district’s length to its width (with smaller differences being more desirable) and by calculating the length of a district’s perimeter (the shorter the better).

Legal infirmities aside, if Republicans spurn these latest maps, the LSA would produce a third set. However, the legislature would be free to amend those maps freely, allowing the GOP to gerrymander to whatever extent they desire. While compactness and shape requirements might hinder them, Republicans could simply repeal those laws as well.

MASSACHUSETTS REDISTRICTING. Massachusetts’ Democratic-run state House has passed a new map for its own chamber with 158 members voting in favor and just one against—a lopsided margin that tells us the new districts are an incumbent protection gerrymander designed to insulate members of both parties from challenges, whether in a primary or general election. The plan now goes to the Senate, which recently introduced its own map but has yet to take action on it.

“The campaigns and outside groups for Democratic Gov. Phil Murphy and Republican rival Jack Ciattarelli have spent $45,871,086 in the general election, nearly twice as much as what was shelled out about this time four years ago,” NJ.com reports.

MONTANA REDISTRICTING. Montana’s bipartisan redistricting commission  whittled down the number of congressional maps it’s considering from nine to two on Thursday, with one proposed by Democrats and the other by Republicans. If no agreement can be reached on how to draw the state’s two districts, the impasse would be resolved by the commission’s tiebreaking member, attorney Maylinn Smith.

Smith said she’d prefer the two sides reach a compromise, and she also criticized both maps for different reasons. However, she also expressed a strong preference that one of the two districts favor neither party, which ultimately ought to incline her toward the Democrats’ plan, since it would establish a western district that’s more competitive than the one put forth by the GOP.

NORTH CAROLINA REDISTRICTING. Republicans in North Carolina’s state House have put out a draft map for the chamber, following the recent release of proposals for Congress and the state Senate.

WEST VIRGINIA REDISTRICTING. Republican Gov. Jim Justice signed West Virginia’s new congressional and legislative maps on Friday, two days after the Republican-run legislature passed maps for the state Senate and House. Lawmakers had approved a congressional plan a week earlier. While Republican dominance remains unquestioned in this extremely red state, the state House map underwent significant changes due to a 2018 law mandating that its 20 multi-member districts—which were home to 53 of the chamber’s 100 delegates—be replaced with constituencies that will elect just one member each.

ALABAMA REDISTRICTING. Alabama’s Republican-run legislature released draft congressional and legislative maps on Monday. The congressional map would retain six Republican seats and one majority-Black Democratic district, the 7th, though since the state’s population is about two-sevenths African American, it could easily sustain a second Black district. It’s a certainty, however, that Republicans would not draw such a district, and it’s unlikely that the extremely conservative federal judiciary would find that the Voting Rights Act requires them to do so in a lawsuit filed last month seeking to compel such a district.

ILLINOIS REDISTRICTING. Illinois Democrats have released a second draft congressional map that differs from their first proposal in a number of key ways.

It’s still an aggressive gerrymander that would in all likelihood send 14 Democrats and three Republicans to Congress, but it shores up two Democratic districts that were somewhat marginal in the first map: The 14th would go from a 53-45 win for Joe Biden to a 55-43 Biden victory, per Dave’s Redistricting App, while the 17th would shift from 52-46 for Biden to 53-44. However, while mapmakers strung together several blue cities in the 17th District to ensure it leans Democratic, they still left some blue turf in several of those cities in neighboring red districts instead, likely to minimize the number of split counties. (They did the same in the 13th, about which more below.)

A third Democratic seat that could have been at-risk under the initial plan, the Chicago-area 3rd, would be radically reconfigured into a plurality Latino district that would have gone for Biden 68-30 instead of 52-46. As a result, Democratic Rep. Marie Newman and Sean Casten would likely wind up paired in the revamped 6th District, though most of it would be new turf to both: Newman would represent about 40% of the new 6th while Casten would represent about 25%. The map might also induce Republican Rep. Rodney Davis to run in the considerably redrawn 15th District, a deliberate GOP vote-sink, rather than in his 13th District, which would (as in the first draft) have voted 55-43 for Biden.

TEXAS REDISTRICTING. As expected, Gov. Greg Abbott signed Texas’ new congressional and legislative maps into law on Monday, a week after his fellow Republicans in the legislature finalized them. All three maps will lock in gerrymandered GOP majorities for years to come, even if Republican candidates fail to win a majority of the vote, at the expense of the state’s large and growing Black, Latino, and Asian American populations. Latino voting rights advocates had already filed a federal lawsuit challenging the new districts for discriminating against their communities even before Abbott approved them.

VIRGINIA REDISTRICTING. “When Virginia voters amended their state constitution to create a bipartisan redistricting commission, they thought they were ending the partisan squabbling that plagued the state’s redistricting process for centuries. Instead, they may have made it worse,” Slate reports.

“The Virginia commission—added to the state constitution by legislative approval followed by a referendum in 2020—was supposed to establish a fair, transparent process that discouraged politicking and incentivized compromise. It shifted power over the creation of new maps from the General Assembly (which Democrats now control) to a 16-member commission made up of eight legislative leaders and eight citizens. Both groups are evenly split between Democrats and Republicans. The commission must draw compact districts that do not favor any political party, and may adopt new maps only with supermajority support from both the legislators and citizens.”

“If the commissioners can’t reach an agreement, the Virginia Supreme Court—where conservative justices currently hold a majority—draws the maps.”

“The Macomb County Republican Party is on-board with former President Donald Trump’s assertions that 2020 presidential election was stolen from him as they released a statement saying his loss was ‘the culmination of a four-year coup,’” the Macomb Daily reports.

Republicans in the Wisconsin state Senate announced “they were launching a review of a recently completed audit of the 2020 election, just days after one of their members said the audit had shown voting had been safe and secure,” the Milwaukee Journal Sentinel reports.

“A Republican secretary of state who challenged former President Donald Trump’s false claims of election fraud in 2020 is the front-runner for a job heading the Biden administration’s effort to protect future elections,“ the AP reports.

“Kim Wyman has led elections in Washington state for years, and she was reelected to a third term in November — the lone statewide-elected Republican on the West Coast. She is in talks to serve as the election security leader for the Department of Homeland Security’s Cybersecurity and Infrastructure Security Agency, the agency responsible for safeguarding U.S. elections.”

Internal polling for House Republicans in 85 potential battleground districts has them surging with independent voters and leading Democrats on a generic ballot for the first time this cycle, 43% to 40%, Politico reports.

“Republicans are carrying independent voters by 8 points in the survey and college-educated white voters by 3 points.“

A new Axios/Ipsos poll finds that just 44% of Americans said they are confident that President Biden can ensure a quick economic recovery from the pandemic — down from 52% in January.

“Campaign committees for Rep. Adriano Espaillat (D-NY) have paid nearly $15,000 to bloggers for posting hundreds of flattering articles dating to his first run for Congress in 2016,” The City reports.

“The bloggers’ posts do not disclose their financial ties with the Espaillat campaign — exploiting a legal gray area as paid social media influencers play a growing role in campaigns nationally.”

Vice News spoke with over a dozen election officials who had experienced death threats and felt endangered during the 2020 election period.

“Officials across the United States experienced physical stalking, explicitly violent phone calls, racial slurs, home surveillance, bomb scares, and threats of mass shootings. For some officials in Georgia and Pennsylvania, the threats have continued for nearly a year. And now, many of these officials want to quit.”