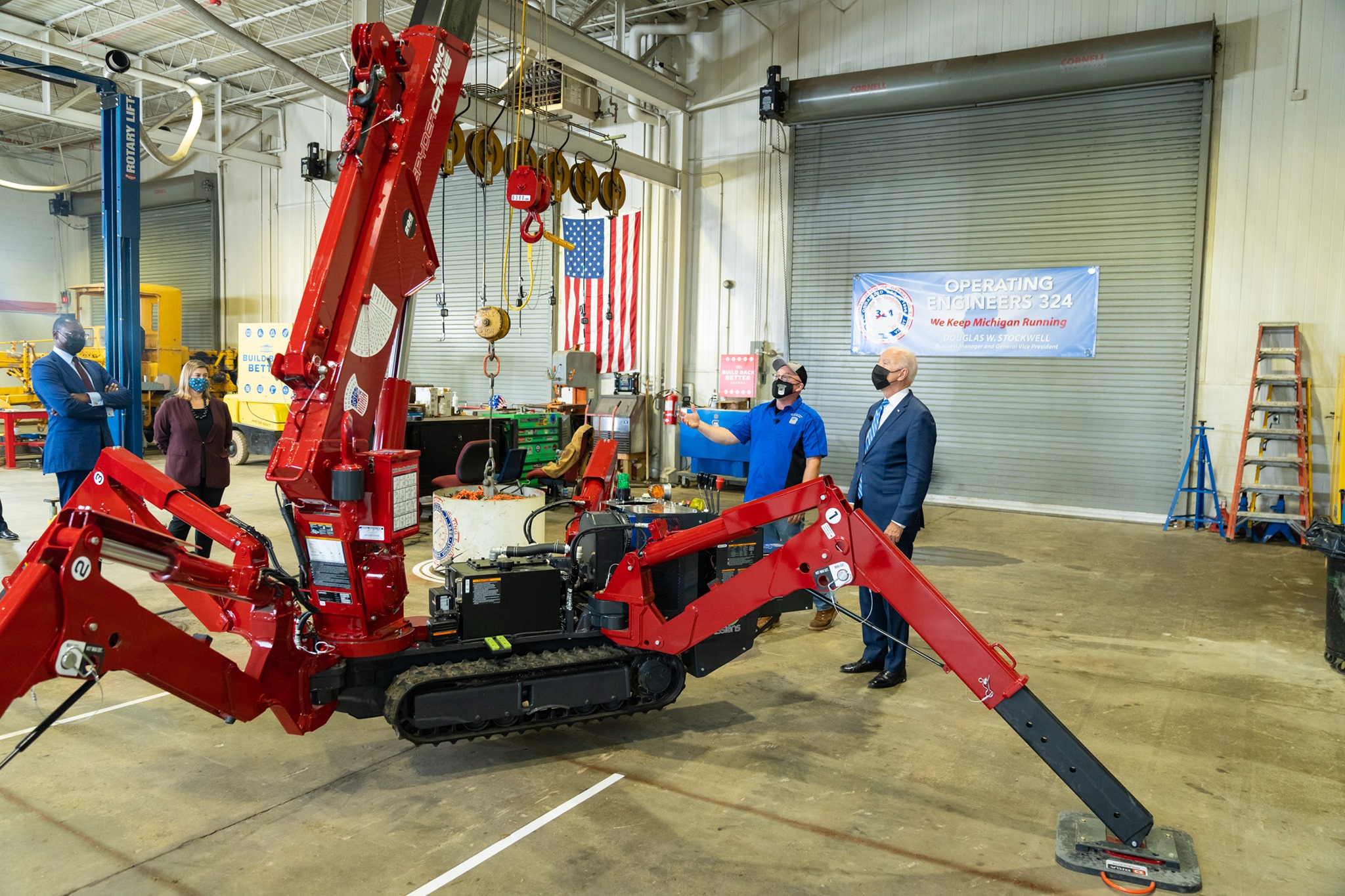 “The 88-point partisan gap in job approval is the largest for Biden thus far in his presidency and ranks among the largest in more than eight decades of Gallup measurements of presidential approval. Donald Trump is the only president to receive more politically polarized approval ratings, having done so on several occasions, including a record 92 points just before the 2020 election.”

“President Joe Biden on Monday kicks off a crucial week for the future of his spending plans by traveling to New Jersey, where he will tout his proposals and share the spotlight with Gov. Phil Murphy (D) a week before Election Day,” NJ.com reports.

WISCONSIN REDISTRICTING. Republican leaders in Wisconsin’s legislature released new congressional and legislative maps late on Wednesday, all of which are extreme gerrymanders that, according to the nonpartisan site PlanScore, would give the GOP three-quarters of the seats in the House and two-thirds of those in the legislature—despite the fact that Joe Biden carried the state last year. Democratic Gov. Tony Evers immediately threatened to veto the proposals unless Republicans “do better,” but since there’s virtually no way they will, redistricting will head to the courts.

Both sides have long anticipated this development and filed separate lawsuits earlier this year. Republicans are hoping to have the impasse resolved by the state Supreme Court, where a partisan conservative majority usually holds sway. Democrats, meanwhile, believe they can get a more favorable hearing in the federal courts and have brought suit there.

ARIZONA U.S. SENATOR. Ordinarily, we don’t cover elections that are more than two years off, but the blaze under Kyrsten Sinema right now is burning so intensely that we simply have to note that, for the first time, Democratic Rep. Ruben Gallego is not ruling out a primary challenge to Arizona’s senior senator in 2024. A recent poll from the progressive firm Data for Progress found Gallego destroying Sinema by a monster 62-23 margin in an extremely hypothetical matchup, though of course, three years is an eternity in politics—or any walk of life, really. (What are your plans for the fall of ’24?)

While there’s already a crowdfunded effort to raise money for an unnamed Sinema opponent, the most effective thing progressives can do right now is to ensure that Arizona’s other senator, Democrat Mark Kelly, wins re-election next year. A Kelly victory will show that the state’s leftward shift was not just a brief Trump-era fluke and will ensure a much greater appetite for a campaign against Sinema from grassroots donors, liberal organizations, and potential candidates—including, perhaps, Gallego himself.

NEBRASKA GOVERNOR. Former state Sen. Theresa Thibodeau told WOWT this week that she’s considering seeking the Republican nomination in next year’s open seat race, a move that would put her directly in conflict with the person who was her running mate just months ago. In a separate interview with the Omaha World Herald, she said that she expects to decide in three to five weeks.

In Nebraska candidates for governor and lieutenant governor compete as a ticket in primaries, and agribusinessman Charles Herbster announced in April that his second-in-command would be none other than Thibodeau. The former state senator, though, said in July she was dropping out because of undisclosed “potential opportunities that would conflict with the campaign,” adding, “At this time, I do not feel I will be able to devote the needed time to the campaign.” Thibodeau now says that matter has been taken care of and she has the time to run for office now that she’s sold her day care.

Thibodeau earned her seat in the legislature in 2017 when Gov. Pete Ricketts appointed her to fill a vacancy in an Omaha area constituency. Her tenure in the officially nonpartisan chamber proved short, though, as she lost the next year to Machaela Cavanaugh, who campaigned as a Democrat, 51-49.

WISCONSIN GOVERNOR. Unnamed sources tell the ​​Milwaukee Journal Sentinel that former Rep. Sean Duffy is now considering seeking the Republican nomination for governor following Donald Trump’s unprompted weekend not-tweet urging him to do so, though they disagree how likely it is the fledgling New Jersey resident will return to the state he just left.

One contact close to Duffy says, “He is definitely thinking about it. He’s talking with family and friends and will make a decision soon,” continuing, “He obviously has not knocked down the suggestion — he’s taking it seriously.” Another person, though, says the former congressman is not “particularly serious” about taking on Democratic Gov. Tony Evers. “I think it’s mostly a case of, when something like this happens, you have to pause and stew on the idea for a little bit,” this person added.

PENNSYLVANIA FIRST CD. Navy veteran Paul Fermo said this week that he would seek the Democratic nomination to take on Republican Rep. Brian Fitzpatrick in what is currently a swing seat centered around Bucks County in the Philadelphia suburbs. Fermo joins a primary that includes Army veteran Ashley Ehasz, who launched her own campaign last week.

PENNSYLVANIA EIGHTEENTH CD. The National Journal reports that attorney Steve Irwin, a longtime Democratic fundraiser who is a former head of the Pennsylvania Securities Commission, is considering seeking the nomination to succeed retiring Rep. Mike Doyle and could decide next week. Irwin back in August set up an exploratory committee for a possible 2022 run for lieutenant governor.

KENTUCKY THIRD CD. Former newspaper publisher Aaron Yarmuth announced on Thursday that he would not seek the seat being left open by his father, Democratic Rep. John Yarmuth, who recently said he would retire from Congress.

On the Republican side, state Sen. Julie Raque Adams, reportedly a favorite of the state’s GOP establishment, has taken herself out of contention. Another Republican, Secretary of State Michael Adams, had said he’d only run if Julie Raque Adams (no apparent relation) did not. Given the district’s deep blue hue (it voted for Joe Biden 60-38 last year), it’s probable that a prominent GOP candidate will run only if legislative Republicans try to dismantle this seat via gerrymandering—something they might well do.

OHIO FIFTEENTH CD. Democratic state Rep. Allison Russo and Republican lobbyist Mike Carey turned in similar fundraising reports ahead of the Nov. 2 special election for Ohio’s vacant 15th Congressional District, covering the period from July 15 through Oct. 13. Russo raised $550,000, spent $566,000, and had $181,000 left over, while Carey brought in $546,000, spent $454,000, and had $177,000 in the bank for the stretch run. Carey is still the overwhelming favorite to win, though, given the strong conservative lean of the district, which voted for Donald Trump by a 56-42 margin last year.

PENNSYLVANIA SEVENTEENTH CD. Businesswoman Tricia Staible, a Republican who runs what the Pittsburgh Post-Gazette characterizes as a “mainstay family-run industrial fan manufacturer,” has kicked off a bid to succeed Democratic Senate candidate Conor Lamb in what is currently a swingy seat in the Pittsburgh suburbs. The only other notable candidate so far is Navy veteran Chris Deluzio, a Democrat who raised $258,000 during his first five weeks in the race and ended September with $152,000 on-hand.

SOUTH DAKOTA AT LARGE CD. State Rep. Taffy Howard declared earlier this month that she would challenge Rep. Dusty Johnson, who represents the entire state, in next year’s Republican primary. While Howard didn’t initially mention the incumbent in her announcement, she later argued that Johnson hadn’t done enough to support what she called “election integrity” in the wake of Donald Trump’s defeat. Howard also trashed Johnson for previously voting to keep Wyoming Rep. Liz Cheney as GOP conference chair after she voted to impeach Trump.

Johnson has been a fairly low-key but ardently loyal Trump supporter since he was first elected in 2018, while Howard has established herself as a conservative zealot. This year, she loudly complained after Republican Gov. Kristi Noem vetoed an anti-trans bill. Howard also picked a fight with the governor when she sponsored an unsuccessful bill that would have required Noem, who is a potential 2024 presidential candidate, to disclose the security costs of her out-of-state trips.

Johnson, who won renomination last year by turning back former state Rep. Liz Marty May 77-23, raised $220,000 during the third quarter of 2021 and ended last month with $1.7 million on-hand. Howard, meanwhile, filed FEC paperwork in early August and went on to raise $85,000 for the quarter; she finished September with $75,000 in the bank.

TEXAS EIGHTH CD. Ted Cruz has endorsed former Kevin Brady campaign manager Christian Collins in the Republican primary for Texas’ 8th Congressional District, which is open due to Brady’s retirement. Under the GOP’s newly passed congressional map, the Houston-area 8th will move decidedly to the left, but because it’s so blood-red, it will remain deeply conservative: The new version would have gone 63-36 for Donald Trump, as opposed to 71-28 under the old lines. Republicans gerrymandered the lines in order to make the neighboring 10th and 17th Districts considerably redder and insulate potentially vulnerable GOP incumbents from ongoing demographic changes.

VIRGINIA SEVENTH CD. State Sen. Bryce Reeves announced Friday that he would join the Republican race to challenge Democratic Rep. Abigail Spanberger in the 7th District. This suburban Richmond seat is currently swingy turf, but no one knows what it will look like next year especially now that the state’s redistricting commission has all but confirmed that it would punt its work to the Virginia Supreme Court.

Reeves won his seat by unseating a Democratic incumbent by 226 votes right after the 2011 round of redistricting, a tight win that flipped control of the chamber to the GOP. He then sought a promotion in 2017 when he ran for lieutenant governor, but he lost a truly ugly primary to fellow state Sen. Jill Holtzman Vogel 43-40.

The GOP field currently includes Tina Ramirez, who lost last year’s nominating convention to take on Spanberger; communications consultant Taylor Keeney; and John Castorani, who took less than 2% of the vote in 2020’s primary for Alabama’s 1st Congressional District. Ramirez raised $345,000 last quarter and ended September with $250,000 available. Castorani, meanwhile, actually edged out Keeney $164,000 to $161,000 in fundraising, though Keeney still had a $100,000 to $50,000 cash-on-hand lead. Spanberger, for her part, hauled in $755,000 and had $2.4 million in the bank.