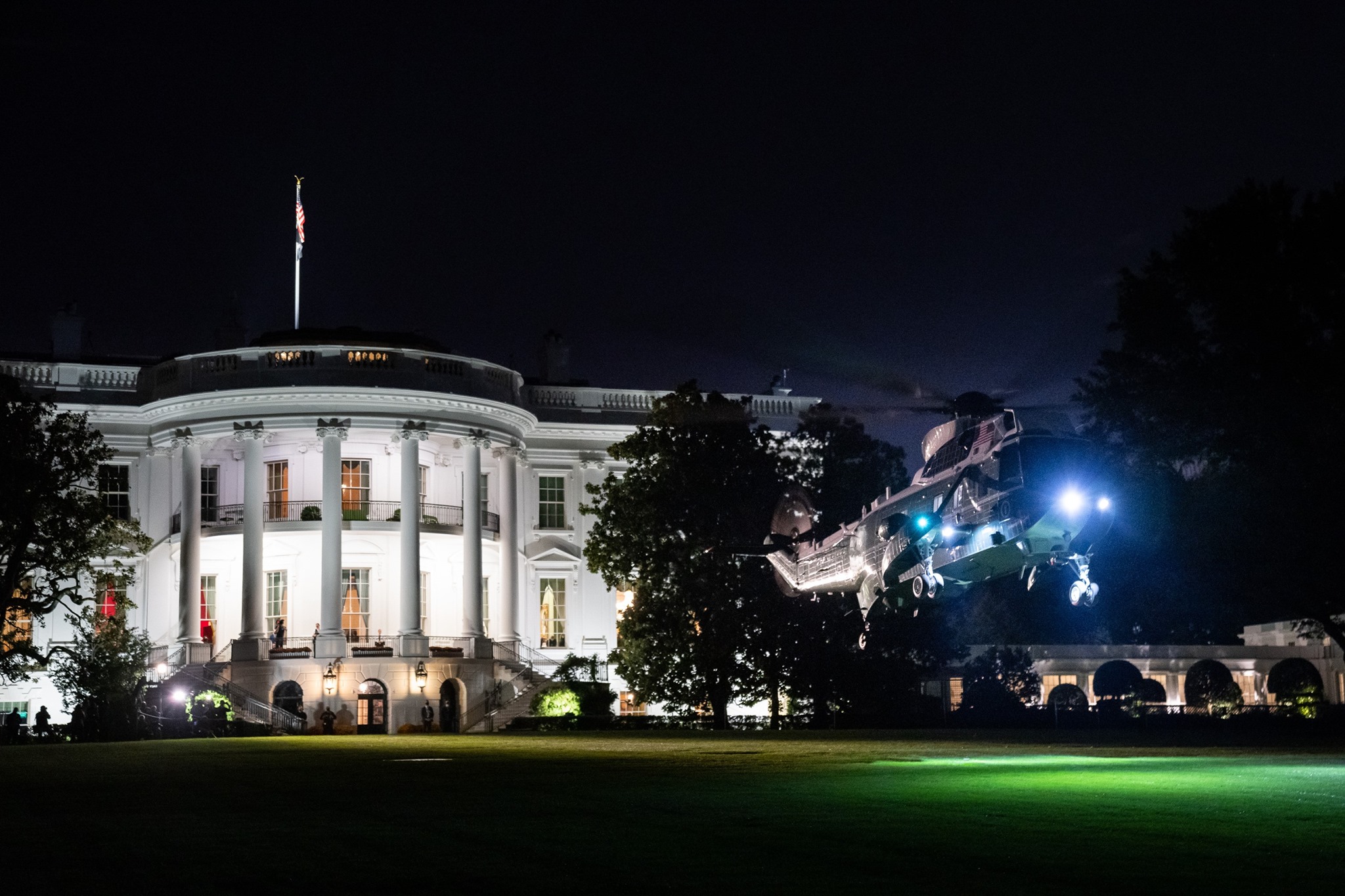 Punchbowl News: “Democratic leaders on Capitol Hill are planning a big week. Their goal is for the House to vote on the $1 trillion bipartisan infrastructure bill and reach an agreement on the outlines of the Democrats’ massive reconciliation bill, the Build Back Better Act.”

“Whether all this happens remains to be seen. But it’s going to be a frantic few days.”

Playbook: “The next nine days are the most important of Biden’s young presidency: He needs to rescue his legislative agenda in Congress, rescue his party’s political candidates in two states and rescue America’s leadership on climate policy in Scotland.”

Punchbowl News: “The White House and Democratic leaders hope to get a vote on the $1 trillion bipartisan infrastructure bill this week. Right now, we’d put the odds at 50-50 — at most. There are massive issues on the Democrats’ reconciliation package that need to be closed out, a tax proposal that needs to be written and still, we will note, no agreement on the topline spending figure.”

“One other point — If you want to pass an important bill by, let’s say, Wednesday, you needed to have started whipping it already. Like yesterday. And so far, there’s no whipping on BIF due to the lack of a reconciliation framework. We’re not saying it can’t be done. But we’re saying that if you’re going to do it, you need to start pronto.”

“The House Republican leadership believes that fewer than 10 of its lawmakers will vote for this infrastructure bill.”

Sen. Joe Manchin (D-WV) said that he believed Democrats “should” be able to get a deal on a framework agreement for President Biden’s social spending bill this week, The Hill reports.

Said Manchin: “Having it finished with all the t’s and the i’s and everything you know crossed and dotted that will be difficult from the Senate side because we have an awful lot of text to go through, but as far as conceptually we should, I really believe.”

Also newsworthy from Politico: Manchin said he’s still at $1.5 trillion for the size of the package.

“A new annual tax on billionaires’ unrealized capital gains is likely to be included to help pay for the vast social policy and climate package lawmakers hope to finalize this week,” the Wall Street Journal reports.

“The tax is expected to affect people with $1 billion in assets or $100 million in income for three consecutive years.”

“As the House investigation into the Jan. 6 attack heats up, some of the planners of the pro-Trump rallies that took place in Washington, D.C., have begun communicating with congressional investigators and sharing new information about what happened when the former president’s supporters stormed the U.S. Capitol,” Rolling Stone reports.

“Two of these people have spoken to Rolling Stone extensively in recent weeks and detailed explosive allegations that multiple members of Congress were intimately involved in planning both Trump’s efforts to overturn his election loss and the Jan. 6 events that turned violent.”

“Rolling Stone separately confirmed a third person involved in the main Jan. 6 rally in D.C. has communicated with the committee. This is the first report that the committee is hearing major new allegations from potential cooperating witnesses. While there have been prior indications that members of Congress were involved, this is also the first account detailing their purported role and its scope. The two sources also claim they interacted with members of Trump’s team, including former White House Chief of Staff Mark Meadows, who they describe as having had an opportunity to prevent the violence.”

“Rep. Alexandria Ocasio-Cortez (D-NY) has called for the expulsion of any member of Congress who helped plan the storming of the U.S. Capitol after a bombshell report alleged that several Republican lawmakers had co-ordinated with rally organizers,” Newsweek reports.

Rep. Mo Brooks (R-AL) told the Montgomery Advertiser that he did not help plan a Jan. 6 rally that preceded an attack on the U.S. Capitol that involved the deaths of at least five people and injuries to hundreds more.

Said Brooks: “If you’re talking about someone participating in meetings, setting the agenda, raising the money, I don’t know of anything that suggests my staff as doing that stuff.”

Brooks said he only spoke at the rally because the White House asked him to do so the day before.Brooks did plan ahead to wear body armor to the rally.

“Stockton previously drew national media attention for his connection to We Build The Wall, a crowdfunding effort that purported to raise money to construct a wall on the border between the U.S. and Mexico.”

“Facebook’s senior executives interfered to allow US politicians and celebrities to post whatever they wanted on its social network despite pleas from employees to stop, leaked internal documents suggest,” the Financial Times reports.

“Employees claim in the documents that while Facebook has long insisted that it is politically neutral, it allowed rightwing figures to break rules designed to curb misinformation and harmful content, after being stung by accusations of bias from conservatives.”

Florida Gov. Ron DeSantis (R) said that he is looking to enact legislation that will provide a $5,000 bonus to police officers to relocate to Florida, where they can avoid vaccine mandates, The Hill reports.

“The upcoming open enrollment period, which begins November 1 and runs through January 15, is the first for President Joe Biden, who is seeking to restore the landmark health reform law after the Trump administration spent four years trying to undermine it.”

New York Times: “Congress is now considering four weeks of paid family and medical leave, down from the 12 weeks that were initially proposed in the Democrats’ spending plan. If the plan becomes law, the United States will no longer be one of six countries in the world — and the only rich country — without any form of national paid leave.”

ProPublica: “Interviews with more than 50 former Liberty students and staffers, as well as records from more than a dozen cases, show how an ethos of sexual purity, as embodied by the Liberty Way, has led to school officials discouraging, dismissing and even blaming female students who have tried to come forward with claims of sexual assault.”

The Verge: “Teenage users of the Facebook app in the US had declined by 13 percent since 2019 and were projected to drop 45 percent over the next two years, driving an overall decline in daily users in the company’s most lucrative ad market. Young adults between the ages of 20 and 30 were expected to decline by 4 percent during the same timeframe. Making matters worse, the younger a user was, the less on average they regularly engaged with the app. The message was clear: Facebook was losing traction with younger generations fast.”

“The findings, echoed by other internal documents and my conversations with current and former employees, show that Facebook sees its aging user base as an existential threat to the long-term health of its business and that it’s trying desperately to correct the problem with little indication that its strategy will work. If it doesn’t correct course, the 17-year-old social network could, for the first time, lose out on an entire generation.”

NBC News: “Critics suggest that Sinema is in the pocket of various industry donors to her campaigns or seeking to carve out a ‘maverick’ reputation, like longtime Republican Sen. John McCain, in Arizona.”

“But friends say her approach is consistent with a political philosophy that emphasizes credibility with colleagues, working across the aisle and rejecting single-party legislation.”

“Sudan’s military on Monday detained the prime minister, dissolved the government and declared a state of emergency, plunging the country’s fragile democratic transition into disarray,” the Washington Post reports.

Saad Aljabri said MBS could obtain a “ring from Russia” to carry out the attack.

Said Aljabri: “I am here to sound the alarm about a psychopath, killer, in the Middle East with infinite resources, who poses threat to his people, to the Americans and to the planet.”

Former President Donald Trump’s new social network has already violated a software licensing agreement and has 30 days to comply with the terms of the license before its access is terminated — forcing it to rebuild the platform or face legal action, The Verge reports.

The Florida attorney who filed a trademark application for “Truth Social” a week ahead of Donald Trump’s announcement that he’s launching a social media network is also attempting to trademark the words “truthing,” “post a truth,” “retruth” and “follow the truth,” Mother Jones reports.

“A man who once described a ballot being cast in his dead wife’s name as ‘sickening’ and was cited by the Nevada Republican Party last November as evidence that massive voter fraud swayed the results of the 2020 presidential election has been charged by prosecutors with voter fraud,” the Nevada Independent reports.

“According to a lawsuit filed in the Las Vegas Justice Court this month, the man, Donald Kirk Hartle, voted his deceased wife Rosemarie Hartle’s ballot.”