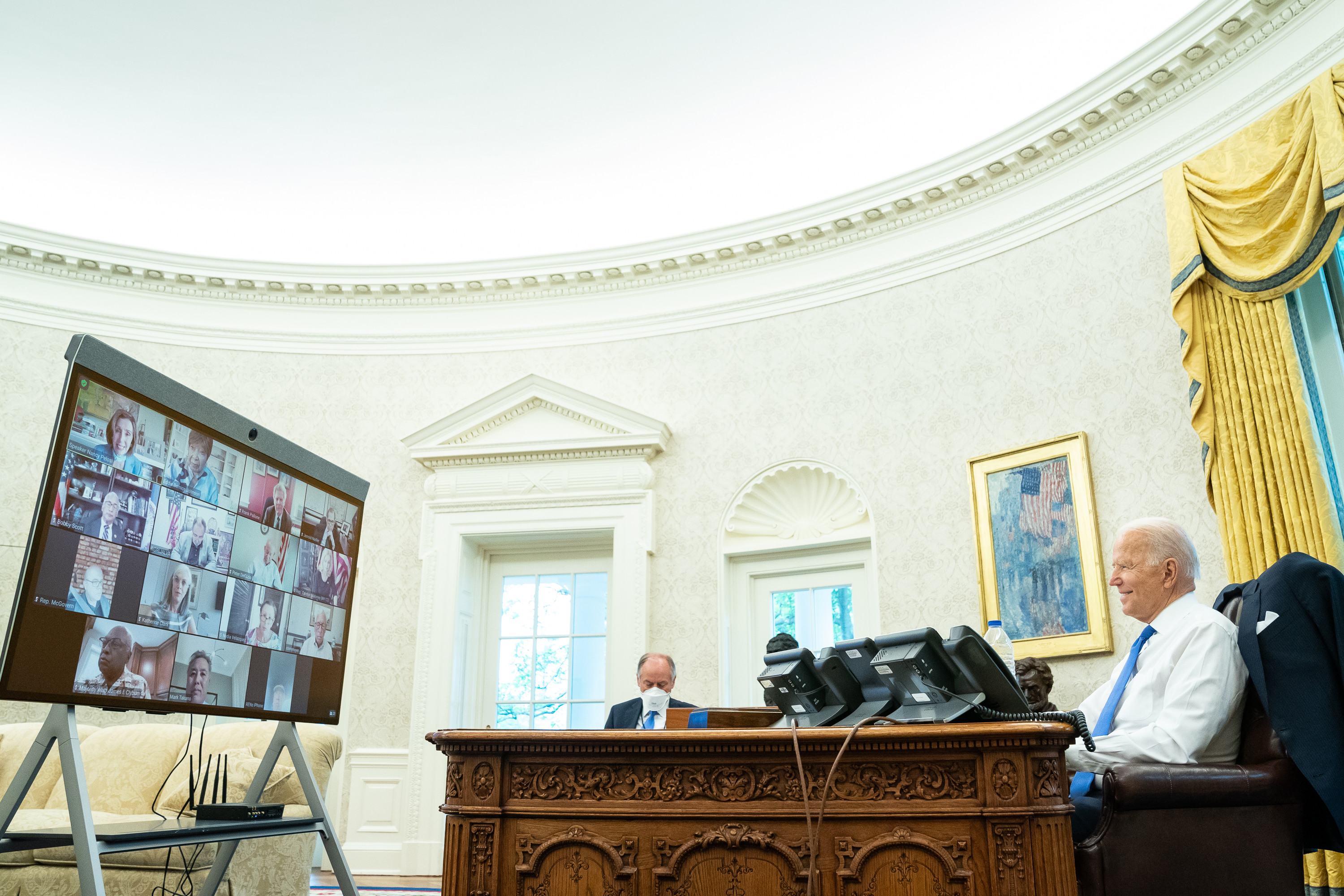 “President Joe Biden was hosting two pivotal senators for meetings in Delaware on Sunday in hopes of resolving lingering disputes over Democrats’ long-stalled effort to craft an expansive social and environment measure,” the AP reports.

Wall Street Journal: “With a series of deadlines approaching, President Biden’s increased involvement in talks over his sweeping social-policy agenda shows the line he is walking between being a pragmatic deal maker, with hopes of delivering tangible political wins, and his desire to enact transformative, long-term progressive policies.”

Speaker Nancy Pelosi said on Sunday she expects to have votes on President Biden’s infrastructure and Build Back Better deals in the coming week, Reuters reports.

Said Pelosi: “We have 90 percent of the bill agreed to and written. We just have some of the last decisions to be made.”

She added: “I think we are pretty much there now.”

Speaker Nancy Pelosi (D-CA) wouldn’t tell CNN whether she would run for reelection in 2022, saying she would consult with her family before making her decision public.

“I’m not really ready to say ‘let’s get rid of it altogether.’”

— Sen. Angus King (I-ME), to NBC News, suggesting a “talking filibuster” or “alternative” could be an option instead of eliminating the filibuster.

Washington Post: “At the heart of the Benenson-Newhouse research is something Democrats worried about a dozen years ago, when those messy negotiations took up so much bandwidth yet were also out of sync with what many swing voters prioritized. In late 2009 and early 2010, with unemployment hovering around 10 percent, key swing voters cared most about jobs and not expanding access to health insurance.”

“Today’s voters appear to be most concerned about the ongoing global pandemic and are not deeply invested in the haggling over proposals such as expanding Medicare coverage to include dental, hearing and vision benefits.”

Turkey’s President Recep Tayyip Erdogan has ordered the ambassadors of 10 countries, including the U.S., France, and Germany, be declared “persona non grata” after calling for the release of jailed Turkish businessman and philanthropist Osman Kavala, CNN reports.

Sen. Roy Blunt (R) told NBC News that former President Trump “can be a candidate if he wants to be” in 2024.

Doyle McManus: “One is money. Political contributions may be the most reliable revenue stream the Trump family enterprise has at the moment.”

“The other, equally important, is to bolster his legal defense. As long as he’s running (or even sort of running), Trump can denounce every inquest and subpoena as just another part of a political vendetta. It’s a way to hold his troops together — and to make every prosecutor think twice.”

“He’s notching up another presidential first: He’s running for reelection to stay out of jail.”

“Florida’s top public health official was asked to leave a state Senator’s office this week after refusing to don a mask in her office,” Florida Politics reports.

“Sen. Tina Polsky, who was diagnosed with stage 1 breast cancer in August, asked state Surgeon General Joseph Ladapo and his two legislative aides to leave her office after Ladapo refused to comply with her request to put on a mask.”

“Neera Tanden was named the next White House staff secretary on Friday morning, putting her in the nerve center of the building charged with overseeing the paper flow for President Biden,” the Washington Post reports.

“The staff secretary, who reports to the chief of staff, traditionally plays the role of both traffic cop and honest broker in the White House, with control over the documents that make it to the president, whether they be briefing books or decision memos laying out the arguments on major decisions.”

“The New Orleans-based Fifth U.S. Circuit Court of Appeals, which last week allowed Texas’ restrictive abortion law to remain in effect in the face of a federal challenge, promises to be a legal battleground for a host of Biden administration initiatives in the years ahead,” the Wall Street Journal reports.

“The Fifth Circuit, one of the nation’s leading conservative courts, covers the states of Texas, Louisiana and Mississippi. It has 17 active judges, 12 of whom are Republican appointees, including six placed on the court by former President Donald Trump. An array of hot-button cases are likely to land on the court’s docket as Republicans including Texas Attorney General Ken Paxton and conservative groups challenge administration policies.”

Right radio host and conspiracy theorist Rick Wiles claimed that Covid-19 vaccines contain “an egg that hatches into a synthetic parasite and grows inside your body.”

Said Posey: “People are understandably frustrated. Actually, they are very angry, and they are not going to sit back and take it much longer. Instead of the bogus Build Back Better plan and reconciliation plan, you know what they want? They want the Democrats to help put America back where they found it and leave it the hell alone. Let’s go, Brandon.”

The phrase became popular earlier this month after a NASCAR race won by Brandon Brown. An interviewer commented that the crowd was chanting “let’s go, Brandon.” But they were actually saying, “Fuck you, Biden.”

“Schallenberg announced that if the number of COVID-19 patients in intensive care units reaches 500, or 25% of the country’s total ICU capacity, entry into businesses such as restaurants and hotels will be limited to those who are vaccinated or recovered from the virus.”

“If the number reaches 600, or one-third of total ICU capacity, the government plans to impose restrictions on unvaccinated people. In this case, they would only be allowed to leave their homes for specific reasons.”

“A senior U.S. diplomat on Sunday urged North Korea to refrain from additional missile tests and resume nuclear diplomacy, days after the North fired off its first underwater-launched ballistic missile in two years,” the AP reports.