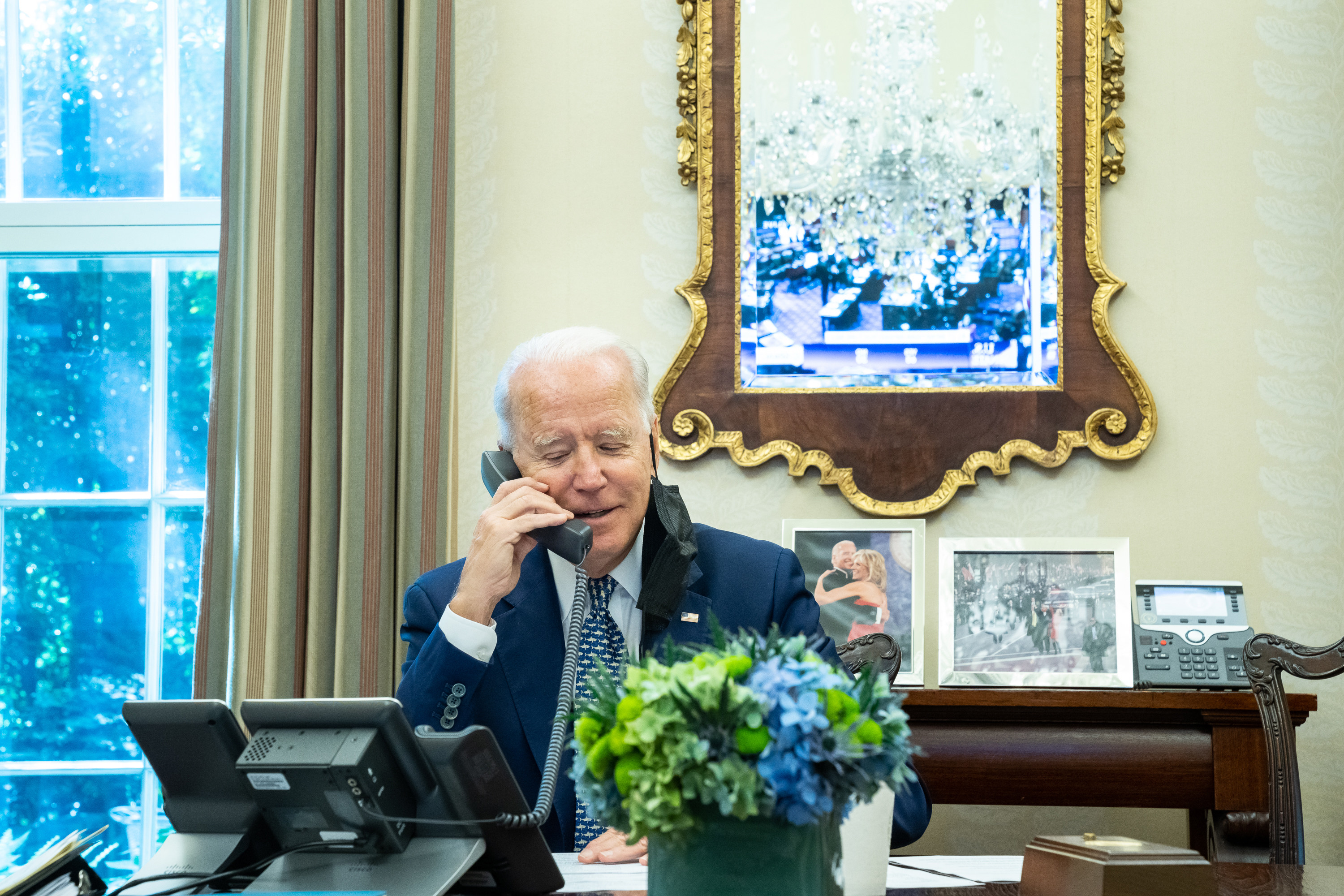 A new CNBC poll finds that inflation now ties with the coronavirus as the biggest concern for Americans, up 16 points from the prior survey. In addition, 47% of the public believe there will be a recession in the next year, up 13 points from when the question was last asked in 2019.

The same CNBC poll finds just 41% of Americans approve of President Biden’s handling of the presidency, compared to 52% who disapprove — a 14-point swing in net approval since July.

“Behind the decline is a surge in negative views of his handling of the economy, with just 40% approving and 54% disapproving, a 7-point increase from July.”

“A bare majority of Americans still approve his handling of the coronavirus, but the margin narrowed considerably. Fifty percent now approve compared to 53% in July, and 45% disapprove, compared to just 38%.”

A new Quinnipiac poll finds that more than a year and a half since the pandemic hit the United States, 81% of Americans do not expect life to return to normal in the U.S. anytime soon, while 26% say life will never return to normal.

When given a number of words and asked whether or not those words described how they are feeling, most Americans say they are disappointed (62%), followed by hopeful (50%), emotionally exhausted (46%), worried (43%), angry (41%), and indifferent (24%).

PENNSYLVANIA EIGHTEENTH CD. State Rep. Summer Lee on Tuesday launched her campaign to succeed longtime Rep. Mike Doyle, a fellow Democrat who announced his retirement from this safely blue Pittsburgh-based seat the previous day. Lee, who would be the first Black woman to represent the Keystone State in Congress, entered the race with the support of ​​Ed Gainey, who is all but assured to be elected mayor of Pittsburgh next month following his upset May Democratic primary win.

Lee, an attorney and community organizer, won her current post in 2018 after she demolished state Rep. Paul Costa in the primary by a 68-32 margin and won the general election unopposed. Lee, who was the first Black woman from southwestern Pennsylvania to serve in the legislature, soon established herself in the chamber as a prominent progressive.

WPXI reported earlier this month that Lee was planning to challenge Doyle for renomination, but she didn’t announce anything before he retired. Lee, however, filed FEC paperwork hours before the congressman made his plans known and hinted Tuesday that she was already intending to run, saying, “To be clear, I definitely did not decide to run yesterday after 1 p.m.”

Lee joins a nomination contest that includes professor Jerry Dickinson, who was seeking a rematch against Doyle after losing last year’s primary 67-33, and other Democrats may also get in. HuffPost mentions as possibilities state Rep. Austin Davis, Pittsburgh City Councilman Corey O’Connor, and Pittsburgh City Controller Michael Lamb, the uncle of neighboring Rep. and Senate candidate Conor Lamb. There’s no word yet, though, if either is interested.

P.S. Because Pennsylvania will be dropping from 18 to 17 congressional districts in 2022, the next version of this seat will inevitably be assigned a different number. There’s little question, though, that this will remain a safely blue Pittsburgh area constituency no matter what it’s called.

Former President Donald Trump’s “proprietary” new social network ’Truth Social’ is actually a thinly disguised fork of popular social network codebase Mastodon, Motherboard reports. “Mastodon is a piece of open-source software that people can use to create their own social networks. The platform has a timeline style similar to Twitter.”

Donald Trump’s new social network — which he launched because he was “silenced” on other social media platforms — includes a terms of service that include a long list of prohibited activities, including that users have to agree not to “disparage, tarnish, or otherwise harm, in our opinion, us and/or the Site,” Deadline reports.

NEW HAMPSHIRE U.S. SENATOR. A new University of New Hampshire poll finds Gov. Chris Sununu (R) leading Sen. Maggie Hassan (D-NH) in a possible U.S. Senate match up, 45% to 42%.  In other match ups, Hassan leads retired Gen. Don Bolduc (R) by a 47% to 42%. And she would run neck and neck against former Sen. Kelly Ayotte (R), in a rematch of the race that Hassan won five years ago.

CALIFORNIA SECRETARY OF STATE. “In her bid to be California’s Secretary of State, Rachel Hamm (R) has the backing of some of the leading lights in the Trump movement,” the Daily Beast reports.

“But Hamm’s new allies often fail to mention her role battling in what she imagines as a ceaseless war with Satanists and witches.”

“Hamm has claimed that devil-worshippers sacrificed animals and performed other occult rituals in front of her house. But she isn’t without her defenses, saying that her prayers also inspired the murder of a witch in her neighborhood.”

WYOMING AT LARGE CD. “A prominent Washington lobbyist close to Kevin McCarthy, the House minority leader, is warning Republican political consultants that they must choose between working for Rep. Liz Cheney or Mr. McCarthy, an ultimatum that marks the full rupture between the two House Republicans,” the New York Times reports.

Former President Donald Trump called Rep. Liz Cheney (R-WY) a “smug fool” after she pressed the House to back a criminal contempt vote against State Bannon, The Hill reports.  Said Trump: “Low-polling Liz Cheney (19%) is actually very bad news for the Democrats, people absolutely cannot stand her as she fights for the people that have decimated her and her father for many years.”   He added: “She is a smug fool, and the great State of Wyoming, together with the Republican Party, fully understands her act. To look at her is to despise her.”

Vanity Fair: “Mike and Karen Pence are living their best lives. No, really. Almost a year after Donald Trump nearly got them murdered at the Capitol by a band of rioters trying to overturn the election, the former second couple is living in a nearly $2 million mansion in suburban Indianapolis. Mike Pence has a megawatt book deal in the bag with Simon & Schuster. And the two are traveling widely, with Mike Pence getting paid upwards of $100,000 a speech.”

“In perhaps one of the most unlikely trollings of the former president, Mike Pence also remains a top-tier candidate for the Republican nomination in 2024.”

“Former President Trump is telling most anyone who’ll listen he will run again in 2024 — and poll after poll shows the vast majority of Republicans would gladly cheer him on and vote for him,” Axios reports.

“Almost every top Republican we talk to said it would take a severe illness, death — or criminal charges sticking — to stop Trump from walking away with the race before it even begins.”

“A GPB News analysis finds Walker has done more than two dozen interviews in the eight weeks since launching his campaign, almost exclusively with Fox News personalities like Sean Hannity.”

The Columbia Journalism Review looks at how right wing donors have propped up over a thousand local news sites that push conservative narratives.

Politico: “As the party hardens around its fealty to former President Donald Trump, the GOP is filling up its midterm ballot with a roster of conspiracy theorists and extremists that could threaten the party’s prospects in a state that’s drifted leftward in recent elections.”

“The latest of those candidates is Ron Watkins, a celebrity in the QAnon conspiracy world suspected of being Q, who announced his plans to run for Congress last week.”

“It isn’t just that Watkins embraces the baseless claim that the November election was stolen. It’s that an entire ticket is running on that falsehood now.”

The National Republican Congressional Committee pulled a fast one, putting out a statement Wednesday targeting four Democratic members of Congress from New Jersey because they have “failed at restoring” the federal deduction for state and local taxes in the reconciliation bill.

In related news, the changes to the SALT deduction are still on the table, according to House Ways and Means Committee Chair Richard Neal (D-MA).

NORTH CAROLINA REDISTRICTING. North Carolina’s Republican-run legislature has released five draft congressional maps and one for the state Senate, which you can find here. Under state law, the governor’s approval is not needed for new redistricting plans, so Democratic Gov. Roy Cooper cannot veto any GOP maps. However, Democrats have a 4-3 majority on the state Supreme Court, which in recent years has cracked down on the worst excesses of Republican gerrymandering.

WEST VIRGINIA REDISTRICTING. West Virginia’s Republican-run Senate approved a new map for the chamber in a wide bipartisan vote on Tuesday after rejecting a number of prior proposals over a period of several days. The map now goes to the House, which has yet to pass a plan for its own districts.