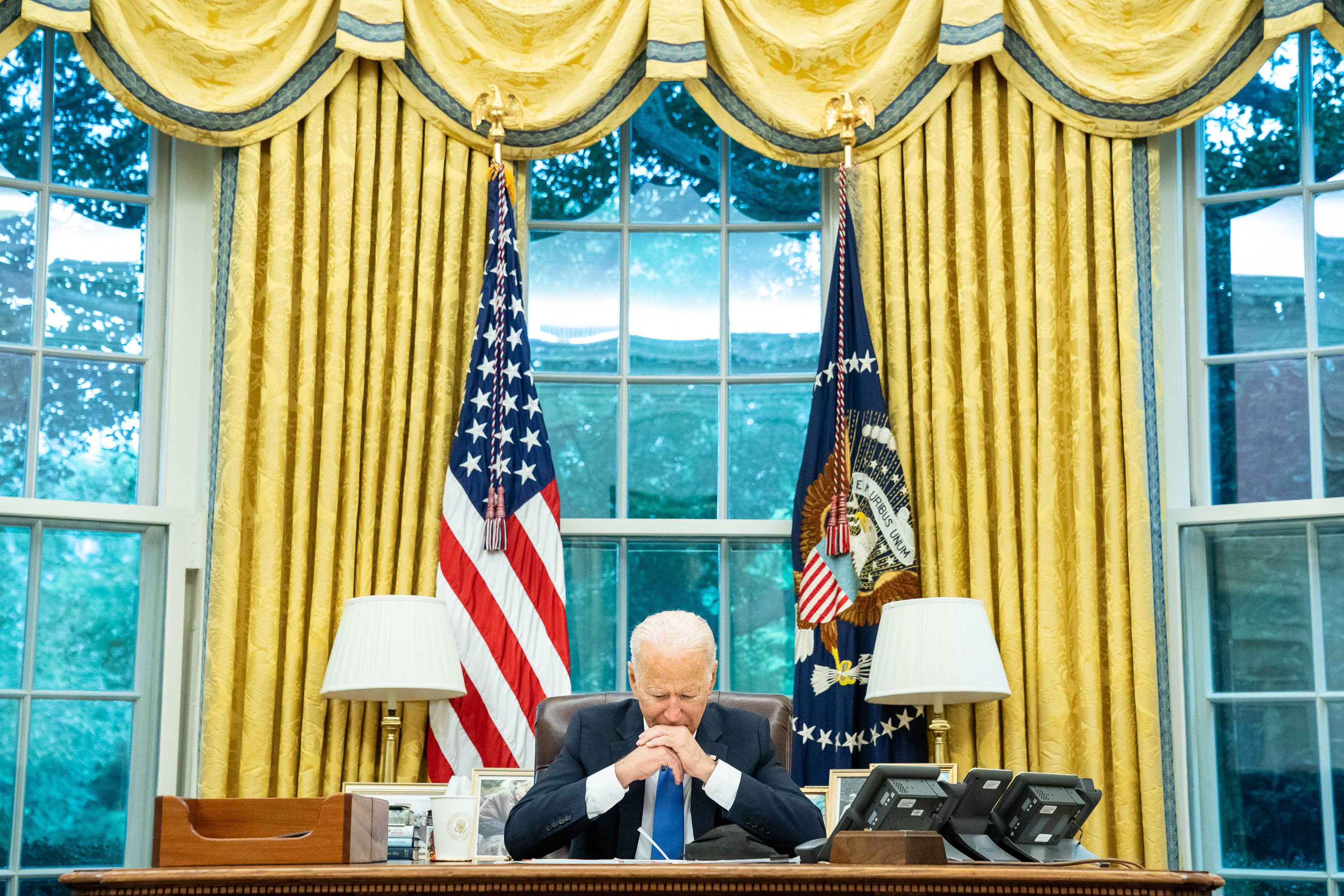 “President Joe Biden said Thursday he’s open to supporting the elimination of the Senate’s filibuster to pass voting-rights legislation and other bills that Republicans have blocked,” USA Today reports.  Said Biden: “We’re going to have to move to the point where we fundamentally alter the filibuster.”

CNN: “The political reality, of course, is that Biden’s support (or lack thereof) for getting rid of the legislative filibuster is not necessarily indicative of much. Both West Virginia Democratic Sen. Joe Manchin and Arizona Democratic Sen. Kyrsten Sinema have said they oppose getting rid of the filibuster — and Democrats can’t change the Senate rules with all 50 of their side’s votes.”

Axios: “Biden is jettisoning the corporate tax increases that White House officials have insisted, for the past 10 months, are wildly popular across the country. He admitted he doesn’t have the votes.”

Also from the Washington Post: “Biden explained several times at the CNN-sponsored event how and why he was trimming his proposals, confirming that a paid-leave proposal was down from 12 weeks to four weeks and that he had been forced to drop his plans for free community college.”

Punchbowl News: “Yes, you read that right. The White House really wants a vote on reconciliation and infrastructure next week. This would give President Joe Biden and Democrats two legislative wins — desperately needed wins — right before he heads to Europe. House passage of the infrastructure bill would also give Democrat Terry McAuliffe a boost in a tight gubernatorial fight in Virginia that has political repercussions far beyond the confines of the Old Dominion.“

“Is it possible? Yes, it’s been done before. Is it likely? Ahhh, count us as not only skeptical, but very skeptical. We can see an infrastructure vote because of the looming Oct. 31 highway funding deadline. But both seems very difficult.”

“We do expect a serious discussion today between Biden, Speaker Nancy Pelosi and Senate Majority Leader Chuck Schumer over this hurried timetable.”

“We’ve rounded the turn and we’re almost to the stretch.” — Speaker Nancy Pelosi, quoted by Politico, on the budget reconciliation negotiations.

Sen. Jeff Merkley (D-OR) told NBC News the Democratic negotiations for a social spending plan are “completely taking the air out of the balloon for the Biden presidency.”   He added: “It’s hurting Biden. It’s hurting the Democrats. It’s undermining the vision of all the accomplishments we will have as being highly significant. The frustration is people’s heads are blowing off. And they should be. It has to come to an end. I don’t know if soap opera or a nightmare soap opera is the right wording, but we’re in big trouble right now with this extended, getting nowhere negotiation.”

NBC News: “[Biden’s negotiating] preference to keep the factions in separate rooms — rather than to bring together a handful of lawmakers from each chamber and each side — is a tried-and-true method of collecting votes, said veterans of White House-Capitol Hill relations. The idea is to limit ideological conflict between factions and use peer pressure to lean on recalcitrants in each group.”

“The Justice Department has added two top prosecutors from Washington to the child sex trafficking investigation of Rep. Matt Gaetz (R-FL),” the New York Times reports.   The prosecutors — one a public corruption investigator with an expertise in child exploitation crimes, and the other a top leader of the public corruption unit — have been working on the Florida-based investigation for at least three months.”

Washington Post: “The matter now goes to the Justice Department, which will decide whether to pursue the contempt referral. Contempt of Congress is a misdemeanor criminal offense that can result in up to one year in prison and a fine of up to $100,000.”

“Asked at a House Judiciary Committee hearing Thursday how the Justice Department would handle such a referral, Attorney General Merrick Garland said it ‘will do what it always does in such circumstances—it will apply the facts and the law.’”

Donald Trump released a statement: “The insurrection took place on November 3, Election Day. January 6 was the Protest!”  And yet Condoleeza Rice thinks we should “move on.”

“Twitter is publicly sharing research findings today that show that the platform’s algorithms amplify tweets from right-wing politicians and content from right-leaning news outlets more than people and content from the political left,” Protocol reports.

“The research did not identify whether or not the algorithms that run Twitter’s Home feed are actually biased toward conservative political content, because the conclusions only show bias in amplification, not what caused it.”

Facebook outspent nearly the entire D.C. influence industry on lobbying during the quarter ending Sept. 30, putting in its second most lavish three months ever, Politico reports.

“China on Friday said there is ‘no room’ for compromise or concessions over the issue of Taiwan, following a comment by U.S. President Joe Biden that the U.S. is committed to defending the island if it is attacked,” the AP reports.  “China has recently upped its threat to bring Taiwan under its control by force if necessary by flying warplanes near the island and rehearsing beach landings.”

“The Federal Reserve will bar senior officials from purchasing individual securities and restrict investment activities to broad-based products such as mutual funds, following disclosures that last month that resulted in the resignations of two reserve bank presidents,” the Wall Street Journal reports.  “The Fed said Thursday the new rules would apply to the system’s 12 reserve bank presidents and the seven governors on the central bank’s Washington-based board.”

“The Taliban imposed further restrictions on female city government employees in Afghanistan’s capital on Thursday, barring many from returning to work next week in a sign that the group will continue to restrict women’s rights despite two decades of freedoms under the previous government,” the Washington Post reports.

“The Taliban have promised plots of land to relatives of suicide bombers who attacked U.S. and Afghan soldiers, in a provocative gesture that seems to run counter to their efforts to court international support,” the AP reports.

Florida Gov. Ron DeSantis (R) “called for a special legislative session to block the Biden administration’s vaccine mandates, taking the most aggressive action yet in his ongoing fight with the White House over Covid restrictions,” Politico reports.

“Nearly a year after offering up a hefty bounty for evidence of voter fraud in the wake of Donald Trump’s loss, Lt. Gov. Dan Patrick (R) has handed out his first reward,” the Dallas Morning News reports.  “But instead of going to an informant who smoked out fraud by Democrats, Patrick’s five-figure payout went to a progressive poll worker in Pennsylvania whose tip led to a single conviction of illegal voting by a registered Republican.”

“Sinclair Broadcast Group, one of the largest TV station operators in the US, said Monday that a ransomware incident is disrupting some of its office and operational networks,” CNN reports.  “At an early afternoon town hall meeting held via Zoom, staffers were told that the ripple effects are widespread and the full ramifications are not yet known.”  Said one reporter: “Still no email, phones, file video or graphics. They expect us to keep broadcasting as if we aren’t down.”

A weekend cyberattack against Sinclair Broadcast Group Inc. was linked to one of the most infamous Russian cybergangs, called Evil Corp., Bloomberg reports.