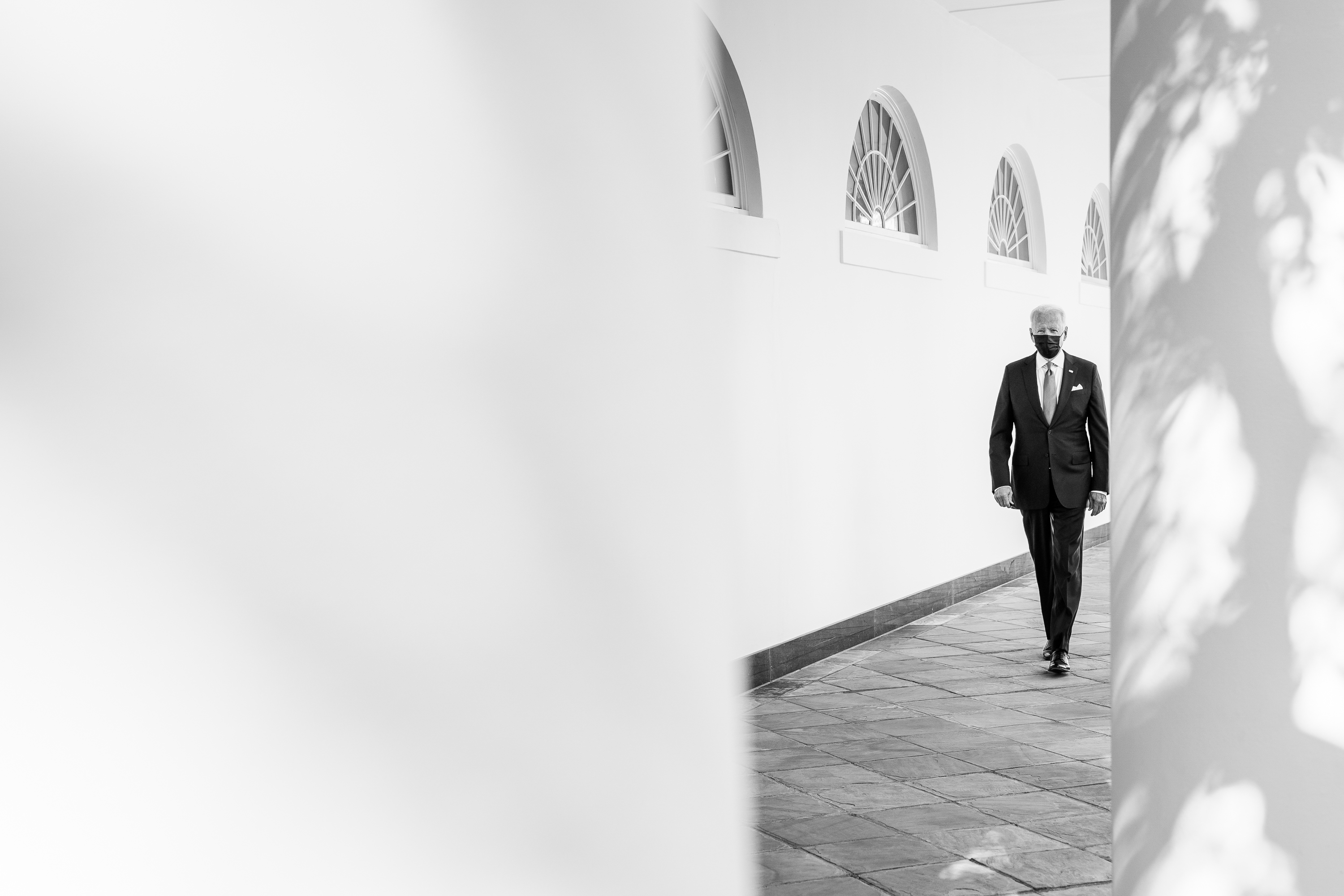 New York Times: “After months of plodding discussions, there is a new sense of urgency and optimism at the White House and among Democrats on Capitol Hill. Drawing on decades of experience as a senator, Mr. Biden has maintained disciplined patience with members of his own party, according to people familiar with the talks. He has not expressed deeply held views on the details or drawn many red lines.”

“A final framework for the legislation has yet to emerge, even as discussions accelerate. But the negotiations over Mr. Biden’s social policy agenda, known as Build Back Better, are revealing him to be the flexible dealmaker that some hoped for — and others dreaded.”

“Reaching compromise, even on a pared-back version of Mr. Biden’s agenda, would dramatically increase the federal government’s spending on a wide array of social programs, helping families, college students, middle-class workers and others for decades.”

“For weeks, President Biden has met repeatedly with Democratic lawmakers as part of the tortuous negotiations over his agenda — but to the frustration of many, he has revealed few opinions of his own on what should remain in the plan and what should be jettisoned,” the Washington Post reports.

“This week, however, Biden is doing something new: getting specific and plunging into details, telling lawmakers exactly what he thinks needs to go into the package that could define his presidency.”

Sen. Jon Tester (D-MT) talked to Fox News on the budget reconciliation negotiations and said, “I think we’re very, very close to having a deal.”

He added: “I think it’s just a matter of not letting the perfect be the enemy of the good… The top line is what’s important.”

“In a major development for President Joe Biden’s agenda, Sen. Kyrsten Sinema (D-AZ) has signed off on new revenues — including some tax increases on the wealthy — to help pay for Biden’s jobs and families plan,” Politico reports.

Said a source: “Senator Sinema has agreed to provisions in each of President Biden’s four proposed revenue categories — international, domestic corporate, high net worth individuals, and tax enforcement — providing sufficient revenue to fully pay for a budget reconciliation package in the range currently being discussed.”

Jonathan Chait: “It’s not clear Sinema is a rational actor. She appears deeply invested in a personal narrative in which she is the Democratic version of John McCain, bravely defying her party to stand up for bipartisanship. And, while this is armchair psychoanalysis, her history in the Green Party is a kind of through-line to a personal style that has remained consistent even as her ideological commitments have changed radically.”

“Sinema, like many Green Party types, sees politics as an avenue for personal expression. Attempting to persuade a Green Party candidate not to take action X because it will have consequence Y just makes them angry. In 2000, Ralph Nader was surrounded by advisers who saw exactly what outcome his campaign would have (electing George W. Bush) but simply could not get him to budge. Nader’s own account of this campaign reveals a mind unable to think in straightforward consequentialist terms — he was too fixated on his right to do what he wanted to measure his actions in any practical way.”

Punchbowl News: “A new strategy is emerging among Democrats at the White House and on Capitol Hill as they scramble to put together an agreement on the centerpiece of President Joe Biden’s legislative agenda, a multi-trillion dollar reconciliation package focused on new social spending programs.”

“After months of talks that have alternated between productive, maddening, fruitful and deadlocked, White House officials and Capitol Hill Democrats now believe it will be easier to find agreement with Sen. Joe Manchin (D-WV) than Sinema.”

Michelle Cottle: “This is what many of her critics miss. They see her as a chameleon, unprincipled and narcissistic, an intellectual lightweight without any steady, guiding tenets. But she does have a guiding principle. She holds fast to an abhorrence of the toxicity and dysfunction of the hyper-polarized political system, brandishing a potent combination of disgust, frustration and moderation that could, come to think of it, put her in sync with a big slice of Americans.”

“Her involvement with progressive activists — both as one herself and later as an elected official — left some scars. In her 2009 book, Unite and Conquer, Ms. Sinema emerges as a progressive disillusioned by the foibles and limitations of progressive activism. The book, on coalition building, is awash in mocking caricatures of progressives as smug, ineffectual, rigid, self-serious, wonky, disorganized know-it-alls.”

Five veterans tapped to advise Sen. Kyrsten Sinema (D-AZ) resigned from their posts on Thursday, publicly accusing her of “hanging your constituents out to dry” in the latest sign of growing hostility toward a centrist who has emerged as a key holdout on President Biden’s agenda, the New York Times reports.

Billionaire investor Nelson Peltz told CNBC that he talks to Sen. Joe Manchin every week, offering him words of encouragement as the conservative Democrat pushes to shrink the cost of President Joe Biden’s sprawling economic plan.

Sen. Joe Manchin (D-WV) told The Hill he has no plan to leave the Democratic Party and has not threatened to do so.

Said Manchin: “I’m not threatening to leave. Why would I? I’m very secure in my positions and honestly, I’m not the one stressed out.”

However, Manchin admitted that he told President Biden, Senate Majority Leader Charles Schumer (D-NY) and his caucus that if it would help them “publicly” for him to become an Independent who still caucuses with the party.

The House of Representatives voted to hold Steve Bannon in criminal contempt for defying subpoenas issued by Jan. 6 select committee, 229 to 202.

All Democrats and nine Republicans supported the measure.

“Of the 19 former Trump aides, advisers and rally organizers subpoenaed by the House select committee investigating the Jan. 6 insurrection, only one — Steve Bannon — has so far refused to cooperate with the investigation,” the Washington Post reports.

Former Secretary of State Condoleezza Rice told The View that she wept during the deadly insurrection at the Capitol on January 6.   Said Rice: “I thought: ‘I study countries that do this.’ I didn’t think it would happen in my own country.”   She added that it “was wrong” but then said it’s time for lawmakers to “move on.”

Former President Donald Trump threw his support behind indicted Rep. Jeff Fortenberry (R-NE) while conceding the GOP lawmaker may have lied to the FBI about an illegal foreign campaign finance scheme.

Said Trump: “Isn’t it terrible that a Republican Congressman from Nebraska just got indicted for possibly telling some lies to investigators about campaign contributions, when half of the United States Congress lied about made up scams, and when Mark Zuckerberg, in my opinion a criminal, is allowed to spend $500 million and therefore able to change the course of a Presidential Election, and nothing happens to them.”

“Rep. Jeff Fortenberry (R-NE) stepped down as the top Republican on the House appropriations subcommittee on agriculture, one day after a federal grand jury indicted him on charges of lying to federal investigators about his campaign contributions,” the Washington Post reports.

“America’s coronavirus outbreak is rapidly improving as the Delta wave recedes, and vaccines for kids — which could become available within weeks — will help the situation improve even further,” Axios reports.

Hawaii became the first state to administer coronavirus vaccines to 90% of its residents aged 12 and older, Forbes reports.

On the other end of the spectrum, West Virginia (55.7%), Wyoming (58%) and Mississippi (59.8%) have inoculated fewer eligible residents than any other states.

“The Chinese military conducted two hypersonic weapons tests over the summer, raising US concerns that Beijing is gaining ground in the race to develop a new generation of arms,” the Financial Times reports.

“Russian President Vladimir Putin ordered people to stay off work for at least a week while Latvia has introduced a monthlong Covid-19 lockdown as deaths climb, driving renewed fears of another wave of infections as winter sets in,” the Wall Street Journal reports.

“Russia has faced an uphill battle in curbing the spread of the virus, in large part because of the laid-back approach of many Russians to mitigation measures such as social distancing and wearing face coverings in public.”

“There is also widespread skepticism over vaccinations.”

“U.S. economic growth slowed to a modest to moderate rate this fall as firms confronted supply-chain disruptions, elevated prices, a shortage of available workers and fears around the Delta variant of Covid-19,“ the Wall Street Journal reports.

“Many businesses said they expected higher prices and supply shortages to last another year or so.”

“New documents detail more than a dozen conflicts of interest Postmaster General Louis DeJoy faced because of his and his family’s investments in a number of companies closely tied to the U.S. Postal Service,” NBC News reports.

“The global upswing in trade is leaving the U.K. behind, an early sign of the challenge Brexit is presenting its economy,” the Wall Street Journal reports.

“Leaving the EU has put the U.K. outside the EU’s vast internal market of 445 million consumers and a customs territory that is bigger still, stretching from the Atlantic to Turkey. It is hobbling trade just as its economy needs all its engines firing to power out of its worst downturn in a century.”

“U.S. authorities detained more than 1.7 million migrants along the Mexico border during the 2021 fiscal year that ended in September, and arrests by the Border Patrol soared to the highest levels since 1986,” the Washington Post reports.

“Rep. Jim Jordan (R-OH) on Wednesday struggled to answer questions about his communications with then-President Donald Trump during the Jan. 6 attack on the Capitol, telling a House panel that he doesn’t recall the number of times he spoke with Trump that day,” the Washington Post reports.

“Over the past dozen years, at least 28 people who currently hold elected office joined or financially supported the Oath Keepers, the extremist group that figured prominently in the violent Jan. 6 storming of the US Capitol,” BuzzFeed News reports.

Kara Swisher and Walt Mossberg discuss Facebook on the Sway podcast and conclude the company is “fundamentally unethical” at its core.

Wall Street Journal: Facebook is rebuked by its own oversight board.