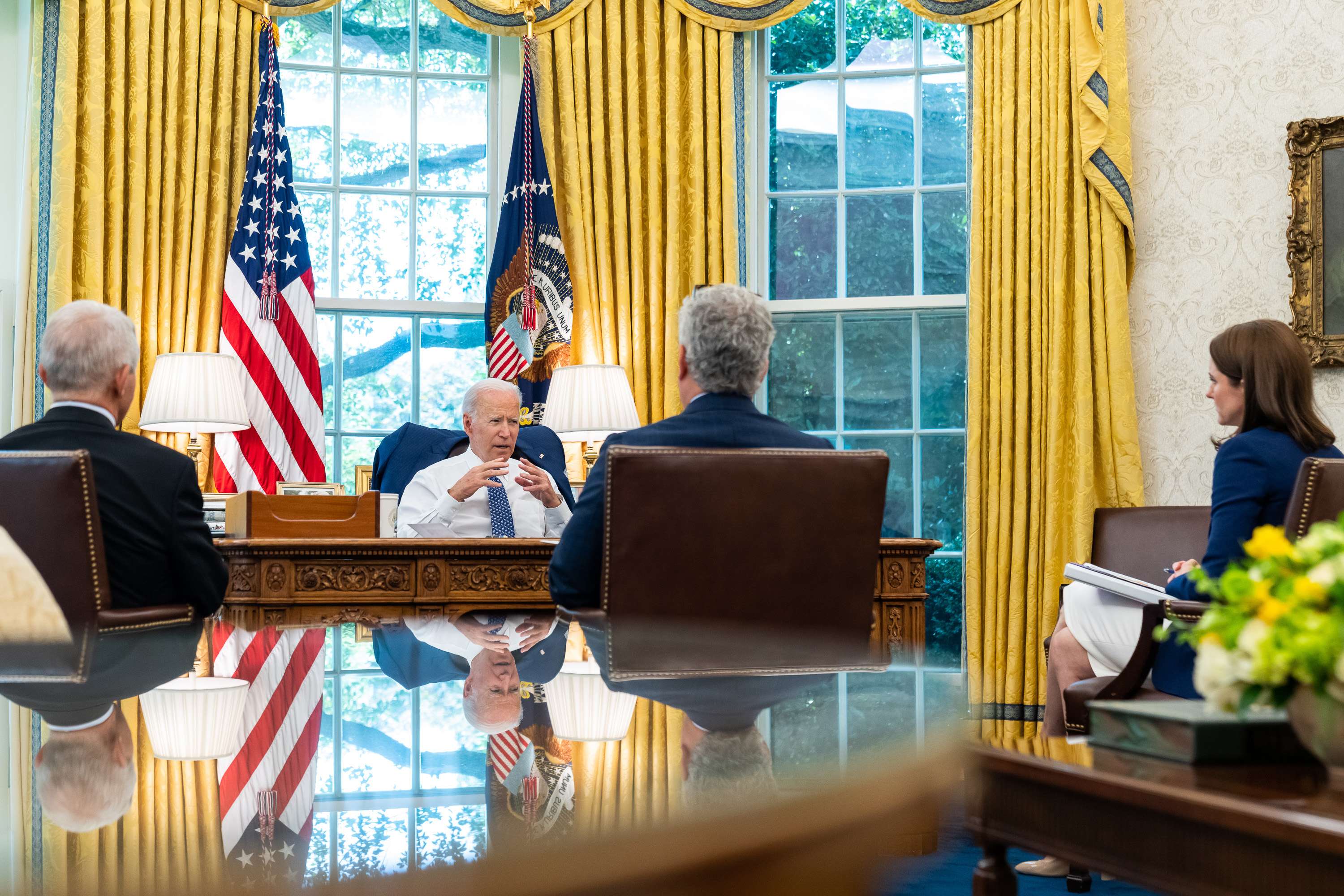 Punchbowl News: “There is a lot more urgency to get a top-line agreement within the next few weeks — potentially this week. That doesn’t mean a vote will happen in the next two weeks. It doesn’t mean they’ll definitely get a deal. There are huge hurdles. It means there’s definitely a new sense of urgency to come to some sort of top-line number and a programmatic outline this month.”

CNN: “A source familiar with the President’s private schedule says it is filled this week with blocks of ‘congressional time,’ which the President uses to make phone calls, meet with lawmakers in person or talk over his legislative strategy with top aides.”

“Manchin and Sinema are expected to get a solo audience with the President.”

“The lawmakers, who have been on opposite sides of the reconciliation debate for several months, had a two-hour discussion on President Joe Biden’s massive social spending package. Democrats plan to pass the package through a procedural measure known as reconciliation without Republican support.”

“It was almost inevitable that the fight over President Joe Biden’s agenda would come down to Bernie Sanders vs. Joe Manchin,” Politico reports.

“They represent fewer than 1 percent of Americans, but there’s no clearer window into Democrats’ inability to advance their domestic priorities than the ongoing rift between the socialist Vermont Independent and the conservative West Virginia Democrat. The duo’s verbal scuffle over the pace and scope of Biden’s social spending plan is going increasingly public, with Sanders aggressively leaning on Manchin as the latter tries to trim a measure stocked with progressive priorities.”

Said Hoyer: “My own view is that we ought to do fewer things better. We ought to make sure that which programs we include in the bill will have a real impact.”

Politico: “The Jan. 6 committee has hit the judicial jackpot. Donald Trump’s lawsuit seeking to kneecap the committee before it obtains his White House records has landed on the docket of Judge Tanya Chutkan.”

“Chutkan, an Obama appointee to the federal district court of Washington D.C. in 2014, has even imposed sentences that went beyond prosecutors’ requests in recent Capitol riot cases.”

Senate Republicans have put a “hold” on the confirmation of President Joe Biden’s pick for U.S. Attorney for Washington, D.C., who will oversee the hundreds of prosecutions stemming from the January 6 attack on the Capitol, Insider reports.

Even key senators are in the dark about what’s delaying Matt Graves’ confirmation vote.

“The Supreme Court agreed to a request from abortion-rights advocates and providers to quickly consider taking up their challenge of a restrictive Texas law that bans most abortions after as early as six weeks of pregnancy,” CNBC reports.

The new Texas abortion law has essentially made it impossible for many teenage girls to terminate a pregnancy, the AP reports.  That’s because children under 18 have to get permission from a judge to get an abortion without parental consent, but the new six-week timeline is usually too short for someone to go through that court process in time.

“President Joe Biden will participate in a CNN town hall on Thursday in Baltimore, where he’ll take questions as his administration continues to sell his ambitious legislative agenda to members of Congress and the nation,” CNN  reports.

“President Biden has only given 10 one-on-one press interviews since taking office in January, a low number that is drawing more attention toward the White House’s efforts to control and manage the way Biden interacts with reporters,” The Hill reports.

“Senate Democrats on Tuesday will unveil a scaled-back version of a Biden administration proposal to crack down on wealthy tax cheats after conservative groups and the bank industry raised major privacy concerns,“ the Washington Post reports.

“Initially, the Department of Treasury and Senate Democrats had proposed requiring financial institutions to provide the Internal Revenue Service with additional information on bank accounts with more than $600 in annual deposits or withdrawals.”

“After a backlash, the new proposal will instead require the provision of additional information for accounts with more than $10,000 in annual deposits or withdrawals.”

“Federal Reserve Chairman Jerome Powell’s chances for a second term leading the central bank so far have been dented but not derailed by a reputational crisis over stock-trading disclosures by senior officials” the Wall Street Journal reports.

“Mr. Powell, a Republican, has been the front-runner to keep the job when his term expires early next year. But questionable trading activities by two Fed bank presidents cast a cloud over his prospects by giving a vocal minority of Democrats who already opposed his nomination new grounds to call for his replacement.”

“A U.S. Capitol police officer was arrested Friday for obstruction of justice charges related to communications with a person later criminally charged for participation in the Jan. 6 Capitol riot by Trump supporters,” CNBC reports.  “The cop, Michael Riley, allegedly told the other person to delete Facebook posts and also deleted his own Facebook messages to and from that person.”

Virginian-Pilot: “Almost half a year ago, Northam said publicly he had prolonged smell and taste loss following his mild illness. He intended that as a wakeup call for Virginians on the interminable consequences of the coronavirus. Vaccines, which weren’t available when he got sick in September 2020, are the best prevention, he said. But perhaps more surprising was when he recently brought up his symptoms again: Even now, more than a year since his case, he hasn’t regained those senses.”

Former U.S. Food and Drug Administration Commissioner Scott Gottlieb called for “urgent research” into a mutation of the delta variant — known as delta plus — following a surge in Covid-19 cases in the U.K., Bloomberg reports.

“A wealthy Trump donor who helped finance the rally in Washington on Jan. 6 also gave $150,000 to the nonprofit arm of the Republican Attorneys General Association,” the Washington Post reports.

Sen. Bill Cassidy (R-LA), a physician, told Axios that he favors cognition tests for aging leaders of all three branches of government.

Noting he wasn’t talking about specific people, Cassidy said: “It’s usually noticeable. So anybody in a position of responsibility who may potentially be on that slope, that is of concern. And I’m saying this as a doctor.”

He added: “I’m told that there have been senators in the past who, at the end of their Senate terms were senile. I’m told that was true of senators of both parties.”

“Joel Greenberg, the former Florida official whose crimes in the state ensnared Rep. Matt Gaetz  (R-FL) in a federal sex trafficking investigation, has been providing the Justice Department with new information as he continues to cooperate with authorities following a guilty plea earlier this year,” CNN reports.

Sen. Tommy Tuberville (R-AL) told the Washington Post that he hid in a storage closet with other Republican senators during the January 6 insurrection.

Tuberville recalled the theme of the discussion: “Do we want to continue this if there’s not going to be a result we are looking for anyway?”

Some senators did change their minds after the closet meeting, but Tuberville went on to object to certifying the electoral college votes in Arizona and Pennsylvania.

“A federal grand jury indictment charged  Rep. Jeff Fortenberry (R-NE) on Tuesday with one count of scheming to falsify and conceal material facts and two counts of making false statements to federal investigators looking into illegal contributions to his 2016 campaign,” the Omaha World Herald reports.

The indictment alleges that Fortenberry “repeatedly lied to and misled authorities during a federal investigation into illegal contributions to Fortenberry’s re-election campaign made by a foreign billionaire in early 2016.”

Rep. Mo Brooks (R-AL) “was about a month late in disclosing that he sold up to $50,000 worth of stock in the pharmaceutical company Pfizer — despite criticizing the COVID-19 vaccine manufacturer and bashing mandates for people to get a coronavirus vaccine,” Insider reports.

Rep. Bob Good (R-VA) encouraged a group of high school students to not wear masks in school, saying during his visit the administration “can’t stop everyone,” the Rappahannock News reports. Said Good: “If nobody in Rappahannock complies with the mask mandate, they can’t stop everyone. If I was ya’ll, I’d say none of ya’ll wear a mask. What are they gonna do? They’re still going to have school.”

Rep. Madison Cawthorn (R-NC) promised voters at an event in North Carolina that when Republicans regain power, he is going to make sure Dr. Anthony Fauci is prosecuted. For what?

Former President Trump released a statement on the death of former Secretary of State Colin Powell:

Wonderful to see Colin Powell, who made big mistakes on Iraq and famously, so-called weapons of mass destruction, be treated in death so beautifully by the Fake News Media. Hope that happens to me someday. He was a classic RINO, if even that, always being the first to attack other Republicans. He made plenty of mistakes, but anyway, may he rest in peace!

Former President Trump blasted Sen. Bill Cassidy (R-LA) on Monday after the senator said in an interview he would not vote for him if he ran for president again in 2024, The Hill reports.   Trump called Cassidy a “RINO” who had “begged” for his endorsement in 2020 “and used it all over the place to win re-election.”  Said Trump: “Now, Wacky Bill Cassidy can’t walk down the street in Louisiana, a State I won by almost 20 points. He could not even be elected dog catcher today, the great people curse him.”

Bob Woodward published what may have been the last interview with former Secretary of State Colin Powell, who died yesterday.   Said Powell: “I’ve got multiple myeloma cancer, and I’ve got Parkinson’s disease. But otherwise I’m fine.”

He added: “Don’t feel sorry for me, for God’s sakes! I’m 84 years old. I haven’t lost a day of life fighting these two diseases. I’m in good shape.”

Powell on Afghanistan: “I thought we had to get out of there eventually,” Powell said. “[We] can’t beat these guys. Well, let’s get it over with. Afghanistan, you’re never going to win. Afghans are going to win.”