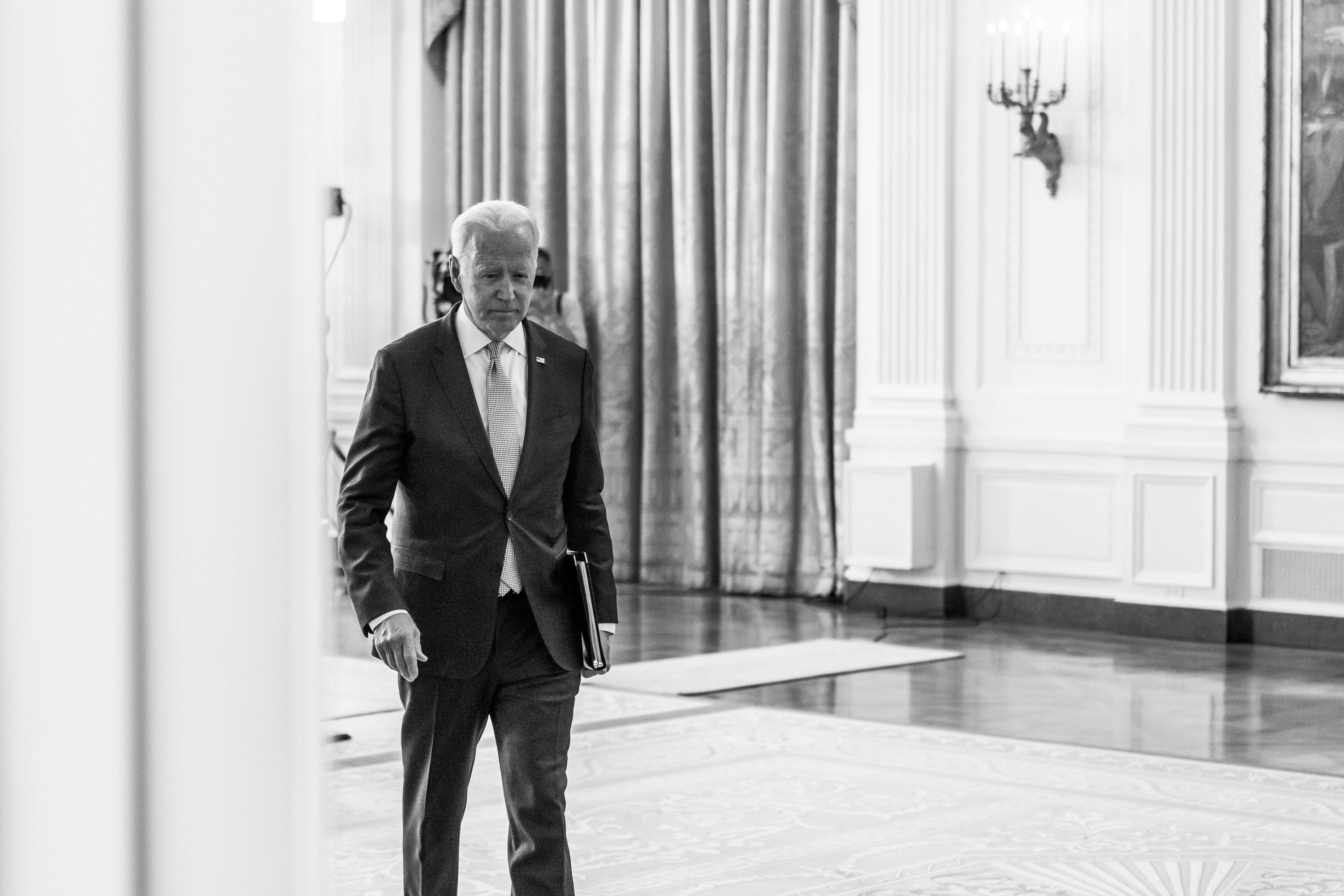 “The clock is ticking for President Biden and White House officials to broker an agreement among congressional Democrats on the president’s economic agenda as patience in some corners wears thin,” The Hill reports.

Dan Balz: “At some point, it will be the president’s call, in consultation with Pelosi and Schumer, to settle on something and persuade all sides to get behind it. He has shown patience or passivity, depending on the perspective, but the time for choosing is not far into the future…”

“After Biden sells his own party on the final shape of the package, he will then need to keep selling it to the public. Then he’ll need to show that has delivered results they can feel and not just a number.”

NBC News: “If Democrats don’t get their act together soon on President Joe Biden’s ‘Build Back Better’ plan, they will sink their own agenda and put their hold on power at greater risk.”

New York Times: “It remains unclear which sacrifices will have to be made, with lawmakers still at odds over the best strategy for paring down the plan, let alone how to structure specific programs. The most potent plan to replace coal and gas-fired plants with wind, nuclear and solar energy, for example, is likely to be dropped because of Mr. Manchin’s opposition, but White House and congressional staff are cobbling together alternatives to cut emissions that could be added to the plan…”

“Liberals remain insistent that the bill — initially conceived as a cradle-to-grave social safety net overhaul on par with the Great Society of the 1960s — include as many programs as possible, while more moderate lawmakers have called for large investments in just a few key initiatives.”

“In the midst of the impasse, rank-and-file lawmakers have been left to return home to their constituents to try to promote a still-unfinished product that is shrouded in the mystery of private negotiations, all while explaining why a Democratic-controlled government has yet to deliver on promises they campaigned on.”

Playbook: “Here’s the cold reality: It now appears all but impossible for Democrats to enact a reconciliation package that’s anywhere near as far-reaching as what polls suggest a large majority of Democratic voters want. And that effectively means that for a lot of Dems, it will be hard to see whatever ends up coming out of this process as a success — with potentially dire implications for the party in 2022.”

From Barack Obama’s A Promised Land, about the intraparty fighting on health care reform ahead of the 2010 elections: “By preemptively spinning what could be a monumental, if imperfect, victory into a bitter defeat, the criticism contributed to a potential long-term demoralization of Democratic voters — otherwise known as the ‘What’s the point of voting if nothing ever changes?’ syndrome — making it even harder for us to win elections and move progressive legislation forward in the future.”

“The most powerful part of President Biden’s climate agenda — a program to rapidly replace the nation’s coal- and gas-fired power plants with wind, solar and nuclear energy — will likely be dropped from the massive budget bill pending in Congress,” the New York Times reports.

“Sen. Joe Manchin, the Democrat from coal-rich West Virginia whose vote is crucial to passage of the bill, has told the White House that he strongly opposes the clean electricity program, according to three of those people. As a result, White House staffers are now rewriting the legislation without that climate provision, and are trying to cobble together a mix of other policies that could also cut emissions.”

Wall Street Journal: “While Mr. Manchin, as a critical centrist in the 50-50 Senate and the chairman of the Senate Energy and Natural Resources Committee, holds sway over the package and its energy components, other Democrats in both chambers have demanded that it include major climate provisions.”

“Some House and Senate Democrats, smarting from a move by Senator Joe Manchin, Democrat of West Virginia, to kill a major element of President Biden’s climate plan, are switching to Plan B: a tax on carbon dioxide pollution,” the New York Times reports

“A carbon tax, in which polluting industries would pay a fee for every ton of carbon dioxide they emit, is seen by economists as the most effective way to cut the fossil fuel emissions that are heating the planet.”

Washington Post: “White House officials are still looking at whether they can preserve the clean energy program by providing a way for coal and natural gas plants to keep operating for longer… Calls continued into the weekend between White House aides and climate experts, according to one of these individuals, who said it remains unclear if Manchin even supports some of the newer ideas that the administration has floated.”

Wall Street Journal: “As the Democrats who control Washington reshape a multi-trillion-dollar package that would expand the social safety net and boost green energy, a key question hanging over their efforts is what impact it will have on the economy…”

“There is no simple answer to what return Mr. Biden’s overall agenda would yield because it has so many different components and it could take decades to fully gauge their effectiveness. Eight decades on, economists are still divided over Franklin D. Roosevelt’s New Deal.”

“Moreover, not all the intended benefits of the reconciliation bill, such as improving the quality of life for families, narrowing inequality, slowing global warming and expanding healthcare, can be measured with GDP.”

Washington Post: “Voting rights advocates meet once every week or two with White House officials via video conference, and in almost every session, an advocate speaks up to say that President Biden must do more, that American democracy is under threat and the president is not meeting the challenge.”

“At one such meeting earlier this year, a Biden aide responded that Democrats would simply have to ‘out-organize’ the other side, according to multiple advocates familiar with the exchange who spoke on the condition of anonymity to describe a private meeting. The comment infuriated advocates, who believe they are watching former president Donald Trump actively and perhaps permanently undermine faith in U.S. elections.”

Politico: “Dozens of immigration advocates walked out, virtually, on top Biden officials Saturday in protest of the administration’s decision to continue border policies enacted during the Trump administration.”

“For years it was easy to cover ‘both sides’ — Republicans and Democrats — as equally worthy, and blameworthy, partners in democracy. While we reporters had come of age as witnesses to the unprecedented resignation of a Republican president who’d tried to corrupt the institutions of government to affect an election — imagine! — what remained was a Republican Party still capable of a creditable role in a healthy two-party system. After all, Richard M. Nixon was forced to resign when congressional leaders of his party began abandoning him. Again, imagine that, Kevin McCarthy.”

“Now, when reporters or pundits use the words “both sides” in regard to some political problem, I stop reading or listening.”

“China tested a nuclear-capable hypersonic missile in August that circled the globe before speeding towards its target, demonstrating an advanced space capability that caught US intelligence by surprise,” the Financial Times reports,

“The missile missed its target by about two dozen miles, according to three people briefed on the intelligence. But two said the test showed that China had made astounding progress on hypersonic weapons and was far more advanced than US officials realized.”

Said a fourth person: “We have no idea how they did this.”

“International travelers fully vaccinated against the coronavirus who have been barred from entering the United States during the pandemic will be able to enter the country on Nov. 8, marking an end to restrictions that had walled off tourists and relatives seeking to visit their families,” the New York Times reports.  “Unvaccinated foreigners will be broadly barred from entering the United States, although the White House official said there will be limited exemptions, including for young children.”

“Many Democrats are willing—even eager—to enact tax increases on high-income households and big businesses and campaign on them in next year’s midterm elections, embracing a stance that the party has struggled with in the past,” the Wall Street Journal reports.

“Although Democrats’ slim majorities have forced them to abandon some of their most sweeping tax proposals, President Biden and congressional Democrats are still seeking to raise about $2 trillion over a decade from businesses and high-income households.”

“Sen. Kyrsten Sinema (D-AZ) raised more campaign money in the last three months than in any quarter since she became a senator,” Politico reports.

“And she hit that $1.1 million haul with a big assist from the pharmaceutical and financial industries, whose political action committees and top executives stuffed her coffers in the middle of negotiations on Democrats’ massive infrastructure and social spending bills.”

“One of the biggest problems with inflation right now is not the ships stuck at the Port of Los Angeles or the price of a pack of chicken thighs or even how difficult it is to nab a reasonably priced rental car — it’s what’s happening in Americans’ minds as their expectations shift about how much goods will cost going forward,” the Washington Post reports.

“While policymakers debate how long higher prices will last — what ‘transitory’ inflation means — the real question is how American families and businesses are going to react to this new era of uncomfortable inflation. What is the psychological impact of this jump in so many prices after years of low inflation? Are people’s behaviors going to shift?”

House Majority Leader Steny Hoyer (D-MD) signaled in a letter to colleagues that the House may soon consider legislation to “remove” a debt limit threat, saying a vote could come as soon as this month, The Hill reports.

Said Hoyer: “The House will explore options to remove the threat that the debt limit poses over the long term, now that Republicans have demonstrated a willingness to weaponize it for partisan purposes. The House may consider legislation as early as this month to do so.”

Fox News host Tucker Carlson mocked Transportation Secretary Pete Buttigieg for taking paternity leave.  Said Carlson: “Pete Buttigieg has been on leave from his job since August after adopting a child. Paternity leave, they call it. Trying to figure out how to breastfeed, no word on how that went.”

President Biden said Friday that the Justice Department should prosecute those who defy subpoenas from the Jan. 6 select committee, Axios reports.

CNN: “The President’s comments, the strongest yet from Biden on possible repercussions for those who refuse to cooperate with the select committee’s requests, upended days of discipline from the White House, which has sought to distance itself from the House’s expected criminal contempt referral against Steve Bannon.”

A Texas school district official was caught on an audio recording telling teachers if they kept books about the Holocaust in their classrooms, they would have to also offer “opposing” views in order to comply with a new state law.

“A group of Georgia high school students planned a protest after a video of their classmates waving a Confederate flag on campus began circulating. But before students were able to hold their demonstration, school administrators allegedly suspended the Black organizers,” Newsweek reports.

The Texas House of Representatives passed a bill that would bar transgender students from playing on school sports teams based on their gender identity, NBC Dallas-Fort Worth reports.