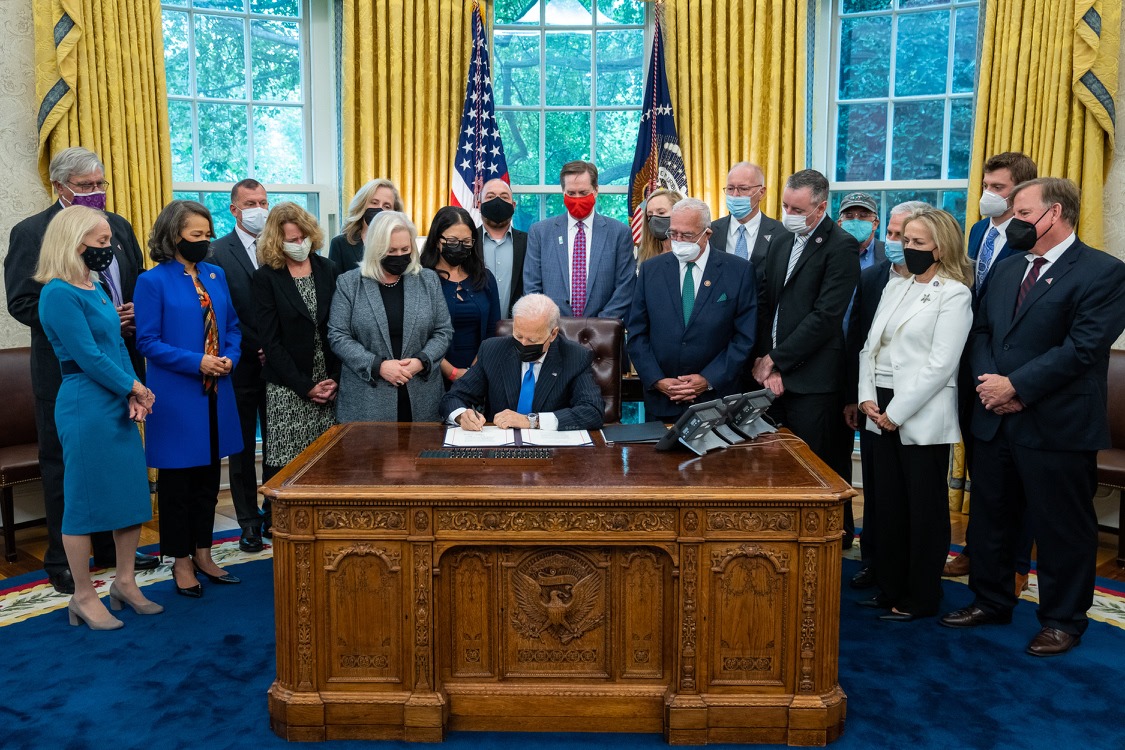 “But White House officials are still planning for the Kentucky Republican to climb down as yet another deadline approaches in December, after he convinced 10 Republican colleagues to break the logjam last week.”

“Inside the White House, aides don’t view McConnell’s insistence as a hard ‘no.’ Instead, they consider the recent vote in the Senate to raise the debt limit for two months a harbinger for the future, underscoring that Republicans could easily join Democrats through regular order if need be.”

The House Select Committee investigating the Capitol insurrection will meet next Tuesday to vote on a recommendation to cite Steve Bannon for criminal contempt and refer the case to the U.S. Attorney for prosecution.

Ars Technica: “For two years, he ran websites and Facebook groups that spread bogus stories, conspiracy theories, and propaganda. Under him was a dedicated team of writers and editors paid to produce deceptive content—from outright hoaxes to political propaganda—with the supreme goal of tipping the 2016 election to Donald Trump.”

“Through extensive efforts, he built a secret network of self-reinforcing sites from the ground up. He devised a strategy that got prominent personalities—including Trump—to retweet misleading claims to their followers. And he fooled unwary American citizens, including the hacker’s own father, into regarding fake news sources more highly than the mainstream media.”

“Pundits and governments just might have given Russia too much credit, he says, when a whole system of manipulating people’s perception and psychology was engineered and operated from within the US.”

“With the Afghan government and economy starved of cash, the Taliban are pressing their claim to the roughly $8 billion in Afghan foreign reserves that have been frozen by the U.S.,” Axios reports.

“Afghanistan is barreling into a humanitarian crisis, and donor countries and international institutions have cut off the aid that accounted for some 75% of the previous government’s budget.”

Washington Post: “The Biden administration is prepared to reimplement the Trump-era border policy known as the Migrant Protection Protocols in mid-November if the Mexican government agrees to accept the return of asylum-seekers to its territory.”

Wall Street Journal: “Nearly 40% of U.S. households said they faced serious financial difficulties in recent months of the Covid-19 pandemic, citing problems such as paying utility bills or credit card debt, according to a recent poll. About one-fifth have depleted all of their savings.”

“U.S. households are struggling in many ways over a year into the coronavirus pandemic… Nearly 60% of households earning less than $50,000 a year reported facing serious financial challenges in recent months. Of those, 30% lost all of their savings.”

“Satellite images have revealed China is upgrading and reinforcing its airbases closest to Taiwan along its southeastern coast, indicating Beijing may be stepping up its plans to take the island by force,” the South China Morning Post reports.

Although it’s only October, “Christmas” was mentioned at least 106 times on Fox News programming in a 24-hour span.

As the Daily Beast notes, she entirely “ignores the fact that Covid-19 is airborne and spread through respiratory droplets, while HIV is passed through direct contact with certain bodily fluids, including blood and semen.”

“A county in southern Oregon says it is so overwhelmed by an increase in the number and size of illegal marijuana farms that it declared a state of emergency Wednesday, appealing to the governor and the Legislature’s leaders for help,” the Seattle Times reports.

McKay Coppins: “Of course, it’s easy to romanticize past eras of journalism. The families that used to own the bulk of America’s local newspapers—the Bonfilses of Denver, the Chandlers of Los Angeles—were never perfect stewards. They could be vain, bumbling, even corrupt. At their worst, they used their papers to maintain oppressive social hierarchies. But most of them also had a stake in the communities their papers served, which meant that, if nothing else, their egos were wrapped up in putting out a respectable product.”

“The 21st century has seen many of these generational owners flee the industry, to devastating effect. In the past 15 years, more than a quarter of American newspapers have gone out of business. Those that have survived are smaller, weaker, and more vulnerable to acquisition. Today, half of all daily newspapers in the U.S. are controlled by financial firms, according to an analysis by the Financial Times, and the number is almost certain to grow.”

Michigan state Rep. Daire Rendon (R) wore a button to an election “audit” rally “that featured an American flag with a gold ‘Q’ on it, a letter that has become a symbol for a right-wing conspiracy theory movement,” the Detroit News reports.

Miami Mayor Francis Suarez said it’s “a major priority” for the city to be able to pay government employees in Bitcoin, Bloomberg reports.  Said Suarez: “I want us to differentiate ourselves as a crypto capital of the United States or of the world.”

NBC News interviewed three of the original Havana Syndrome victims.   Said one career foreign service officer: “I felt like I was being struck with something. Pain that I have never felt before in my life … mostly in my head and in my eyes. … It was as if I had been seized by some invisible hand and I couldn’t move.”

“Nine months have elapsed since metal detectors were installed outside every entrance to the House Chamber, spurred by the trauma of the January 6 assault on the U.S. Capitol and fears of Republicans bringing guns onto the floor,” Insider reports.  “But now, even some Democrats have grown tired of their presence.”