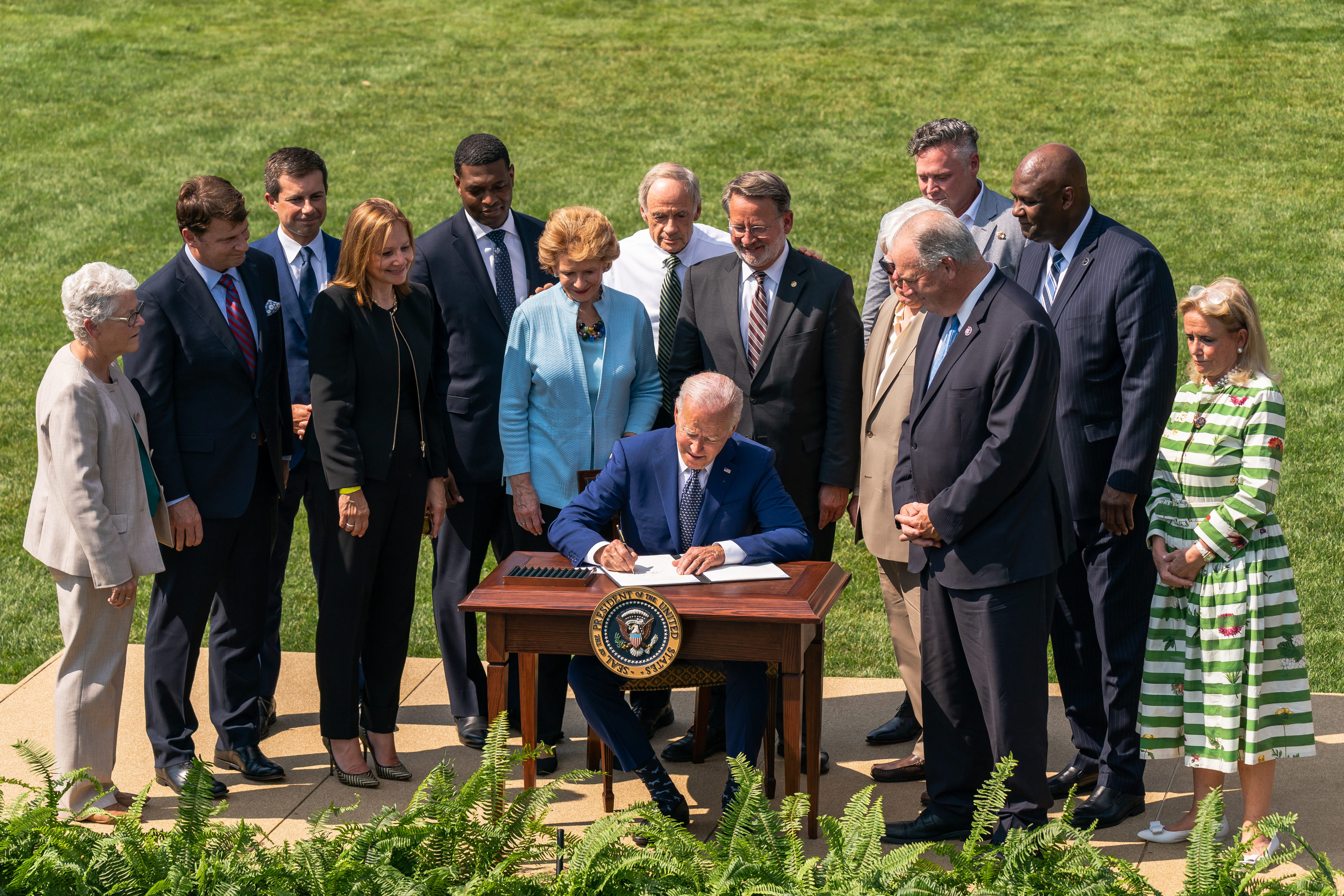 A new Data for Progress poll in Arizona finds 70% of prospective 2024 Democratic primary voters have a negative opinion of Sen. Kyrsten Sinema (D-AZ), with just 24% expressing a positive view of the first-term senator.

For contrast, 85% of Democratic primary voters have a favorable opinion of Sen. Mark Kelly (D-AZ), who is also in his first term.

Gallup: “Americans have shifted back to favoring a more hands-off approach for government in addressing the nation’s problems after a rare endorsement of a more active role last year. Currently, 52% say the government is doing too many things that should be left to individuals and businesses, while 43% want the government to do more to solve the country’s problems.”

“In contrast, a record-high 54% of U.S. adults last year said the government should do more to solve problems.”

“It looks like Ron Watkins, a prominent figure in the QAnon movement who many believe is Q himself, filed paperwork indicating he might run for Congress from Arizona on Thursday,” Vice News reports.

“A group of anti-Trump Republicans on Thursday endorsed a slate of Democrats and centrist Republicans in the 2022 midterms to fight against the former president’s hold on the party,” The Hill reports.

OREGON GOVERNOR — “After 37 years at The New York Times as a reporter, high-level editor and opinion columnist, Nicholas Kristof is leaving the newspaper as he considers running for governor of Oregon,” the New York Times reports.

WASHINGTON DC MAYOR — Two members of the Council of the District of Columbia, Robert White and Trayon White, each said Wednesday that they would run for mayor next year against Mayor Muriel Bowser, a fellow Democrat who the Washington Post says is expected to run for a third term.

Of the two challengers (who do not appear to be related), Robert White appears to start out with considerably broader appeal than Trayon White, who made national news in 2018 when he launched an antisemitic rant accusing the Rothschild family of controlling the weather. It only takes a plurality to win the June Democratic primary in D.C., which is tantamount to election in what has long been one of the bluest jurisdictions in the entire country.

At home, a July poll from the Gotham Research Group for the DC Police Union gave the mayor a 71-23 favorable rating, which are the type of numbers that would normally defer most prominent opponents. However, DCist’s Martin Austermuhle writes that Bowser “has tended to lack a political base that is passionate about her.” Austermuhle notes that several of her Council allies have lost over the last few years, while Bowser led a failed 2018 attempt to defeat one of her critics.

While Bowser has not yet revealed her 2022 plans, local politicos widely expect her to run again. “There’s just no reason to announce early,” an unnamed advisor told Axios last week, adding, “We know she can raise money. She has name recognition.” Bowser would be the district’s first three-term executive since the late Marion Barry, whose political survival still bedevils many outside observers.

Robert White, who holds an at-large Council seat, didn’t criticize Bowser directly when he launched his campaign Wednesday, but he argued, “​​The systems of government are showing their age and that means that we need the type of leader who’s going to dig deep into government, hold it accountable and be ambitious.” White further added that the city’s growth was leaving plenty of Washingtonians behind, saying, “Our population is dwindling. Black and Brown kids are struggling in our schools. Parents of young kids are leaving this city in droves.”

The Washington Post writes that White has been “a stalwart of the legislature’s growing left-leaning wing,” which has often brought him into conflict with the more-moderate Bowser. Notably, the paper says he passed laws to increase taxes on the wealthy and create paid parental leave, and he’s also called for spending less money on the police. Austermuhle adds that White performed well last year in both heavily Black and white areas, which demonstrated “citywide appeal that eludes many candidates.”

Colleague and rival Trayon White, meanwhile, is no stranger to criticism. While his antisemitic 2018 comments and disastrous trip to the U.S. Holocaust Memorial Museum earned him the most attention outside of D.C., he also made news last year when he announced he wouldn’t encourage his constituents to get vaccinated for COVID-19. White, who initially refused to say if he had been vaccinated (Update: He later revealed he had been), was earlier this month the only no vote against a vaccine mandate for council members and staff.

White, though, has proved popular at home in Ward 8, a heavily Black constituency that none other than Barry represented until his death in 2014. White has been an ardent critic of gentrification and gun violence, and he’s well known for using social media for constituent outreach. Last year, during the early weeks of the pandemic, he also personally delivered supplies to constituents and broke up non-socially distanced groups. Months later, White won renomination 58-27.

White, characteristically, broke the news of his mayoral campaign on Instagram after another user responded to a post about Robert White’s candidacy by saying that “@trayonwhite needa be mayor.” The Ward 8 council member wrote, “I’m running,” and he soon confirmed to Washington City Paper that he was indeed in.

Trayon White didn’t say more about his campaign, texting, “​​Got some things I’m considering and working out,” but he hasn’t been shy about going after the Bowser administration before. White recently responded to an audit revealing that the district didn’t spend the legally designated amount on building homes for residents in the lowest income bracket by writing, “The administration doubled down on the misspending and a lot of people got richer while poor families remained homeless and hopeless.”

VIRGINIA GOVERNOR — Glenn Youngkin (R) wouldn’t say whether he wants former President Donald Trump to campaign for him in the final weeks of Virginia’s gubernatorial election and distanced himself from a controversial right-wing rally supporting his candidacy the night before, NBC News reports.

Donald Trump spent Wednesday night calling into a rally in support of Republican Glenn Youngkin, and Democrat Terry McAuliffe has already turned footage into an ad. The audience hears Trump saying, “Glenn Youngkin is a great gentleman. I hope Glenn gets in there, and he’ll do all of the things that we want a governor to do.” The spot then replays old footage of Youngkin declaring, “I was honored to receive President Trump’s endorsement.”

Youngkin, for his part, said Thursday he wasn’t involved with that “Take Back Virginia Rally” Trump virtually took part in, which the candidate didn’t attend. When asked if he’d like Trump to campaign for him in person, Youngkin also declined to provide an answer.

ALASKA GOVERNOR — While there was some speculation that former state cabinet member Mike Navarre could run as a Democrat against Republican incumbent Mike Dunleavy, Navarre is instead backing his old boss, former independent Gov. Bill Walker.

NEW YORK GOVERNOR — EMILY’s List has endorsed Gov. Kathy Hochul ahead of what could be a competitive 2022 Democratic primary to keep her new post. One of her possible intra-party foes is Attorney General Letitia James, whom EMILY supported in 2018.

IOWA U.S. SENATOR — Retired Vice Adm. Mike Franken confirmed Thursday that he would seek the Democratic nomination to take on Republican Sen. Chuck Grassley. Franken will go up against former Rep. Abby Finkenauer in the primary ahead of what will be a difficult general election for Team Blue.

Franken ran for Iowa’s other Senate seat last year in a campaign where he was also the underdog. Franken’s main intra-party foe, businesswoman Theresa Greenfield, had the backing of the national Democratic establishment and benefited from close to $7 million in outside spending for the primary. Greenfield ended up winning the nomination 48-25 before losing to Republican Sen. Joni Ernst months later.

TENNESSEE 9TH CD — Democratic Rep. Steve Cohen on Thursday unambiguously denied that he was considering retiring, a proclamation that came the day after Kentucky Rep. John Yarmuth suggested he was thinking about leaving the House.

Yarmuth, a fellow Democrat who himself announced Tuesday that he would not seek re-election, told WLKY the next day, “You know my best friend in the house, Steve Cohen from Memphis, he’s agonizing over whether to run right now because he said ‘I’m going to lose my best friend,’ and that’s kind of how many of us feel.”

Punch Bowl News’ Jake Sherman went on to tweet Yarmuth’s words out, which led Cohen to reply, “To paraphrase Bernard Baruch / The reports of my retirement have been greatly over exaggerated.” Sherman tweeted back, “Are you considering retiring ?” to which Cohen simply wrote, “No.” Cohen previously said in 2019 that he’d keep running through 2022.

RHODE ISLAND GOVERNOR — Former CVS Health executive Helena Foulkes on Wednesday became the latest candidate to announce a Democratic primary challenge against incumbent Dan McKee, who was elevated from lieutenant governor to governor in March when Gina Raimondo resigned to become secretary of commerce. Secretary of State Nellie Gorbea, Treasurer Seth Magaziner, and former Secretary of State Matt Brown are also competing in a contest where it takes just a simple plurality to win the Democratic nod.

Foulkes is the niece of former Connecticut Sen. Chris Dodd and is close to Raimondo, but she’s never run for office before. WPRI’s Ned Nesi, though, writes that the new candidate likely can self-fund, noting that she took a nearly $30 million pay package in 2019 during her brief time running Hudson’s Bay Co.

NEW MEXICO GOVERNOR — Democratic Gov. Michelle Lujan Grisham reported raising $2.5 million between April 6 and Oct. 4, putting her far ahead of the Republican pack. Her nearest GOP competitor was state Rep. Rebecca Dow, who took in $440,000, though $106,000 was a transfer from her legislative campaign. Retired Army National Guard Brig. Gen. Greg Zanetti, meanwhile, took in $154,000 and loaned himself $185,000. Lujan Grisham also has a dominant advantage in cash-on-hand, with $2.1 million in the bank.

MISSOURI U.S. SENATOR — Disgraced former Gov. Eric Greitens has released a Fabrizio Lee internal that gives him a 36-17 lead over Attorney General Eric Schmitt in next year’s Republican primary, with Rep. Vicky Hartzler in third with 10%. That’s actually a big slip for Greitens, though, from his 48-11 advantage over Schmitt in March; that poll was taken when the field to succeed retiring Sen. Roy Blunt was only starting to take shape and tested some politicians who didn’t end up running while leaving out some eventual candidates like Hartzler.