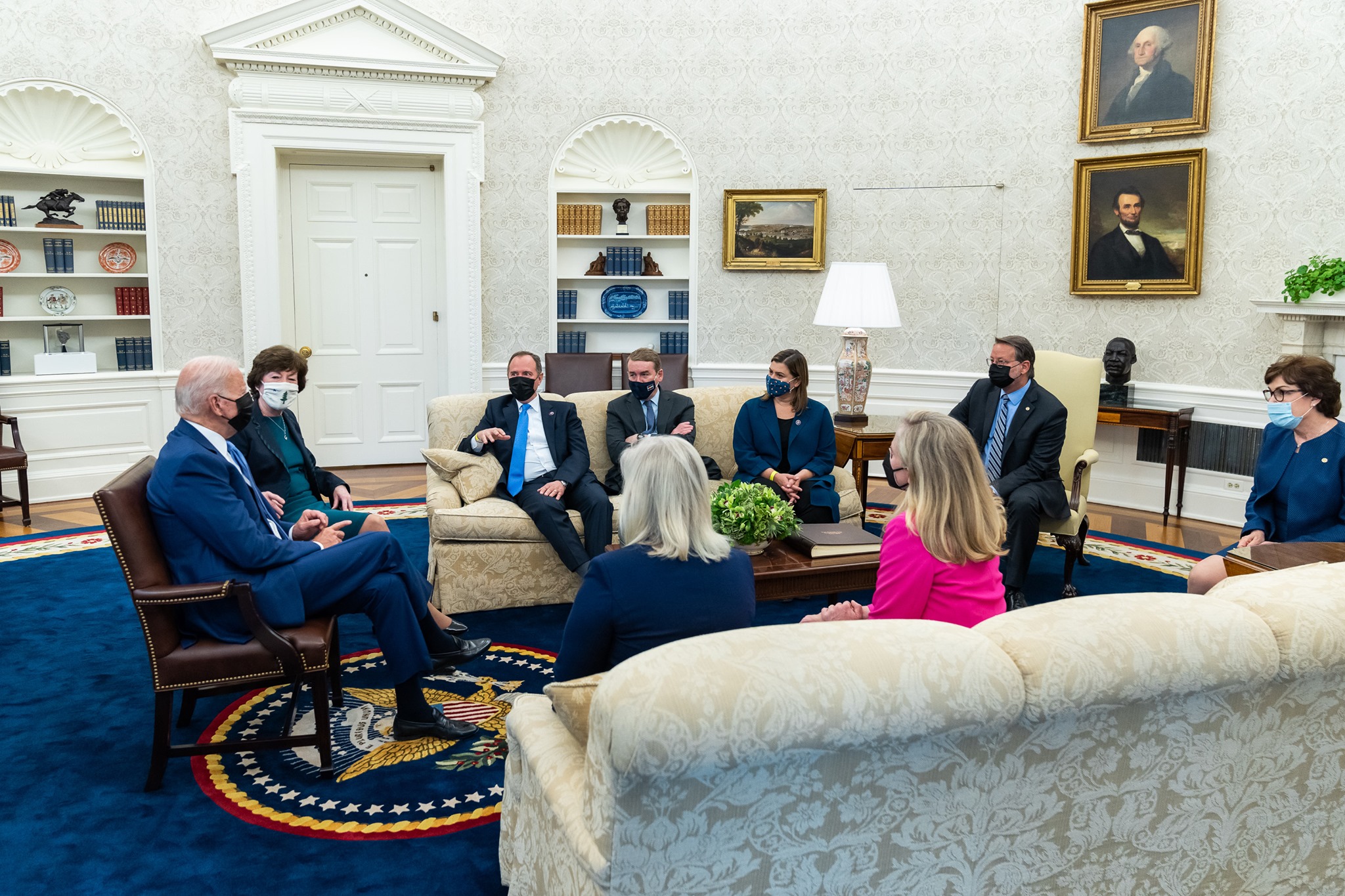 Punchbowl News: “Pelosi is in deal mode, you can see it, but the rest of her party isn’t there yet. Pelosi has been trying to mediate a compromise between her moderate and progressive factions. She’s been upping the pressure on both groups, urging them to find common ground. It hasn’t worked so far. But, to be fair to Pelosi, it never works until the moment it does.”

“That’s because Pelosi is a realist. She knows something is better than nothing. She’s also keenly aware that the clock is ticking and an agreement has to be reached very soon. It will take weeks to turn any bicameral deal into actual legislative text, and there undoubtedly will be more haggling along the way. Getting a reconciliation package through Congress by Thanksgiving would be an achievement at this point; Christmas feels more doable. And Democrats will be forced to respond to the new debt limit and government funding deadlines by that point.”

CNN: “Manchin roundly rejected calls by Democrats to include aggressive climate measures — namely to substantially slash greenhouse gas emissions by 2030. He said the goal laid out by the White House to cut greenhouse emissions by half in that timeframe simply would not happen.”

“The Democrats’ most significant attempt to rein in health care costs in the private market— specifically prescription drug costs — is increasingly likely to fail,” Axios reports.  “U.S. health care costs have ballooned over the last few decades. But there’s fierce industry resistance to allowing the government to step in and regulate private market prices. Plenty of lawmakers hate the idea as well.”

Daily Beast: “For many people both inside and outside the Beltway—who are hanging on her every maneuver around President Joe Biden’s legislative agenda—Sinema is a mystery. And for people who once considered themselves her allies, friends, and confidants, the senator is now mostly a black box to them, too.”

Ron Brownstein: “It’s common now for Democrats to argue that the agenda they are struggling to implement on Capitol Hill represents the party’s most ambitious since the ‘Great Society’ Congress convened in 1965. That’s a reasonable assessment—but one that the party today should consider as much a warning as an inspiration. Under the relentless prodding of President Lyndon B. Johnson, the Democratic-controlled House and Senate passed landmark legislation at a dizzying pace during that legendary 1965–66 legislative session…”

“Then, suddenly, when the work of the 89th Congress was finally finished, Democrats lost 47 seats in the House and three in the Senate during the midterm election of 1966. The Democrats’ bitter disappointment is a cautionary tale for their party descendants hoping to materially improve their odds in next year’s midterm contest by reaching agreement on the sweeping economic bills that have divided the party for months.”

“The lesson of history is that it is extremely difficult for presidents to translate legislative success in their first year into political success in the midterm elections of their second year. Those early achievements can boost presidents in their reelection bids, but in almost all cases they have not proved an antidote to the other midterm factors that cause the president’s party to lose ground in Congress.”

A British lawmaker from the Conservative Party died after being stabbed multiple times in an attack, the BBC reports.  The Guardian has the latest.

Washington Post: “Former president Donald Trump has in the past week threatened electoral defeat for Republicans who dismiss his election falsehoods, inserted himself into the Virginia governor’s race to the delight of Democrats, and promised to root out disloyal GOP officials in legislative primaries in Arizona and Michigan.”

“With more than a year to go before the midterm elections, the former president is leaving no corner of the party untouched as he moves to assert his dominance, both in public and behind the scenes. His stepped-up efforts create a conundrum for many of the party’s strategists and lawmakers, who believe they could have a banner election year in 2022 if they keep the focus on President Biden and his agenda.”

“A federal appeals court on Thursday said Texas’s restrictive abortion law can remain in effect during ongoing litigation with the Justice Department, extending a previous temporary order that kept the law in place,” the Wall Street Journal reports.

“The order, from the New Orleans-based Fifth U.S. Circuit Court of Appeals came on a 2-1 vote and postpones the effect of an Oct. 6 ruling from an Austin federal judge. He said Texas had engaged in an unprecedented effort to deprive women of constitutionally protected abortion rights and keep its restrictions shielded from judicial review.”

“The Department of Justice said Friday that it will go back to the Supreme Court to request that it put on hold Texas’s restrictive abortion law while legal battles continue,” the Washington Post reports.  “In a different case, the Supreme Court last month allowed the law to go into effect on a divisive 5 to 4 vote.”

Susan Glasser: “The bottom line is that the story of the Trump Presidency still has important unanswered questions that the forthcoming pile of books cannot answer. And they have an urgency about them that unanswered questions about past Administrations usually don’t, given the ongoing threat to our democracy: Trump is not only preparing to run again but is determined to mold the G.O.P. into a single-issue Party, the ideology of which consists solely of disputing the legitimacy of the election that turned him out of office.”

“The Trump Presidency is not yet, alas, simply a matter for booksellers and book writers; it’s an active crime scene.”

Frank Bruni: “A seemingly infinite volume of words has been lavished on the fight between progressives and moderates in the Democratic Party, and that’s largely warranted. It’s a real battle. It’s a meaningful one. And the side that President Biden comes down on will certainly affect his and his party’s fortunes.”

“But there’s a larger issue — a question — that links those circumstances and overarches this perilous juncture in the first year of his first term. It, more than anything else, explains the plummet of his approval rating. It looms large for that small minority of voters without ironclad allegiances to either the Democratic or Republican parties.”

“They’re wondering this: Just how competent, really, is Biden? Just how knowledgeably and confidently in charge? I don’t mean neurologically, which I hasten to clarify, lest right-wingers suffering from Biden Derangement Syndrome disingenuously repurpose my comments. I mean administratively, legislatively, politically. And voters’ misgivings about that could be disastrous for him and for America — which cannot afford another go-round with Donald Trump or any of his coddlers — because they concern and corrode the very case that Biden made for his presidency.”

“A federal judge in Washington has repeatedly sentenced people who stormed the U.S. Capitol to more prison time than prosecutors sought, saying that even people who were not violent should face consequences for joining the unprecedented assault,” Reuters reports.

Katie Couric admits in her new memoir to “protecting” Justice Ruth Bader Ginsburg from public backlash by cutting out negative comments she made about people who kneel during the national anthem, the Daily Mail reports.

Couric claims Ginsburg said in an interview that those who kneel during the national anthem are showing “contempt for a government that has made it possible for their parents and grandparents to live a decent life.”

“The natural gas shortage that drove prices to records in Europe has exposed Russia’s rising leverage over global energy markets, with Moscow now playing a key role in everything from OPEC negotiations to coal exports to China,” the Wall Street Journal reports.

Financial Times: Putin’s gas war with Europe is far from over.

Washington Post: “Even before the pandemic upended school, test scores in both reading and math declined for 13-year-old students, the first drop registered in a half century in testing meant to measure student proficiency over time.”

“The data showed declines among the lowest-performing students, but not those at the top, suggesting that educational gaps that pervade the U.S. system are becoming larger, not smaller.”

“Even as the Covid-19 pandemic forced companies around the world to reimagine the workplace, researchers in Iceland were already conducting two trials of a shorter work week that involved about 2,500 workers – more than 1% of the country’s working population,” Bloomberg reports.

“They found that the experiment was an ‘overwhelming success’ – workers were able to work less, get paid the same, while maintaining productivity and improving personal well-being.”

After nine months with no leader, President Biden is expected to nominate Robert Califf to lead the FDA, returning to the agency where he served as commissioner for less than a year at the end of the Obama presidency, the Washington Post reports.

The Kaiser Family Foundation estimates that about 90,000 deaths from Covid-19 over the past four months were entirely preventable.  Philip Bump: How many thousands of people are choosing death over vaccination?

“Former FBI Deputy Director Andrew McCabe, whom Donald Trump-era Attorney General Jeff Sessions fired hours before his retirement as the then-President’s political furor toward him grew, has settled a lawsuit with the Justice Department, allowing him to officially retire, recoup hundreds of thousands of dollars in legal fees and his pension,” CNN reports.

“A bipartisan White House commission agreed that Congress has the legal power to expand the Supreme Court — but the group was divided on whether lawmakers should actually do it,” CNBC reports.