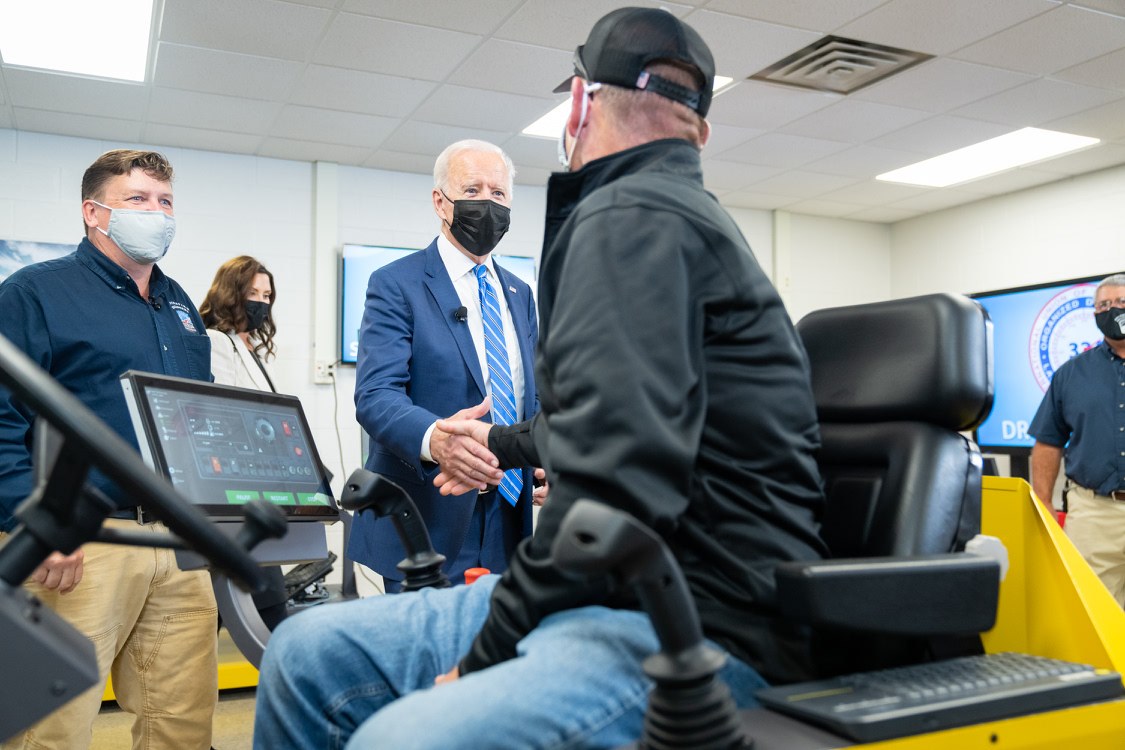 A new YouGov poll for CBS, the firm’s first of the contest, finds Democrat Terry McAuliffe leading Republican Glenn Youngkin 50-47 in next month’s open-seat race for governor in Virginia.

Meanwhile, a new Youngkin ad tries to claim McAuliffe would hike taxes by $5,400 on the average Virginia family, but as the Washington Post’s Dave Weigel notes, the argument is based on a report put out by a conservative think-tank that was then picked up by a conservative news site that was then syndicated by Yahoo News. It’s this laundered version of the initial report that Youngkin’s ad cites, visibly showing the Yahoo News logo throughout the ad, as though to suggest it was independently published by the outlet’s news arm. (Why Yahoo allows its brand to be tarnished in this way is a different matter.)

Punchbowl News: “What happens in Virginia will have a big impact on Biden’s presidency. It may or may not be a harbinger of what’s to come in 2022, but it will certainly impact lawmakers’ behavior in the short term. Members of Congress aren’t always logical actors, and we may see some of that behavior in the weeks and months to come.”

“Prominent Democrats from across the country are mobilizing to try to lift Terry McAuliffe to victory in the final weeks of the Virginia governor’s race, a critical election that has put Democrats on edge and carries significant national ramifications for the party,” the Washington Post reports.

“Former president Barack Obama will hit the campaign trail for McAuliffe later this month as part of an effort to boost turnout among Black voters. So will Stacey Abrams, a rising Democratic star from Georgia, and Keisha Lance Bottoms, the mayor of Atlanta. First lady Jill Biden will also stump for McAuliffe, while House Speaker Nancy Pelosi (D-CA) will host a fundraiser for the gubernatorial hopeful.”

Vanity Fair: “Picture this: You’re the head of marketing at a potato chip company and you’re reissuing the brand’s original flavor in the hopes of boosting holiday sales. One day your team receives an email from Adolf Hitler’s great-great-nephew, who says he wants to help the campaign by filming a short video declaring that the chips in question were ‘Uncle Adolf’s favorite,’ with a little anecdote about how he ‘actually invaded Poland because someone set him off by eating the last bag in his stash.’”

“You’d probably want to do everything in your power to ensure this didn’t happen, as it wouldn’t be ideal for your product to be associated with one of the worst people in history, right? If you’re vigorously nodding your head in agreement, you now have an idea of how Senate Republicans feel re: Donald Trump being the face of the party in the next midterm and presidential elections.”

“A judge dismissed a lawsuit Wednesday by Donald Trump supporters who sought to inspect absentee ballots from last year’s presidential election, a decision that came a day after Georgia investigators told the court they were unable to find any counterfeit ballots,” the Atlanta Journal Constitution reports.

“There were no indication of ‘pristine’ ballots with perfectly filled-in ovals and no creases, as alleged in the lawsuit. All ballots in those batches appeared to be authentic.”

“A pro-Trump political group has agreed to pay $25,000 to settle allegations it illegally solicited $2 million from reporters posing as intermediaries for a Chinese national,” Axios reports.

“A key player in the scheme, a veteran Republican operative, is facing criminal charges over allegedly funneling tens of thousands of dollars in foreign cash to Trump’s re-election effort, making news of the fine the latest in an emerging pattern of conduct.”

Aaron Blake: “One thing has become pretty clear in recent weeks: This plot was foiled in large part because the Justice Department and Vice President Mike Pence opted not to go along with it. But what if they had? Or what if Trump had followed through on firing acting attorney general Jeffrey A. Rosen and replacing him with the Justice Department official who was willing to do his bidding, Jeffrey Clark?”

“It’s worth walking through some scenarios (with an assist from our trusty timeline).”

Georgia U.S. Senate candidate Herschel Walker (R) “canceled a fundraiser with a conservative film producer who until Wednesday used a rendering of a swastika as her Twitter profile picture,” the Atlanta Journal Constitution reports.

The campaign initially contended the symbol wasn’t a swastika but a sign of opposition to vaccine requirements.

Former Sen. Jeff Flake, a Republican who’s now President Biden’s nominee to be ambassador to Turkey, is funding a nonprofit focused on election processes in his home state of Arizona, Axios reports.

Sen. Tim Scott (R-SC) “took in nearly $8.3 million during the third fundraising quarter, a major sum that highlights the massive finance network Scott is building ahead of a prospective 2024 presidential bid,” Politico reports.

“Scott has emerged as a fundraising powerhouse over the past year, winning over small- and large-dollar GOP donors alike. The senator, who is a heavy favorite to win reelection in 2022, has seen his profile rise since delivering the Republican Party’s response to President Joe Biden’s joint address to Congress in April. Scott has raised nearly $20 million over the course of the year and got support from over 82,000 donors during the third quarter.”

The event kicked off with the Pledge of Allegiance — to a flag that was present at the Capitol insurrection.

Karen Tumulty: “A raft of evidence suggests that female voters, whose engagement and activism fueled the gains that Democrats made during Donald Trump’s presidency, are increasingly tuning out politics.”

“In one survey conducted in May by the Democratic super PAC American Bridge 21st Century, nearly half of women in key swing states said they were ‘paying less attention to what happens in Washington’ than they were when Trump was in the White House. This was particularly true among female Biden voters who are independents, under the age of 35, college graduates and city dwellers. Focus groups that American Bridge 21st Century conducted in August with women in Pennsylvania and Arizona found much the same thing.”

David Graham: “Trump winning in 2016 was a serious wound to the American experiment. His clinging to power in 2020 poured salt in that wound. Trump losing in 2024 and trying to steal the election would be even more catastrophic. But a straightforward victory—a very real possibility—could be a mortal injury.”

Cook Political Report: “On Wednesday, Colorado’s independent redistricting commission released the nation’s first draft of a new congressional map for the 2022 cycle. The preliminary plan is subject to revision upon public feedback and final census data to be released this fall.”

“But contrary to initial reports of a GOP-friendly draft, a closer look reveals Democrats would be favored to expand their lead in the state’s House seats from 4-3 to 5-3.”

“The glaring errors became clear soon after a former Wisconsin judge issued subpoenas earlier this month in a Republican review of the state’s 2020 presidential election. Some of the requests referred to the wrong city. At least one was sent to an official who doesn’t oversee elections. A Latin phrase included in the demands for records and testimony was misspelled,” the Washington Post reports.

“Michael Gableman, the former judge leading the review, admitted days later that he does not have ‘a comprehensive understanding or even any understanding of how elections work.’ He then backed off some of his subpoena demands before reversing course again, telling a local radio host that officials would still be required to testify.”

“The latest round of reversals and blunders is intensifying calls to end the probe.”

Amy Walter: “There are two very important groups to watch in this upcoming midterm election. One is independent voters. In the last four midterm elections, independents had soured on the sitting president’s performance and preferred the ‘out’ party by double digits. In all four of those elections, the party in the White House lost the House, the Senate or both.”

“The other group to pay attention to is Democratic base voters, especially younger voters and voters of color who turned out for the first time in 2018 and 2020. Many of these so-called ‘surge’ voters were motivated by an aversion Donald Trump, and the racial justice protests over the summer of 2020. Democrats need these voters to show up again in 2022.”

The Economist finds that “precincts that map closely onto military bases found a median swing of nearly eight points towards Joe Biden in 2020, compared with a nationwide shift of a little over two points in the same direction.”